Mowgli Encounters a Pack of Dholes

When the elephants had finished bathing, they headed up the riverbank with Mowgli riding on the matriarch’s back. He felt calm and refreshed, at peace with himself and the world. The herd took its time entering the forest, feasting on bamboo and other grasses, as Mowgli listened to birdcalls that rang out on all sides – the shrill cry of a serpent eagle, circling overhead, the piping call of a pair of lapwings and the cawing of jungle crows, as well as the twittering of leaf warblers. Then amidst the chorus of birdsong he heard a muted whistle that immediately caught his ear. It was repeated several times and Mowgli listened attentively, trying to locate the sound. He knew it wasn’t a bird.

There were several different whistles, each of a varying pitch. The boy knew what animal made this sound and he could imitate the call by blowing through his pursed lips. The elephants also reacted to the whistles, cautiously raising their trunks to catch a scent, aware that a hunt was underway.

Mowgli heard the alarm cry of a chital. As the herd moved forward between the trees, his eyes scanned the jungle ahead of him for movement. Eventually, he spotted a flash of reddish fur racing through a lantana thicket. The whistles had now become more insistent, each piercing note punctuating the silence of the forest.

As the mother elephant pushed her way through a barricade of thorny shrubs, they came to an open patch of grass surrounding a seasonal waterhole. The ground was pockmarked with the hoof prints of deer and boar but the murky puddle in the centre had almost dried up. 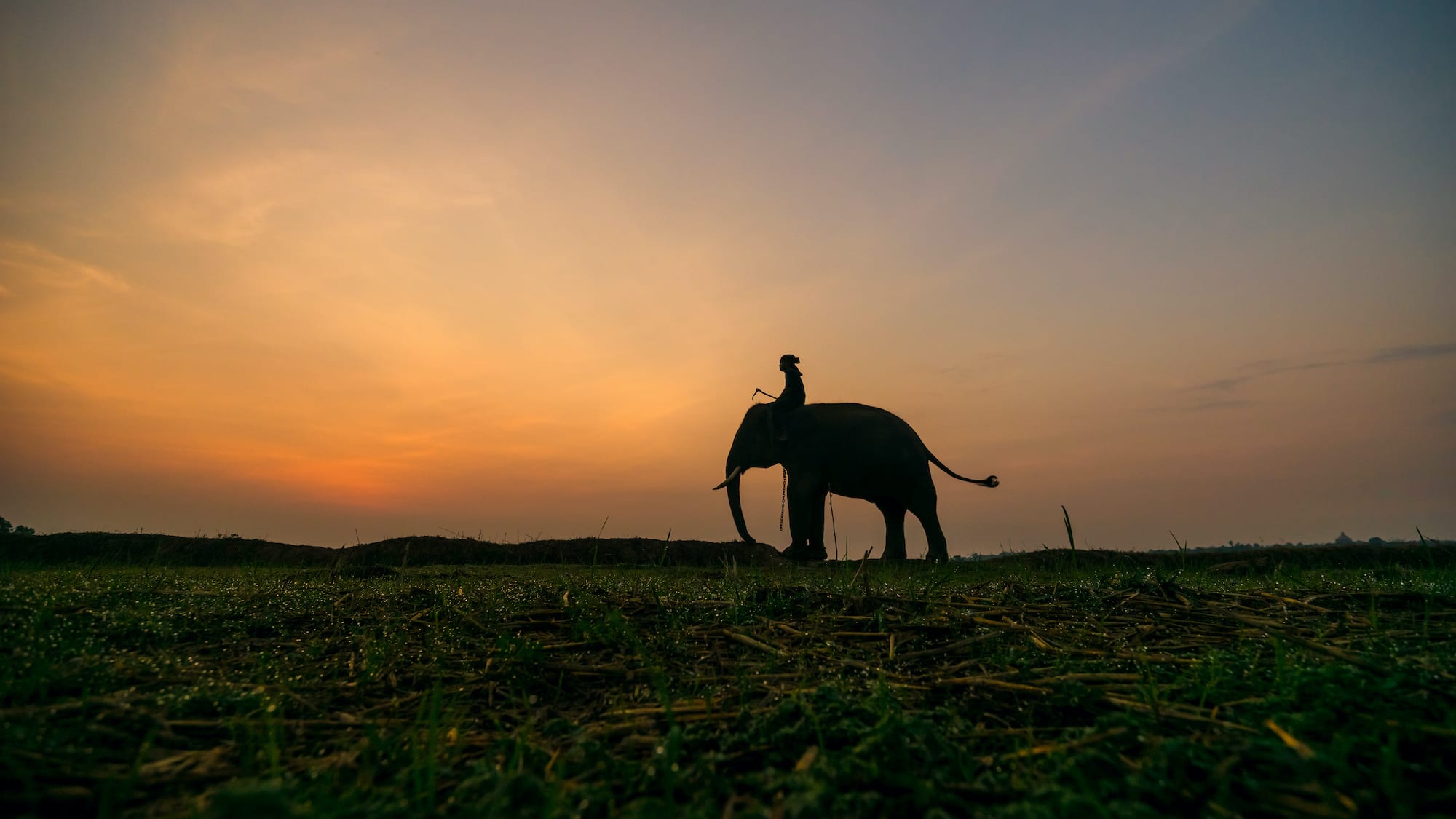 An elephant and its mahout at sunrise. Photo: Horizonman/Shutterstock

Suddenly, a small, agile creature with dusty red fur burst out of the grass to their right and gave a soft whistle. Mowgli knew that the dhole, or wild dog, was one of the most dangerous predators in the jungle despite its plaintive, fluting cry. Within minutes, the rest of the pack appeared on all sides of the waterhole. The elephants stopped in their tracks, though the wild dogs showed no interest in the herd. With their ears perked and tongues hanging out, all the dhole were staring in the same direction. Moments later, a chital doe and her fawn raced out of the trees, their tails raised in alarm. A pair of dhole were chasing after them and drove them towards the centre of the waterhole. Both the mother deer and her fawn looked terrified as their hooves sank into the mud, slowing them down. Within a few seconds the pack of wild dogs had encircled them and began closing in. The predators were silent now, no longer whistling, sharp eyes fixed on their prey.

Mowgli had seen wild dogs only twice before. The dhole were much smaller than the farmer’s dogs that had chased him away from the mango orchard, but when a pack of them hunted together they could kill animals as large as a sambar, running it down and biting its legs until the deer collapsed. Most of the wild animals in the forest were as frightened of these whistling hunters as they were of tigers and leopards.

The fawn made a terrified, bleating sound as it struggled in the deep mud, while the chital doe kicked one of the dogs that nipped at her hoof, frantically trying to keep it at bay.

Without thinking, Mowgli slid off the matriarch’s back, grabbing her ear as he dropped to the ground. She tried to stop him with her trunk but the boy was too quick, running forward and letting out his fiercest roar, though it hardly sounded threatening, more like the yawn of a bear.

Three of the dogs turned to look at him, startled by this unexpected intruder who had interrupted their pursuit of a meal. The rest of the pack were still intent on bringing down the deer but as Mowgli waved his arms and bared his teeth in a snarl, more of the dhole caught sight of him. When the boy darted around the muddy waterhole, the leader of the pack let out a whistle. Each of the other dogs replied with their hunting calls as they turned in his direction. Sensing that this was their only chance to escape, the chital and her fawn scrambled out of the mud and raced away into the trees. A few of the dogs began to chase them but it was too late and the pack quickly regrouped, focusing on Mowgli with eager eyes.

Until now the elephants had watched the dogs without any reaction, curious but content to keep their distance. However, seeing that the boy was alone and surrounded by more than twenty of the whistling hunters, the matriarch lifted her trunk and trumpeted loudly. The dhole ignored her. With the cunning and teamwork of the pack, they closed in on Mowgli and cut him off from the herd. Realizing that he could not reach the matriarch to climb on her back, the boy tried to race across to the nearest tree but found his way blocked by a pair of dhole that had circled around from the other side.

Picking up a stick, Mowgli waved it at the wild dogs but they weren’t afraid. The rest of the pack moved in closer. Even when he hurled a stone in their direction, the hunters drew the circle tighter, their bushy tails wagging and their ears twitching in anticipation. Unlike the farm dogs who had barked and barked, the dhole remained silent now, not even a whistle. Though he had been alarmed and upset to see the fawn and its mother surrounded by the dogs, Mowgli realized that he was in the same position now and there was no way he could escape. Baring his teeth, he tried to be brave but he knew he was outnumbered and trapped. As he started to run, Mowgli’s feet slipped in the mud and he fell to his knees.

Just as the dogs’ sharp teeth were about to find their mark, the matriarch decided she’d waited long enough. With another trumpet of rage, she charged the pack, followed by the rest of the herd. The wild dogs knew better than to hold their ground against these thundering giants who could crush them underfoot. Within a few seconds they scattered, racing away into the bushes, emitting a few frustrated whistles as they disappeared.

The boy’s legs and arms were covered in mud but he was unhurt. Mowgli looked up at the mother elephant with a defiant expression. You didn’t need to help me, he said. I could have chased them off by myself.

Is that so? the matriarch replied. I hope you’ve learned your lesson. What lesson? Mowgli mumbled as he got to his feet. Think before you blunder into a situation where you can’t defend yourself, came the reply. It’s all very well to feel sorry for another animal but that doesn’t mean you have to put yourself in danger.

The dogs would have killed the deer, he answered.

Yes, that’s how they survive, the mother elephant replied. It may seem cruel but it’s the way of the wild.

How could you just let them attack a defenceless little fawn? the boy insisted as he stomped out of the mud. Don’t you feel sorry for the deer? Of course, we do, one of the other elephants replied. But if the dogs don’t catch their prey, they’ll starve. They won’t have any meat to feed their young. Besides, we can’t spend all our time defending other species, the matriarch added. We wouldn’t be able to feed ourselves. But it’s not fair! the boy cried. It’s wrong to let another animal be killed!

The elephants looked at each other with sombre expressions and shook their heads in unison. 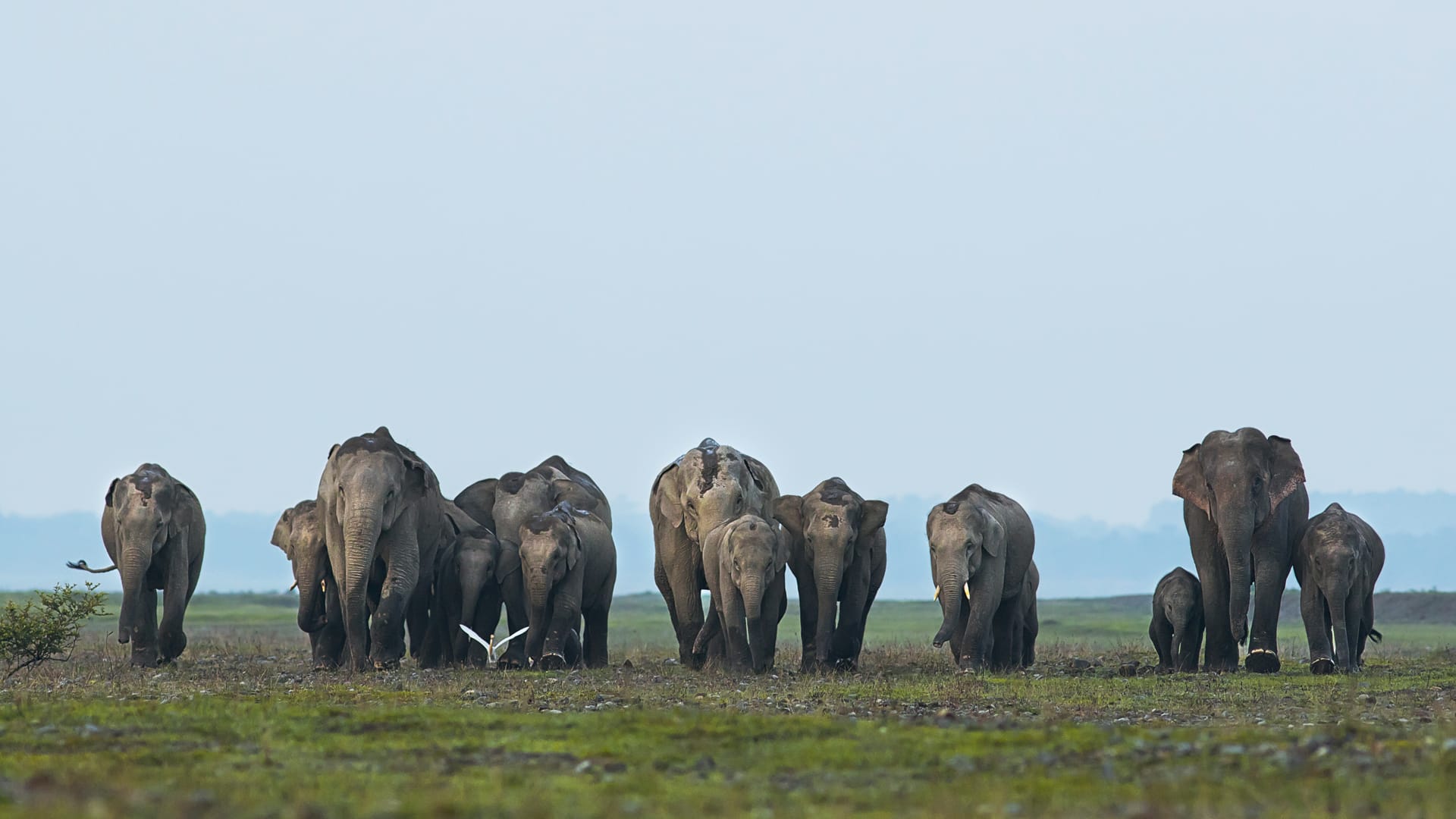 But elephants don’t kill animals and eat them! the boy cried out in frustration.

That’s true, the matriarch replied. We do a lot of damage in other ways, though. We knock down trees where birds build their nests. Without knowing it, we crush insects and lizards under our feet. Sometimes, we even attack leopards and tigers in self-defence. But that’s what all animals do in the wild. It’s part of the natural cycle of life. In fact, the only species that harms other creatures for no reason at all are human beings!

The boy faced the herd with a puzzled expression and frowned. Why are you staring at me? the boy protested. I’m not a human! Yes, I’m afraid you are, whether you like it or not, the matriarch replied. That’s the reason you tried to protect the chital.

What do you mean? Mowgli said, folding his arms. How can humans kill animals and protect them at the same time?

It’s one of the contradictions of your species, the wise mother elephant replied. Remember, I lived amongst men for most of my life and I was able to observe how they behaved. Sometimes they are cruel and heartless. Other times, they are compassionate and kind. Your people can’t ever seem to make up their minds.

Hearing this, the boy fell silent, knowing that sometimes he himself had felt those same conflicting emotions, like a wind that blew in both directions tossing the trees back and forth.