Of Sacred Streams and Groves

India has a rich history and tradition of conservation linked to the lifestyles and worldviews of the local tribal and non-tribal communities. Conservation processes at these sites are intrinsically connected to local socio-cultural, economic, ecological and political realities. Sacred sites and species, considerably reduced now, were once believed to be widespread across India. Estimates suggest there could still be 100,000 to 150,000 such sites remaining, ranging from a small group of trees to extensive landscapes. Such areas are referred to as Community Conserved Areas (CCAs) in the Indian context.

An attempt was made in 2009 to document some CCAs in India. This documentation included about 140 CCAs but pointed toward this phenomenon being more widespread, with the presence perhaps of hundreds more such initiatives covering a variety of ecosystems, including forests, marine and coastal areas, wetlands, individual species and sacred landscapes.

Subsequently, more detailed documentation was taken up in Nagaland, Madhya Pradesh and Odisha, indicating that CCAs are set up and managed for a range of objectives and have different ecological and social contributions.

Maharashtra is biologically, geographically and culturally very diverse. Its bio-geographical regions are linked and have co-evolved with distinctive local cultures built around intricate traditional knowledge systems, nature-centric worldviews and lifestyles. Much of the forests included in the national parks and sanctuaries of the state are also traditionally home to such tribal and non-tribal communities. Over time, however, some traditional systems have broken down for various reasons, but many do remain. State conservation programmes have not taken into account the astounding cultural diversity that exists in the state and its role and significance for conservation. Indifference of the state toward sustainable livelihood options such as pastoralism is leading to erosion of such ways of being. Both the biological diversity and associated cultural diversity is under grave threat due to Maharashtra’s escalating development profile based on rapid economic growth. This has led to displacement of local communities, destabilization of cultures and destruction of large stretches of forests, grasslands, rivers, freshwater inland wetlands, and coastal and marine areas.

In this context it is important to understand CCAs in Maharashtra. In the absence of any serious documentation of CCAs in the state, anecdotal accounts indicate a rich tradition of conservation of ecosystems and habitat by the local communities. These include active protection and conservation by setting aside stretches of forests and water bodies, sustainable management of forests and other ecosystems, or collective struggles against strong commercial forces causing destruction of habitat and ecosystems. This chapter attempts to highlight some such examples with the hope that detailed documentation will be taken up before such sites are lost. 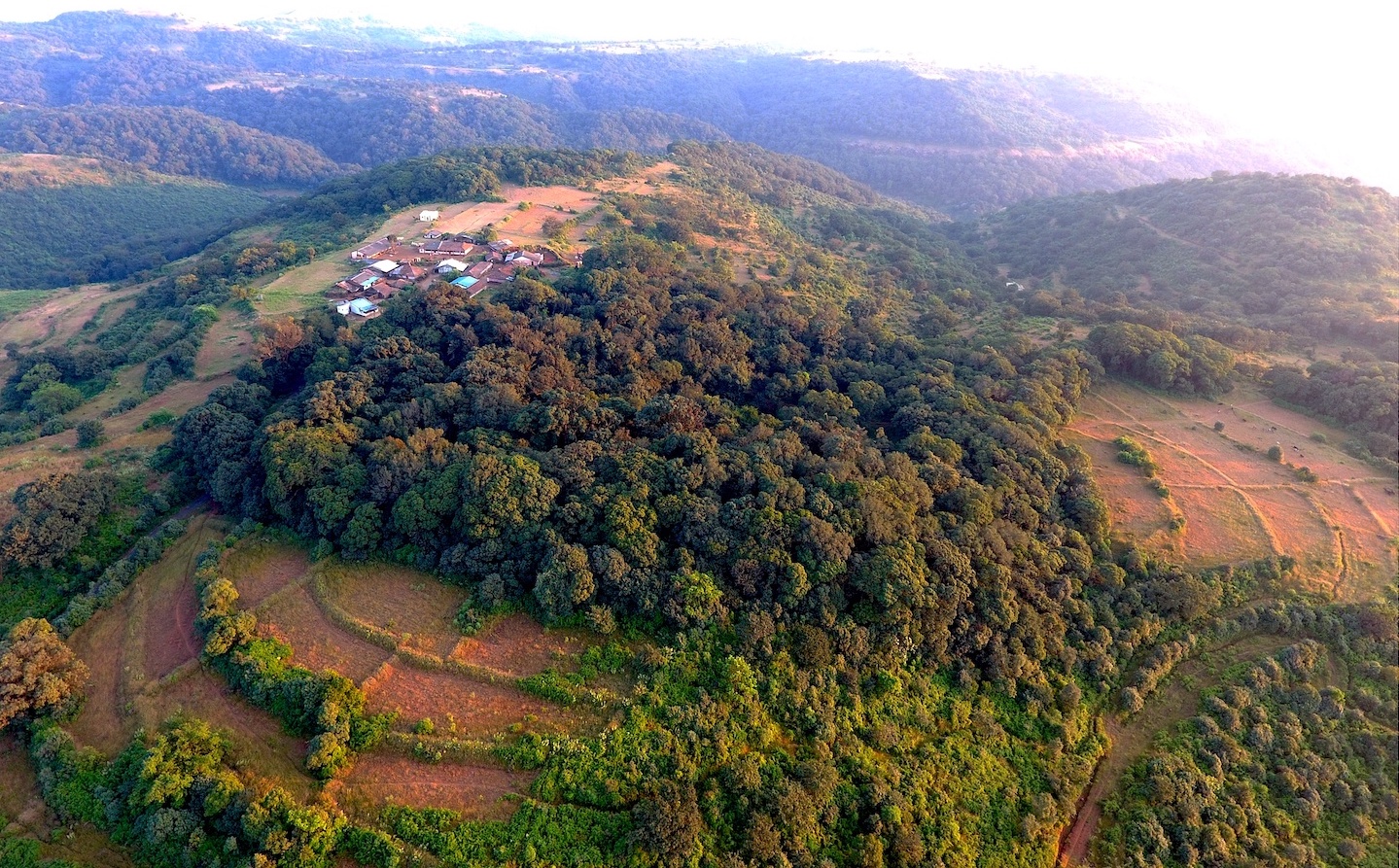 A sacred grove at Aghane near Bhimashankar Wildlife Sanctuary in Maharashtra. Photo: Dr. Sachin A. Punekar

Not much is known about the fish sanctuaries in the state, which protect many indigenous and endangered species of fish. The term “sanctuary” here is not to be mistaken for a legally designated sanctuary. These sanctuaries, referred to by different names in different areas, have no legal designation or recognition, but are traditional practices of people living around rivers to protect patches of rivers and fish from exploitation.

Tekpowale kund is located in Mangaon village near Pune, upstream of the Panshet reservoir, on a mountain stream called Kadkuna Nadi. Tekpowale villagers zealously protect the mahaseer fish in it as they consider it sacred. The source of the stream is also considered sacred (devasthali). Strict regulations are in place for protection of the devasthali, the kund and the fish. The kund is not used for any other purpose but as a source of drinking water, women are not allowed at the kund, and fishing is prohibited. The villagers consider the kund to be the source of their life from time immemorial and discourage outside visitors to the kund. They are also reluctant to share information about the kund and stories of misfortune befalling those who ignore the regulations are plenty.

Walen kund on River Kali in the Mahad region of the Konkan is about 100 yards long and is flanked by a rocky gorge on top of which is located the temple of Goddess Vardayini. The kund houses many indigenous and endangered species of fish like shindas, kolas and the Deccan mahaseer. As per legend, the depth of the pool is unfathomable and the generous offerings made to the temple were taken to a grand temple under water by the priest. Strict rules and regulations were followed. Construction of a major highway passing by the kund has now made it easily accessible, bringing about socio-cultural changes and eroding many regulatory customs. The only one that remains today is the prohibition on fishing.

These sanctuaries offer a glimpse of the traditional ways of protecting rivers and their inhabitants. Many such sites have, perhaps, been lost forever because of various dams built over the state’s rivers while others continue to face immediate danger from roads, dams, and pollution. An immediate need is documentation and recognition without external impositions and interference in local sentiments, norms and systems.

Sacred groves in and around Bhimashankar Wildlife Sanctuary

Sacred groves are stretches of forest traditionally protected by local communities for their religious or cultural significance. These sacred groves can range in size from a cluster of trees to hundreds of hectares and are common in most parts of India. The sacred groves in the western part of Maharashtra are called Devrai or Devrahati whereas in eastern Maharashtra, the Madiya tribe calls them Devgudi. Nearly 2820 sacred groves have been documented in the state .

Bhimashankar WLS is located in the northern Western Ghats in Pune and Thane districts. This 131 sq km sanctuary was officially notified in 1985 and includes about 14 sacred groves, including a large grove surrounding a Shiva temple, which is one of the twelve Jyotirlingams in India. This grove is the origin of River Bhima, an important river of the Krishna Valley. The Mahadev-Koli tribe and a smaller population of Katkaris and Dhangars inhabit the sanctuary and its surrounding region. Villages located in and around the sanctuary often have one or more sacred groves dedicated to the local deity, called ban or devacha ban (God’s forest). Most of these groves are between one and six hectares in area. The most common deity is Vandev (forest god), also known as Bhairavnath, Bhairoba or Kalbhairavnath. These groves are either managed collectively, by a clan or a family in the village.

Many taboos and restrictions surround these groves. These include prohibition on tree cutting and fuel wood collection, and often on livestock grazing as well. Fuel wood may be collected from the grove during festivals or ceremonies in the grove itself. Entry of women in temples and groves is prohibited in most cases. Religious ceremonies, offerings and other cultural festivals take place in these groves. In most sacred groves, the annual Jatra or Saptah is conducted during the month of March–April (Chaitra). Rituals related to agricultural cycles such as during paddy transplantation and harvesting are also performed as a symbol of gratitude to nature and deities. Despite their small size these groves support important local biodiversity and are often sources for local water bodies.

Over the years, there have been numerous changes in the groves in this area. Rudimentary temples in most groves have given way to concrete constructions. Some of the groves have reduced in size while in others only the concrete temple stands. People attribute these changes to the erosion of the belief system. Older people believe in the tradition of the grove more than the younger generation. There is an urgent need to document and recognise these groves while retaining community control over them and initiating dialogues with the community members on social, cultural and ecological value of these groves. Providing incentives could be one way to encourage continuation of this ancient tradition.

Excerpted with permission from The State of Wildife and Protected Areas in Maharashtra edited by Pankaj Sekhsaria.

The book is available for purchase from: https://www.amazon.in/State-Wildlife-Protected-Areas-Maharashtra/dp/8192326934 or by writing to Pankaj Sekhsaria (Email: psekhsaria@gmail.com)

The Wild Stars of South India

Mowgli Encounters a Pack of Dholes

Why Do These Starry-eyed Frogs Disappear into Bamboos?

Hidden Kingdom: Fantastic Plants and Where to Find Them

Bringing a Forest Back from the Brink