Finding a ‘Star’ Among Frogs

When a team of ecologists discovered a frog with constellation-like markings on its back, they knew just what to name it!

The frog had pale blue dots on its glistening brown body. When the light shone on it, the dots glittered. Like stars. When you turned the frog over, it had a bright orange underbelly, like a sunrise. The mysterious creature was tiny, the size of a thumbnail. It lay hidden under a dried leaf in the thick canopy of a tree. Vijay and his team would have missed it completely, had he not been an expert on frogs.

SP Vijayakumar, or Vijay as his friends called him, was a doctoral researcher at the Indian Institute of Science (IISc) in Bengaluru and an ecologist. He’d encountered the frog on one of his nightly hikes through the dense forests of the Western Ghats. The Ghats, a green, mist-soaked mountain range in the south of India was a biodiversity hotspot. Also called the Sahyadri, the thick wilderness hid more than 250 species of amphibians – the type of creatures that Vijay specialised in researching.

When the leaf in the woods rustled slightly, Vijay had crouched on the forest bed to investigate.

‘Is that a Nyctibatrachus?’ asked his colleagues, Saunak and Mrugank, as they inspected the frog, an expert at hiding. Nyctibatrachus was a group of night frogs commonly found in the Western Ghats.

‘It does look like one, but the starry patterns are different. And here, look…’ Vijay picked up the frog in the palm of his hand, upturning it carefully, ‘…the toe pads are different from Nyctibatrachus. Or any other frog we’ve seen!’

On their nocturnal rambles, Vijay and his team listened for, photographed and collected rare specimens of frogs, lizards and snakes that hopped on and slithered across the dark forest floor. It was their job to study these amphibians and reptiles. They were all part of Kartik Shanker’s laboratory at the Centre for Ecological Sciences (CES) at IISc. Kartik was their professor and a fellow ecologist.

The team had been surveying the Ghats for several years now, combing through them day and night. The survey, which began sometime in 2010, was intense.

Most Astrobatrachus kurichiyana individuals were sighted in the montane forests of Kurichiyarmala on Wayanad Plateau, except for a single individual in the grassland. Photo: S.P. Vijayakumar CC BY-SA 4.0

The aim was simple – to collect samples of amphibians and reptiles and bring them back to the CES lab. At the lab, the samples or ‘specimens’ (as scientists call them) would be more closely examined, their physical traits listed. Eventually, the group would also sequence† the genes of all the specimens collected. This would help them understand the evolutionary relationships between various species. That p articular night had been frustrating for Vijay and his team. They had trudged through the cold – sampling, recording, taking photos and writing notes – while being bitten by mosquitoes and sucked on by leeches. Vijay was tired and wanted to go back to his field station (the base they had set up near the forest). But he was excited about the new discovery.

‘Let’s take a sample,’ suggested one of his colleagues. Vijay agreed, in a hurry to get some sleep. They picked up the frog and put it in their sample bag along with dozens of other specimens. Later, they found out that they had picked up 15 to 20 different types of frogs that night. But none was as remarkable as the one with stars on its back.

After he reached the CES lab, Vijay passed on the sample of the elusive frog from the Ghats to Varun Torsekar, another student in Kartik Shanker’s laboratory, who specialized in studying night frogs.

Their professor Kartik was an evolutionary biologist. His job was to figure out how different species of animals, say in Africa and India, were related to each other. To do this, his team at the CES lab studied their DNA and built evolutionary trees which mapped the relationships between species.

Kartik encouraged his students to study a variety of frogs, lizards, snakes and even marine fauna. But a single species, even if it was a new one, was not that important to their research in evolutionary biology. Since Varun could not find an immediate connection between the starry frog and other night frogs, they tagged it, added it to their collection and put it away.

Vijay went back to the Western Ghats several times in the following years. He found 20 new types of bush frogs (a species prevalent in the Western Ghats), of which nine were eventually found to be new species previously unknown to scientists. All this while, the starry frog lay forgotten in a drawer in the CES lab.

A few years later, Kartik was on a field trip with a student, Navendu Page, when the starry frog came up in conversation.

‘Remember the frog…the one that Vijay found?’ Navendu said. ‘He mentioned that it might be an entirely new genus.’

Discovering new species was important, but not the focus of evolutionary biologists. However, finding an entirely new genus was a great discovery, though tough to prove! This meant that the starry frog’s DNA could tell them a lot about frog evolution and migration from millions of years ago.

Kartik rushed back from the field to the lab and called a meeting with Vijay and Varun. Vijay took the forgotten frog out of the drawer and the three scientists inspected it closely once again. They realized how different it was from any other frog they had seen, with its star-shaped dots and orange belly. Being scientists, they had to be sure that the frog was a unique find – a new genus. This meant that they had to make a list of not just its external features, bone structure and behaviour, but also of its genetics.
‘Let’s get other scientists involved,’ said Kartik, realizing that they were onto something big.

To describe the species form, Kartik, Vijay and Varun brought in KP Dinesh, a scientist at the Zoological Survey of India (ZSI) in Pune. He had been a postdoctoral researcher in Kartik’s lab and was interested in frogs too.

Dinesh went back to the spot that Vijay had visited in the Western Ghats seven years ago to find the starry frog and observe it in its habitat. He collected all the additional data required for the description of the starry frog. The frog did not match any of ones listed in their catalogue. It was definitely a new species. But to figure out if it was a new genus or sub-family, they had to dig through all the databases – in the whole world! 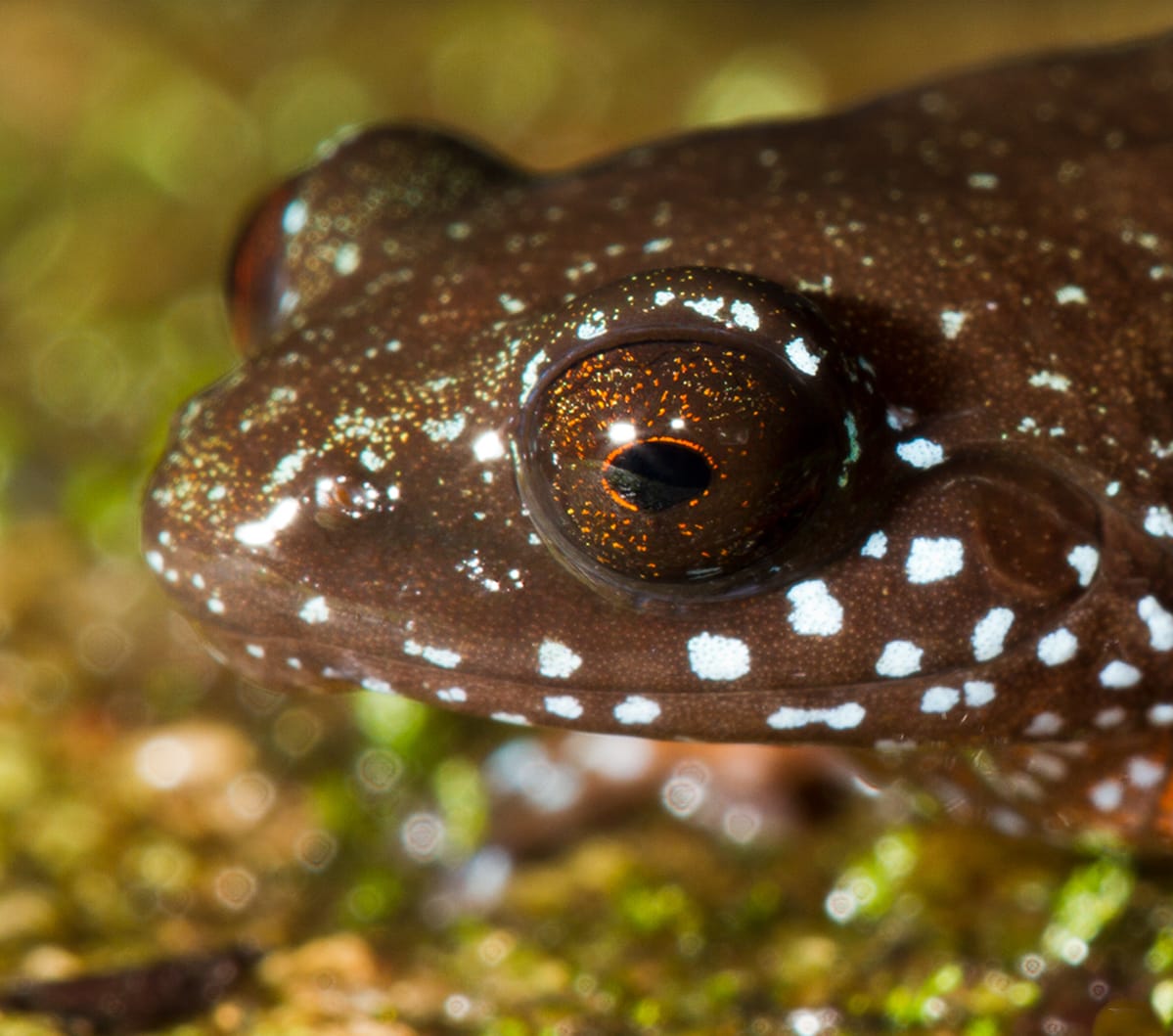 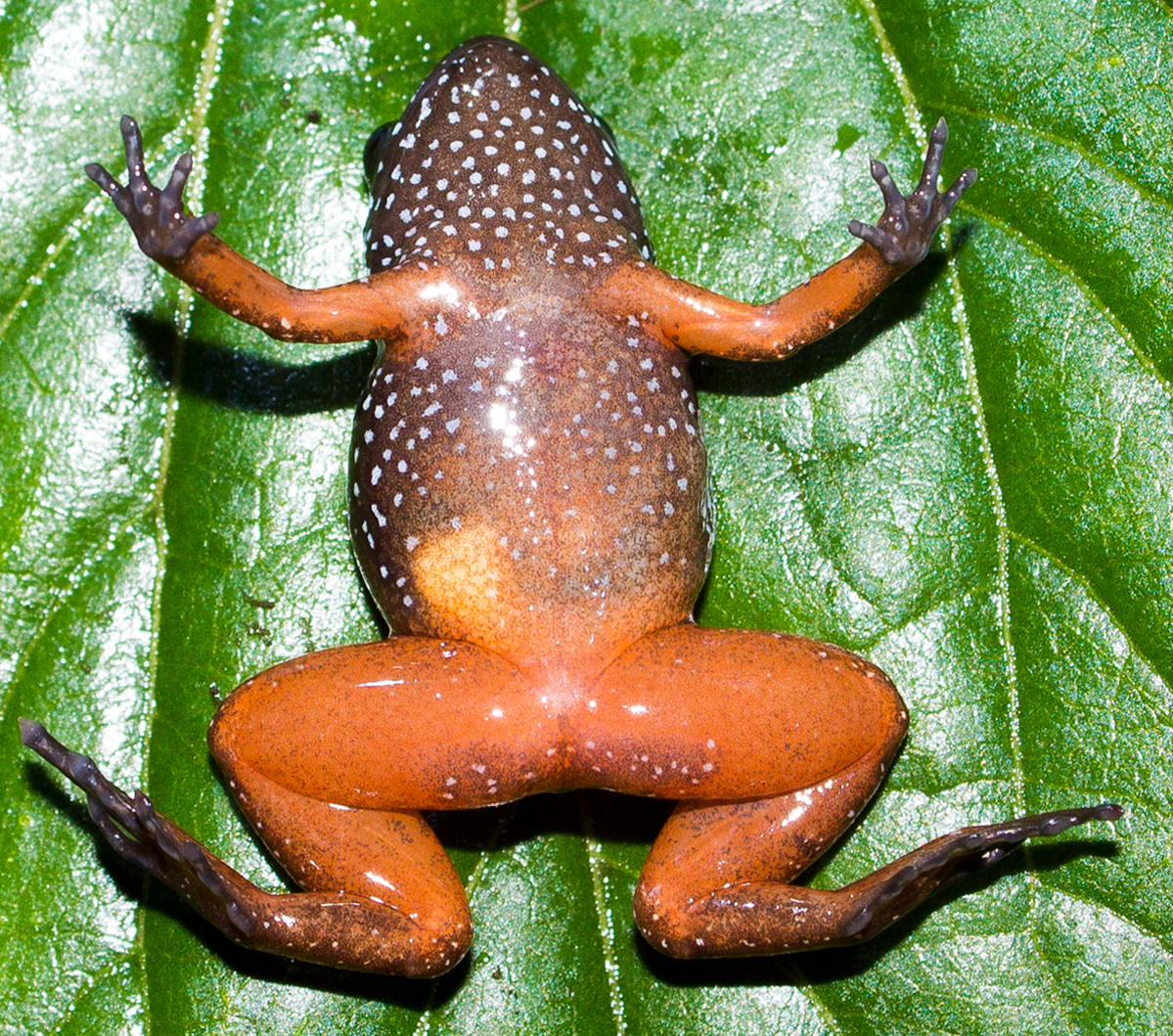 Kartik and his team contacted Alex Pyron, a professor at George Washington University in the USA. He had compiled the genetic data of over 4,000 amphibians from every part of the world. Working their way through it, the researchers could map how the new species was related to other frog species. Kartik also sent a CT scan of the frog’s skeleton to US-based scientists David Blackburn and Edward Stanley at the Florida Museum. They compared the starry frog’s bone structure to other frog species from the Western Ghats.

Both teams got back with the same result. The starry frog was entirely different from any frog that had been described before. They found that its closest relatives were the family of Nyctibatrachidae, a group of over 30 species native to India and Sri Lanka.

Further analysis revealed something truly amazing. The sub-family of the frog had diversified or branched off around 60 to 70 million years ago, and had stayed isolated since then. This meant that it was not only a new genus, but it was also the descendant of an ancient lineage of frogs at least 60 million years old! ‘This frog has had no sister species for tens of millions of years!’ exclaimed Vijay.

Kartik’s team of ecologists named the starry frog Astrobatrachus kurichiyana. ‘Astro’ (Greek for star) was for its constellation-like markings, ‘batrachus’ stood for frog and ‘kurichiyana’ was derived from the Kurichiyar tribe who live in the hills where the frog has made its home.

Excerpted with permission from They Made What? They Found What? by Shweta Taneja, published by Hachette India, Price: Rs 399