The Wild Stars of South India

With a foreword written by herpetologist Romulus Whitaker, the Photographic Field Guide Wildlife of South India is a comprehensive field guide covering the mammals, birds, butterflies, dragonflies, reptiles and amphibians of the six states of south India. Designed by Mugdha Sethi and edited by Faiza Mookerjee, it covers 1,915 species using 1,800 photographs contributed by around 280 photographers.

Galaxy frog or black microhylid (Melanobatrachus indicus) | Snout–vent length: 30-35 mm Probably the most brightly-patterned frog of the region, it is found in pockets of ideal habitat throughout the southern Western Ghats. The actual distribution is yet to be confirmed. Moist forest patches, especially in the mid- and high-altitude evergreen forests, seem to be their preferred habitat. It is seldom seen as it hides under rotting logs and vegetation for most of the year and is active only for a short time. This unique frog lacks the vocal sack and tympanum, which are both vital tools for breeding frogs. The breeding behaviour of this species remains a mystery. Photo: David Raju

An adult caecilian guarding eggs. These are limbless amphibians. They are fossorial in their lifestyle except during the heavy rains when they can be seen awkwardly slithering along roads, forest paths and leaf litter. They inhabit loose moist soil that is rich in vegetative matter and sometimes hide among rotting logs, rocks and leaf litter. Eggs are laid in these hidden spaces and are usually guarded by the female. There are no external differences between the male and female. Earthworms, termites and soil invertebrates form a major part of their diet. Caecilians are often confused with earthworms and smaller snakes like shieldtails and wormsnakes. Photo: David Raju

Rurk’s cat skink (Ristella rurkii) | Snout–vent length: 4.4–4.7cm This group of skinks is endemic to the high montane sholas and grasslands of the Western Ghats. They get their name from the retractable claws on their digits. They have four digits on the forelimbs and five on the hindlimbs, an important distinguishing characteristic. They are iridescent blue or brown above (with or without small white spots); some show bright yellow-brown or red on the undersides (possibly during breeding), a stout long tail and a short snout. Photo: Surya Ramachandran

Large-scaled pit viper (Trimeresurus macrolepis) | Length: 58-70 cm Found in the sholas, grasslands, secondary forests, rocky outcrops, stream sides and even semi-urban areas in the high hills of the Western Ghats- south of Palghat Gap namely the Cardamom Hills, Anaimalai Hills, Palni Hills, Meghamalai and Agasthyamalai Hills. The small size makes it hard to find them in the undergrowth and thick vegetation that they occupy. The activity levels go up during the monsoon rain, which is when they are seen in the open, usually near forest paths, streams and grassy clearings (often at night), lying still in one spot for long periods to ambush unsuspecting prey. The diet comprises mainly of amphibians, small mammals and reptiles and occasionally birds too. The venom in these snakes is poorly studied and the results of a bite by these snakes have variable outcomes in the victims. Photo: Surya Ramachandran

Striped coral snake (Calliophis nigrescens) | Length: 127 cm Widespread throughout the moist forests of the Western Ghats, including the high hills. It is also recorded in the Shevaroy hills of Eastern Ghats. They are seen in three different forms in the various regions. The days are spent hidden among leaf-litter, burrows or under fallen logs and stones. They emerge at night, usually sticking to vegetation, to feed on other species of smaller snakes like shieldtails, wood and worm snakes that comprise a large part of their diet. When faced with danger, they coil their tail to display their bright underside, taking the attention away from the head. Many of them are mimicked by other snakes, especially by shieldtails, in the region. Photo: David Raju

Resplendent bush frog (Raorchestes resplendens) | Snout–vent length: 24-28 mm One of the most beautiful bush frogs of the region, this is a critically endangered species. It is recorded only from the montane grasslands and high-altitude marshes of the highest peaks (above 1800m) around Munnar. They crawl (rarely jump) amongst their habitat to find ideal spots inside thick grass clumps and reeds in these localities and vocalise during periods of heavy monsoon rains. Photo: Surya Ramachandran 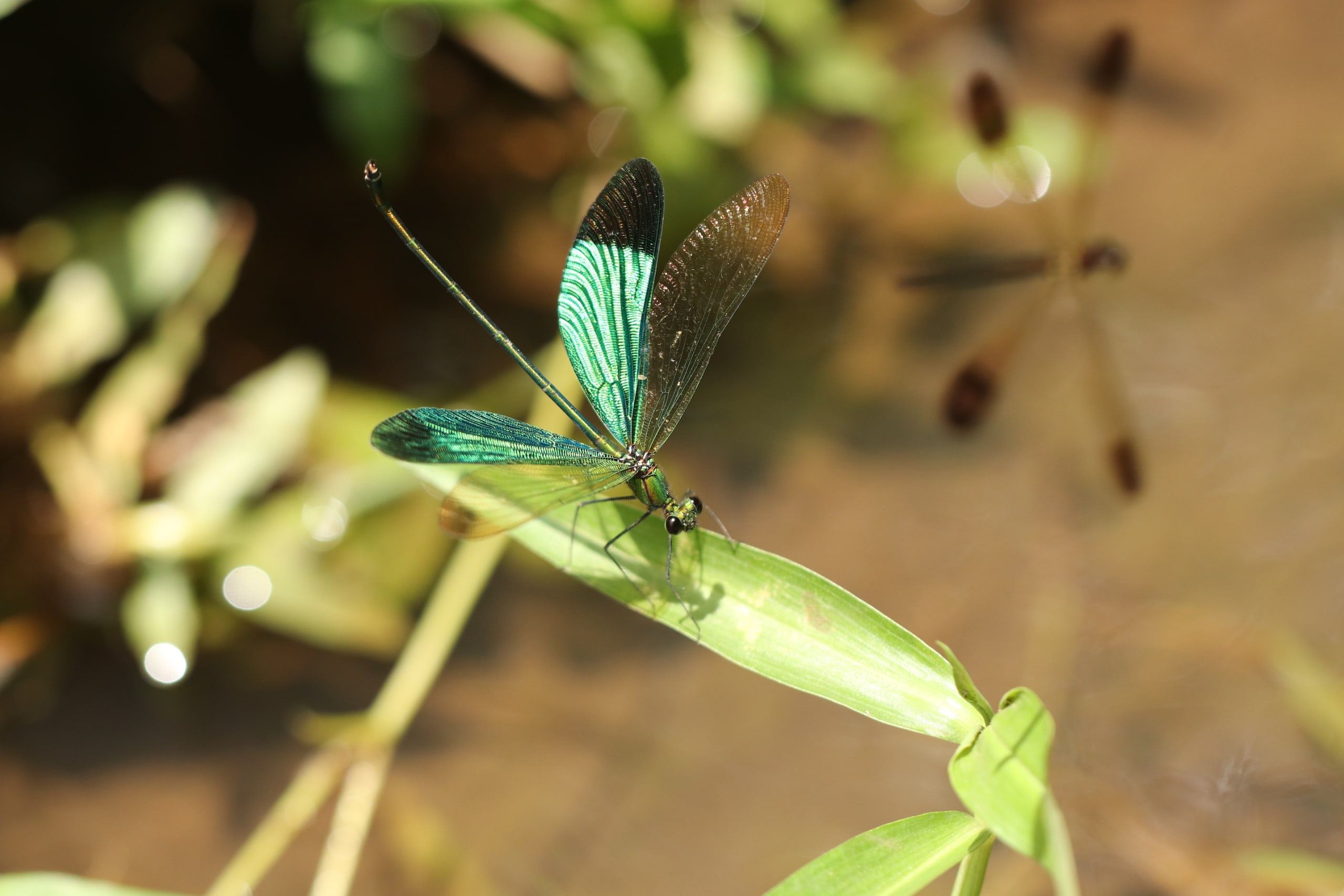 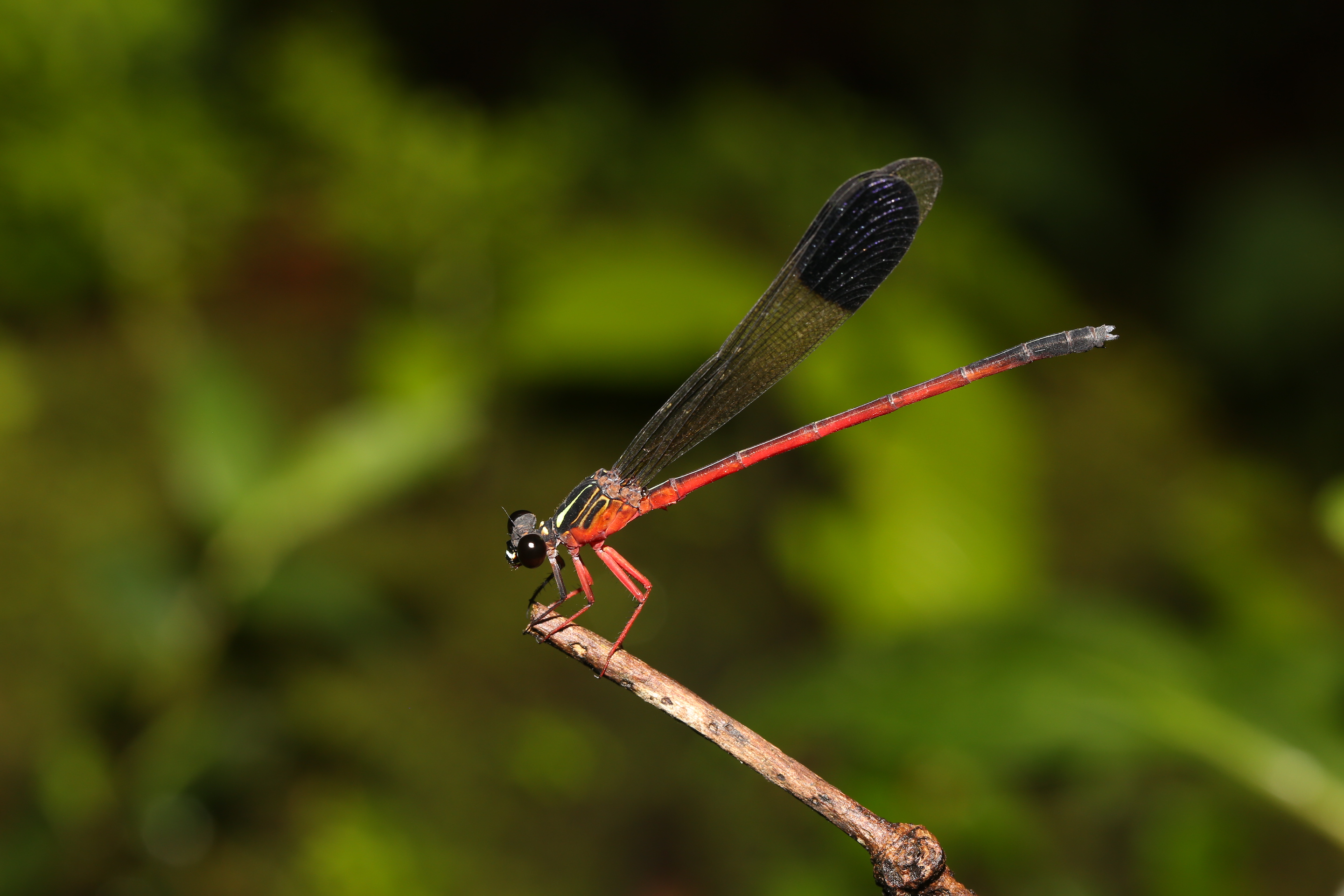 Top: Orange awlet (Burara jaina) | Length: 60-70 mm | Larval host plant: Honeysuckle Hiptage benghalensis This fast-flying butterfly is restricted to moist forests of our region, especially the hills of Western Ghats and in pockets of Eastern Ghats. The orange on the thorax, legs and the orange hindwing border coupled with the black spots at the base of each wing make them unmistakable. They are active in open areas at dawn and dusk, visiting damp patches and flowers, disappearing during the day into thick shade or underside of leaves. Photo: Surya Ramachandran Above left: Stream glory (Neurobasis chinensis) | Length: 45-50mm | Hindwing: 32-38mm | Best viewing: Hill forest streams They are best seen around fast-flowing mid-altitude hill streams, their preferred breeding site. Males possess a metallic green thorax and abdomen and brilliant emerald green forewings with black tips. Female wings are brownish and translucent. During the breeding months - the monsoon and post-monsoon the males are known to be highly territorial and perch on top of rocks among forest streams. When a female or rival male approaches, they flash their bright wing colours. It is widely distributed in the evergreen forests of Western Ghats and possibly in pockets of the northern Eastern Ghats. Photo: Surya Ramachandran Above right: Malabar torrent dart (Euphaea fraseri) | Length: 36-41 mm | Hindwing: 34-38 mm These are large, brightly coloured damselfies that occupy the forested streams throughout the Western Ghats. Sometimes they are encountered in semi-urban streams where the water quality is good. Shallow streams with rocky banks and vegetation are preferred. It lacks the black tip on the hindwing and the black marking is restricted to the last two segments of the abdomen and has red legs. There are subtle differences between species, mostly based on the extent of colour distribution. Males perch prominently in and around the stream while females come to the water during breeding. Females of the species look more or less similar to each other. Photo: Surya Ramachandran

“As professional wilderness guides and naturalists, we understand the importance of simplifying and presenting complicated information in a beautiful concise manner. That is essentially what this book is all about – a powerful tool for anyone who wishes to explore and better understand the wild corners of the region. It has been three years since we started working on the book and in the end, all we want to do is get back out there and revisit all the wild spaces of South India that inspired us to make this book a reality.” – Surya Ramachandran

“The first connect we make with anything we come across, from people we come across to objects and wild denizens, is the process of naming it. This often leads to the building of curiosity, awareness and eventually conservation in some form. This book is an effort to ensure that the process of initial identification is made easy and plant the seeds of exploration and the need for preservation of our biodiversity.” – David Raju

Excerpted with permission from the Photographic Field Guide Wildlife of South India by Surya Ramachandran and David Raju, published by Notion Press, Price: Rs 1,500. For those within India who wish to buy the book supported by WWF India and Muthaiah Research foundation, visit: www.photofieldguides.com