Faking It: Big Cats and the Confusion Around Paternity

Female lions and tigers go to great lengths to mask the identity of their cubs’ fathers, and with good reason 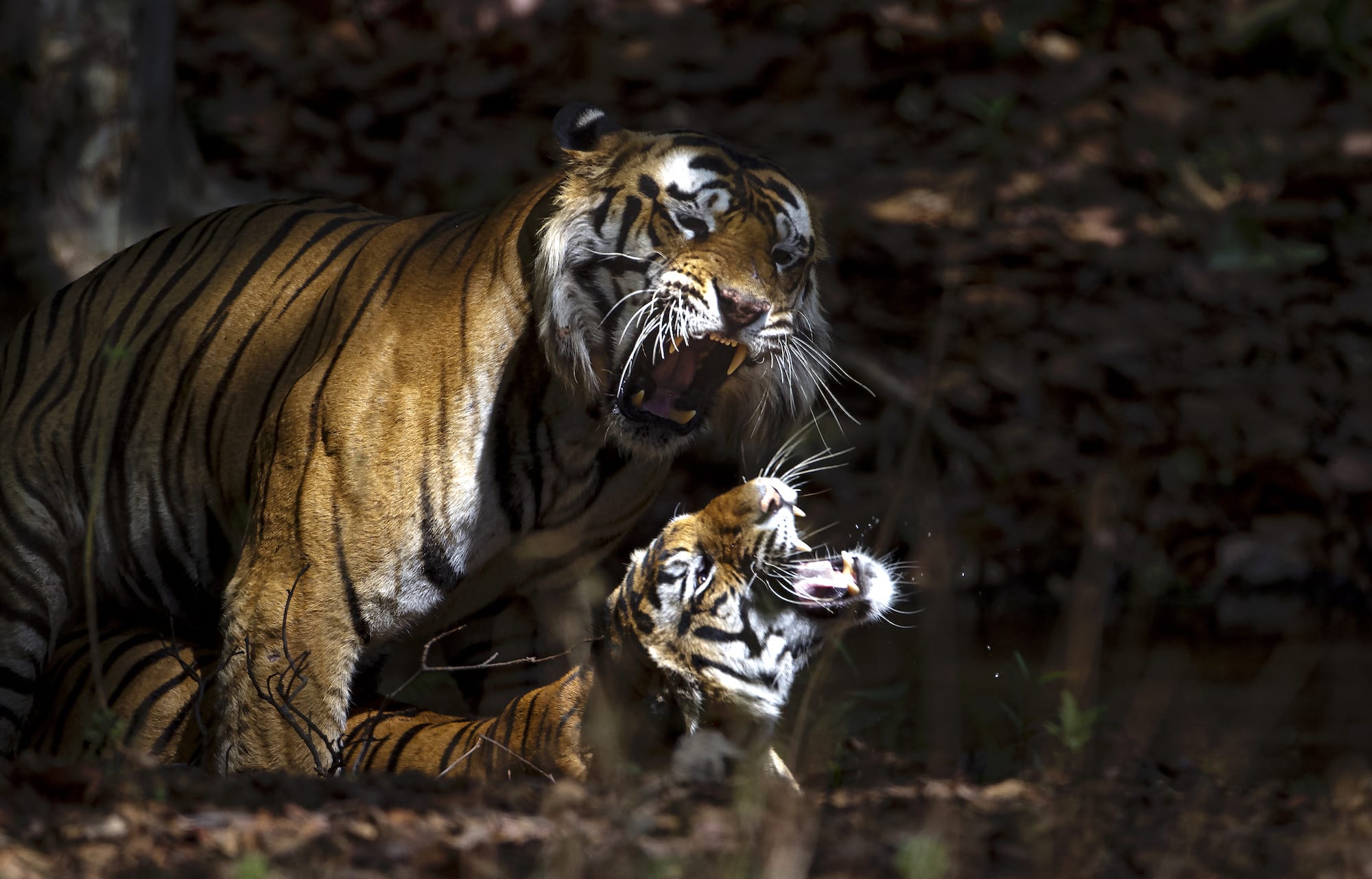 Fans of celebrity wild tigers can rattle off the cats’ parentage as casually as they would their own. When I visited Tadoba-Andhari Tiger Reserve, Maharashtra, in the mid-2010s, the antics of the Telia sisters ruled campfire conversations. They were the offspring of Madhuri and Wagdoh, said the resident naturalists at the lodge who went on to regale guests with these tigers’ histories. Similarly in Ranthambore Tiger Reserve, Rajasthan, tourists learned that Noor was the daughter of T-13 aka Old Sultanpur Female and T-12. Stripes as unique as fingerprints identify every royal cat, and the high visibility ensures little escapes human attention. Such familiarity is unprecedented as these are not zoo animals whose pairings are controlled and lineages chronicled by keepers.

Not so simple is the case of Gir lions in Gujarat. Individuals are harder to recognise since their plain pelages don’t offer any distinguishing marks. To me, most of them look alike although scars give some away. These cats aren’t solitary like tigers, but live in groups making it even more difficult to tell them apart. But wildlife guards claim to distinguish them from subtle differences. Even if they know the charismatic ones, they wouldn’t be familiar with the details of the cats’ parentage. While their ancestry is a matter of curiosity to us, it could mean the difference between life and death to lion cubs.

Infanticide is common behaviour among large cats, and females such as this lioness with her cub seemingly have little choice in the matter. Photo: Dhritiman Mukherjee Cover photo: Female tigers copulate with dominant males, as in this instance in Bandhavgarh, but they also mate with “floaters”, ones that don’t have a territory to call their own. Cover photo: Shivang Mehta

Adult males kill little ones and chase away juveniles that are not theirs. Although the half-grown escape with their lives, they are still dependent on their mothers and won’t live long on their own. Infanticide is common behaviour not only among lions, but also with other large cats, including tigers. Losing cubs triggers oestrus in their mothers, so cub-killing males can become fathers. Lionesses seemingly have little choice in the matter.

Male and female lions live in sex-segregated groups. Usually two Asian males team up to cooperatively guard their terrain and bring down deer-sized prey. The ranges of two to four such coalitions overlap the domain of every pride of females. With as many as eight males encircling a pride’s small turf in Gir, it’s a matter of time before one of them discovers the cubs and kills them.

Although lionesses band together with others in their family groups to defend their offspring, they are too few to take on marauding lions. But they are not helpless either.

Asian lionesses mate with the males that they meet most often. Photo: Stotra Chakrabarti

They have figured out how to deceive predatory males, say lion researchers Stotra Chakrabarti and Yadvendradev Jhala. Experienced females mate with the male duo that they meet most often because their territories overlap. But they also go in search of other lions living on the fringes, and copulate with them, conceiving only after mating several times with each of them. In contrast, their African cousins are faithful to one male pair.

When any Asian lions come upon a litter, they don’t know if it belongs to them. They can’t rely on the cubs’ looks, smells, and cries to determine whose they are. But they recognise the mothers as their sexual partners.

“All the males consider the cubs their own because of female promiscuity,” says Chakrabarti. “Females outwit the males in this entire game.”

First-time mothers don’t know this trick, and instead mate almost always with one male coalition. If another male chances upon the cubs, all is not lost. The pride collectively nurtures the cubs born to its members. For instance, three females may nurse six to seven young ones without any favouritism, making it hard to match offspring with its biological mother. The lions of the neighbourhood are none the wiser. They assume they are the dads and spare the little ones. Even researchers who spend several months observing prides find it difficult to identify every cub’s mother. The experienced lionesses’ sexual dalliances ensure even the offspring of inexperienced lionesses survive.

Asian lionesses seek lions living on the fringes and copulate with them as well. Photo: Stotra Chakrabarti

However, this subterfuge hinges on familiarity. While females occupy the same territory for years, males suffer a high turnover. When a new team of younger and stronger rivals takes over the domain of another, the young fathered by the defeated males are in peril. Of all the causes of cub mortality, infanticide takes a high 30 per cent despite the shrewd precautions of the lionesses.

Even in such difficult situations, females use sex to avert tragedy. The researchers observed when invading lions showed up, mothers on three occasions pretended to be in oestrus and lured the would-be assailants away from their hidden cubs.

Faced with the same problem, tigresses adopt a similar strategy. In Panna National Park, Madhya Pradesh, after mating with dominant males, females copulated with “floaters”, ones that didn’t have a territory to call their own. Perhaps apprehensive females sought to nullify male aggression by trading intercourse for peace. According to textbooks on cat biology, these non-territorial animals don’t breed and avoid facing dominant tigers. However, scientists observed four radio-collared females mating with territorial tigers on 14 occasions and then seeking the company of floaters in six instances. Three copulated with more than one tiger within days.

Mother tigers, like this one photographed in Tadoba, forestall male violence against their cubs by mating even when they are not in heat. Photo: Shivang Mehta

This is not an exception, say naturalists. In Tadoba, they chronicled eight-year-old Maya’s dalliances with different tigers. In Ranthambore, the elderly Noor ceded her territory to her daughter and moved into a new area that already had three males. The tigress mated with all of them in one day, says photographer and resident Aditya Singh.

Female tigers, like lionesses, don’t consort with males only when they come into oestrus. They forestall male violence by mating even when they have cubs and are not in heat. Sex seems to cloud the males’ judgement, and thinking they will become fathers soon, they aren’t nosey enough to go looking for their rivals’ offspring.

All this feline seduction means that short of a paternity test, genealogies can be certain of only one thing: the identity of the mothers. In lion societies, however, even maternal lineage is confusing. Cubs call many lions dads and suckle at the teats of more than one mom. They wouldn’t have it any other way.

A city girl gone feral, she is the author of two volumes of My Husband and Other Animals