Text by: Janaki Lenin
All photos and video: Vipul Ramanuj 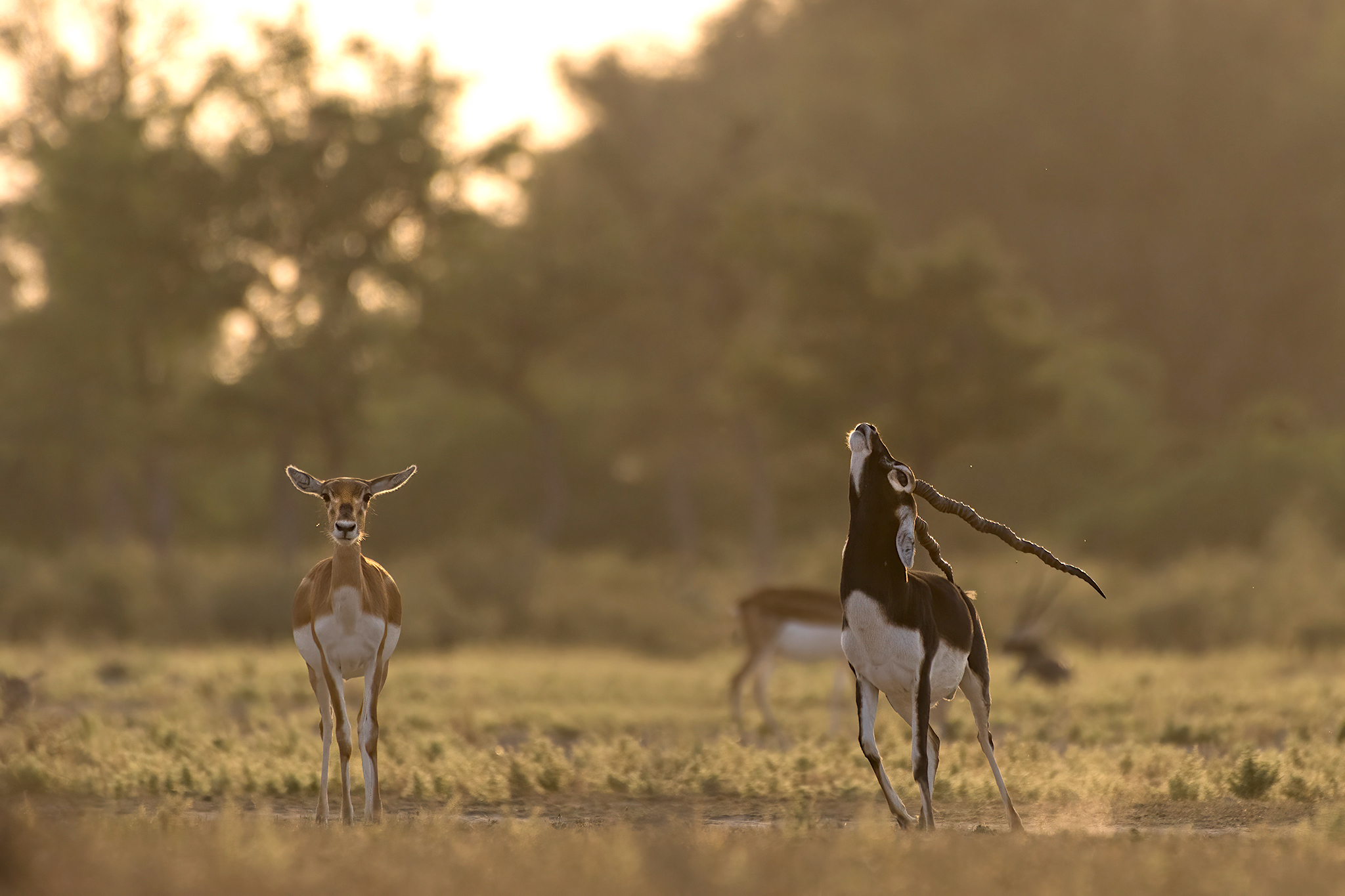 On the hot baking plains of the Point Calimere Wildlife Sanctuary, Tamil Nadu, I watched a male blackbuck pawing the ground, already black with his droppings. He leaned forward, urinated, and defecated in full view of two distant rivals. Big job done, he stood upright and wagged his tail as if to fan the air of the stink. He seemed to be proud of his bowel movement, strutting with his head thrown back and tail curled up. He was so full of himself I expected him to challenge the other males, but instead, he lay down right on top of his droppings. I couldn’t help wrinkling my nose in disgust at his gross personal hygiene. His flashy white belly may smell rank to bipedal primates like me, but to does in heat, he must be irresistible.

These dung heaps are the pride of blackbucks in the breeding season Every adult male adds his droppings to the same two or three spots, which become visual and olfactory signposts of their territory and stud-hood.

During the blackbuck breeding season, called rutting, blackbucks establish territories with plentiful grass and water right in the paths of hungry does. The way to females’ hearts is through their stomachs. When a herd of females is enticed by the greenery, the males smell their visitors to see which ones are receptive to courtship and sex. The does in turn give their smelly latrines a good sniff. If they are in heat and like what they smell, they allow the males to mount them. No wonder the bucks make a great show of their bodily evacuations and then sprawl on their waste as if atop a throne. This is how blackbuck dates work across the Indian subcontinent. 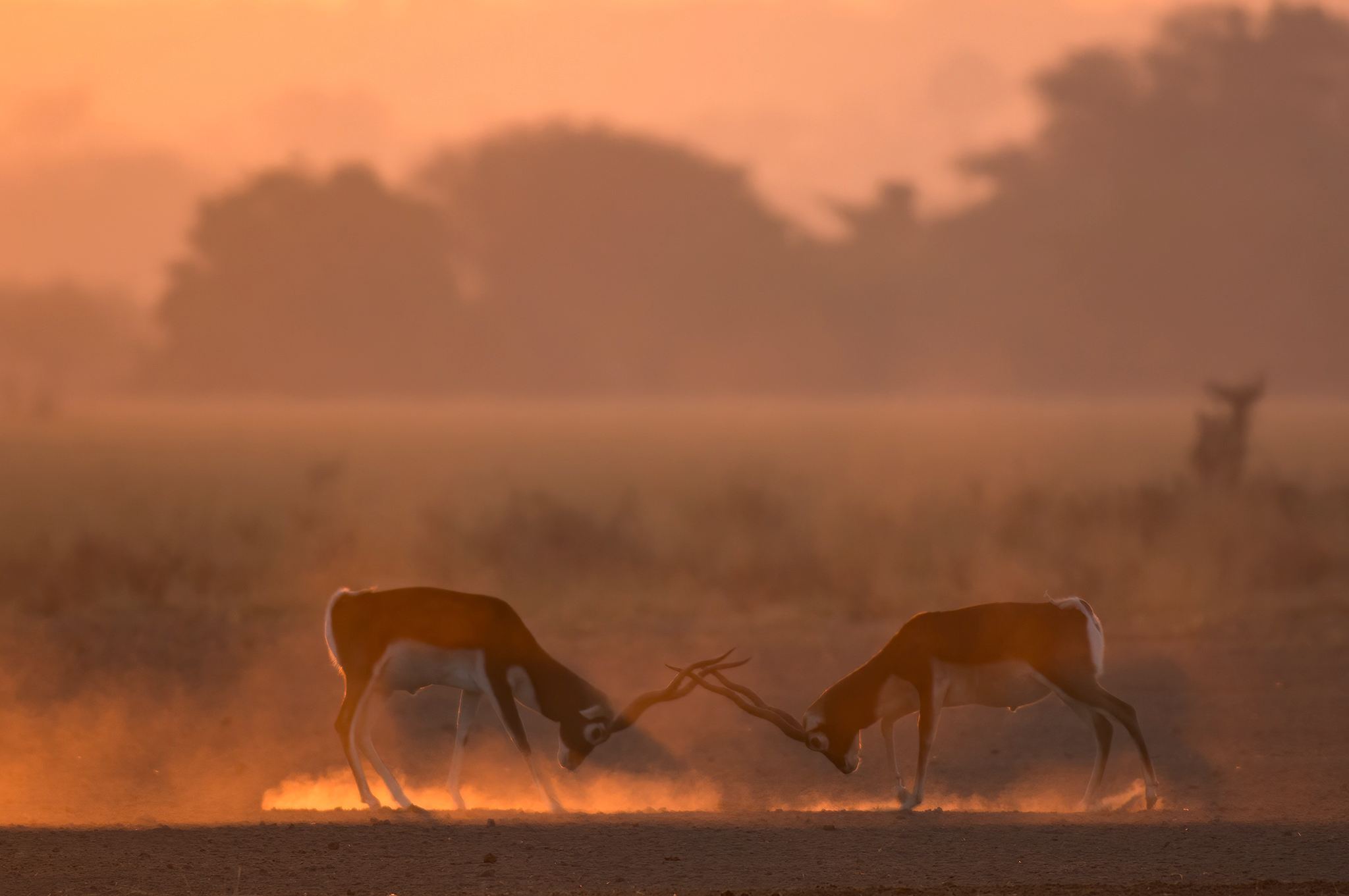 Rival blackbucks lock horns, jostle, and try to gore each other to take possession of a territory.

In two areas, however, the bucks adopt an exceptional strategy called lekking. In Tal Chappar in Rajasthan and Velavadar in Gujarat, groups of males set themselves up in open, barren areas with no forage at all. With nothing to attract females, this method seems designed for failure. However, competition between the males for a spot at the centre of the bare stage is intense. By peak season, up to 100 of them may be jammed into an arena the size of a football pitch called a lek. Each male holds an area ranging from 20 to 100 metres in diameter, with the smallest territories at the centre. Since they are cramped so close together, settling border disputes is a challenge. They have no time to feed or rest as they have to keep neighbours at bay.

Blackbucks establish territories with plentiful grass and water right in the paths of hungry does, since the way to females’ hearts is through their stomachs.

Why do the bucks invest so much time on a barren piece of land that appears to stand no chance of enticing hungry does? Surprisingly, by the fading light of the evening, females in heat visit individually or in pairs, going from one male to the other until they reach the middle of the action. They don’t come for good food but to inhale the dung piles and ogle at the bucks, which put on a show by holding their heads up and grunting. After weighing the options, each doe settles for the one that catches her fancy.

What makes blackbucks choose these different strategies — setting up territories with and without forage? Kavita Isvaran at the Centre for Ecological Sciences, Bangalore, figured that where few does graze in small groups, the bucks tend territories that are spaced out and encompass large areas. In such cases, they use forage to draw females to them instead of going in search of them.

Males form leks in places where females live in large herds numbering several hundred. But it is a costly strategy. Bucks lose weight since they have little to feed on while quarrelling with their neighbours all day. The fact that they persist with this strategy must mean that it more than makes up for the drawbacks. 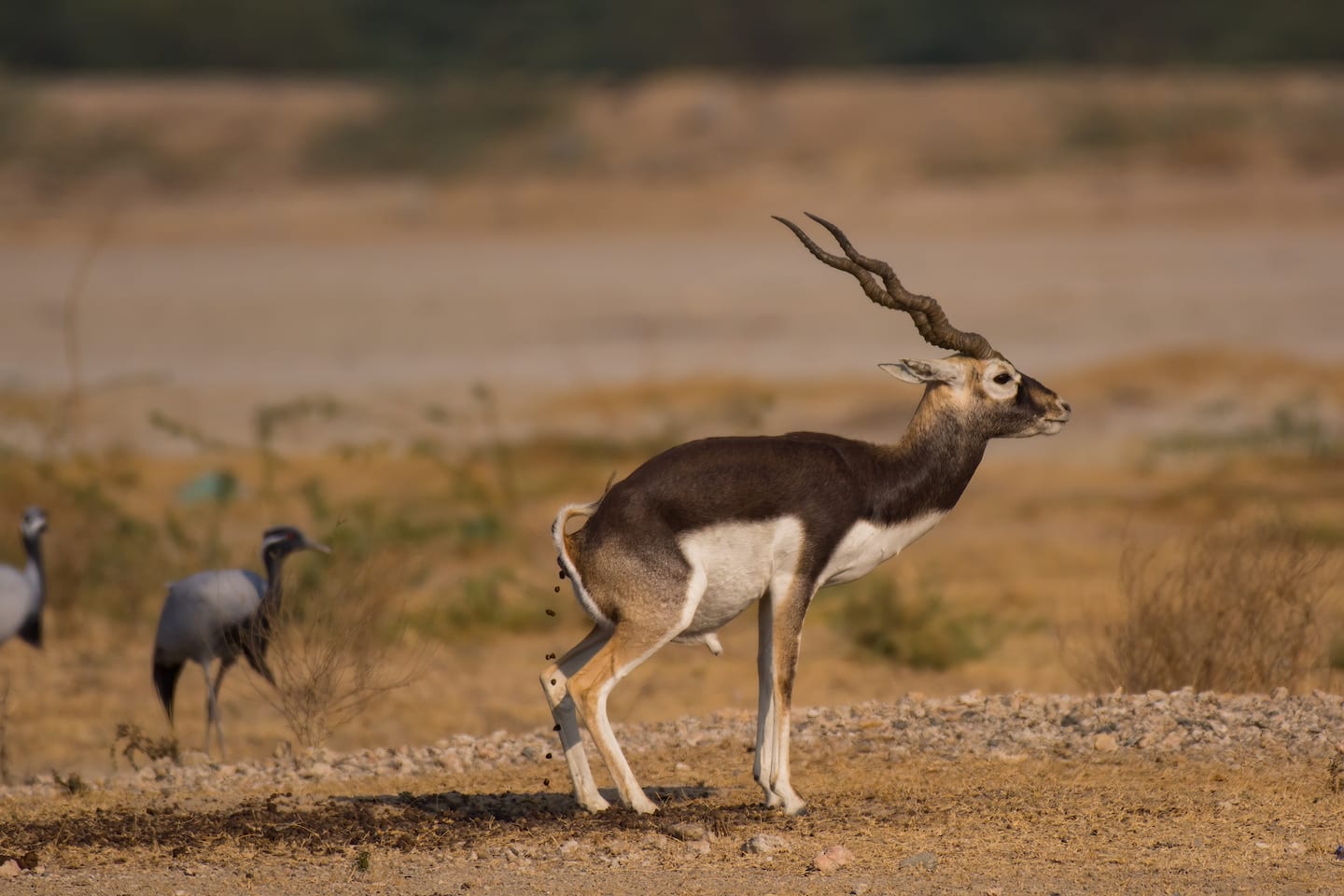 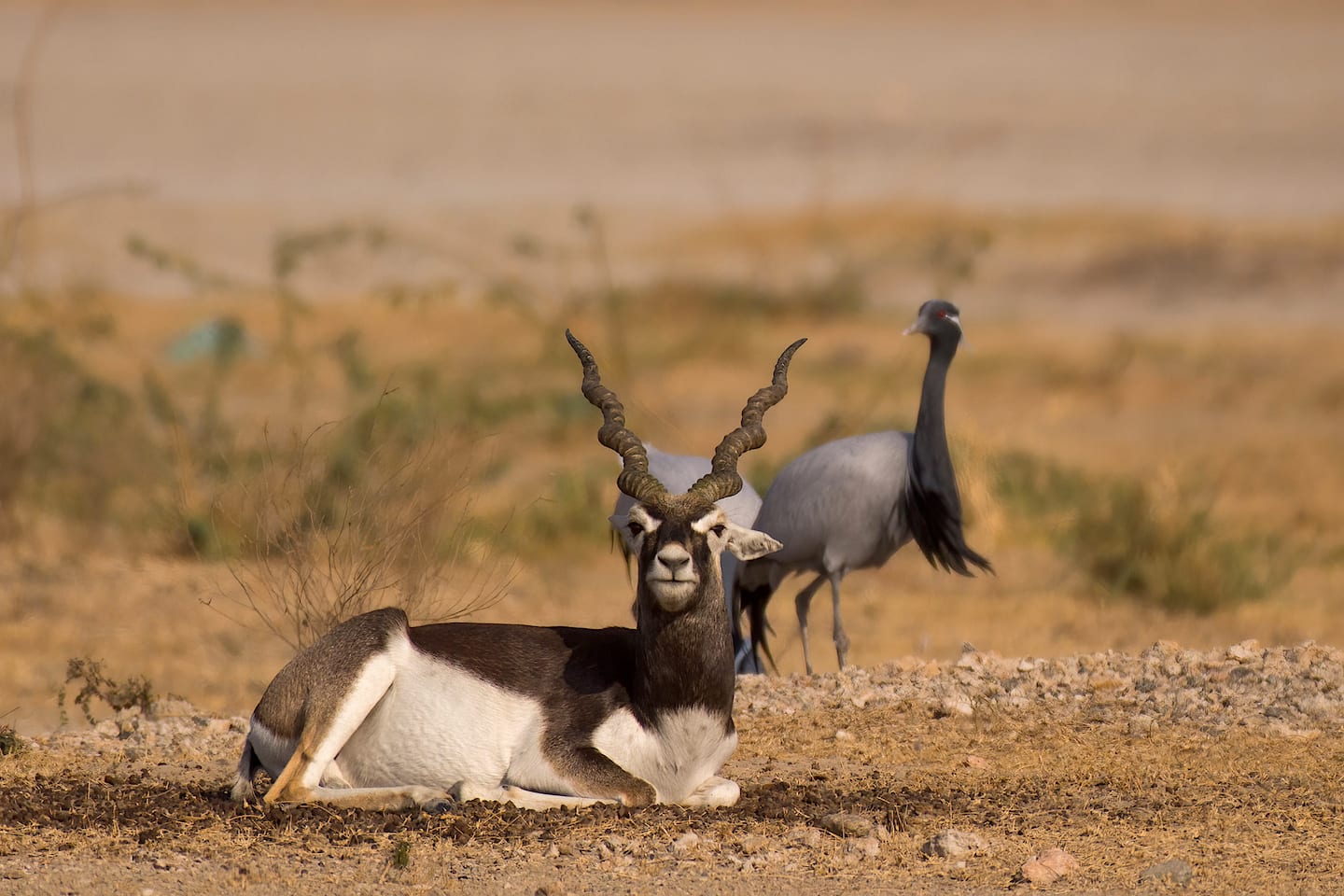 Every territorial male adds his droppings to the same two or three spots, which become visual and olfactory signposts of their territory and stud-hood.

Perhaps mating in a crowd on a lek reduces the risk of being killed by a predator. Or the lek is formed at the intersection of several female ranges. Another possibility might be that females can choose among several mates in one spot. Since males keep their territories free of rivals in a lek, they inadvertently offer a harassment-free experience for females. I wondered if any of these reasons explained the strategy.

Isvaran, however, concluded that none of them were really accurate. The does don’t care for the size of a buck’s property as much as the mate’s location within the lek. The fierce competition guarantees that only males in peak condition hold ground in the crowded heart of the lek. The does find these studs most desirable while ignoring the weaker bucks on the periphery.

If the centre of a lekking arena is the sweet spot for females, only a few bucks gain while the majority on the periphery have everything to lose. They get neither food nor sex. The one reason these antelopes persist, according to Isvaran, is the chance of taking centre stage with time.

All this raises another fundamental question: if poop is such a big part of laying claim to their prized territory, how do these male antelopes manage when they don’t eat much? 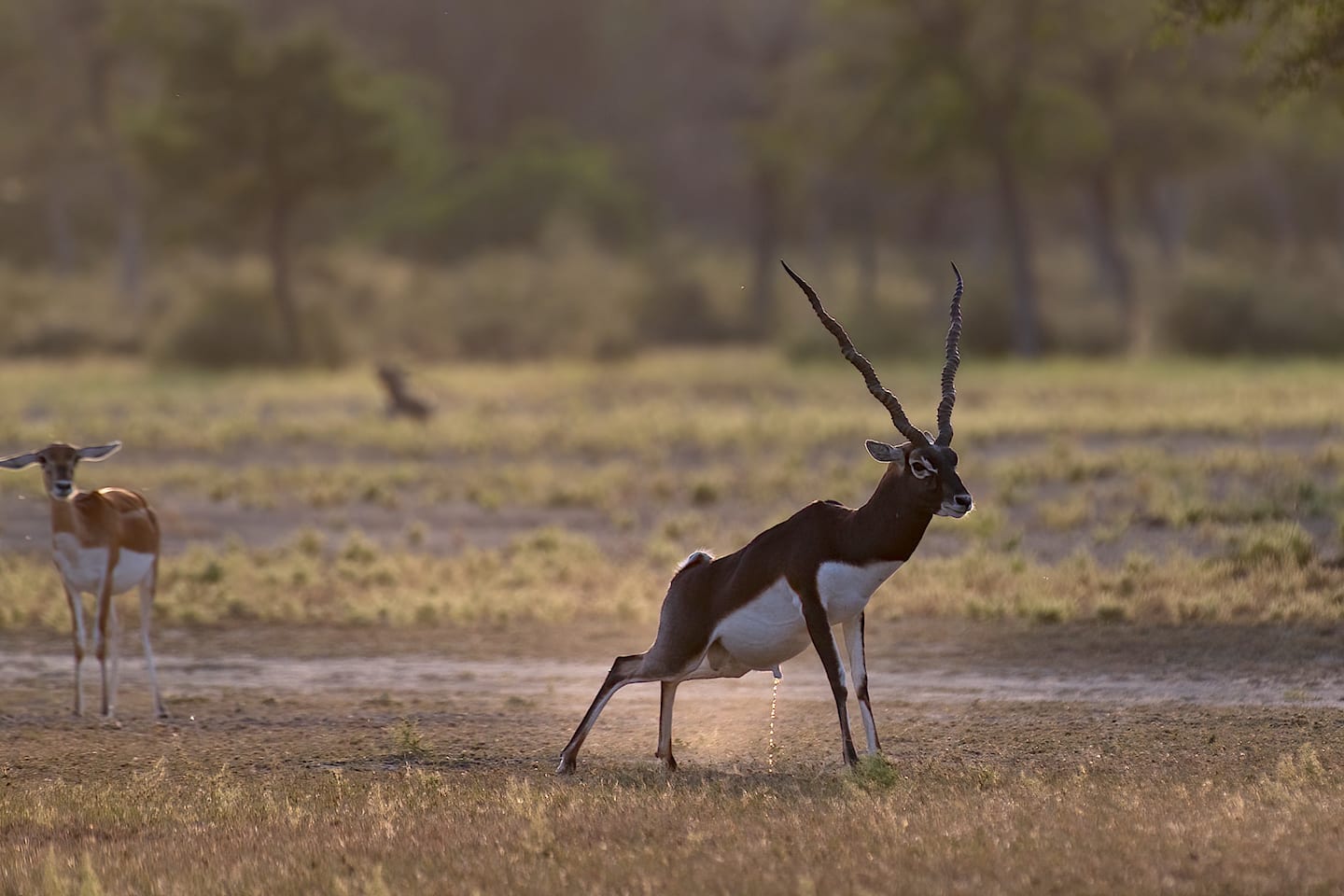 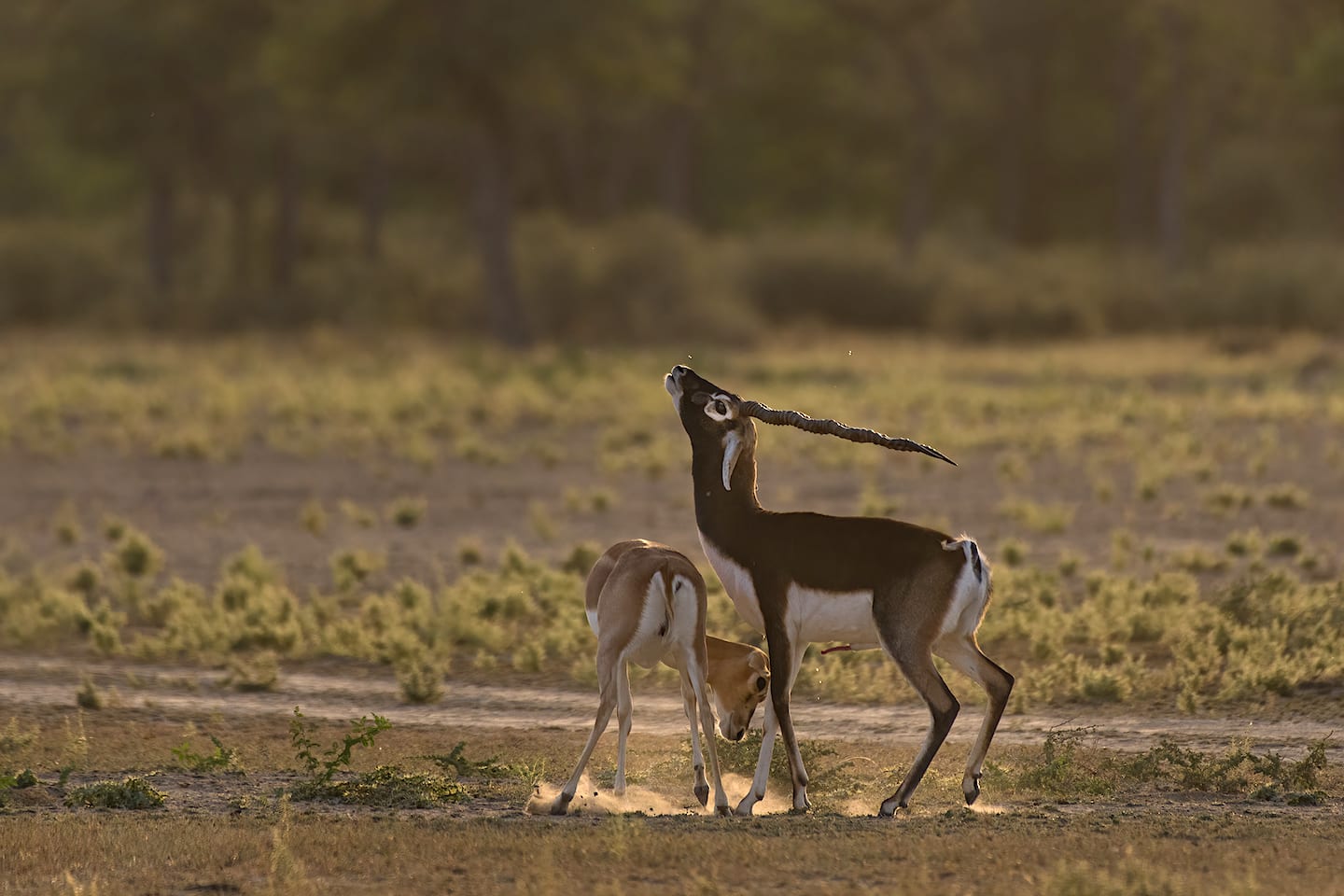 Males smell any doe entering their territories to see if she is receptive to courtship and sex. The doe in turn gives the males’ smelly latrines a good sniff. If she is in heat and likes what she smells, she allows the males to mount her.

“I have been puzzling over this for a long time now,” Isvaran replied. During peak mating season, each day a buck retains his hold on his lek counts. The males cannot afford to leave their territories unattended while they get a bite. As soon as their backs are turned, their coveted spots will be taken. The first act of usurping bucks is to urinate and defecate on the dung pile, marking the spot as their own.

“It is possible that the dung pile represents a history of territory ownership,” the researcher said. If does sniff the odour of two males at one latrine, they avoid the posturing stud who hasn’t proven his staying power. Since only the strongest males can keep rivals out inspite of starving for a period of time, the females probably view any recent owner as not being good enough.

“Presumably, the male holding a popular territory is in a real bind,” said Isvaran. “If he does not leave the lek to feed, his supply of dung will soon dry up. I would really love to study how they resolve this problem.”

For blackbucks that lek, the way to females’ hearts is paved with lots of dung. But their dilemma is how to poop with little forage at hand.