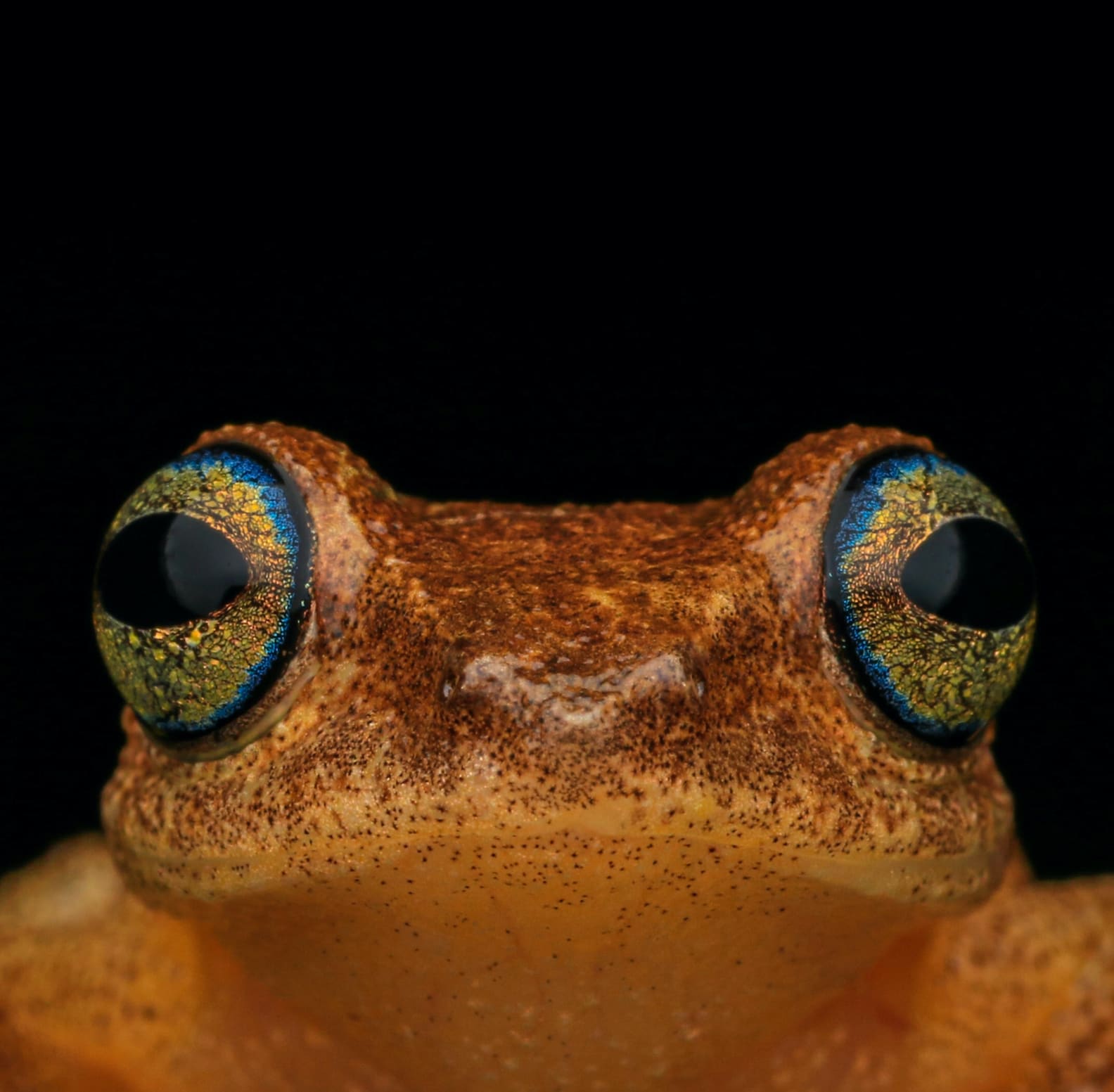 About 20 years ago, I discovered the montane mosaic of sholas and grasslands in the Upper Nilgiris of the Western Ghats and decided to study vertebrate communities there for my PhD. Having worked before on olive ridley turtles on the Chennai coast, I naturally gravitated towards the herpetofaunal community. On my first visit, I saw plenty of spiny lizards (Salea horsfeildi), probably a vine snake or two (Ahaetulla perroteti) and maybe even a horseshoe pit viper (Trimeresurus strigatus).

But my main interest was in how diversity varied between small and large sholas — patches of montane evergreen forest surrounded by a sea of grassland. Building on Robert MacArthur and EO Wilson’s theory of island biogeography, which provided a framework for understanding species diversity on islands, many ecologists had started to study habitat “islands”. Since forest fragmentation had started to create such isolated patches of forests, such studies were believed to be important for conservation strategy. I was interested in groups of animals that had many species, such as forest frogs and shieldtail snakes. 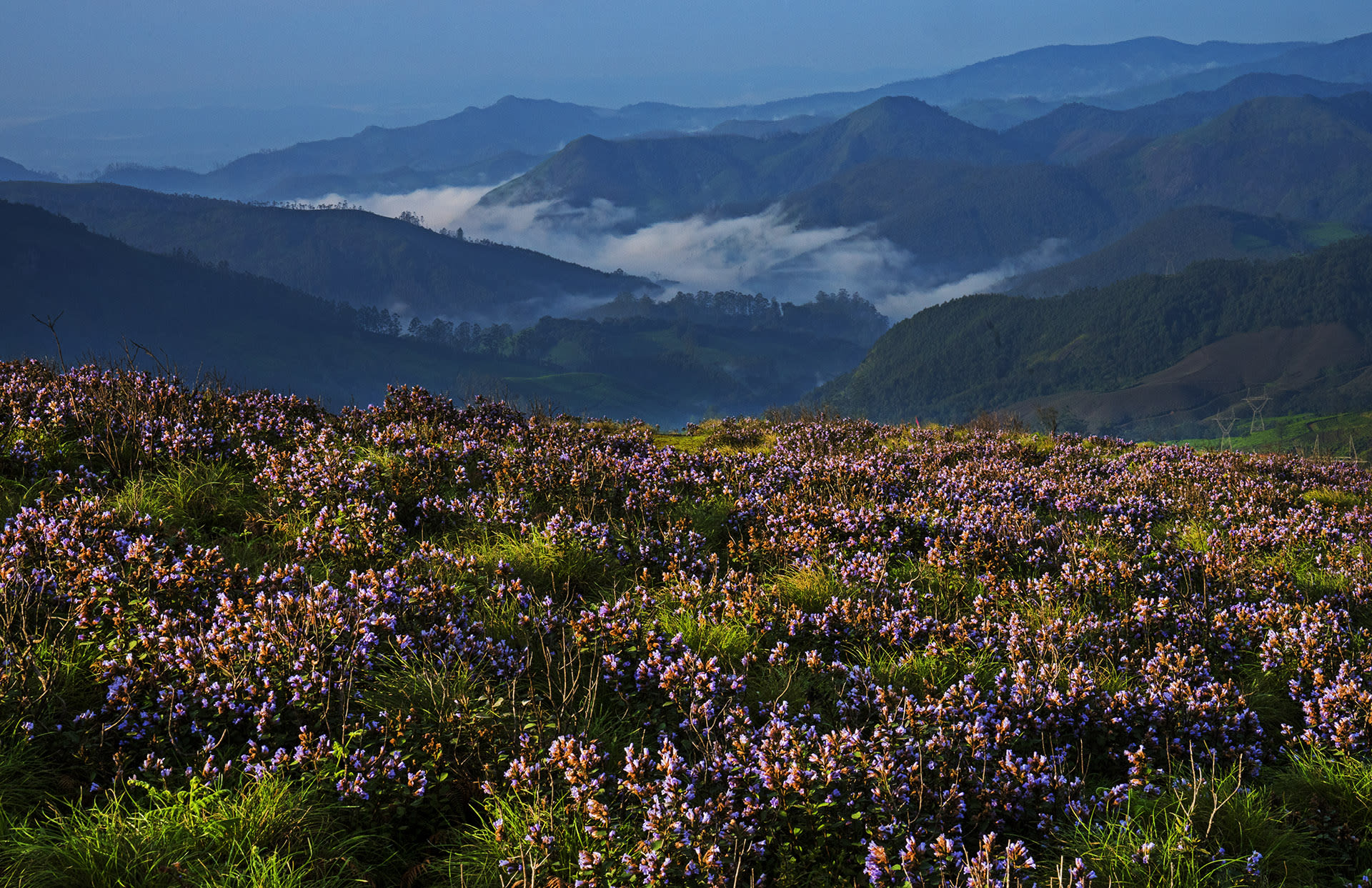 Shola grasslands are found in the higher reaches of the Nilgiris, the Anamalais, and other massifs in the southern Western Ghats. Kurinji flowers once in 12 years in these hills, turning the hillsides violet/blue. Photo: Dhritiman Mukherjee
Cover: The blue-eyed bush frog (Raorchestes luteolus) is endemic to the Western Ghats and is found in Coorg and its neighbouring regions.
Cover photo: Sebinster Francis

I arrived in the Nilgiris in December 1992 and stayed at Avalanche, with photographer and filmmaker Saravanakumar, who was then a student working on a project mapping the sholas of the Upper Nilgiris. We stayed in a poorly insulated room and crawled under our blankets by 9 pm to avoid the cold. The days were spent trekking to the top of various hills to find suitable vantage points to map the landscape. While Sara marked sholas by the contours of the hills on topographical sheets (these were the days before GPS units), I searched for frogs and snakes.

Further along the road was Upper Bhavani, a little Electricity Board settlement beside a large dam, and the entry point to the southern section of Mukurthi National Park. I made this my base for the next several years. The Electricity Board allowed me to rent one of their staff houses, an old Inspection Bungalow (which meant my address was IB, EB, UB). 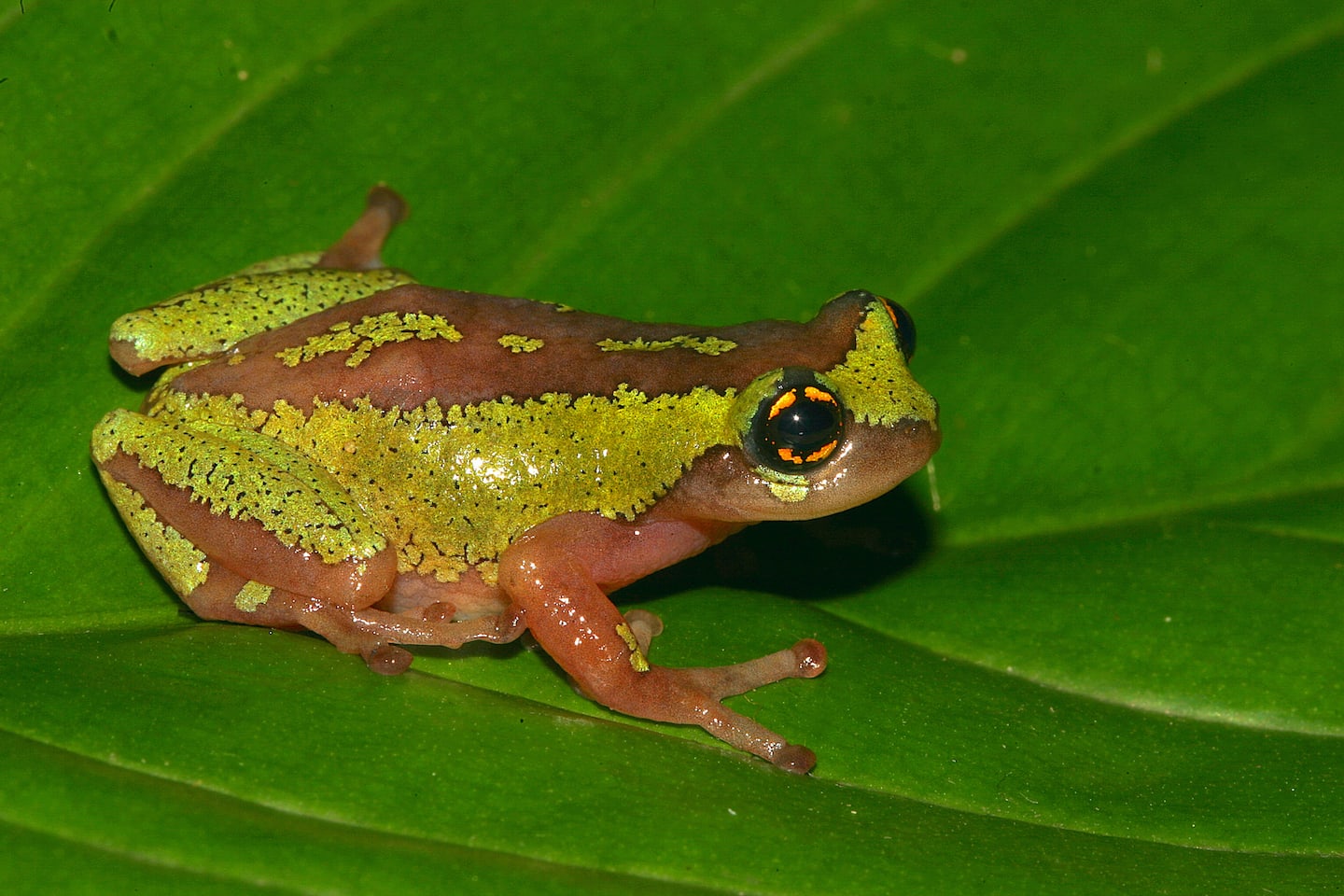 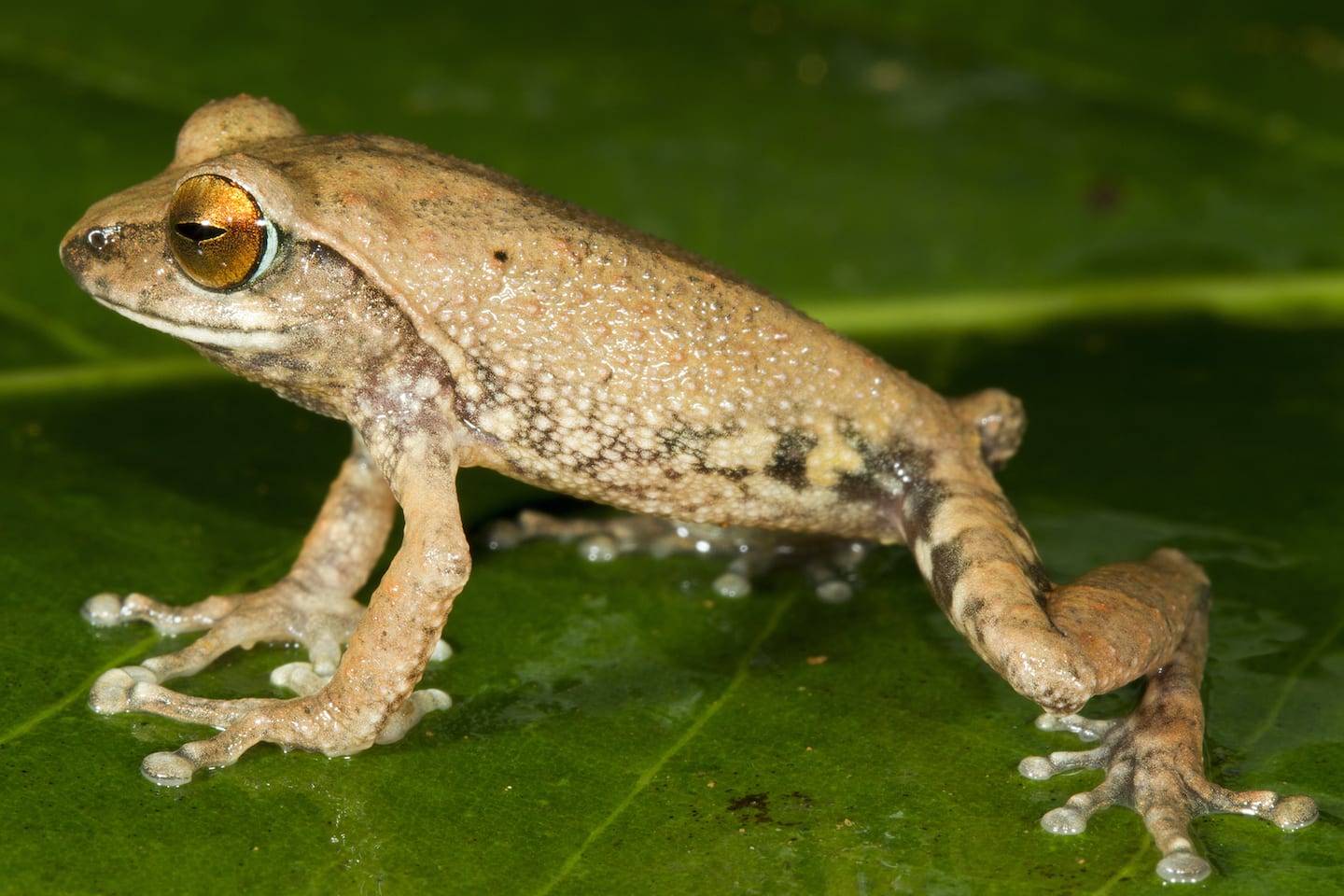 (Left) The mottled yellow-eyed bush frog (Raorchestes flaviocularis) was discovered by SP Vijayakumar et al in a disturbed forest fragment of a tea estate in the Meghamalai massif in the Western Ghats (Right) as was Raorchestes aureus, from the high elevations of the Elivalmala massif, named after its golden iris. Photos: Davidvraju, CC BY-SA 4.0 (left), SP Vijayakumar (right)

I spent my days searching for shieldtails and frogs but more importantly a field assistant. I found Mayavan, who had grown up in the region and was familiar with the landscape. We quickly realised that we had a problem. Shieldtails are burrowing snakes that are very hard to find. After weeks, the only ones we found were roadkill. I turned my attention to frogs. While there were other species as well, we encountered a particularly large number of bush frogs of the genus Philautus. I could not identify the various different forms I encountered, but then, neither could anyone else. One of the first bush frogs I came across was spectacularly starry eyed – not unlike the young researcher I was – which would turn out to be Raorchestes signatus. Another striking resident of the Upper Nilgiris was the green tree frog, Ghatixalus variabilis, then known by a different scientific name.

Eventually, I decided to work on the abundance and diversity of small mammals in the landscape and spent years going from one shola to another, on long drives and longer treks, lugging hundreds of rat traps, and catching, marking and measuring a range of rats, mice, and shrews. Mayavan was an indispensable collaborator, and claimed he could identify species by their smell, and the sex of the animal from its facial features, or in local lingo “face cut”.

The star-eyed tree frog (Ghatixalus asterops) has a golden star-like pattern on its iris. Found in the southern Western Ghats, this frog is green as a juvenile and grey-brown with patches as an adult. Photo: Sebinster Francis

It was a barrel of fun, but I remained fascinated with bush frogs. They had loud, persistent calls, but were always hard to find, and harder to identify. Years later, when SP Vijayakumar joined my lab as a student in my first year as faculty at the Indian Institute of Science (IISc), it would become his obsession and my vicarious pursuit. As part of his research, Vijay carried out fieldwork across the entire Western Ghats, literally climbing every mountain to sample these frogs. He proposed theories about the evolution of these frogs in the Western Ghats, highlighting the role of both geological and geographic processes. Typically, frogs isolated on mountain tops diverged from each other resulting in new species that looked similar but were genetically very different. He also described nine new species of bush frogs.

Twenty-five years after I encountered my first Philautus, the genus, now called Raorchestes, is the centrepiece of our work on the ecology and evolutionary biogeography of the Western Ghats, at IISc. Along the way, Philautus Frog would also embark on an adventure to find the Big Sea in a children’s story I wrote. 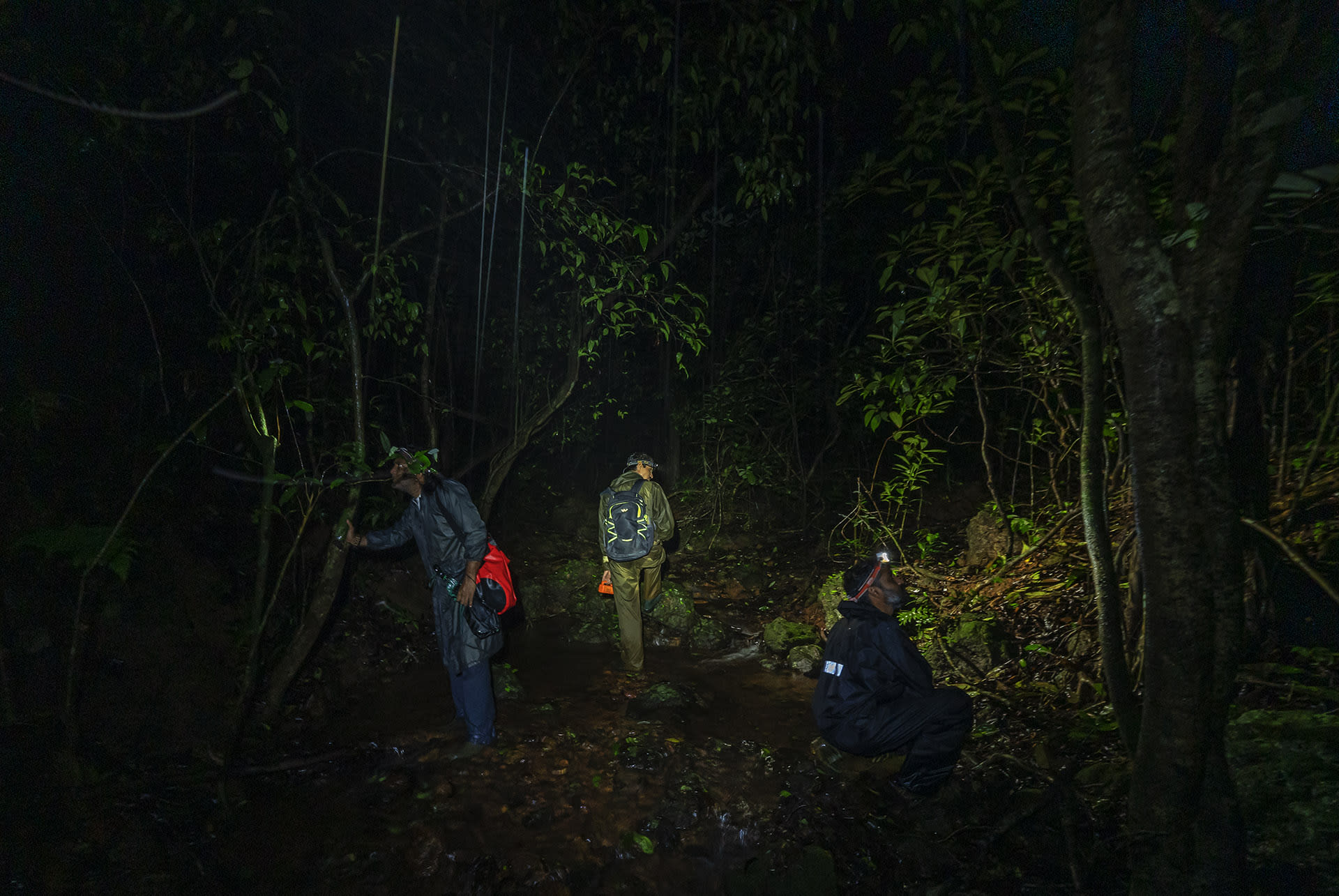 Herpetologists explore the forests of the Western Ghats in the middle of the night with torches and headlamps looking for frogs and geckos.
Photo: Dhritiman Mukherjee

Our work at IISc extends to other genera of frogs, but also lizards and snakes. Over the next decade, many students and researchers have studied these groups using a suite of tools including extensive field studies, ecological modelling, and molecular genetic analysis. Across all the studies, we found fascinating patterns. The Palghat Gap is a low mountain pass between the Anamalais and the Nilgiris, at an average elevation of just 140 m. This gap, already known as a barrier to the dispersal of species on short time scales, was also found to separate taxa across millions of years. For example, the northern and southern clades (groups of related species) of bush frogs separated from each other more than 15 million years ago. The southern Western Ghats proved to be a particularly rich repository of species, including several deeply divergent frogs, lizards, and snakes, many of which we described as new species or even genera. We believe that the region may have served as a refugium during the Pleistocene glaciations, when other parts of the ghats and peninsular India were not habitable.

Over the years, we have studied evolutionary history to understand how species originate and diversify, and how this leads to the patterns of endemism and diversity we see. French biologist and historian, Jean Rostand’s oft repeated quote “Theories pass. The frog remains,” is an endorsement of the persistence of facts. But one could interpret that differently. As much as we have learned about ecology and evolution, perhaps the frog always has more to teach us. 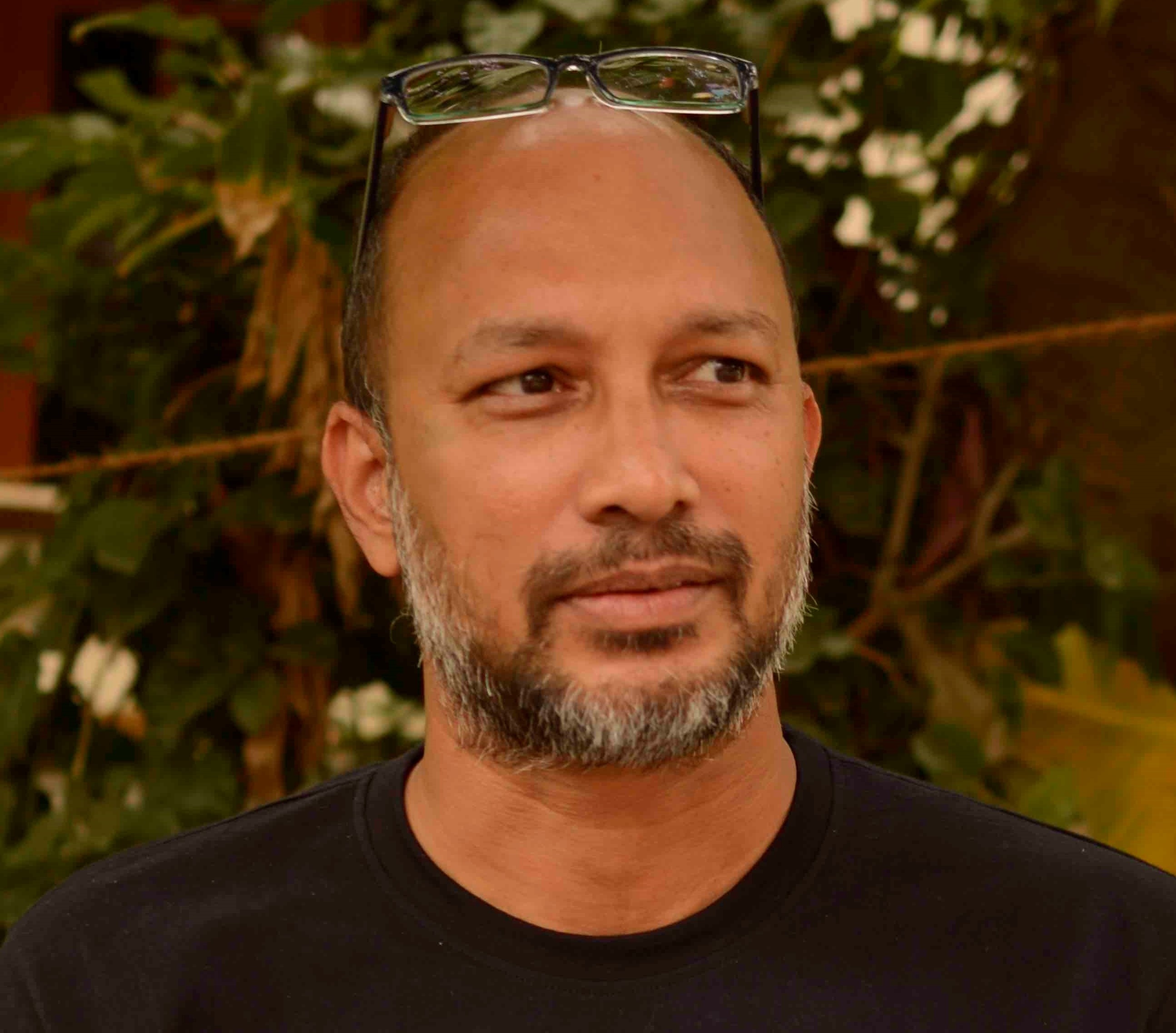