Breaking gender stereotypes, tough bull crocs often pitch in to take care of hatchlings. Scientists believe they could be showing off their potential as future mating partners

Most reptile parents can be charged with offspring negligence. Fathers disappear as soon as the fun part, the mating, is done. After laying their eggs or giving birth, the exhausted mothers abandon their progeny to their fate. Exceptions exist to prove any generalisation wrong. King cobras make nests and guard them. Most species of pythons use the same muscular coils that kill to incubate their soft-shelled eggs. Some rattlesnakes and pythons stick around with their hatchlings for a few days. The others — lizards, turtles, and snakes — however, leave without so much as a backward glance.

Crocodilian moms buck this trend, going to greater pains than the most diligent snake mothers. A maternal mugger crocodile crawled out of a pond at the Madras Crocodile Bank as she had done every night for two months. With her bumpy hide glistening in the moonlight, she hiked up the steep slope to the nest site. Nothing gave away the spot where her eggs lay buried, and no one else would have guessed its existence. A few moments of rest later, she began digging. She must have heard her babies’ muffled cries from underground. The activity attracted the father who swam over from the far end of the pool and watched the proceedings as the sand she dug rained down on him.

When she uncovered the nest, the hatchlings’ calls were loud enough for me to hear, standing on the other side of the enclosure wall. She scooped up two in her big toothy mouth and slid down to the water’s edge. After releasing them with a shake of her head, she returned to gather more and carry them down. I was touched by her care.

The crushing bite of a crocodile, such as this mugger crocodile in the Chambal, ranks among the most powerful of the animal world. Cover: Male gharials often protect their rivals’ offspring.

Stuck halfway out of its egg, a hatchling bawled. The bull croc chased the mother, and being smaller, she didn’t quibble. He then went over, picked up the egg and crunched with his enormous jaws. My heart constricted with sadness. I assumed the little thing would be crushed. He carried his booty, slid down to the pool and shook his head until the gleaming white eggshell fell out. The baby was alive and well, as it swam over to join its brothers and sisters. Still uncertain, I feared for the lives of the other hatchlings. The crushing bite of a crocodile ranks among the most powerful of the animal world, but this father rolled the other half-hatched eggs in his mouth and squeezed gently until the babies squirmed out. He walked back and forth, cradling the young in his cavernous maw to the water. He showed no sign of the gender stereotype common in mammals.

By the light of the next morning, the gnarly tough male presented a ridiculous sight. About twenty little replicas perched unceremoniously on his head, nose, and back while he stared at egrets, crows, and humans. If any intruder approached, he rushed with his mouth wide open, keeping them at bay and leaving the babies treading water. He didn’t wander from his creche for a few months.

Since then, I’ve observed male gharials being caring fathers. It’s not unusual to see these sleek crocodilians, recognisable by the distinct bulbous ghara on the tip of their long slender snouts, wearing a head arrangement of precariously perched babies. Over the preceding months, these bulls beat up other adult males that had the temerity to enter their territory.

In the wild, females in their prime coast up and down the river, checking out what’s on offer. Who they pick as a mate probably depends on his fixed assets. Other females may share the same taste, and they all nest on the same riverbank. Several nests hatch within days of each other, and the dominant male and one or two of the mothers collectively protect the hatchlings. 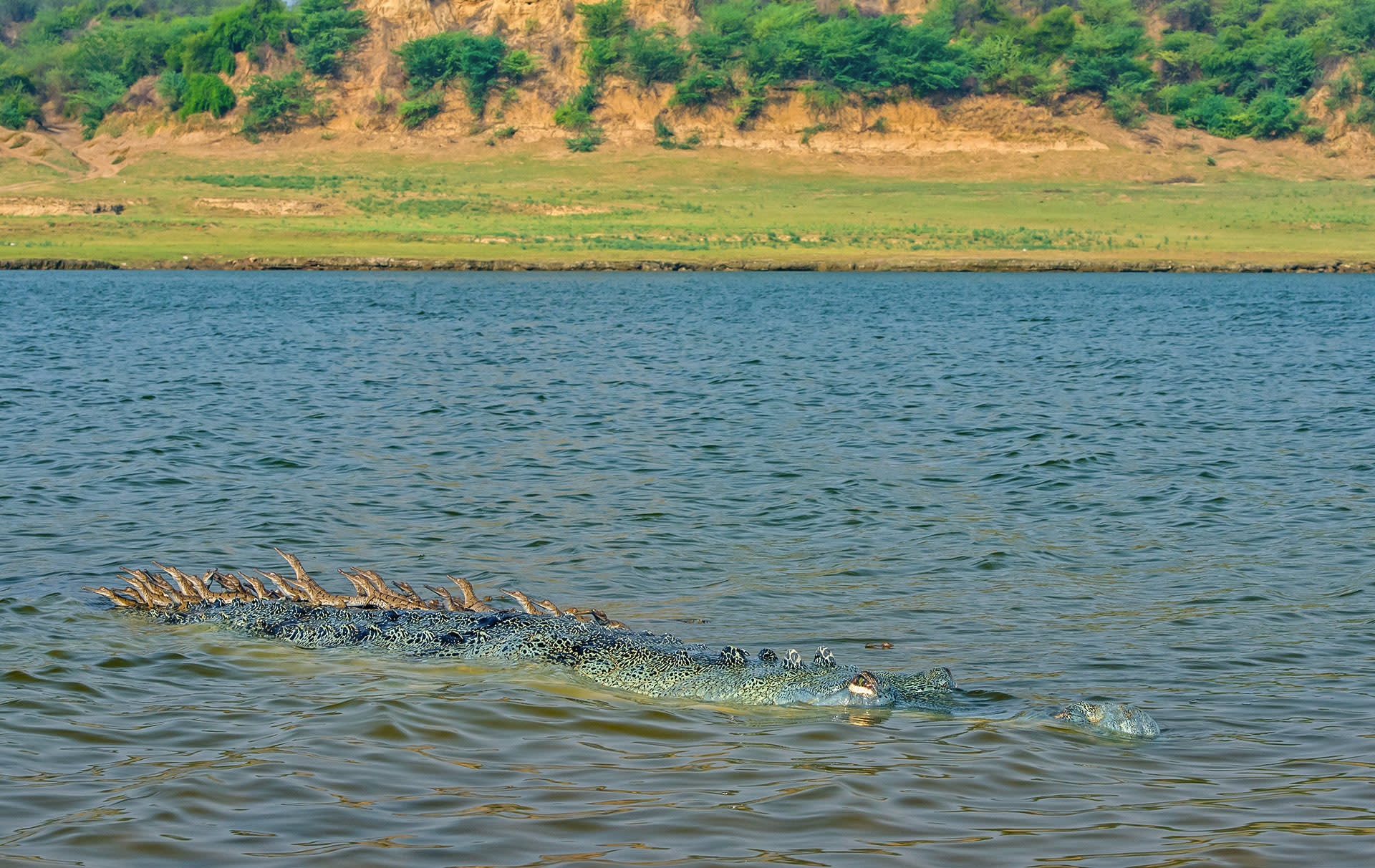 Gharial hatchlings survey the world from the safety of an adult male’s back.

Danger can come day or night, from the air, land, or water. Fish eagles, woolly necked storks, and even other gharials that would not think twice before gobbling up offspring of their own species wait for the opportunity. Sometimes, attacks may occur on several fronts, keeping the parents busy. Defending the creche is a full-time job when summer is at its worst and the adults haven’t had a good feed in months. But some young males go out of their way to take on another’s burden.

In recent years, Jeff Lang and Indian researchers, of the Gharial Ecology Project working in the River Chambal, observed that the guardian is often not the likely father. For instance, one young adult didn’t join the others during the drama of rivalry and courtship of the breeding season but assumed the role of defender-in-chief when the hatchlings emerged. He repeated this performance the following year too. Another male chased away the biological father who had ruled that section after defeating rivals. Even though these surrogates had no obvious vested interest, not being the sires of the offspring, they took over the babysitting duties and worked with the mothers to fend off predators.

The busy mating season, fighting challengers and having sex with females, may exhaust the biological fathers. Lang and his team have observed that the oldest, most successful breeding bulls often relinquish the guarding responsibilities to their younger, more energetic peers.

What’s in it for the surrogate males who spend their energy defending the brood of a rival?

They are likely apprenticing, perhaps honing their parenting skills, says Lang. By pitching in, they convince choosy females of their potential as future mating partners.

An adult gharial keeps an eye out for danger that can come from the air, land, or water.

Female gharials possibly prefer mates who have the finest territory and are also adept at handling domestic chores. Indeed, the researchers noticed that one of these stand-in fathers became a sire in subsequent years.

“We need genetic evidence to pin the above conjectures down scientifically,” says Lang. “But for the time being, this is our best guess.”

When the monsoon reaches full force a few weeks later, the parents, biological and surrogate, abandon their charges and swim down the swollen river to fertile fishing grounds at the confluence of the Chambal and the Yamuna. By then the hatchlings gain strength and experience in catching their minnow prey and dealing with water currents.

Come September, the adults return to their former haunts. As the weather cools and the winter chill hangs heavy in the air, dominant bulls turn into crocodilian gladiators, sparring for dominion over sections of the river with choice basking and nesting banks. Previous year’s babysitters may become present-day fathers. In subsequent years, they’ll be replaced by other males who floor the gharial ladies with their au pair skills.