Locusts and grasshoppers are two forms of the same creature, but a series of chemical reactions turn these lonely hoppers into giant swarms of invasive insects 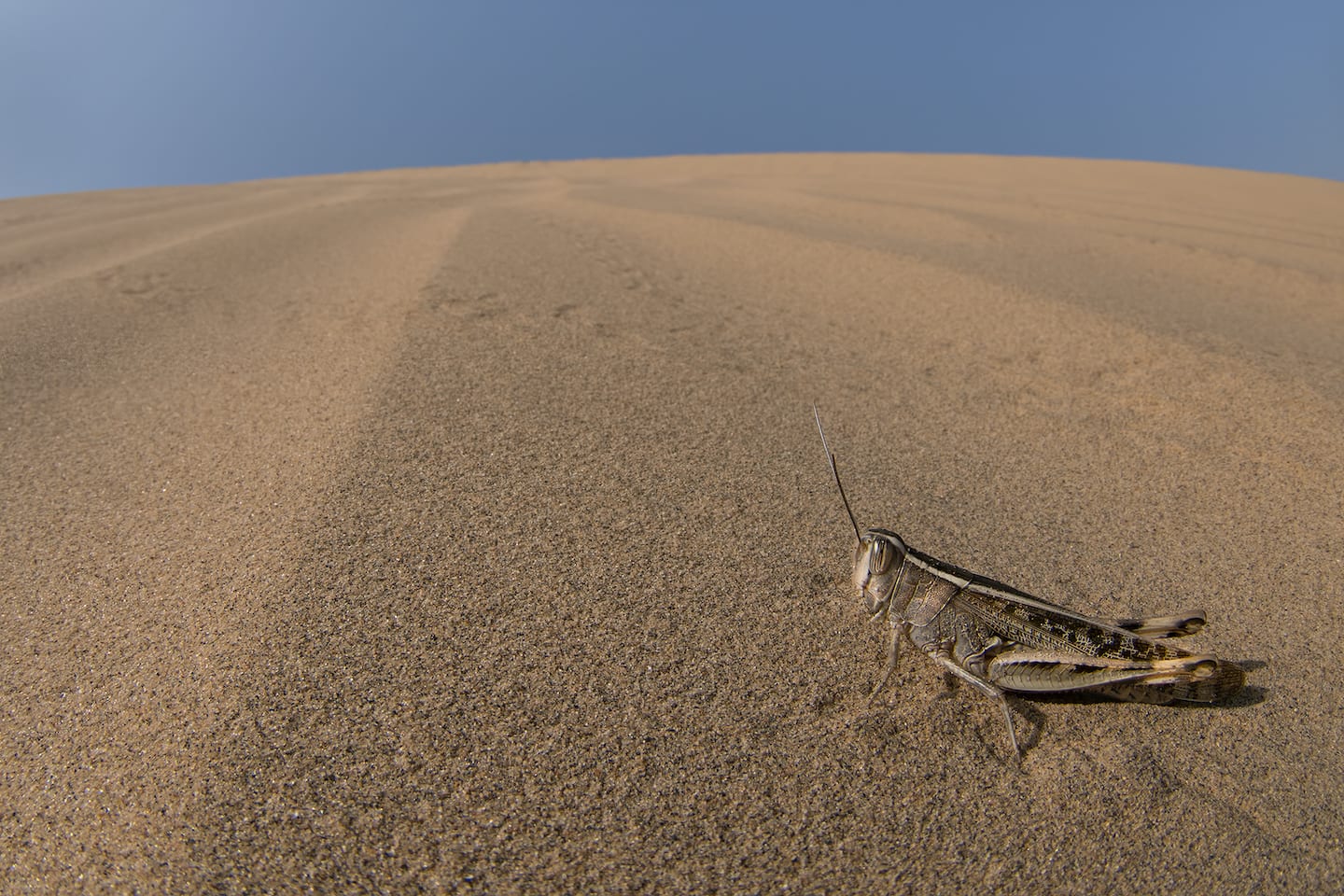 It was a losing battle. Grasshoppers wouldn’t leave my kitchen garden alone. I sprayed tobacco juice and neem oil extract, separately and together, in dilute and strong blends. I was hoping the insects would abandon their pursuit of my plants. When my methods didn’t work, I picked the insects one by one and crushed them in the evenings, but there were many more by morning, chewing the tomato plants, spinach, and basil down to their nubs. I watched our neighbours spray noxious chemicals on their fields and wondered if I should abandon my herbal concoctions.

My troubles were nothing compared to the upsurge of desert locusts (Schistocerca gregaria) which swept into the country from the Arabian Peninsula in March-April 2020. I shuddered at the social media videos showing thick clouds of the pests swirling through the air and covering every surface. I imagined millions of farmers’ hearts sinking. Eventually, the locusts spread across ten Indian states, which sprayed chemicals from tractors, helicopters, and even drones. Desperate farmers raised a racket by banging steel plates to keep the insects from alighting on their fields. The scale of destruction, unseen since 1993, prompted the Ministry of Home Affairs to call it a natural disaster, and it ordered the states to undertake relief operations.

The scale of destruction caused by swarms of desert locusts, seen here at Jaisalmer, Rajasthan, led to the use of toxic organophosphates. Photo: Im_rohitbhakar/Shutterstock Cover Photo: Locusts, such as this one photographed in the Thar desert, swept into the country from the Arabian Peninsula, creating a natural disaster. Cover Photo: Vipul Ramanuj

Environmentalists and conservationists worry that large-scale drenching operations with organophosphates, such as malathion and chlorpyrifos, could be toxic to humans and natural ecosystems. Insectivorous animals such as foxes and monitor lizards, and many species of birds, from rosy starlings to raptors, can suffer poisoning from eating dead locusts. Of particular concern is the critically endangered great Indian bustard, which has already been decimated by the loss of grasslands. Researchers recommend linseed and neem oils in combating locust upsurges without causing collateral damage to other species, but these haven’t been deployed in the fields yet. After my futile experience at coating my plants with bitter-tasting liquids, I’m sceptical of their efficacy.

How do solitary grasshoppers transform into gregarious locusts?

Locusts and grasshoppers are two forms of the same creature. Normally, the long-legged green grasshoppers are loners, often jumping to another plant to avoid the proximity of others. When their numbers explode following years of abnormally high rainfall, they undergo a dramatic transformation, turning pink or yellow, becoming gregarious, and growing longer wings for long-distance flight. These restless insects behave as if they were one organism, as flocks of migratory birds do, flying in unison in one direction by day and laying waste to hundreds of square kilometres of farmlands.

How do normally shy insects handle life in a crowd?

One study of desert locusts found the repeated touching of hind legs appears to cause serotonin levels to rise in the insects’ brains. The hormone, called the “happy chemical”, promotes well-being and happiness in humans. Acting as a social lubricant, it causes locusts to not only tolerate being within touching distance of others, but to actually seek that conviviality.

Another crop-devouring species, the migratory locust (Locusta migratoria), the most widely distributed grasshopper in the world, is also found in India, where it hasn’t been as devastating as the desert locust. Researchers from the Chinese Academy of Sciences, Beijing, discovered what serotonin is to desert locusts, dopamine is to migratory locusts. 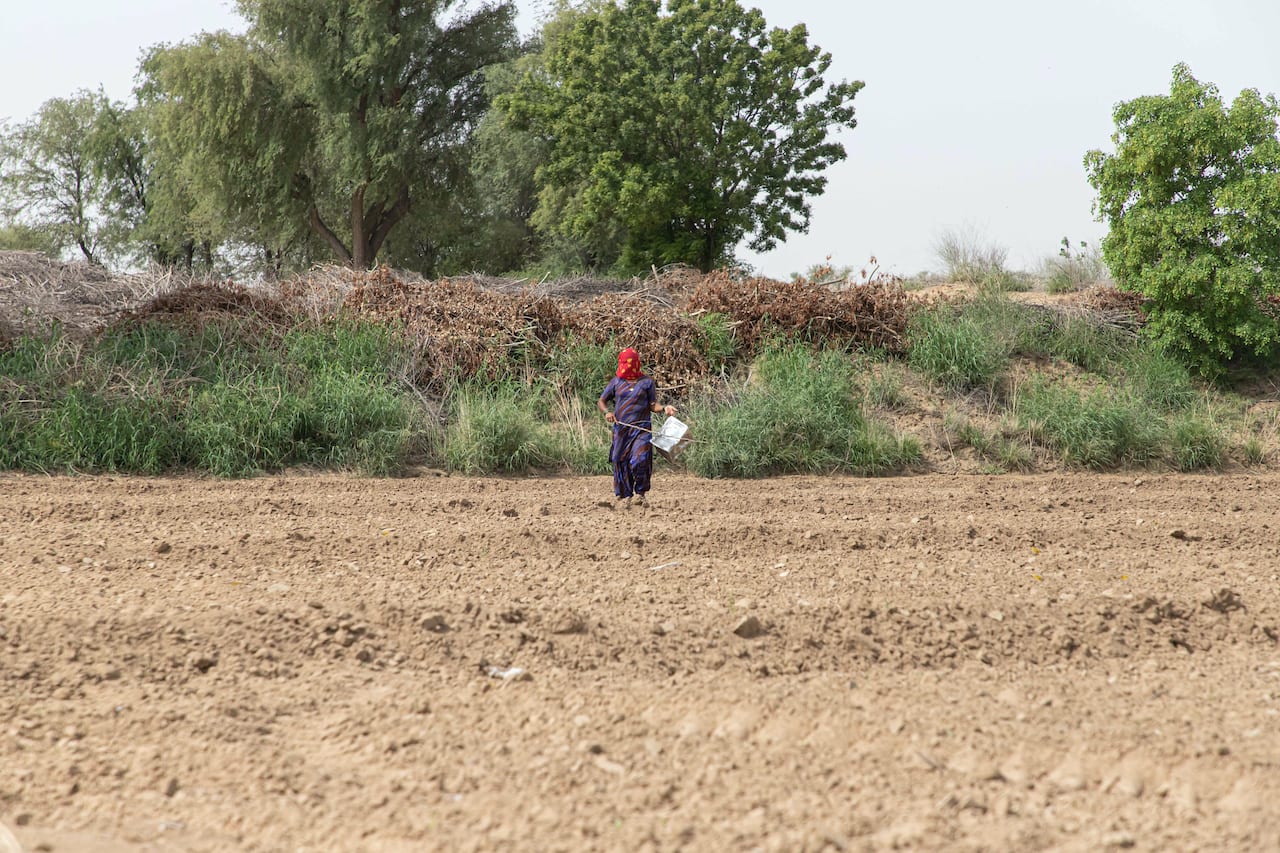 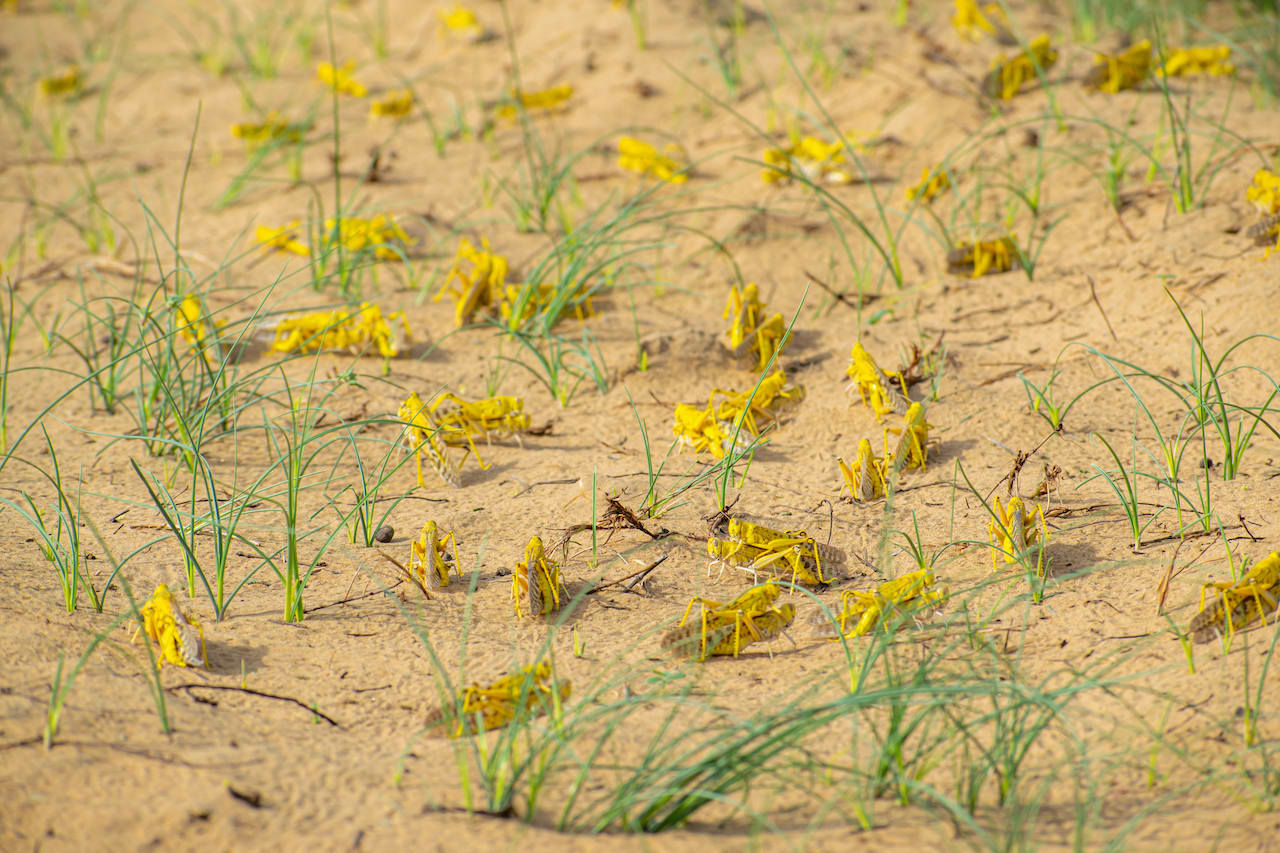 (Left) Desperate farmers, such as this woman in Hanumangarh, Rajasthan, raised a racket by banging steel plates and utensils to keep the insects away from their fields. (Right) Locust swarms destroyed crops across ten Indian states, which resorted to spraying chemicals to kill the pests. Photos: Im_rohitbhakar/Shutterstock

What, then, sparks the transformation from loners to party animals?

Locusts can see and hear, but, like other insects, they rely on scent hormones to communicate. These substances diffuse slowly into the air and spread in all directions, sending the message far and wide. For instance, male silkworm moths follow a female’s scent trail from nearly 30 miles away. Queen bees render workers infertile by secreting a compound. Similarly, locusts might give off an odour that attracts others.

The Chinese researchers analysed 31 scent compounds extracted from the migratory locusts’ faeces, and focused on six produced only by the sociable ones. They singled out one called 4-vinylanisole (4VA), which attracted males and females, juveniles and adults, and solitary and gregarious forms. This sweet-smelling substance is the key to creating a swarm.

A minimum of four to five locusts sitting together was enough incentive for them to produce 4VA, with their hind legs secreting most of it. When a group of them generate the substance, others catch scent and join it. The more they aggregate, the more scent hormone they produce, leading even greater numbers to coalesce into a swarm.

Proteins in the insects’ antenna pick up the smell molecules and relay them to nerve endings. The specific protein receptor called OR35, which detects 4VA, is located in the locusts’ feelers. Using CRISPR-Cas9, the Nobel Prize-winning gene-editing technique, the researchers knocked out the gene for this receptor to create mutant locusts that couldn’t smell 4VA. Without being able to smell it, they didn’t react, and therefore, didn’t swarm. This proved how indispensable the compound was in triggering outbreaks.

Since the desert and migratory locusts belong to different family lineages, 4VA may not be the catalyst in the former. After all, the two species use different socialising hormones — dopamine and serotonin. 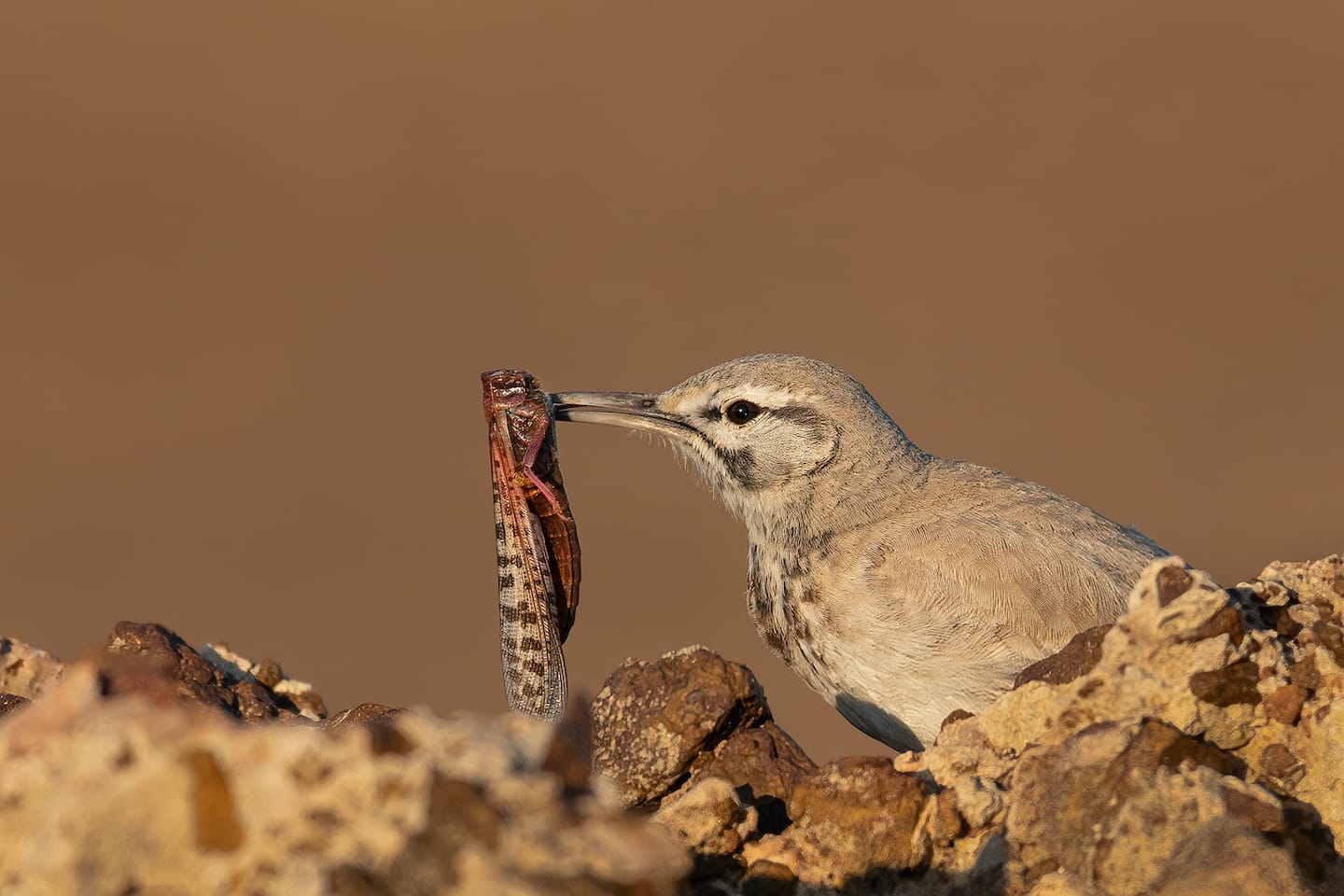 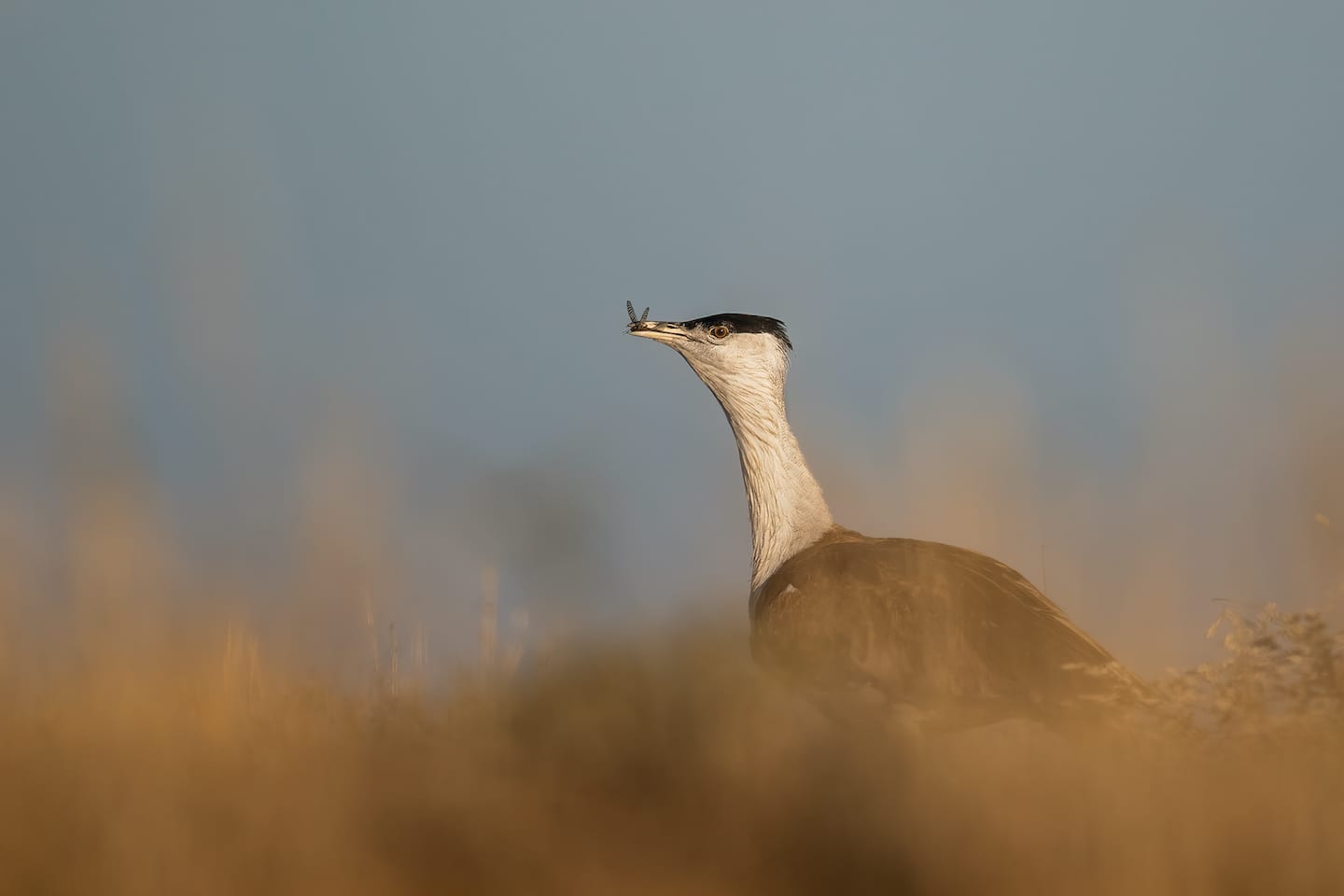 Many species of birds, from rosy starlings to raptors, prey on locusts. Large-scale spraying of chemical pesticides may poison them. (Top left) Greater hoopoe lark eating a locust. (Top right) The critically endangered great Indian bustard with a locust. (Above) A common kestrel eating a locust. Photos and video: Vipul Ramanuj

The dual lifestyles “evolved independently in different grasshopper subfamilies, meaning that there are many differences in mechanism once you begin looking underneath the surface,” says Stephen Rogers of the University of Cambridge, who conducted the serotonin study in desert locusts.

The researchers from the Chinese Academy didn’t stop with demonstrating the mechanism of the mobbing behaviour in migratory locusts. They went one step further to determine if the smell could be used against the insects. They set up sticky traps with 4VA as the bait and trapped the insects in both experimental and wild conditions.

Once scientists establish which pheromone acts as an open invitation in desert locusts, we may have an environmentally friendly solution to the next outbreak.

While a small model would fix my problem at home, I struggle to imagine the enormous dimensions of the sticky traps needed to catch billions of insects during an invasion. For now, I solved my grasshopper problem by shrouding my plants with mosquito netting.