Challenging normal logic, the glossy iridescence of jewel beetles is really a cloak of invisibility 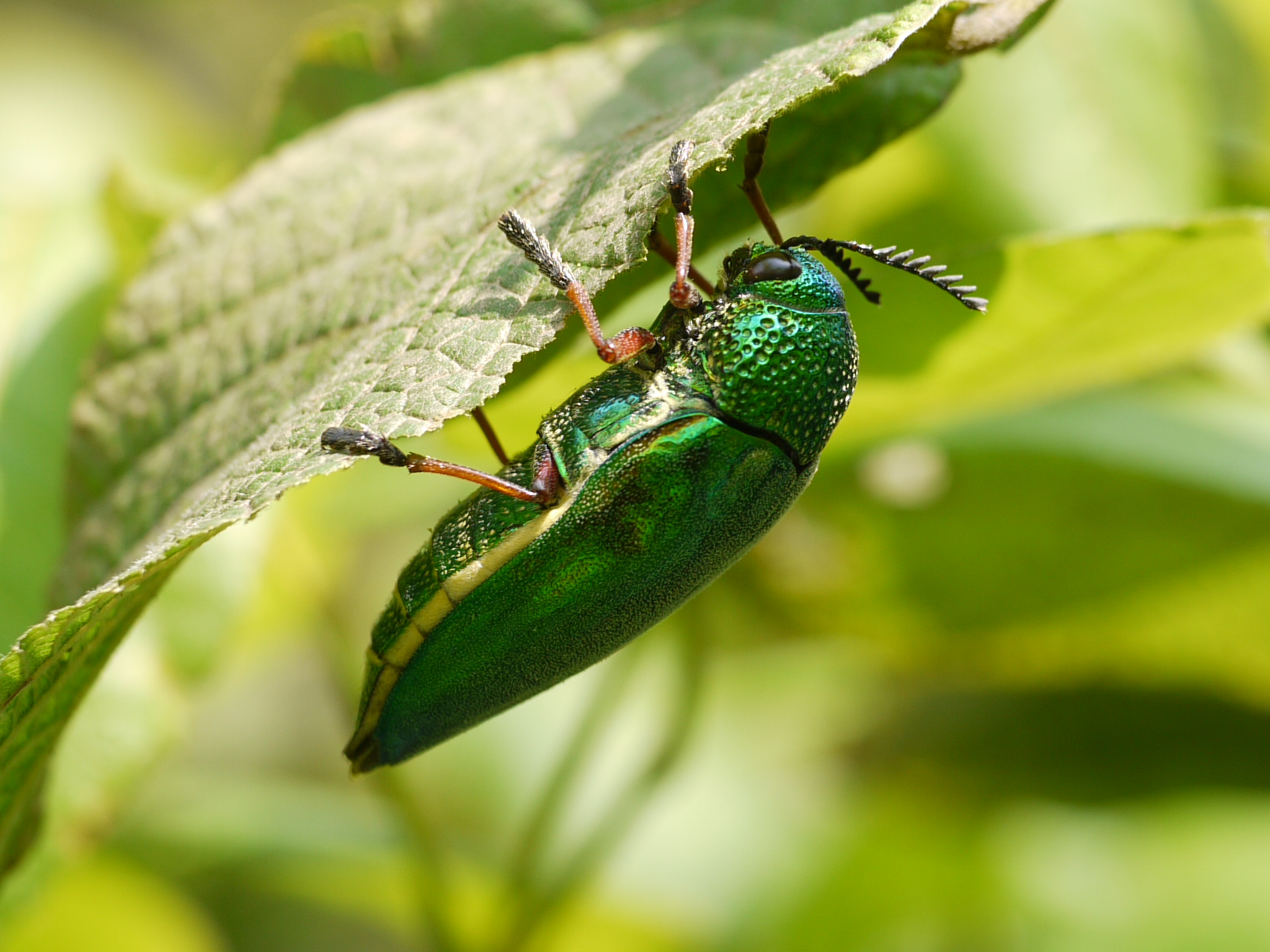 Among the extravagant textiles of the Mughal era on display at a museum, I saw one decorated with shiny iridescent pieces. Row upon row of these oblong objects, each about an inch in length, glittered like precious gemstones. They seemed familiar, as if I had seen them before. Then it came to me a flash. I had indeed seen these shimmering jewels, but they had been lying discarded among the leaf litter on the forest floor. They were the hard wing cases of a species of Asian jewel beetle (Sternocera aequisignata). I had examined one closely, turning it this way and that, and its brilliant colours changed swiftly from gold to sapphire, from amethyst to emerald. The hues remained intense long after the shell’s owner died. No wonder these insect wings were all the rage in preceding centuries as fabric adornments.

The jewel beetle doesn’t start life with its eye-catching party attire. It spends most of its life underground as a naked white grub, growing fat on tree roots. After it pupates, it emerges as an adult clothed in its resplendent blue-green-bronze wings as if touched by a fairy godmother.

When beetles lift off, they raise the outer pair of sturdy but lightweight wings, called elytra, out of the way and unfurl a pair of diaphanous membrane-thin ones for flight. On landing, they close the elytra over their delicate flying wings, like a foldable hangar under which to park their means of getting airborne. The wing shells may have spots, stripes, and colours, depending on the species.

Iridescence is a visual trick used by many species of beetles, including this one from the genus Chrysochroa. Photos: Hayath Mohammed Photographed in Raigarh, Maharashtra, this Asian jewel beetle’s iridescence takes insect beauty to the next level. Cover Photo: Dinesh Valke/Flickr CC

Typically, humans perceive colours when pigments absorb some wavelengths of light and reflect the rest. Iridescence, however, is a visual trick that relies on many layers of irregular nanostructures on the surface of the beetle’s elytra that scatter specific wavelengths of light in different directions. Light waves bouncing off the top layer combine or collide with ones glancing from the bottom, intensifying some colours, weakening others, and cancelling the rest. As the observing human or predator moves, changing their viewing angle, the elytra beams different wavelengths so the colours shift. These structural colours are more intense and highly reflective compared to pigment-produced hues.

Royals have their reasons for wearing sumptuous clothes, but what use are these eye-catching wing cases to beetles? Do they attract the opposite sex with their showy appendages as peacocks show off their tails? Since both sexes of jewel beetles are equally flamboyant, their hues are unlikely to be mate magnets. Instead, they could be a liability, attracting the unwanted attention of predators. Jewel beetles could be especially vulnerable as they feast on leaves out in the open during the day when their wings glisten in the sunlight. Perhaps that’s the point. If the insects were poisonous, their prismatic colours could be a signpost of danger, warning predators to leave them alone.

On the contrary, iridescence is “one of the prime factors of disguise, and quantities of creatures profit by it,” wrote Abbott Thayer more than a hundred years ago in a treatise on camouflage, Concealing-Coloration in the Animal Kingdom. The American artist, renowned for his paintings of angels and portraits of women, argued that all creatures used colours to conceal themselves and iridescence was no exception.

Critics ridiculed Thayer for going to extraordinary lengths to prove his theory. The most famous of his detractors was the American President and big game hunter, Theodore Roosevelt. As counterintuitive as Thayer’s theory was, scientists later discovered there’s truth to it.

Confident in its ability to hide in plain sight, the jewel beetle such as this Sternocera chrysis from West Bengal doesn’t appear to be worried about predators. Photo: Arijit Mondol

Researchers at the University of Bristol, UK, conducted an experiment, filling mealworms into nearly 900 iridescent beetle cases, and artificial replicas painted with different colours such as black, violet, blue, and green, and pinned them to leaves of various plants in a reserve. Two days later, they found many more shimmering ones survived intact than pigmented ones. Clearly, the unique light-reflecting property of iridescent shells played a protective role. But how? Was it through deterrence or camouflage? Do birds see the iridescence and stay clear of it? But the jewel beetle is neither toxic nor does it mimic a poisonous species with a rainbow-like array of colours. Or, as Thayer suggested, does the sheen make the insect invisible by confusing predators?

The researchers sent human volunteers into the woods to find the beetle wing cases. If iridescence were meant to be a warning, it ought to be obvious. But strangely, the volunteers had a hard time finding them. Instead of the classic camouflage method of matching the background, the shimmering colours disrupt perception to conceal the insect. Its changing colours and brightness visually tricks a moving predator. Confident in its ability to hide in plain sight, it doesn’t worry about being molested.

Gaping at the bejewelled royal garment on display, my mind ranged upon mundane practical issues that the insects don’t face. How did the wing cases last a wash cycle? Did the Mughal palace housekeepers launder these fabrics at all?

It’s ironic that humans turned the jewel beetle’s cloak of invisibility into a fashion statement.