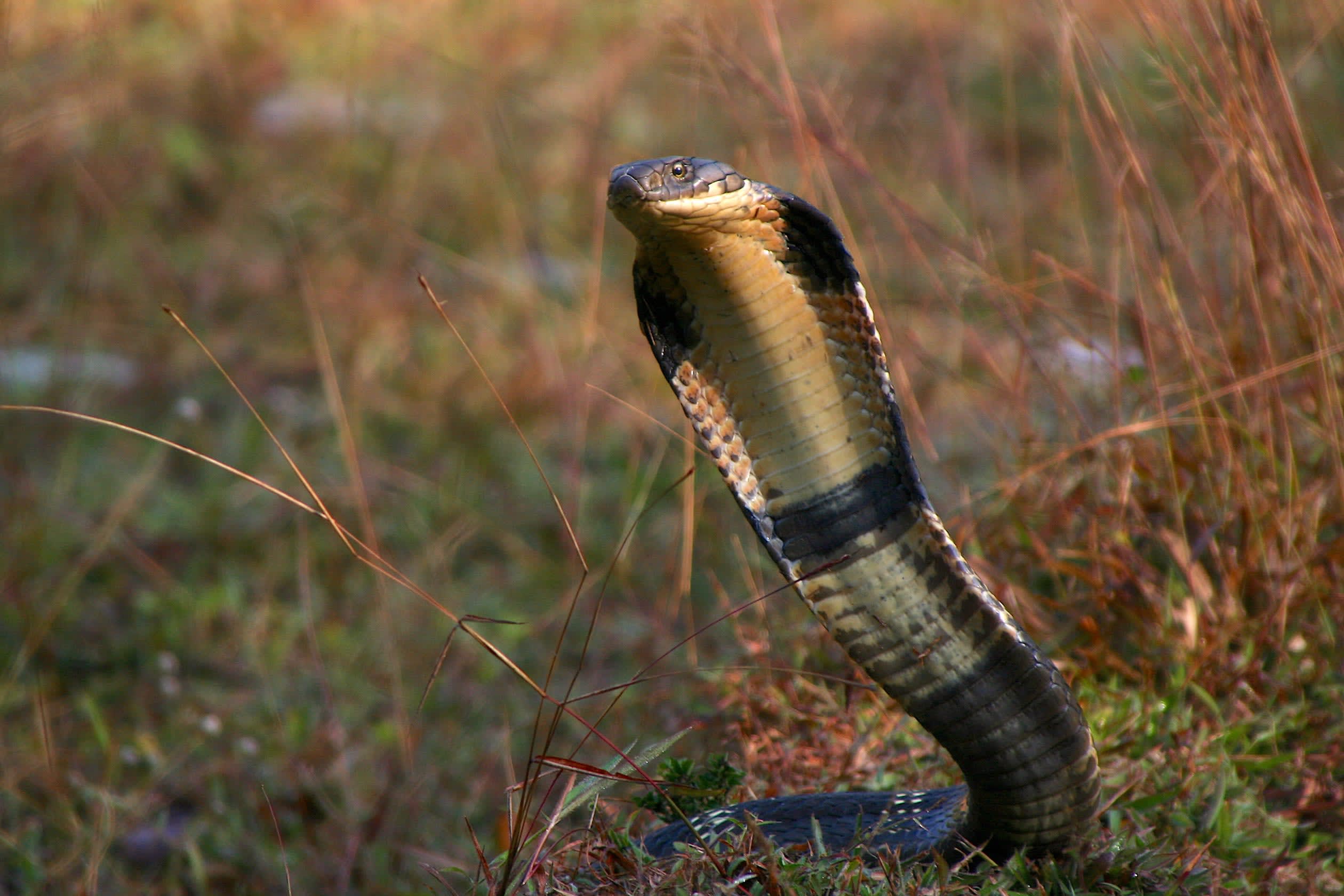 King cobras dine on snakes. Their specialised diet could pose an acute conundrum during the breeding season when males and females seek each other’s company. Since their primary prey, Indian rat snakes, resemble them to a degree, could they mistake their mates for a meal?

Vision is one way of differentiating their own from other species. When a male king cobra approaches a female, she spreads her hood and lowers her head away from her suitor, revealing the yellow chevron marking. No rat snake does that.

Once winter ends and temperatures rise, higher levels of testosterone drive male king cobras to forgo eating altogether to focus their energies on sex. The female’s coquettish behaviour and the male’s lack of appetite for food must protect these predators from each other.

In April 2008, villagers called the Agumbe Rainforest Research Station, Karnataka, to report that a pair of king cobras had taken up residence in their backyard. For four weeks, field assistants observed the pair emerge from a burrow every morning, bask, and retire inside by midday. Sometimes, the snakes mated in full view of their audience. Their devotion to each other was touching, since most other species go their separate ways soon after mating.

Then another 11-foot male king cobra showed up, and the two evenly sized males fought, twining their bodies while pushing and jostling with their heads and necks. During the ritualised wrestling, neither snake bit the other. The one that repeatedly slammed the other’s head down appeared to be the victor, and the defeated snake crawled away. Since the snakes were identical, no one could tell the newcomer from the steady partner.

A king cobra kills and eats a female of its own kind. Perhaps swallowing a gravid female is a way of destroying a rival’s progeny. Photo: Ajay Giri Cover: King cobras’ dietary preference for other snakes poses a risk during the breeding season. Cover photo courtesy: Agumbe Rainforest Research Station

The winner jabbed the coils of the nine-foot-long female in the snake version of foreplay, and she reciprocated with a sinuous feminine display. Despite a supposed lack of hunger and recognising the female by sight and scent, what the male did next shocked the observers.

He grabbed her by the throat, his enormous mouth choking her windpipe and pumping in venom. Her desperate struggles against his bulldog grip ripped her throat and blood spurted on the ground. She took a long time to die. When her body went completely limp, he started swallowing her. He worked his way down two-thirds of her body until he came to her belly bulging with eggs. Then inexplicably, he threw up and crawled away from the lifeless body.

The video made by the field assistants makes for tough viewing. Disturbed and appalled, my earlier affection for the species evaporated.

Researchers struggled to explain why the male killed the female. Although there’s no scientific proof, the field assistants thought the intruder was the victorious male. That surmise makes some sense of an unfathomable incident. Perhaps by April, when the mating season was almost over, the urgency to find a meal after the month or two of starvation was more powerful than the desire to mate. But hunger didn’t explain why the male threw up his meal and abandoned it. Or why he didn’t swallow the defeated male. Could this episode have been an aberration? 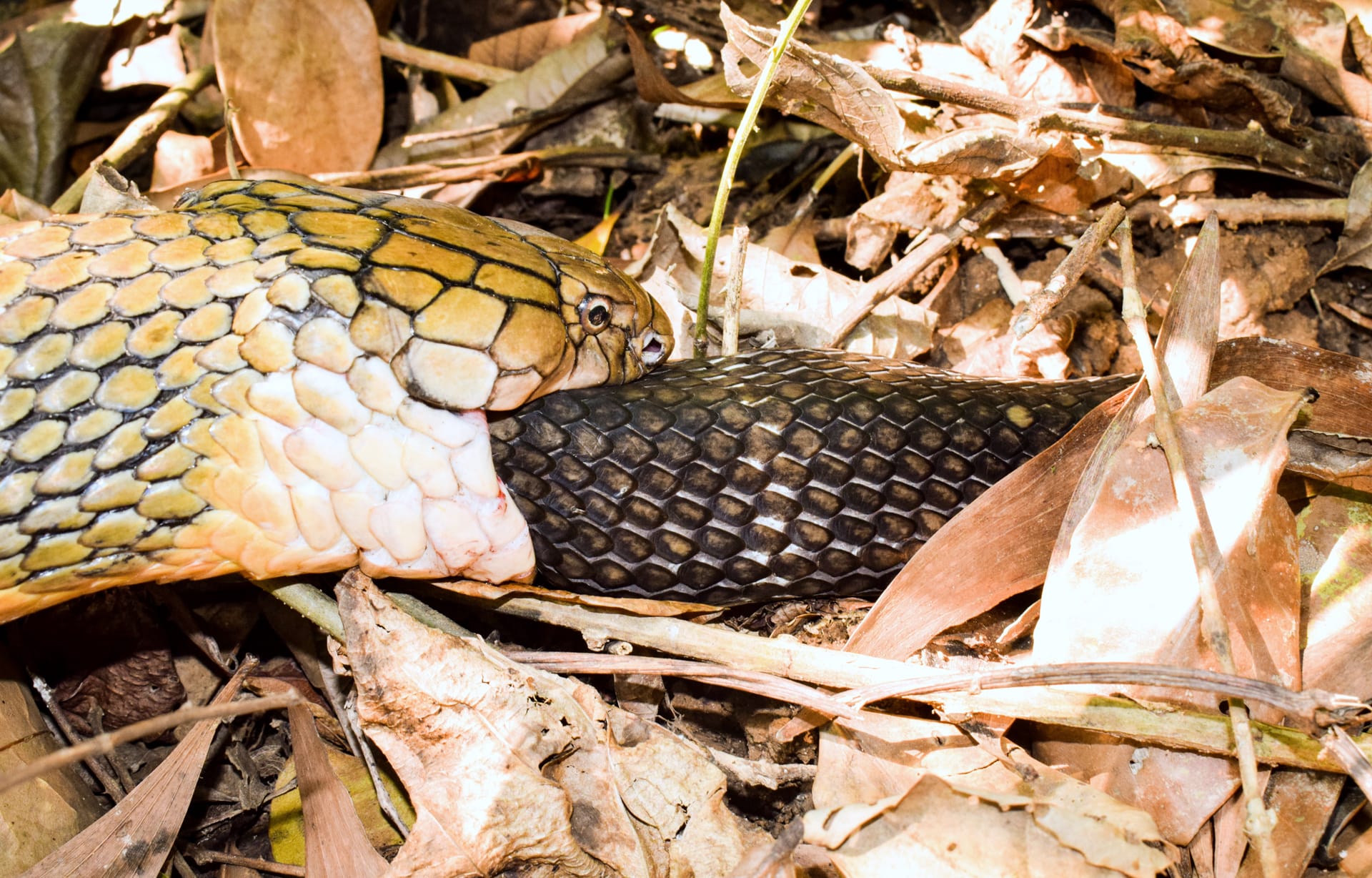 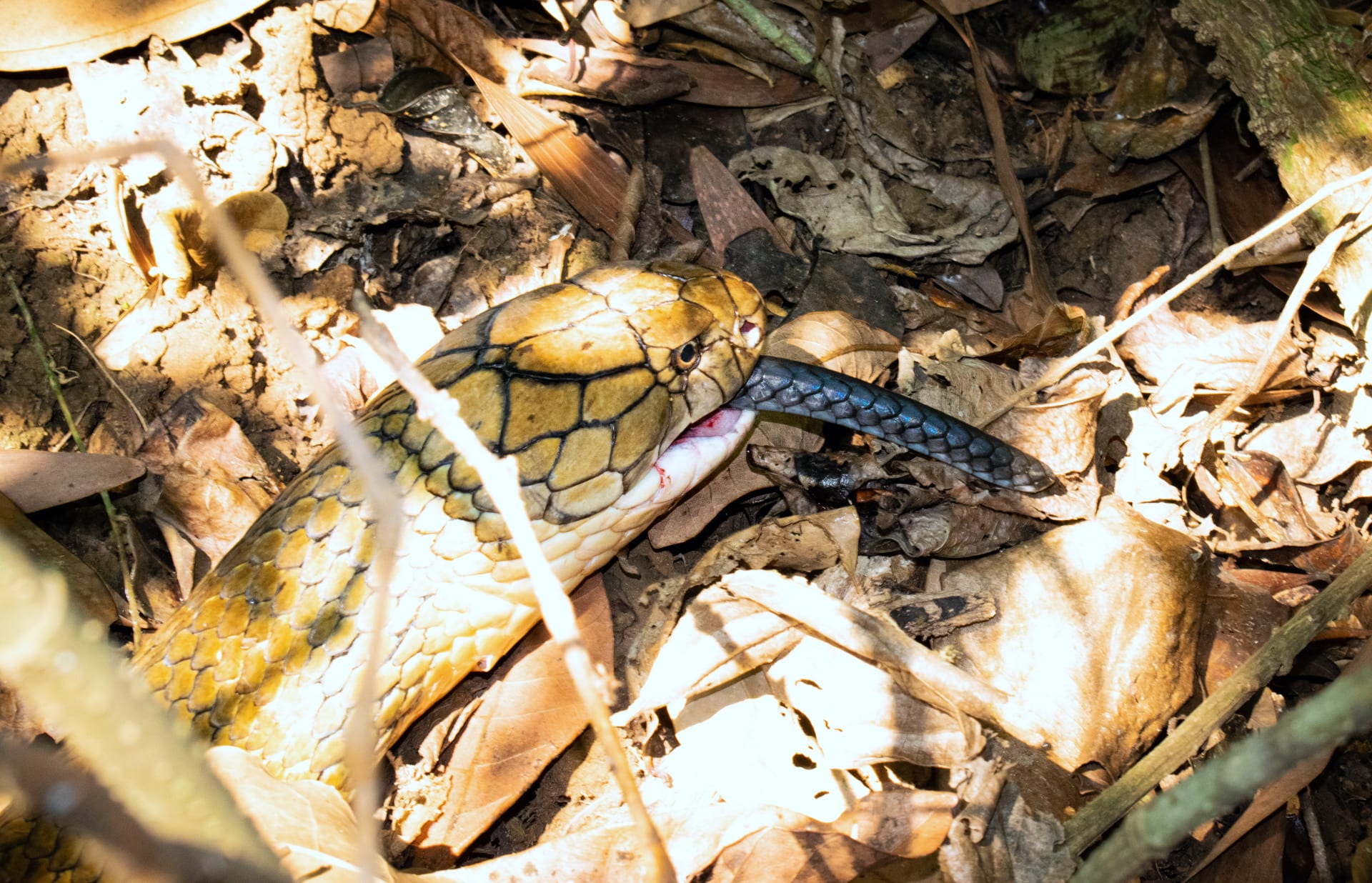 Many captive king cobras have swallowed their enclosure mates. Since their confinement may contribute to deviant behaviour, I didn’t examine those instances.

Then came another call and shock. Two male king cobras jostled for supremacy in a villager’s cowshed. These bouts usually end peaceably, and this instance ought to have been no different. But the combat turned lethal when the stronger male didn’t play by the rules, killing and swallowing his weaker rival.

The conundrum I thought king cobras might face was in my imagination. They appeared to know what they were doing. Researching cannibalism in snakes, I discovered that it is more common than we realise. More than 100 snake species turn on their own kind. Six cobra species in southern Africa are snake-eaters, and five of them are cannibals. The Cape cobra, for instance, is second only to the puff adder in abundance, and a hungry one is likely to come across others of its own species. In all recorded cases, the ones eating and being eaten were males. The South African researchers suggest this behaviour may be an offshoot of male combat. Swallowing a rival takes care of the competition once and for all.

In May 2017, a female king cobra heavy with eggs had toiled for three days to make a mound of leaves within which to lay her eggs. She was hours away from going into labour when a big male followed her scent trail to the scene. As he circled the leafy heap, the now alert female tried to make a break for it. She didn’t stand a chance. He swallowed her. The empty nest, a forlorn reminder of the sad saga, lay flattened in the monsoon downpour.

Many male mammals kill their rivals’ offspring, but they don’t go after the females. (See Faking It: Big Cats and the Confusion Around Paternity). The bereaved mothers go into heat, and their new partners father the next litter of young. A king cobra can lay about 30 eggs, and since it’s not an egg-eating species, consuming a rival’s embryos isn’t an option. Were the male to wait until the eggs hatched, he would have to hunt down every little hatchling. Perhaps swallowing the female herself, eggs and all, takes care of the problem. If male king cobras have it in for their rivals, why not just swallow their rivals instead? So far, researchers know of only one instance of a male king cobra consuming another in the wild.

King cobras take anomalous behaviour to an extreme. While the females are the only snakes to build a nest, the males appear to be the only ones to deliberately hunt down egg-laden females.

I asked Graham Alexander, of the University of the Witwatersrand, South Africa, and one of the researchers of the African cobra study, if he could explain what was going on with king cobras. “I think that it may be in the interests of a male to eat a female if there is little chance of him breeding with her,” he replied. “So, this could be because she is gravid or is unwilling to mate. In such a case, the male has little to lose and lots to gain by eating her.” He also suggests that cannibalism could possibly control the density of the population. “There is some special behaviour going on with king cobras. It’s all pretty interesting, but we do need more data.”

In April 2020, a male king cobra attacked a female and bit her neck repeatedly. The pair fought for three to four hours before they went their separate ways. When last seen, the female was fine and didn’t appear to be suffering from the male’s assaults. Why did this incident end so differently?

If explaining why males go after females is difficult, answering how this female escaped is even harder.