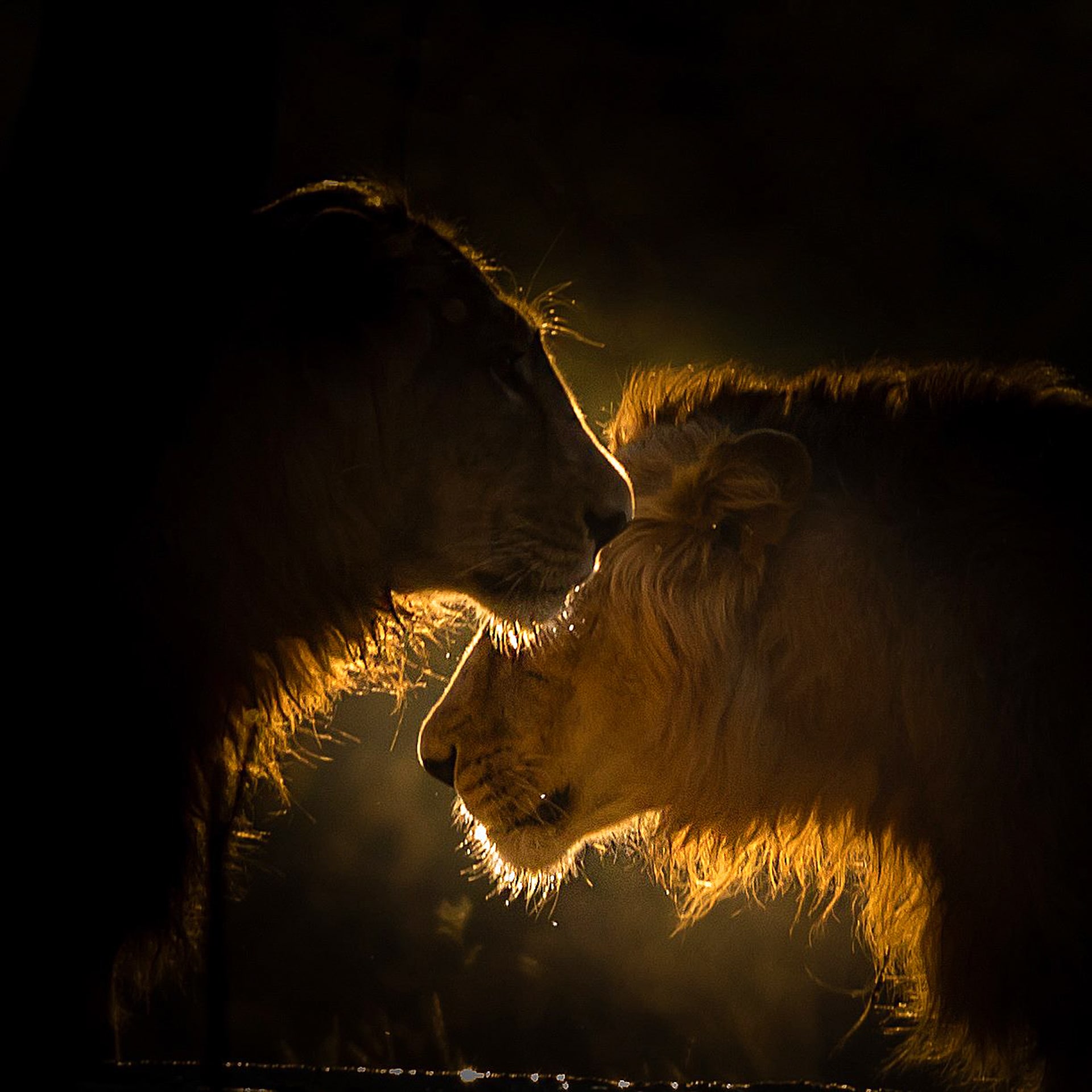 Partnership means everything in lion society. When young males are no longer welcome in their mothers’ prides, they are forced to seek their destiny elsewhere. But the world outside is no country for lone males. All habitable terrain is usually occupied by other bands of possessive lions, who don’t take trespassing strangers lightly. They may give chase, or worse, kill them. Since these bands or coalitions number two or more, single lions don’t stand a chance against them.

If newly independent males were to ally with others like themselves, their invincibility quotient goes up. They can wrest control of a territory from its existing owners, prevail in confrontations with challengers, and bring down prey. Only then do they become eligible bachelors. Forming such masculine relationships is crucial to their survival.

I thought two similar-sized lions lounging under a thorn tree in Gir were brothers by blood. Although the shade cast on the ground could have accommodated six or seven of them, these animals lay against each other. One rolled over and licked the mane-framed face of the other, which nuzzled up to its companion. All this affection had to come from sharing a lifelong bond. When they stood up, I could see they were in good condition with no bones showing. Theirs was a successful partnership.

For an alliance to thrive, the spoils, whether food or sex, must be shared. Among African lions in the vast plains of the Serengeti and Ngorongoro, Tanzania, every member of a coalition gains equal opportunity. For every litter that’s born, its parents have to mate as many as 1,000 times, and all the lionesses in a pride come on heat simultaneously. If a male has to copulate with every female that many times to impregnate her, it’s physically impossible for the alpha male to prevent randy males of his coalition from mating with the other fertile females of a pride. With many lionesses in heat, lions of a band get almost equal opportunity to mate. The same principle applies to dining too. They prey on large-bodied herbivores, such as 500-kilogram Cape buffalo and 250-kilogram zebra, so there’s plenty of meat to go around.

In the woodlands of Gir, India, however, this plays out differently. The common prey, spotted deer, averaging 45 kilograms, is a mere morsel. Access to mates is also limited. Female prides are small in number, and Asian lionesses don’t synchronise their reproductive receptiveness. Unlike their African relatives, Asian lions don’t enjoy plentitude. This changes the dynamics of power within a male coalition with the dominant one monopolising carcasses and mates.

At a kill, the alpha lion eats first, hogging the soft parts and flesh, while the subordinates are left to chew on hide and bone. When consorting with female prides, the dominant one gets most of the breeding rights.

Why would the subordinates invest energy in bringing down prey or risk their lives in chasing away rivals, when only one among them gains all the perks? I wondered if it was because a solitary life is so prone to failure that even leftovers are better than nothing. Could it be that even if they don’t produce sons and daughters, they gain indirectly by supporting their sibling’s cubs and perpetuating the familial line?

I wasn’t entirely correct. Brothers rarely form coalitions, says Stotra Chakrabarti, a Postdoctoral Research Associate at the University of Minnesota, US, and his colleagues. Most Asian lions ally with unrelated strangers because the chances of a blood brother reaching adulthood at the same time were slim. A litter may have one to four cubs of roughly even sex ratio. Up to 45 per cent die before they reach their first birthday. More lose their lives before they turn three, the age of independence. If the probability of two brothers reaching adulthood is low, the likelihood of more than two siblings or cousins surviving to maturity is only seven per cent. Young lions more often find themselves alone. So they seek others of the same age in a similar predicament.

This makes the unequal sharing of food and opportunities to procreate even more puzzling. Why do lions in the lower levels of a hierarchy, who aren’t related by birth to the dominant one, tolerate this raw deal? The answer is that they don’t have a better alternative. Feeding on scraps and mating with females when the alpha male isn’t looking are good enough payoffs to make the partnership worthwhile. 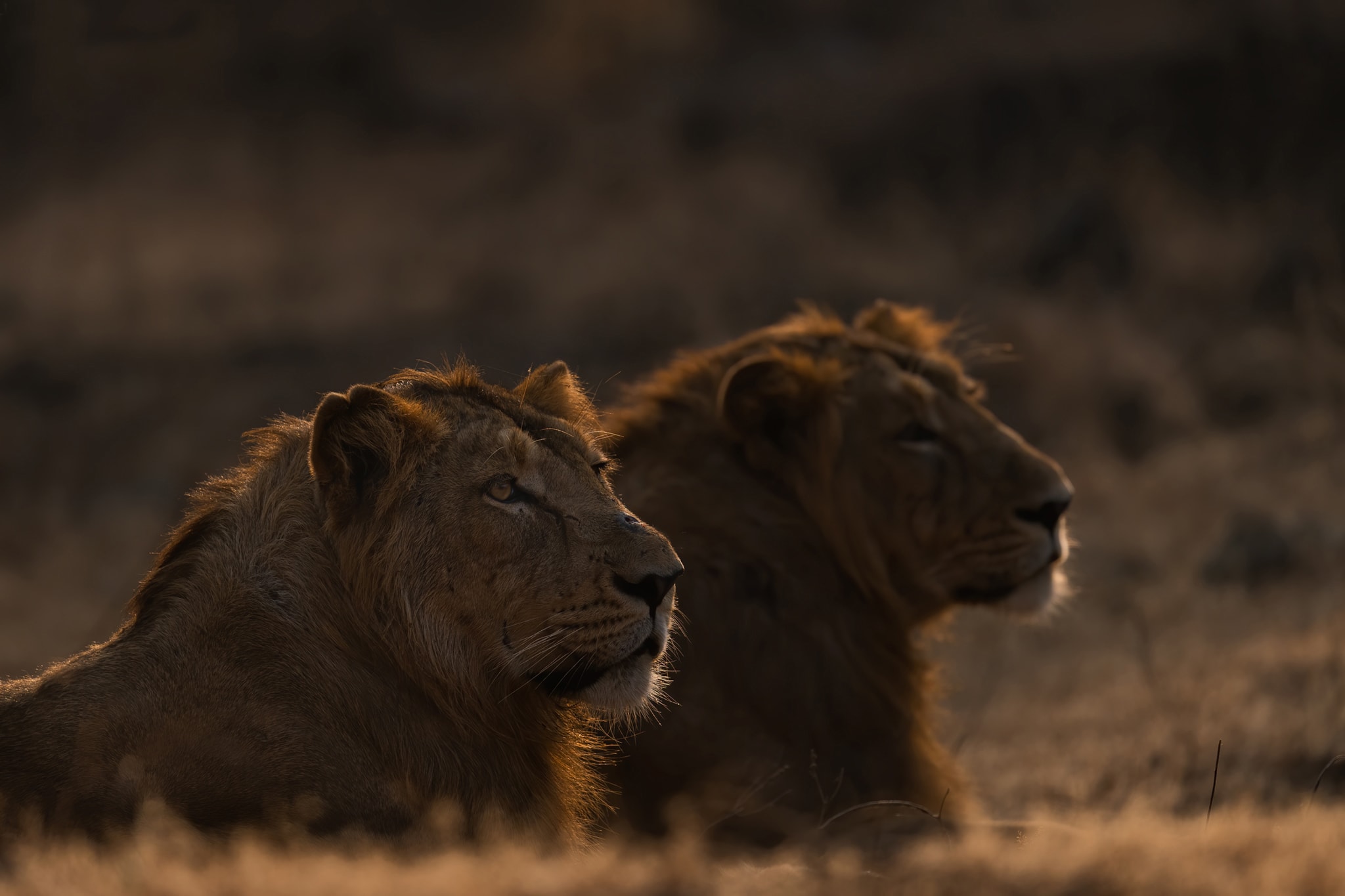 Most coalitions comprise two lions of the same age who are unrelated. They don’t divide eating and breeding opportunities equally, and the dominant one takes more than his fair share. Photo: Vipul Ramanuj

After analysing the genetics and genealogical records, the researchers say the large bands of Gir are made of brothers, cousins, or half-siblings. Since they are related, the subordinates settle for the short end of the stick and support their brother. Forgoing mating opportunities is a severe evolutionary cost,” says Chakrabarti, “unless in doing so you help related individuals. Consequently, large male lion coalitions are feasible only when all partners are brothers or cousins.”

On the other hand, for unrelated lions, being part of such large gangs brings diminishing returns. Weighing the advantages and drawbacks, the ideal partnership size for them is two. Another reason for the rarity of larger bands is the size of prey. Spotted deer don’t have enough meat on them to fill the bellies of too many lions.

Many cubs die before their first birthday, and more lose their lives before they turn three, the age of independence. Young male survivors usually find themselves alone. Photo: Vipul Ramanuj

When I recall the two lions revelling in each other’s company, I’m intrigued by how their relationship had begun. As strangers, had they been hesitant and nervous at first? How had they decided to become buddies? How had they tested if they were compatible while simultaneously determining who would be dominant? The study of lions in Gir is the longest ongoing ecological research project in India and answers to the above questions may be forthcoming in the years to come.