Brooding over the Black-Necked Crane

My very first encounter with the black-necked crane was in June 1999, at the Lunparma marshes near Chushul in Ladakh. I was with forest official Mohammed Abbas at the time, and I still remember him remarking about how lucky I was to see the bird on my first visit. In Ladakhi culture, sighting a black-necked crane is considered a sign of good luck.

The black-necked crane Grus nigricollis is the only alpine species, among 15 species of cranes in the world. It is presently found in the high-altitude regions of India, China, and Bhutan, but due to the difficult terrain, inhospitable climate and inaccessibility of its habitat, the black-necked crane was the last of the world’s crane species to be discovered. It was first described by the Russian naturalist Nikolai M. Przhevalsky, at Lake Koko-Nor in the Qinghai Province of China, in North-Eastern Tibet in 1876.

The black-necked crane arrives in Ladakh around end-March or early April to breed. Photo: Surya Ramachandran Tso Kar, a saltwater lake in Ladakh at an altitude of 4,582 m, is a known breeding ground for the black-necked crane. In fact, the Tso Kar basin is where the cranes were first discovered in India in 1919. Photo: Shivang Mehta

Changing with the seasons

Black-necked cranes are migratory birds, and accordingly, their breeding habitat is totally different from their non-breeding or wintering habitat. They breed at high-altitude wetlands and riverine marshes ranging from 3,000 to 5,000 m above mean sea level. The main breeding range of the species encompasses the Qinghai-Tibetan Plateau in south central China, and adjacent parts of India; mainly the Changthang region of Ladakh. Frequent breeding attempts have also been reported from north Sikkim.

During non-breeding time, especially the harsh winter months, black-necked cranes gather at comparatively lower altitudes in China, Bhutan, and India. The wintering range of the species lies on the southern and eastern parts of Qinghai-Tibetan Plateau and on the Yunnan-Guizhou Plateau of China. A sizable population of about 600 birds spends the winter in Bhutan. Few birds regularly visit Pangchen and Sangti valleys of Arunachal Pradesh during the winter months.

The author used a specially-designed birdwatching hide to study the black-necked crane. This allowed him to observe the cranes from a single spot over long periods without disturbing or alarming them. Photo courtesy: WWF-India

I studied the breeding biology of the black-necked cranes in Ladakh for a period of eight years, and earned my doctorate degree in wildlife sciences. At this time, I used a hide for photography so as not to disturb the birds. I would enter the hide at 3 am in the morning and observe the birds until late in the evening. Through this experience, I collected vital facts related to the food habits and behaviour of the species. On many instances, I saw birds chasing away even big animals such as yaks and horses of nomads, when they tried to graze near their nesting sites.

The breeding habitat of black-necked cranes can be broadly classified into two categories: riverine marshes and lacustrine marshes (relating to lakes). In India, the high-altitude wetlands of eastern Ladakh are the main breeding grounds of this species. The birds arrive during the months of March and April, complete their breeding cycle, and leave these wetlands for their wintering grounds by October-November.

Black-necked cranes have an elaborate courtship period with spectacular displays, dances, and collaborative nest building, followed by mating. Their dances have become a part of folklore, and feature in songs, celebrations, and paintings in Buddhist culture. Photo: Surya Ramachandran

All About the Chicks

These cranes are extremely territorial during the breeding season, and spend most of their time foraging with their chicks in the wetlands or nearby grasslands. Both males and females contribute almost equally, and parents always remain vigilant, especially during incubation and chick rearing. This alert behaviour is part of their survival strategy.

On one occasion, during a field survey, we saw a pair of cranes moving towards us. Thinking it was a good opportunity to click some pictures, we moved towards them, but within a few seconds, the ferocious pair chased us away. We could not click any pictures, as it was clear that the cranes were moving towards us in an attacking posture.

Such behaviour is quite common while they are with their chicks, as predators often attack them. On one occasion, a golden eagle was seen killing a juvenile black-necked crane in Ladakh. On another, a wolf attacked a nesting pair and then ate the chick.

The birds’ are comparatively less alert during the non-breeding season, when cranes spend most of their time in groups, foraging in fields where rice and potato were previously grown and are then stored. They roost together at night in small ponds to ensure safety from predators.

In breeding areas, large numbers of free-ranging dogs pose a serious threat to the breeding population of black-necked cranes as they eat the eggs and chicks. In response to this risk, a resolution was passed by conservation experts on the species, urging range countries (where the bird is found) to take steps to control the population of feral dogs. This resolution was presented at the regional meeting on black-necked cranes, held at Gansu, China in July 2019.

Overgrazing by livestock owned by nomads, unplanned and unregulated development, and tourism activities are other major threats to the species. Linear infrastructure, especially massive networks of power lines and plantations inside high-altitude wetlands, are other causes for concern. At a regional level, climatic change with extreme climatic events and rapid glacial melt in some areas is also a serious threat to the future survival of the species.

The total current population of black-necked cranes is about 13,500 birds. This estimate is based on data presented at the black-necked crane conservation meeting in Gansu, which was attended by experts from India, China, and Bhutan. Currently, India has a breeding population of less than 100 birds, which includes 15 breeding pairs. About 600 wintering birds have been recorded in Bhutan and about 2-3 pairs of cranes visit Arunachal Pradesh during winter. Around 95 per cent of the crane’s population is found in China. 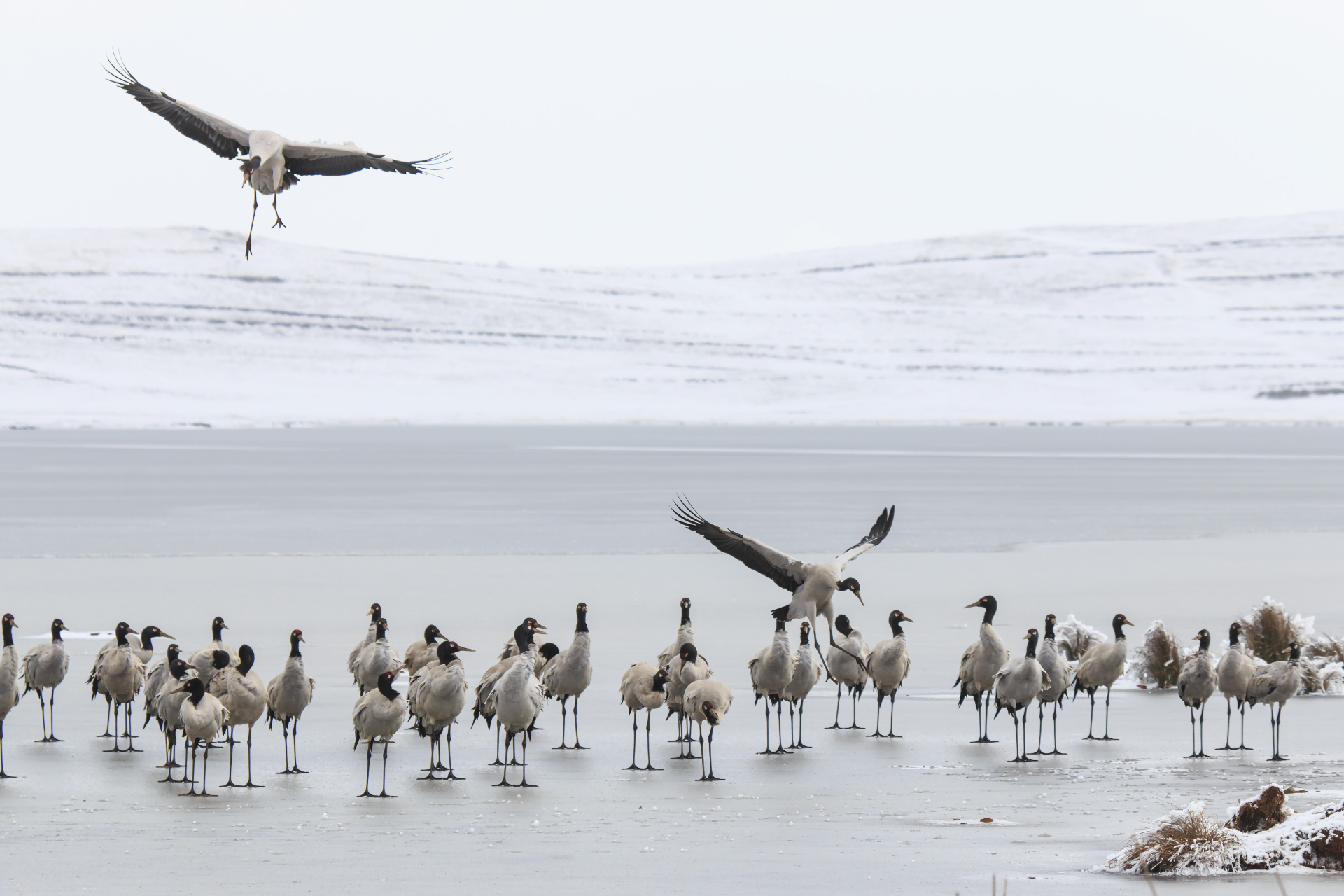 In order to protect the species in specific range countries, conservation reserves have been created. A black-necked crane network has been formed, which regularly designs science-based conservation strategies for the species. Over two decades of work in this field — and with support from WWF-India — I have also designed and implemented many conservation actions for this species in the field.

WWF-India in collaboration with the state forest departments is actively engaged with a wide range of stakeholders for the protection of species in Jammu & Kashmir, Sikkim, and Arunachal Pradesh. Regular education and awareness campaigns are organised to ensure involvement of schoolchildren, and a regional workshop was held in Delhi in 2011, in which black-necked crane experts from India, China and Bhutan participated. This was a collaborative effort between WWF-India, MoEFCC (Ministry of Environment, Forest, and Climate Change), and BNHS (Bombay Natural History Society).

Simultaneously, regular and uninterrupted data on the status of the species is collected and maintained. Currently, my dream is to use this bird as a powerful vehicle for regional level scientific collaboration between India, China and Bhutan.

Conservation Status
• On Schedule I of Wildlife Protection Act, 1972.
• State Bird of Jammu and Kashmir
• Listed it as endangered by Chinese, in class ‘A’, accorded highest protection
• “Vulnerable” on IUCN Red List
• Listed in the Appendix 1 of CMS (Convention on Migratory Species)
• Appendix 1 of CITES (Convention on International Trade in Endangered Species of Wild Fauna and Flora). 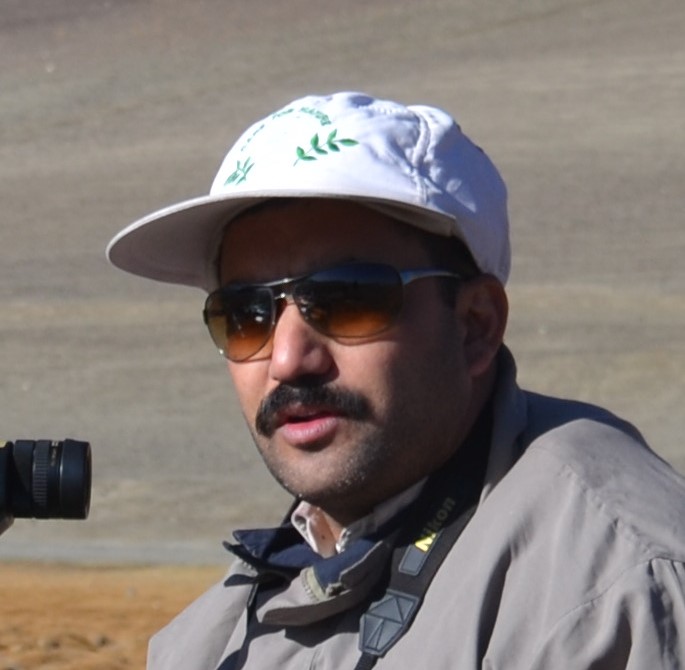 is a wildlife biologist and a expert on Himalayan ecology and wildlife. He has a special interest in mountain waters and mountain-related conservation issues.