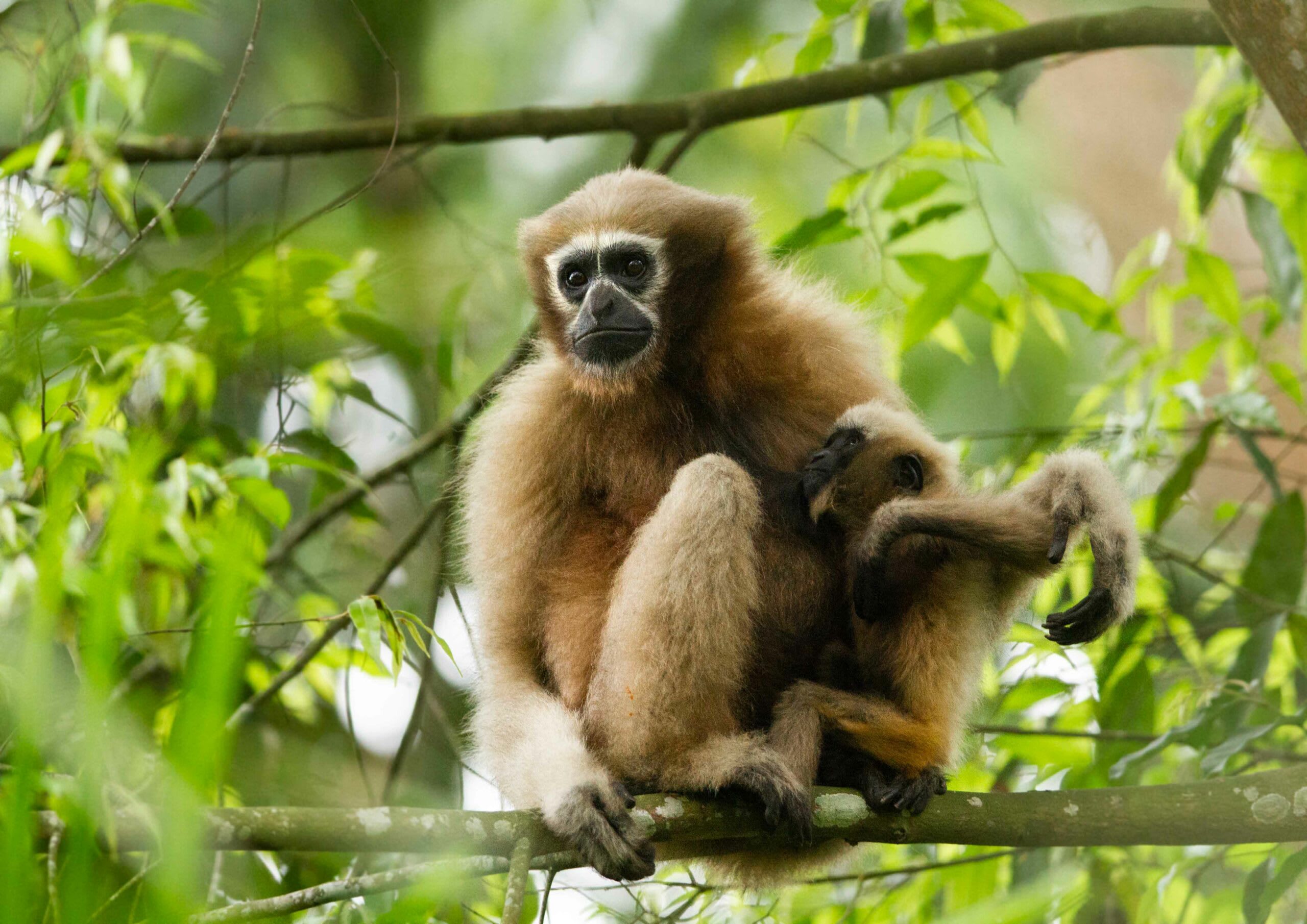 A lone hoolock gibbon jumps from one tree branch to another before taking a big final leap across the railway tracks that fragment its forested home into two unequal compartments.

This is good news, a leap of hope for the western hoolock gibbons (Hoolock hoolock) of Hoollongapar Gibbon Sanctuary in India’s northeastern state of Assam.

Hoolock gibbons, India’s only ape species, are strictly arboreal animals, which means they’re reluctant to spend time on the ground — and which makes the scar carved out of the forest by the railway line just as impassable as a canyon.

The railroad dates back to the British colonial era and slices the sanctuary into two chunks: one roughly 150 hectares (370 acres), the rest roughly 1,950 hectares (4,820 acres). Three family groups of gibbons live in the smaller area, isolated from the 23 families in the larger one, according to a census conducted in 2006.

That the gibbons have finally started crossing the tracks is the fruit of a 15-year effort to build a natural canopy bridge by planting trees along the railway line.

The effort dates back to a 2004-2006 conservation plan proposed by regional wildlife NGO Aaranyak, in collaboration with the forest department in the district of Jorhat, where the sanctuary is located, and with support from the U.S. Fish and Wildlife Service’s Great Ape Conservation Fund. From 2006 onward, with cooperation from the local community and the forest department, Aaranyak oversaw the planting of 3,000 saplings alongside the tracks, representing 71 species of plants known to provide food or habitat for gibbons.

The railway line cutting through the Hoollongapar Gibbon Sanctuary in Assam. Photo: bijitdutta.com/Shutterstock
Cover Photo: A hoolock gibbon photographed in Assam. As its habitat shrinks, due largely to the expansion of agriculture in India and Myanmar, the western hoolock gibbon’s population has declined by more than 90% in 40 years, with just 3,000 estimated to survive in the wild. Cover Photo: Anuradha Marwah/Shutterstock

“Over the years, the trees grew and a natural canopy bridge has finally formed over the railway track,” says Dilip Chetry, head of Aaranyak’s primate research and conservation division.

The first few crossings through this canopy bridge were finally recorded in 2019, says Heramba Bhuyan, a forest guard at the Hoollongapar Gibbon Sanctuary. “The pace has definitely increased this year,” he says, proudly showing a neat, well-maintained record book, “Multiple crossings of Gibbon have been witnessed since January this year.”

“Crossings of single male gibbons have been witnessed from the smaller to the larger compartment and vice versa,” Chetry adds.

Even these first few forays across the track were significant: Since gibbons are monogamous and do not mate within family lines, the stranded families in the smaller area were struggling to breed, leading to dwindling numbers. They were also suffering due to depleting food resources in their patch of forest that’s less than half the size of New York City’s Central Park.

“This year, in April 2021, a whole family of gibbons comprising four individuals have crossed over from the smaller to the larger compartment, which is a real good news,” Chetry says. “Also, various other species like the capped langur [Trachypithecus pileatus], rhesus macaque [Macaca mulatta] and squirrels are now using the natural canopy bridge to cross over the railway track.”

The success in reconnecting these two portions of forest has inspired conservationists to double down on their efforts. “We plan to continue with the plantation further and help in the formation of more such natural canopy bridges for the easy passage of gibbons and also other species,” Chetry says.

Growing trees so close to the tracks does have its issues. In many cases, railway workers have cut down trees or saplings to keep the tracks and its surroundings clear for the passage of trains.

But forest guard Bhuyan says the forest department is invested in making the canopy system work, and the railway department, too, is catching up.

“Sometimes after thunderstorms, we have to come and check even at night if the trees close to the track have got uprooted, blocking the railway track,” Bhuyan says. “The railway department too has to face such difficulties sometimes, but we try to help each other. All said and done, we all are emotional about the gibbon.”