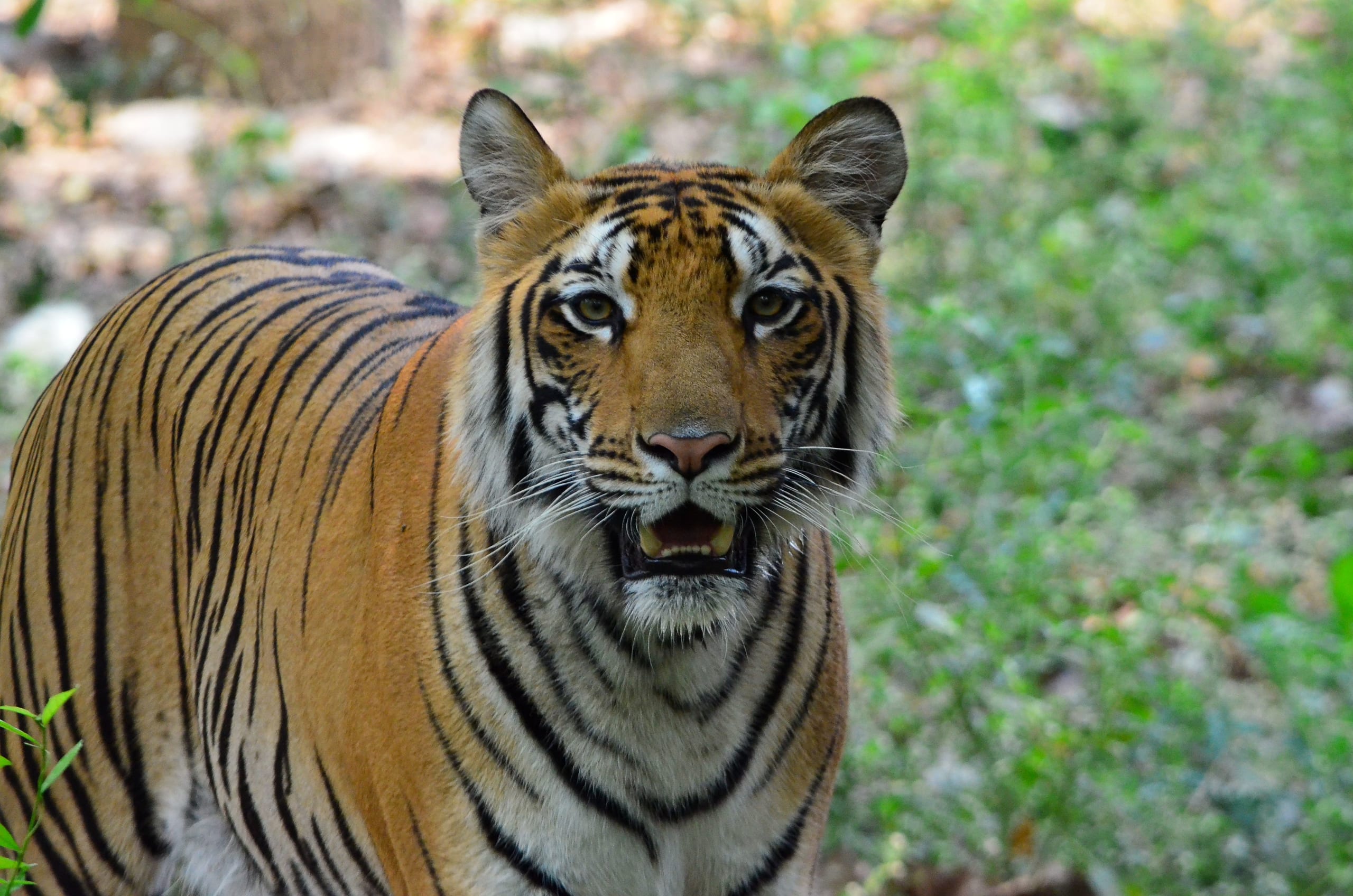 Former Chhattisgarh chief minister Raman Singh had cleared the proposal for notifying the Bhoramdeo Wildlife Sanctuary as a tiger reserve in 2017 following a recommendation of India’s National Tiger Conservation Authority (NTCA) as it was argued that it forms a critical part of the tiger habitat in the central Indian landscape.

Subsequently, in 2019, wildlife activist Nitin Singhvi filed public interest litigation in the Chhattisgarh High Court which states that non-compliance with the NTCA’s recommendation is illegal as it is mandatory under the provisions of the Wildlife Protection Act of 1972 for the state to comply with the tiger authority to declare any area as a tiger reserve.

But the idea was dropped in 2018. One of the reasons that was reportedly behind shelving the decision is that the local population living in and around the sanctuary area mainly has Baiga tribals who are not interested in relocating elsewhere. As a result, the government is also not keen on displacing them ultimately resulting in the government ignoring the NTCA’s request.

Currently, it has three tiger reserves – Indravati National Park and Tiger Reserve, Achanakmar, and Udanti Sitanadi. In the Indravati Tiger Reserve, in Bijapur district in the state’s southern part, the presence of Maoists is a big issue.

“Conviction is almost zero in tiger poaching cases. Mostly poor tribal people are blamed for the killings. In Indravati, there are many hunting cases too, but the real picture in these areas never comes to the fore,” said Bhopal-based wildlife expert Ajay Dubey. Under such circumstances, the notification of Bhoramdeo as a tiger reserve can help save the situation, he notes, but the state government seems to be dragging its feet over that.

Of India’s 50 tiger reserves, three are in Chhattisgarh. Photo: Special arrangement
Cover: The number of tigers in Chhattisgarh has decreased in the past few years. Cover photo: Joydeep 87, CC BY-SA 4.0

But the present state government led by chief minister Bhupesh Baghel has decided on notifying Guru Ghasidas National Park located in Korea district as the fourth tiger reserve in the state.

However, an official of the NTCA said that both these places should be notified as tiger reserves.

Compared to that, Madhya Pradesh has six tiger reserves with 526 tigers and is a top wildlife destination for national and international tourists.

According to the NTCA official, there is a significant tiger movement from Kanha National Park to Bhoramdeo, and thus the latter should be notified as a reserve. He said the Baiga community can be made conservation partners which can benefit both the tribal people as well as wildlife.

Experts have long argued that for the tiger population in the country to survive, tiger corridors are vital to allow their free movement and reduce conflict situations. India right now has 2,967 tigers and of that 1,033 are in the central Indian landscape alone.

“We have to consider both issues separately. Notifying Guru Ghasidas as a tiger reserve is no concrete reason to stop the notification of Bhoramdeo. There should be more and more space for big cats, especially tigers, and the government must notify Bhoramdeo. It is vital to protect forests and save tiger habitats as India has lost many tigers. Chhattisgarh must go ahead with Bhoramdeo,” Dubey told Mongabay-India.

Guru Ghasidas is part of an important corridor stretching from Bandhavgarh National Park in Madhya Pradesh to the Palamau Tiger Reserve in Jharkhand. According to Dubey, central India is an important landscape for tigers and connectivity of natural corridors must be maintained at all costs for tiger gene flow. “I have been following the Guru Ghasidas matter since 2012 and went to the high court in 2018 to demand its notification. I wanted to know why the matter was on hold,” Dubey added.

Singhvi said that the previous Raman Singh government had proposed in the state wildlife board meeting that Bhoramdeo should be declared a tiger reserve but later dropped the idea due to a political issue. “At this stage, I approached the high court demanding that the NTCA recommendation is mandatory,” he pointed out.

He explained that the Pench Tiger Reserve, which partly lies in Maharashtra and partly in Madhya Pradesh, is connected to Kanha. Tigers can move from Pench to come to Kanha and then visit Bhoramdeo. From there, the animals can even go to Guru Ghasidas and Sanjay-Dubri Tiger Reserve in Sidhi district of Madhya Pradesh if they move northwards. If they move southwards, tigers can go to Navegaon-Nagzira and Tadoba-Andhari tiger reserves in Maharashtra. So, this is one of the biggest corridors in the tiger landscape.

“On seeing the map, one will understand the importance of Bhoramdeo. It connects Indravati in the south of Chhattisgarh. In the north, it connects Sanjay-Dubri and Guru Ghasidas. From Bhoramdeo, tigers can visit Sanjay-Dubri, Achnakmarg, Ghasidas and Indravati, and even Kanha and Pench,” Singhvi said.

The NTCA explained that once the idea of Bhoramdeo was dropped, the state government decided on Ghasidas.

S.P. Yadav, who is the member-secretary of the NTCA, said the matter will be considered once a detailed proposal comes from the Chhattisgarh government.

“Bhoramdeo can be notified as a tiger reserve only if the state is willing. The complete onus lies with the Chhattisgarh government, and if they are not willing, we cannot help it. We have already advised them on Guru Ghasidas as a tiger reserve but so far we have not received any intimation. Guru Ghasidas has immense corridor value and it is a welcome step. Bhoramdeo can also be a good tiger habitat,” Yadav told Mongabay-India.

“We went for Guru Ghasidas as it was also in the loop. The idea is that till we get the consent of villagers for Bhoramdeo, let us move ahead with Guru Ghasidas. Most people think that whenever a protected area is declared a tiger reserve, they will be displaced. But it is not the scenario until they choose to voluntarily move,” Samuel explained.

The population of Baigas’ in Bhoramdeo’s region stands at about 50,000 and inside the existing wildlife sanctuary area there are 39 villages while there are about 250 are outside in the fringe region.

Aniruddh Das Panaria, a resident of Chilphi village located inside the Bhoramdeo sanctuary area, said a lot of protests took place during the previous state government. “Local residents refused to shift leaving their villages, sat in protest, carried out demonstrations against Bhoramdeo sanctuary being declared a tiger reserve.”

“About 28 villages were under the shadow of displacement. Most people have agricultural lands and cultivate small millets like maize, millets like kodo and kutki, jowar and paddy. It is a Baiga-dominated area, but other communities also live in this area.”

Lilabai Surkar, head of the village council in Anjana village, admitted of massive protests across the district against the tiger reserve’s notification decision. She said people were concerned about shifting to a new place once displaced as their present area is full of forests and besides farming; locals collect non-timber forest produce such as lac, sal leaves, mahua flowers and tendu for livelihood.

Similarly, Rajendra Chhure, the head of Barbaspur gram panchayat (inside the sanctuary), told Mongabay-India said: “Most people in this area practise cultivation” and questioned that “wow can they just relocate leaving their behind homes and lands?”

“No one wants to shift and there has been no dialogue regarding the rehabilitation package,” Chhure added. His village Nandini is located adjacent to Kanha and comes under the Chilphi range.

The Chilphi range adjoining Kanha has been kept in the buffer area and so there are no issues of relocation. There are villages even in the fringe areas of the Kanha Tiger Reserve, Samuel explained. “Nobody wants to displace the villagers,” she added.

However, there is a danger of villagers restarting protests if the government moves to declare the Bhoramdeo wildlife sanctuary as a tiger reserve.

“If the government tries to evict us, we will start the protest once again. If they declare it as a reserve, they will surely displace us in the future. We have taken birth here and want to stay here,” said Deen Dayal Parte, the head of the council of the Seoni Kala village.

Singhvi’s PIL is listed for hearing in the Chhattisgarh High Court in the next 2-3 months. Till now, six hearings have taken place with the last hearing in February 2020.