Going to the Dogs? Turning the Page for India’s Endangered Dhole

As efficient carnivores built to thrive at the top of the food chain, the Asiatic wild dog is a pack hunter that can bring down prey many times its size. Unfortunately, it also has a long history of targeted persecution in India 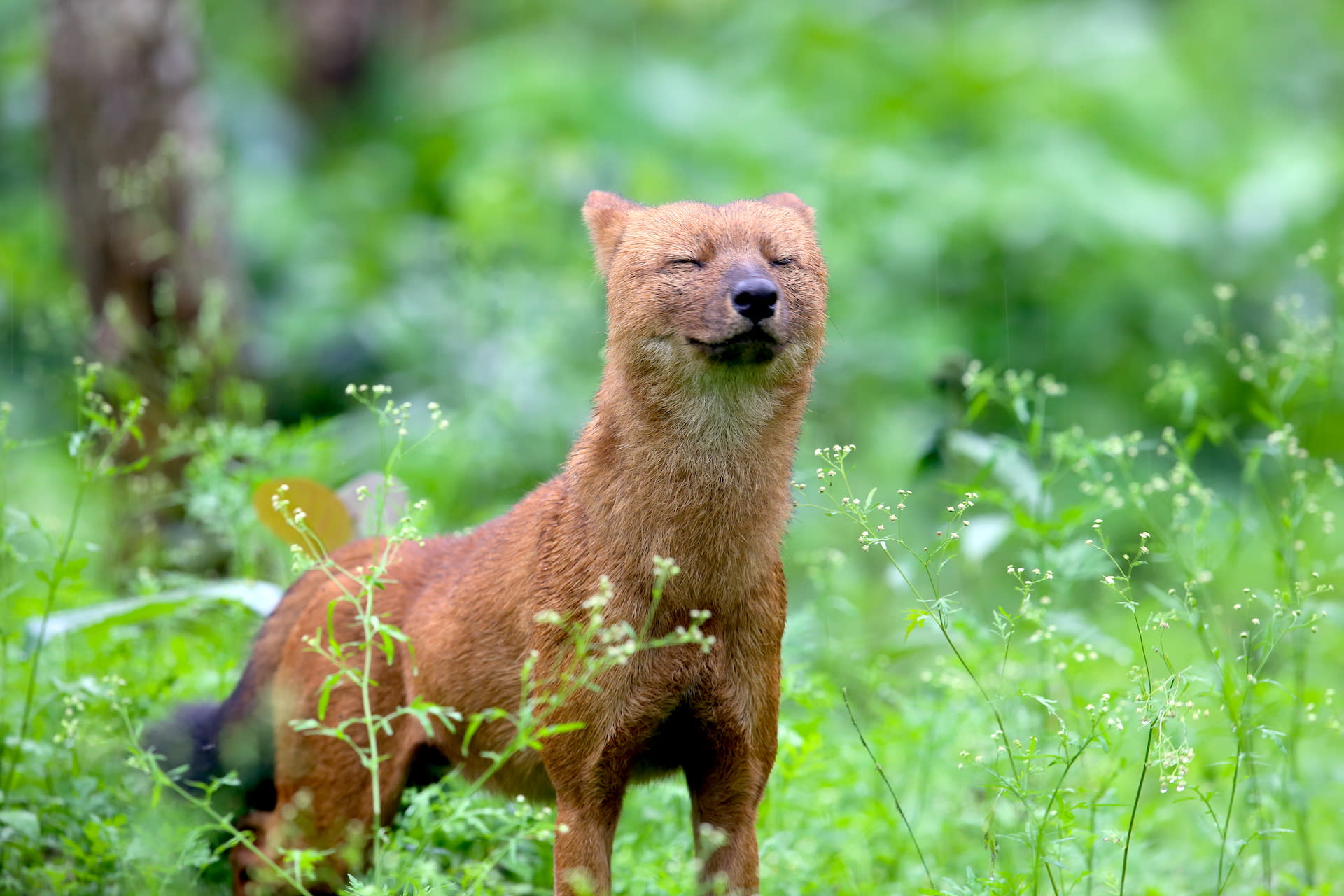 It was a hot summer morning, nearly a decade ago. I was walking through the resplendent forests of Karnataka’s Western Ghats. A cacophony of insect noises ebbed and flowed amidst the tall teak trees, and the forest stood shrouded in a cloak of discomforting humidity. I was part of a two-member team conducting transect surveys of large herbivores. Somewhere midway through the transect, a rust-coloured creature came running towards us. Before I could fully register it, I was staring at a dhole (Cuon alpinus) in the eye, standing around eight metres away. We saw it run to another dhole that stood waiting a little distance away. I am unaware of the communication this dhole had with its pack-mate, but it then came back at us, and this time even closer. Another loud growl erupted while we stood our ground. Then it then ran back to its pack-mate and both of them disappeared into the thicket on our right. Soon after, one more dog followed, and then another one, both giving us a passing glance before we lost sight of them.

Extremely fond of water, dholes are excellent swimmers and build their dens close to waterbodies. These pack hunters (seen here in Satpura) are known to even leave a kill while feeding to get a drink of water. Photo: Surya Ramachandran Cover Photo: The dhole is a shy, endangered canid found in across central, south, east, and southeast Asia. It is also sometimes referred to as the Asiatic wild dog, Indian wild dog, or red dog. Cover Photo: Surya Ramachandran

This was my first encounter with the enigmatic carnivore while on foot. Contrary to the perception that dholes are bloodthirsty, ruthless killers of the Indian jungle, they are actually rather docile. A dhole will generally avoid people, often slinking away into the bushes at the first sign of human presence. Also called the Asiatic wild dog, the dhole is a fascinating species native to the forests of South and Southeast Asia. They live in packs of 2-25 individuals, hunt large prey animals like the sambar and chital, whistle to communicate with each other, and in most regions, share space with other large carnivores like tigers and leopards.

Despite their interesting habits and charismatic appeal, dholes have long suffered from a terrible reputation. Throughout India’s colonial history, British hunters who pursued sport hunting viewed the dhole as a problem species — for them the “red dog” was not a prized trophy, nor was it fit to be a “game” species valued for meat or fur. These sportsmen often witnessed packs of dholes hunt down and devour deer, pig, and gaur, disembowelling and eating their prey alive. A prevailing belief was that dholes would eat up all the animals in a forest, leaving nothing in store for the leisurely hunts of Englishmen and other Indian royalty. For a significant part of the last 200 years, dholes were thus vilified, labelled “vermin”, and bounty hunted indiscriminately, as it evident from the following quote:
“Except for his handsome appearance, the wild dog has not a single redeeming feature, and no effort, fair or foul, should be spared to destroy these pests of the jungle”.
– G. Phythian-Adams, Nilgiri Game Association, 1949. 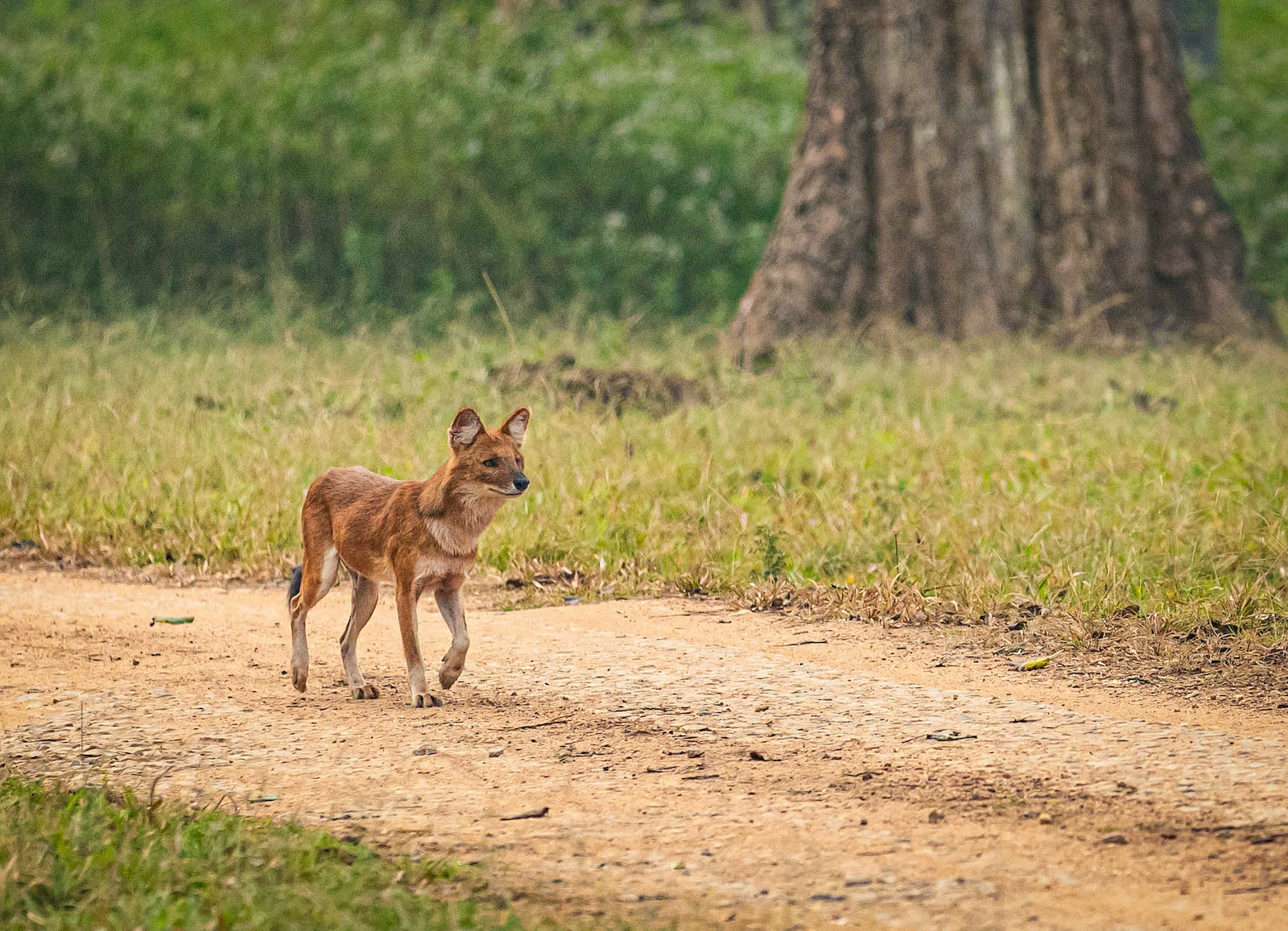 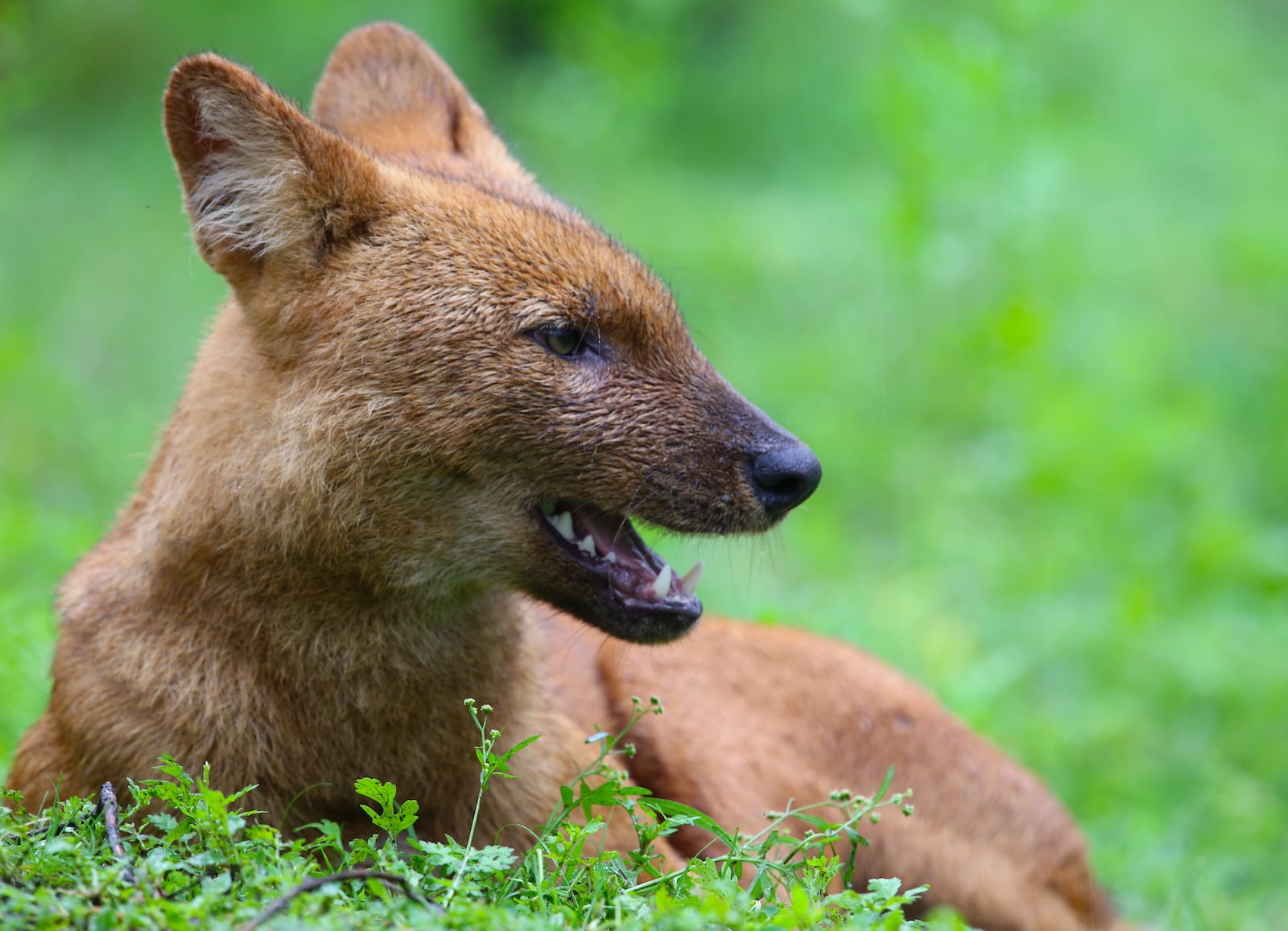 What could have shaped the perception that dholes are pests of the jungle? Do they really overhunt and empty the forests? The misconceptions may be attributed to a couple of factors. First, dholes often hunt prey animals that are nearly ten times their size. The dogs neither have the jaw strength to deliver a killing bite, nor the physical strength to fully subdue their prey; their only option is to start eating while the quarry is still alive — which makes for a rather ghastly sight. Second, unlike their feline competitors (tigers and leopards), dholes have to hunt a lot more frequently, because every meal is shared with the whole pack. Third, since dholes are mostly active during the day, people were likely to witness the dogs hunting more often than they would see the nocturnal large cats.

All these aspects also add to making the dholes’ kill success rate extremely high. I remember watching one such event in Bandipur Tiger Reserve a few years ago. A pack of eight dholes pursued, killed, and ate up an adult chital doe in front of our camp. The meek ungulate was reduced to bones in a matter of fifteen minutes.

Adult dholes like this alpha male will regurgitate food to feed their young. The pups begin to accompany the pack on hunts when they are about six months old. Photo: Dhritiman Mukherjee

It would seem like these whistling hunters are the epitome of efficiency, built to thrive at the top of the food chain. But dholes have very specific ecological requirements that makes their persistence somewhat difficult. They are extremely habitat sensitive; viable populations need expansive forest cover with adequate densities of large prey animals. Areas like coffee and tea plantations sometimes serve as secondary habitats. But such agroforest production areas, particularly when interspersed with a forest mosaic, can only support smaller populations and facilitate movement of dispersing individuals. Importantly, dholes actively avoid areas with human disturbance, especially where there are forest grazing cattle. This checklist of requirements, coupled with a long history of targeted persecution by people, makes the dhole a globally threatened species.

The IUCN places them under the “Endangered” category, suggesting a range-wide population estimate of 4,500–10,000 dholes, of which 1,000–2,000 are adult, mature individuals capable of reproducing. India is an important country for the species, purportedly with the largest population of dholes, mostly in the Western Ghats, the Central Indian landscape, and Northeast India’s forests. Yet, dholes have disappeared from nearly 60 per cent of their former range in the country just in the past 100 years.

Ungulates like sambar comprise a major part of the dhole’s diet. Dholes may bite chunks of flesh and tear apart their prey even before it is dead. This pack of 23 dholes was hunting a female sambar in Satpura National Park. Part of the pack split up and killed the calf as well. Video: Surya Ramachandran

Today, dholes continue to face a host of threats and challenges that compromise their future in India. Protected areas like national parks and wildlife sanctuaries, which serve as safe havens for dhole populations, cover just about 5 per cent of the country. Most unprotected forests, and sometimes even protected reserves, are extremely vulnerable to clearance and diversion for commercial purposes. Large infrastructure projects almost routinely circumvent eco-legal barriers and end up degrading or fragmenting dhole habitats. In some parts of Northeast India, dholes suffer from retaliatory killing because they prey on domestic livestock. Dholes are also at risk of potentially contracting lethal and non-lethal diseases through interactions with India’s exploding stray dog populations.

Moving forward there needs to be greater scientific focus on the species, and a conservation monitoring system to periodically track dhole numbers. Recent research points to the importance of states like Kerala, Karnataka, Goa, Maharashtra, Madhya Pradesh, Chhattisgarh, and Arunachal Pradesh in sustaining dhole populations. India would benefit from a country-level dhole conservation plan, tailored to fit regional contexts, threats and ground realties. Following recent successes in conserving species like tigers, leopards, rhinos, and elephants, here’s hoping that the next decade garners more public and government support towards our wild dogs. I am optimistic that conserving dholes will be the next feather in the cap of India’s conservation legacy.

is a wildlife biologist who works on the ecology of large carnivores in India. He earned a PhD from the University of Florida and is a Research Associate with Wildlife Conservation Society-India.