The Chhattisgarh state government is trying to feed its surplus paddy to elephants in the hope that it will prevent them from coming into villages in search of food. Experts weigh in on the wisdom of this strategy 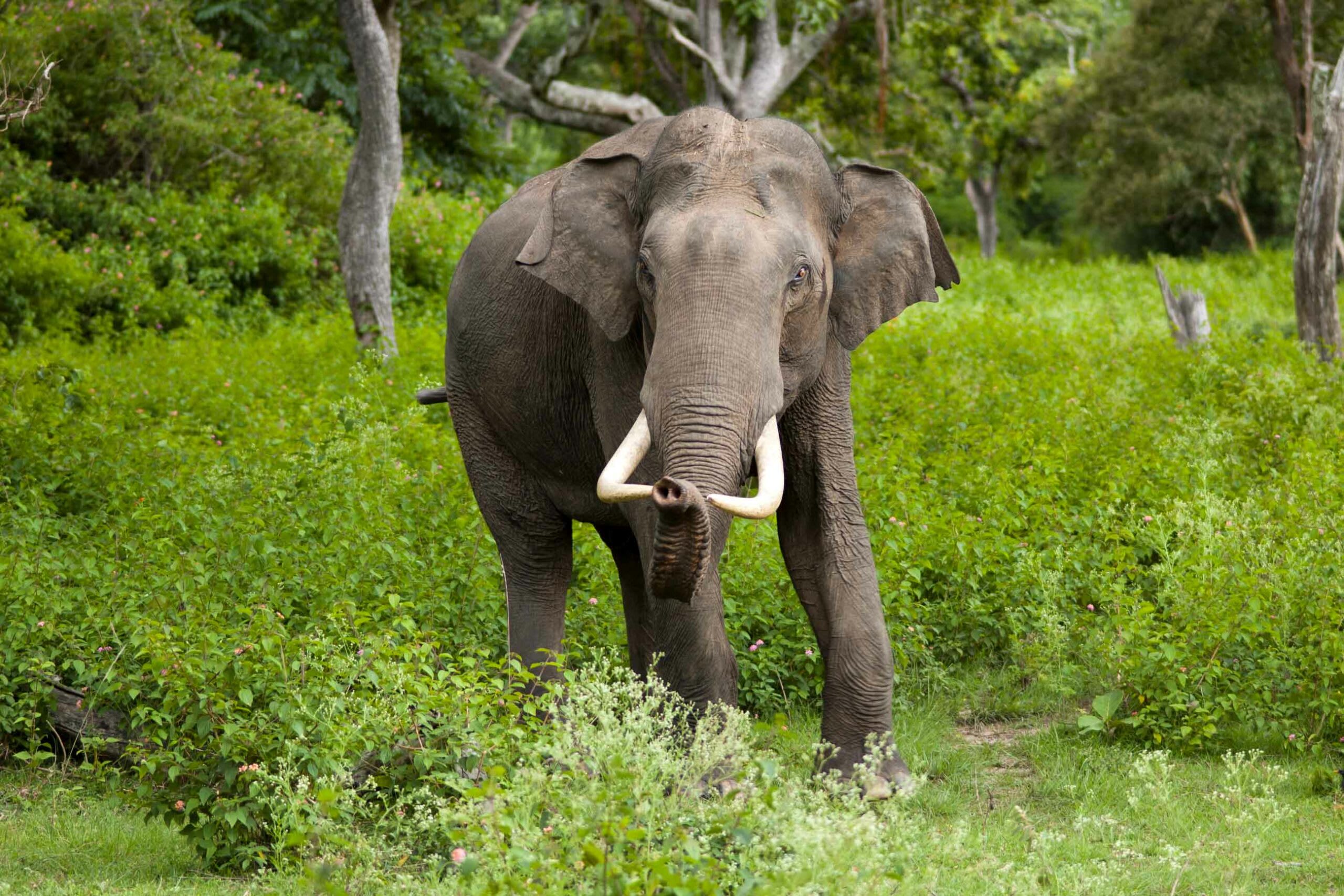 A group of wild elephants raided the village of the Kandaraja Panchayat last month, demolishing several houses in their wake. Among those whose homes were damaged, was Loknath Yadav, of Barpara, Mainpat in Surguja district. The rains that followed, have added to his woes. Yadav realises the irony of elephants damaging houses in search of food, at a time when the forest department has made food easily accessible to elephants, to reduce such conflict.

The forest department had kept sacks full of paddy in the open in the forests near Dandkesara, Kesara and other villages of the same Mainpat area, for the elephants to feed on. The elephant herd, however, bypassed the paddy sacks in Uranga, Patrapara of Mainpat, and entered the Kandaraja village. In search of food, the elephants demolished five houses.

After similar incidents have come to light, people have started to doubt the state government’s plans to prevent human-animal conflict by feeding excess paddy to the elephants.

Due to an abundance of paddy in the state, the Chhattisgarh government has been looking for ways to put the excess crop to good use. Earlier, the government had announced plans to make ethanol from the rice, but that plan is yet to be executed. Now the government has decided to use the paddy, purchased at support price, to feed wild elephants which it hopes will prevent them from coming into villages in search of food.

The state government claims that the forest department had earlier too experimented with feeding paddy to wild tuskers. In some areas, it proved to be successful and thus they decided to expand the areas where this plan would be implemented.

Surplus quantity of paddy
In 2017-18 when BJP government was at the helm, the state government had procured 56.88 lakh metric tonnes of paddy from 12.06 lakh farmers. After coming to power in the state in 2018, the Congress government increased the minimum support price (MSP) of paddy at Rs. 2500 per quintal. It led to a record procurement of paddy.

According to the information provided by the state Food Minister Amarjit Bhagat in the Vidhan Sabha on July 28 this year, the state government had leftover paddy from an earlier purchase even as they procured more. In the Vidhan Sabha response, Bhagat estimates that 64.56 lakh tonnes procured in 2020-21 were sent for custom milling, 17.09 lakh tonnes are yet to be consumed, 14.79 lakh tonnes are still lying in the paddy collection centres and another 2.33 lakh tonnes are still lying in the cooperative committees. Additionally, in many areas after rains, the paddy started sprouting and rotting. Some amount of paddy is, however, still unaccounted for in the response.

Two years ago the state government had announced that it will make ethanol from leftover paddy but the plan has not been executed due to differences between the state and central government on the purchase of rice. Now, things have reached a point where it has become necessary for the state government to find an avenue where the procured excess paddy can be disposed of.

Feeding paddy to elephants
After various measures implemented to dispose of the excess paddy proved futile, with lakhs of tonnes of paddy left in the hands of the state government, the government decided to feed the paddy to wild elephants living in the forests of Chattisgarh.

Due to rampant coal mining in Chattisgarh, elephants living in the Surguja and Bilaspur forest circles have now migrated to different areas all across the state. In the last elephant census conducted in May 2017, 398 elephants were found in the state. There were 212 elephants in Surguja circle, 121 in Bilaspur circle, 42 in Raipur circle and 23 in Durg forest circle. It is estimated that the population of elephants would have crossed 500 by now.

A house attacked by elephants. In the last three years, 204 people and 45 elephants have died in the human-elephant conflict in the state. Photo: Alok Prakash Putul

According to the state’s Principal Chief Conservator of Forests P.V. Narasimha Rao, the forest department has decided to keep bags of paddy in forest areas. It is being done to prevent human-elephant conflict. These bags will be kept at a distance from the villages, to keep elephants from entering human settlements.

Amid the reports of feeding paddy to wild tuskers, the State Forest Minister Mohammad Akbar held a press conference saying that the department had kept sacks of paddy in 11 beats of the forest areas of the state, out of which elephants had started eating the paddy in 3 beats. He called the experiment a success.

“After analysing the incidents where elephants demolished the houses in the villages, we saw that elephants mostly knocked down the rooms where the villagers stored grains. When they will find food in the forest itself, there will be no need for them to enter the village and vandalise houses,” said Akbar.

State Food Minister Bhagat also says that the forest department has demanded poor quality paddy for the elephants. This effort, to provide food to the elephants, may reduce the chances of the elephants coming to the villages in search of food.

But Bharatiya Janata Party (BJP), the opposition in the state, is raising many questions regarding this plan of the government. Opposition leader in the Legislative Assembly, a senior member of BJP, Dharamlal Kaushik alleges that the state government is buying sprouted and rotten paddy at the rate of about Rs. 2100 per quintal, in the name of elephants, whereas in the open market the same paddy was auctioned for at Rs. 1,400.

“What is the need to buy poor-quality paddy to feed elephants at more than Rs. 2,000 per quintal? The state government is trying to set the record straight after indulging in corruption in procuring paddy. They have come up with this scheme to cover their tracks,” alleged Kaushik, while talking to Mongabay-India.

Experts doubtful about the success of the experiment
Elephant experts are raising questions about the decision of the forest department to feed paddy to elephants.

Former Chief Conservator of Forests of Chhattisgarh K.K. Bisen says that in 2018, the forest department had tried to feed the elephants inside the forest and had kept some sacks of paddy but the elephants did not show any interest.

Wildlife expert Mitu Gupta stressed on the importance of extensive study before indulging in any such experiment. She says one can learn from experiments done in India and abroad to prevent human-elephant conflict, keeping in mind the important steps and precautions before going ahead with such experiments.

Talking to Mongabay-India, she said that while there were incidents of elephants eating paddy and the softer parts of the crop, it is doubtful that they will keep out of the village after finding sacks full of paddy.

“Apart from elephants, other animals may also come to eat the paddy. This can lead to other ecological problems, which can only be speculated,” she says.

Raman Sukumar who was associated with Project Elephant, started in India in 1992, has been researching and studying elephants for the last 40 years. Sukumar, who is counted among the world’s top elephant experts, expressed many apprehensions about the decision of the Chhattisgarh government.

He said, “The government is wrong to think that it will be able to prevent human-animal conflict with this experiment. If we make paddy available for the elephants, it will acquire the taste for it and will stop eating its natural food in the forest. This is called positive reinforcement in science.”

“Once you start feeding the elephants, they wait for food at the same places. They will develop a habit. How long can the forest department keep feeding them? This is not a solution to the problem at hand. On the contrary, if someday they will not find food at the same places, they will become more aggressive and break into the village and vandalise houses in search of grains, as we have gotten them hooked to grains. They will not return to the forests then. Their population will also gradually increase and if this happens, you can imagine the magnitude of the havoc,” said Sukumar.

Sukumar suggests that the Chhattisgarh government, along with neighboring states, should make a long-term plan with experts to prevent human-elephant conflict.