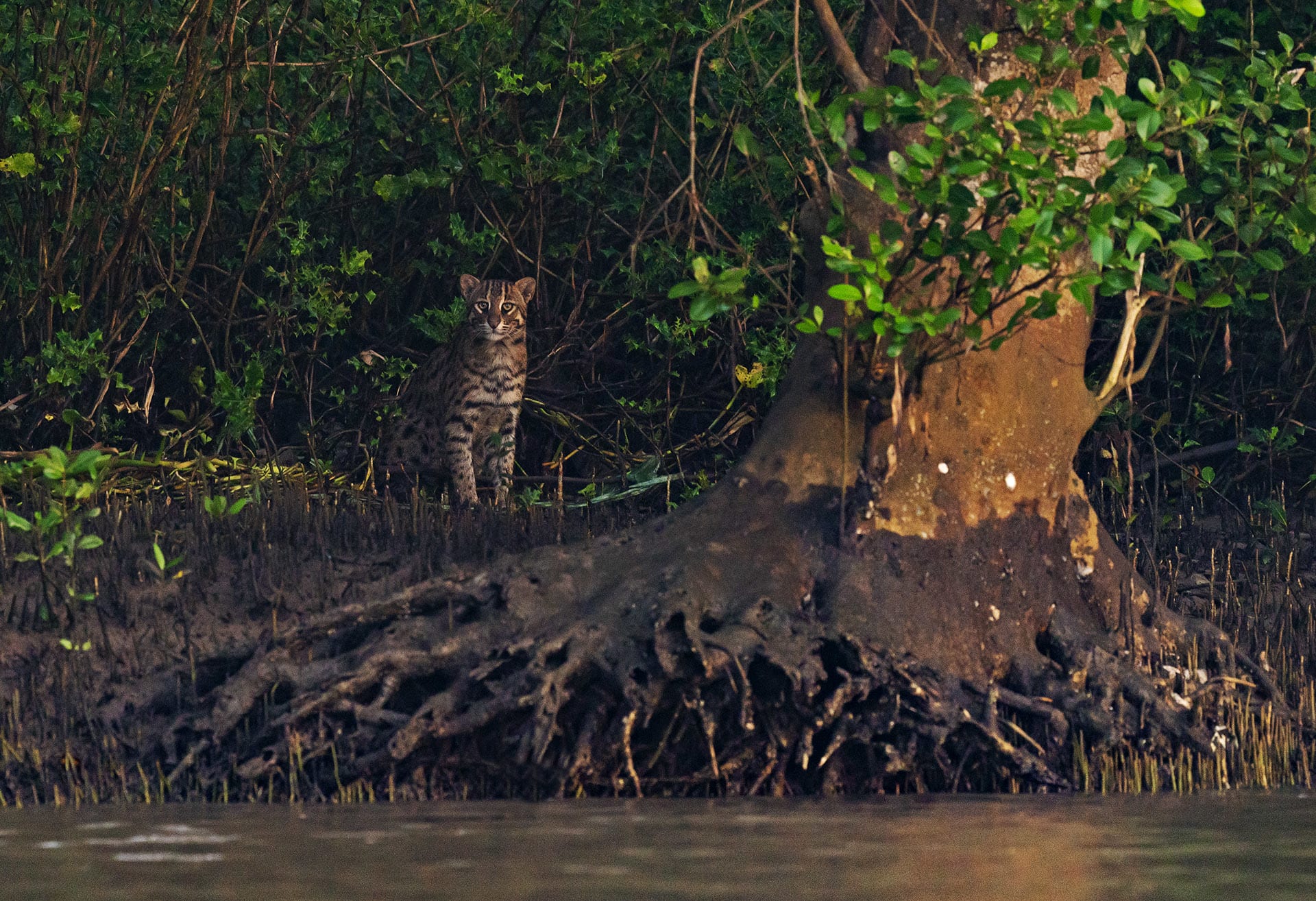 The fishing cat in Odisha faces the threat of shrinking marshlands, its habitat, but experts hope that recent conservation efforts employed by the state will help it swim against the tide.

Earlier this year, on March 1, the first-ever survey of the elusive fishing cat commenced at the Chilika lake in Odisha. Local fishermen and wildlife activists joined the Chilika Development Authority (CDA) and the Fishing Cat Conservation Alliance to zero in on the cat’s population in and around Asia’s biggest brackish water lagoon. As many as 100 camera traps were reported to have been installed in the areas where fishing cats were sighted earlier.

The fishing cat, Prionailurus viverrinus, is a wild cat species that is found primarily in wetland and mangrove ecosystems. It can be spotted across south and southeast Asian countries. Twice the size of a house cat and nocturnal by nature, it is known to feed on fish, frogs, crustaceans, snakes, and birds, and scavenges on the carcasses of larger animals. An excellent swimmer, the fishing cat spends most of its life in areas of dense vegetation close to water bodies. It can breed all year, but peak breeding season typically ranges from March to May. “Besides the north and north-eastern sections of the Chilika lake, this species can be found in Astaranga, Konark, Bhitarkanika Wildlife Sanctuary and Rajanagar areas of Odisha,” says Vidhu Jha, a wildlife researcher who has been working towards the conservation of the fishing cat and jungle cat in the country for over a decade now.

Cause for concern
In India, the fishing cat is included in Schedule I of the Indian Wildlife (Protection) Act, 1972, and is listed as Vulnerable on the IUCN Red List. Over the years, its numbers have been threatened by the destruction of wetland areas as it is more vulnerable to loss and degradation of habitats than other small and medium-sized cats. Poaching and retaliatory killing are also threats to the animal. Another concern is the depletion of fish, its main prey, due to unsustainable fishing practices.

In Odisha, the Bhitarkanika Wildlife Sanctuary is a protected habitat for fishing cats. “Since the cat is elusive, it is tougher to draw attention to its conservation as compared to say the tiger or the elephant. It continues to remain highly vulnerable in the remaining areas of the state due to agriculture, intensive fishing and aquaculture practices. And though the Chilika lake and its adjoining areas are among important fishing cat habitats in India, uncontrolled shrimp farming and tourism are major issues that have had a negative effect on the status of the local fishing cat population,” says Jha.

Ripple effect
It is to counter these issues that the fishing cat was named the ambassador of Chilika lake in October 2020. Experts say this is an important step towards its conservation in the state. Projecting the fishing cat as the face of the marshlands can help raise its profile in the state and country, as well as draw attention to the wetland ecosystems that play a major role in its survival.

“For the past year, local authorities have been creating awareness about the fishing cat in the villages by the lake. The focus has been on educating us about their habits and how to identify them, and to instill that they are no threat to our livelihood. We’ve also been instructed to inform them if we spot a fishing cat or its young ones. The goal is to ensure that they remain unharmed and their numbers grow in the future,” says Benigu Sinu, a fisherman from a village near Barkul.

Work in progress
The population of fishing cats occurring outside protected areas, however, continues to require special conservation attention. Local activists and wildlife organisations say they feel that a state-wide conservation plan should be carefully prepared considering the socio-economic context of the local people. Educational programmes aimed at enhancing the understanding of local communities of the importance of fishing cats and seeking their support in conservation activities should be developed and carried out. The staff of local forest departments should be trained to identify different species in order to help monitor them within a larger geographic range.

The fishing cat is nocturnal and an excellent swimmer. Photo: Dhritiman Mukherjee

Additionally, wells in known habitats should be fitted with safety walls to avoid trapping them. The construction of underpasses is a frequent solution worldwide to reduce roadkill mortality and should be implemented in Odisha as well. Display boards could also be set up along roads that pass through fishing cat habitats to alert drivers of their presence. “Furthermore, long-term targeted monitoring of population trends, ecology and threats of this lesser-known cat in Odisha should be carried out to understand its status and help in its conversation in the long run,” says Jha.