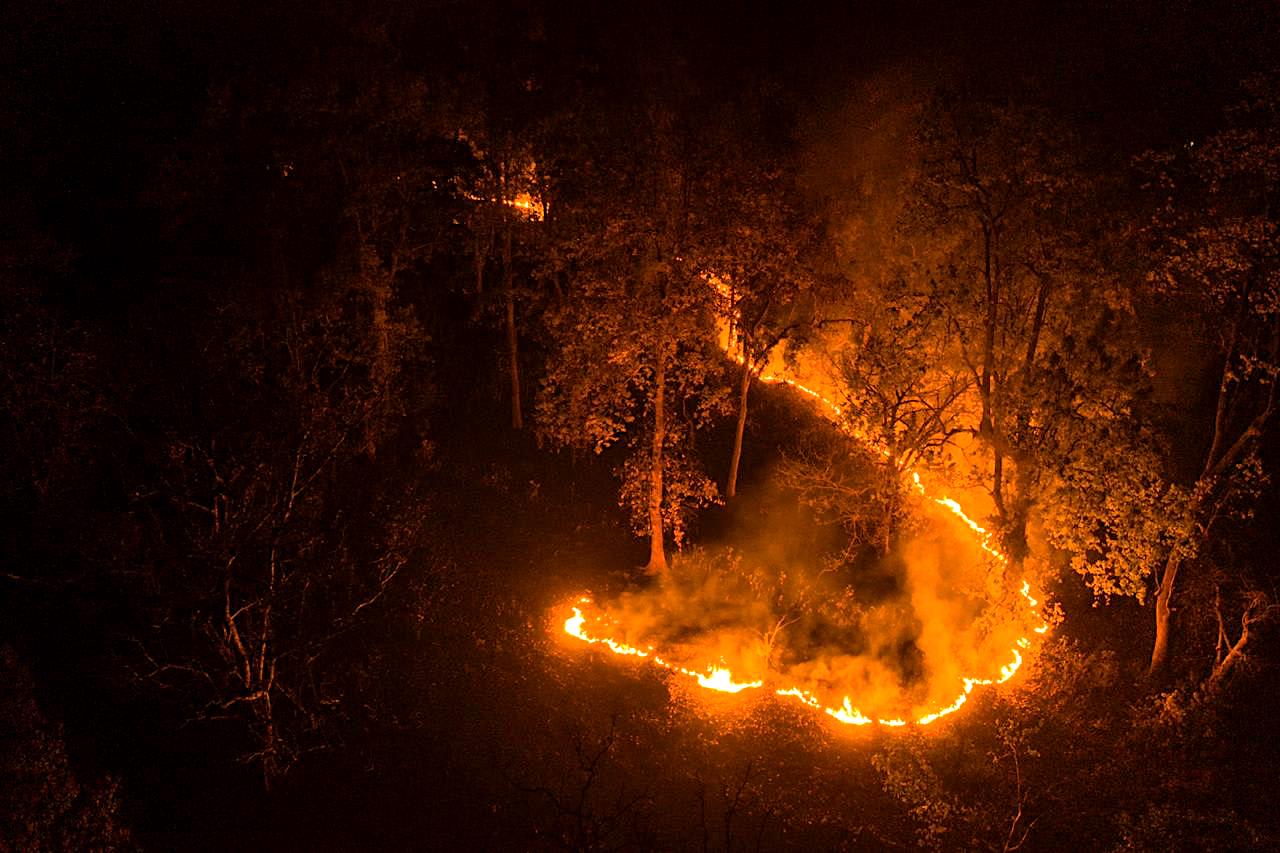 As Similipal National Park and Tiger Reserve in Odisha burned over the past month, the debate over whether ownership of the park should be in the hands of the forest department or the local community, came to the fore. Similipal, Asia’s second-largest biosphere reserve, located in Odisha’s Mayurbhanj district has been burning since February 11. A recent statement by the Forest Department notes that the fire is under control. While rainfall on March 10 brought relief to some parts of the National Park,  many areas are still burning.

The Forest Survey of India (FSI) data suggests that between February 11 and March 15, a total of 348 fire points have been detected inside the Similipal Tiger Reserve (STR), 1242 in Baripada Division, 964 in Karanjia Division and 926 in Rairangpur Division. The biosphere reserve has four divisions – STR (South and North), Baripada, Karanjia and Rairangpur.

While the local residents, conservationists and concerned intellectuals raise serious ecological concerns about this wildfire, the Forest Department (FD) says the instances of fire are very common to deciduous sal forests of the STR. Regional Chief Conservator of Forests M. Yogajayananda, who is also the Field Director of the STR said, “Even though wildfire is very common to Similipal, the instances have increased this year. Absence of rainfall and dry leaf litters combined with wind and soaring temperature fuelled spread.”

Senior forest officials like Yogajayananda as well as wildlife activists Aditya Panda and Biswajit Mohanty maintained that the wildfire inside the biosphere is caused by human action. They said that the local tribal people in the area torch the forest to clear the land for ease of Mahua flower and Kendu leave collection and poaching. However, the FSI data suggest that the areas, where people have been given the Community Forest Rights (CFR) under the Forest Rights Act (FRA), are least damaged by the wildfire. Though fire caught a few CFR areas – the forests protected and managed by the Gram Sabha, a body of people’s representatives – the villagers managed to douse it with immediate effect.

Villagers of Kuanrbil in Gudgudia panchayat inside the buffer area of the sanctuary doused a fire as soon as they noticed it on March 4. None of the officials reached there to stop the spread, said Narendra Hembram, a resident of Kuanrbil. Later, on March 7, the forest adjacent to Kolha village, under Barehipani panchayat in the buffer area, caught fire and the villagers immediately swung into action to control the flame, said Gunjaram Bodra, Secretary of the village’s CFR Management Committee. Not a single case of wildfire has been detected in Baunshanali panchayat, he added. All these are CFR areas.  All the villages which have been given CFR pattas have been on their toes since mid-February to keep the wildfire at bay, added Hemanta Kumar Sahoo, a researcher of forests and indigenous communities with long experience in STR.

Y. Giri Rao, a researcher of indigenous communities, who is closely watching the STR issues, said the wildfire instances have gone up in the villages where communities have been relocated. While no wildfire instances had been reported from Khejuri in the buffer area of the sanctuary in the last five years, this year the forest adjacent to the village caught fire. The village has been partially relocated last year. The number of fire points has gone up in the core area, where people have been relocated, he added.

The indigenous communities in fact act as the intelligence for the FD and check the poachers and timber smugglers. They are the first responders to the wildfire. However, after their relocation, the instances of poachers trespassing have increased inside the core area, said Rao, adding that these poachers tend to set fire in the forest for ease of hunting.

A national research project, Man in Biosphere by the Anthropological Survey of India advocated that human presence and people’s participation has helped in the growth of the forests inside Similipal. Relocating people without looking into their contribution towards the biodiversity conservation backfires, noted the study which included research on Similipal, published in 2013.

Mohanty Birua, Sarpanch (head), Astakuanr gram panchayat in the buffer area, asks, “How can a few paid employees who are not native to our forests substitute the role played by thousands of villagers?” Similipal biosphere is home to over 8 lakh (800,000) traditional indigenous community members belonging to 1,461 villages, out of which, CFR of 43 villages from buffer areas and more than 200 from transitional areas have been recognised.

Talking about the subtle efforts of the FD in seizing the control of forests from people, Sahoo said that forest officials have been willfully ignoring the spirit of the FRA. While the Gram Sabha should be the legal body to protect and manage a CFR area, the FD is trying to create conflict and confusion by forming Eco-Development Committees (EDCs) led by respective foresters. While these EDCs do nothing for ecological development, they only create confusion by asserting the ownership of the FD on the forests, he said.

Deepak Pani, secretary of Gram Swaraj, an NGO working for biodiversity conservation inside the STR raised concerns over the increasing tourism activities. He said while the true guardians of forests are being evicted from the core area in the name of wildlife conservation, tourists are permitted inside. It puts huge pressure on the biosphere and leads to habitat loss, pollution and increased vulnerability to wildfires.

Jujher Bansing, Sarpanch (head) of Barehipani village in the buffer area, alleged that instead of engaging local people in activities like construction of check dams and roads, the FD is engaging contractors and labourers from outside. According to him, the people who come from outside often violate protection laws and there are instances when they carelessly throw burning cigars on dry leaf litters that cause a fire.

Volunteers, community members and firefighters doused one of the wildfires at Kaliani village. Photo: Manoj Dehury

Chakradhar Hembram, former Zilla Parishad member of Jashipur in Mayurbhanj district, thwarted the allegation of mahua flower to be the reason behind the wildfire saying, “There is hardly any mahua tree in the core and buffer areas.”

Saroj Panda, the Range officer of Dudhiani in the territory area of Similipal, said forest fire is not only limited to the biosphere region but the surrounding areas were also on fire. The Fire Alerts System of FSI had recorded 686 active large wildfire incidents and 23,185 fire points in the first week of March in Odisha. Dhenkanal, Kandhamal, Angul, Kalahandi, Sambalpur, Koraput, Keonjhar and Jajpur districts are reporting increasing instances of wildfire.“It is unfortunate that the FD is trying to normalise the wildfire, rued Akshita M. Bhanj Deo, the scion of the erstwhile royal family of Mayurbhanj. “Thousands of people are battling the fire inside the STR and we at Belgadia Palace that is just 15 minutes from the buffer area are in constant fear of catching fire anytime. Blaming it on the lackadaisical attitude of the FD, its lack of planning and failure to involve communities in forest management, she urged the youth to raise voice for conservation of the biosphere.

While the forest fire posed serious threat to wild animals like deer, bears, elephants, tigers and many other animals and reptiles, a huge amount of medicinal plants and other trees have been charred. The wildfire and the resulting smoke have sounded the death knell for the honeybees, said Pani of Gram Swaraj.

Pratyush P. Mohapatra, a scientist of the Zoological Survey of India, warned that the loss of honey bees, a keystone species, might adversely impact the biodiversity of the sanctuary. He also warned that the wildfire might increase instances of human-animal conflict in STR.

According to the villagers, a herd of elephants on March 7 have strayed into Beladiha, Rangada, Raghunathpur and Canchipada villages due to the blaze. Villagers of Jharafula near Bhanjakia of under Karanjia Forest Division, Dudhiani range have rescued a spotted deer from the wildfire. Reports of such instances are pouring in.

Ghasiram Panda, a forest researcher and the programme manager of Action Aid, said the whole of Mayurbhanj district is a scheduled area governed under the Provisions of the Panchayats (Extension to Scheduled Areas) Act or PESA enacted in 1996 in order to recognise the ownership of Gram Sabha over the forests. The FRA in 2006 further strengthens this Act. Despite this, neither the ownership of the Gram Sabhas over the forests is being recognized, nor are these bodies involved in fire management mechanism.

Three-quarters of Odisha’s villages exist inside or surrounding forests, according to the Forest Survey of India (FSI) assessment. If the ownership of 40% of the forests goes into the hands of people, it will go a long way in keeping wildfires at bay, Ghasiram added.

He urged the taskforce that has been formed on March 8 to control the forest fire to look into this matter. He also raised concern that the task force is without representation from communities, tribal rights, wildlife conservation, or forest protection groups.

Climate crusader Ranjan Panda said climate change is already triggering an increase in forest drought that leads to a reduction in soil moisture thus making the forest fires spread faster. Thus, “Climate change should be integrated into forest conservation planning. The FD should promote a holistic approach and this should be integrated in the State Action Plan on Climate Change involving the indigenous communities starting from the planning phase.”

Soil conservation and water harvesting measures should also be taken up inside the forest areas for building augmented adaptation to climate change impacts such as forest fire. In this the local and indigenous communities should play the primary role, he added.