Conservation of the Ganges river dolphin will not just protect the species, but secure the future of our largest river systems 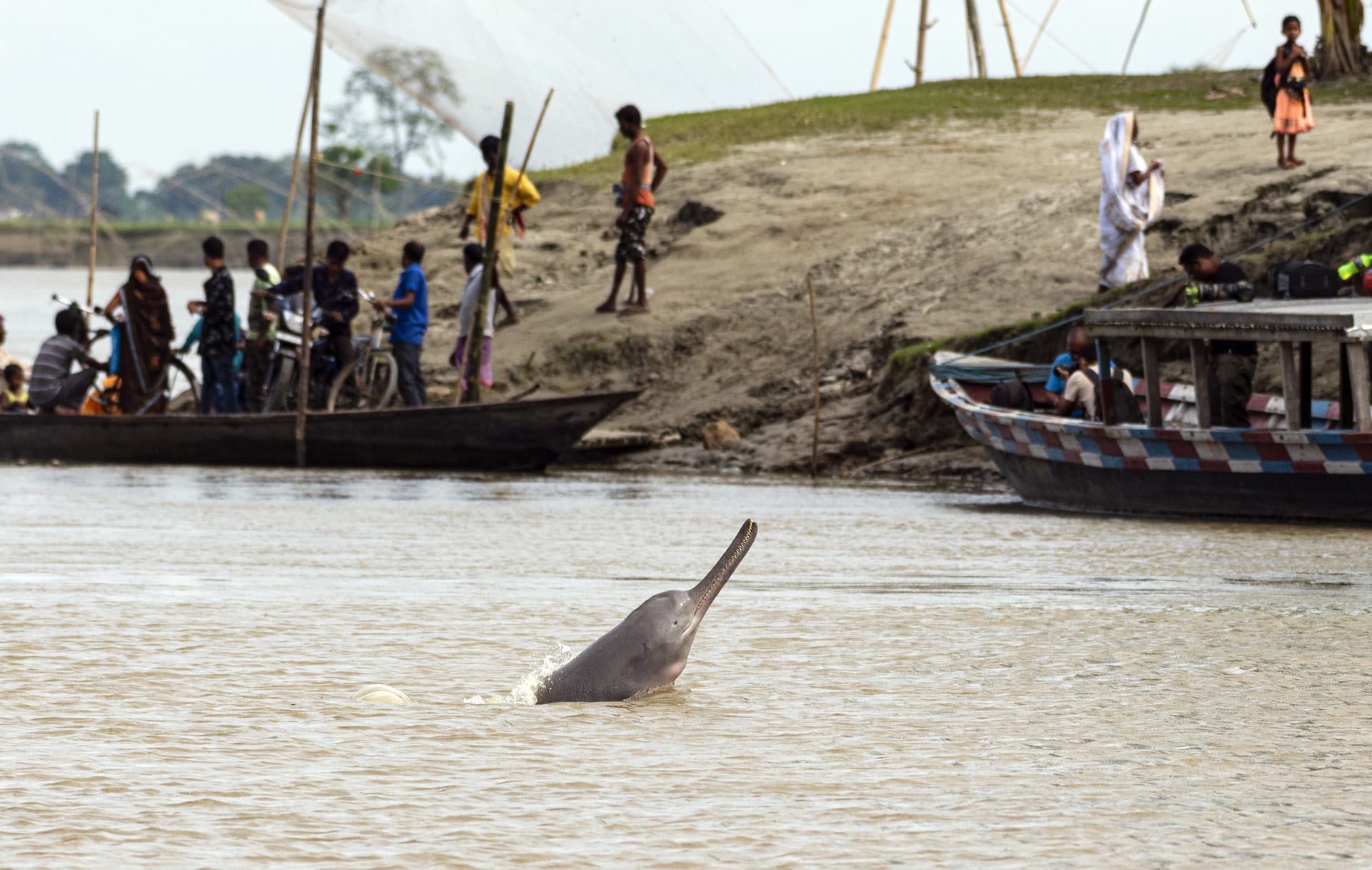 The Ganges river dolphin is an iconic species found in the Ganga and Brahmaputra river systems. William Roxburgh, a Scottish botanist who worked extensively in India, first documented it in 1801, but it got conservation attention much, much earlier. In third century BC, emperor Ashoka included it in the list of inviolable animals in 5th Pillar Edict, dedicated to preservation of plants and animals. The edict mentions ‘Gangapuputaka’ which most likely refers to the dolphin. However, today, the endangered Ganges river dolphin is in need of urgent attention. Current estimates suggest that only 3,500-4,000 are left, especially in its range in India. Over the last five decades, several efforts have tried to secure its population with mixed results. On August 15, 2020, the Prime Minister of India announced the launch of yet another initiative, Project Dolphin — a programme that aims at reviving both river and marine populations of dolphins in India. Will this project be the Gangapuputaka’s saviour?

India’s national aquatic animal, the river dolphin grows up to 2 to 2.5 metres in length. Its elongated snout can reach lengths of 20 per cent of its total body. Photo: Lakshi Nanda Majumdar
A South Asian river dolphin surfaces to breathe in the Brahmaputra river in Mayong village in Assam. In India, the dolphins are mainly found in the Ganga and Brahmaputra river systems. Photo: Lakshi Nanda Majumdar

Early and ongoing conservation efforts
The Ganges river dolphin first received attention with studies commissioned by the Government of India under Ganga Action Plan, Phase – I (1985-2000). It was considered an indicator species, which means its health told us about the water quality of Ganga. On October 5, 2009, it was also declared the National Aquatic Animal of India by the then Prime Minister Dr Manmohan Singh. October 5 is celebrated as National Dolphin Day across the country. Following this, a Conservation Action Plan was formulated in 2010 by a panel of experts. However, barring few, most of the activities could not see the light of day. In recent years, the National Mission for Clean Ganga has aimed to build awareness around the species, but many proposed key actions still remain unaddressed. Ministry of Environment, Forest and Climate Change (MOEFCC) has funded a five-year project to Wildlife Institute of India (WII), Dehradun, with two main aims: developing a recovery plan for the species and their habitat in India, and engaging stakeholders in conservation of river ecosystems in India.

Threats and challenges
Threats to the Ganges river dolphin are well documented. Dams and barrages on rivers have wreaked the greatest havoc to dolphins by reducing river flow and isolating their populations to certain dammed stretches. River flows in the Ganges River Basin are regulated by more than 900 dams, barrages and weirs. Barrages have been constructed on all major Himalayan tributaries of the Ganges.

The Brahmaputra river system is not an exception. In 2010 the IUCN – Cetacean Specialist Group wrote to the Government in India about the plight the dolphin might face due to almost 170 dams coming up on the Brahmaputra and its tributaries. At least five hydroelectric projects would directly affect dolphins in the Brahmaputra river system. It is suspected that the population reduced by more than 50 per cent during 1956-2016 across its range, mainly due to the commissioning of these dams and barrages. 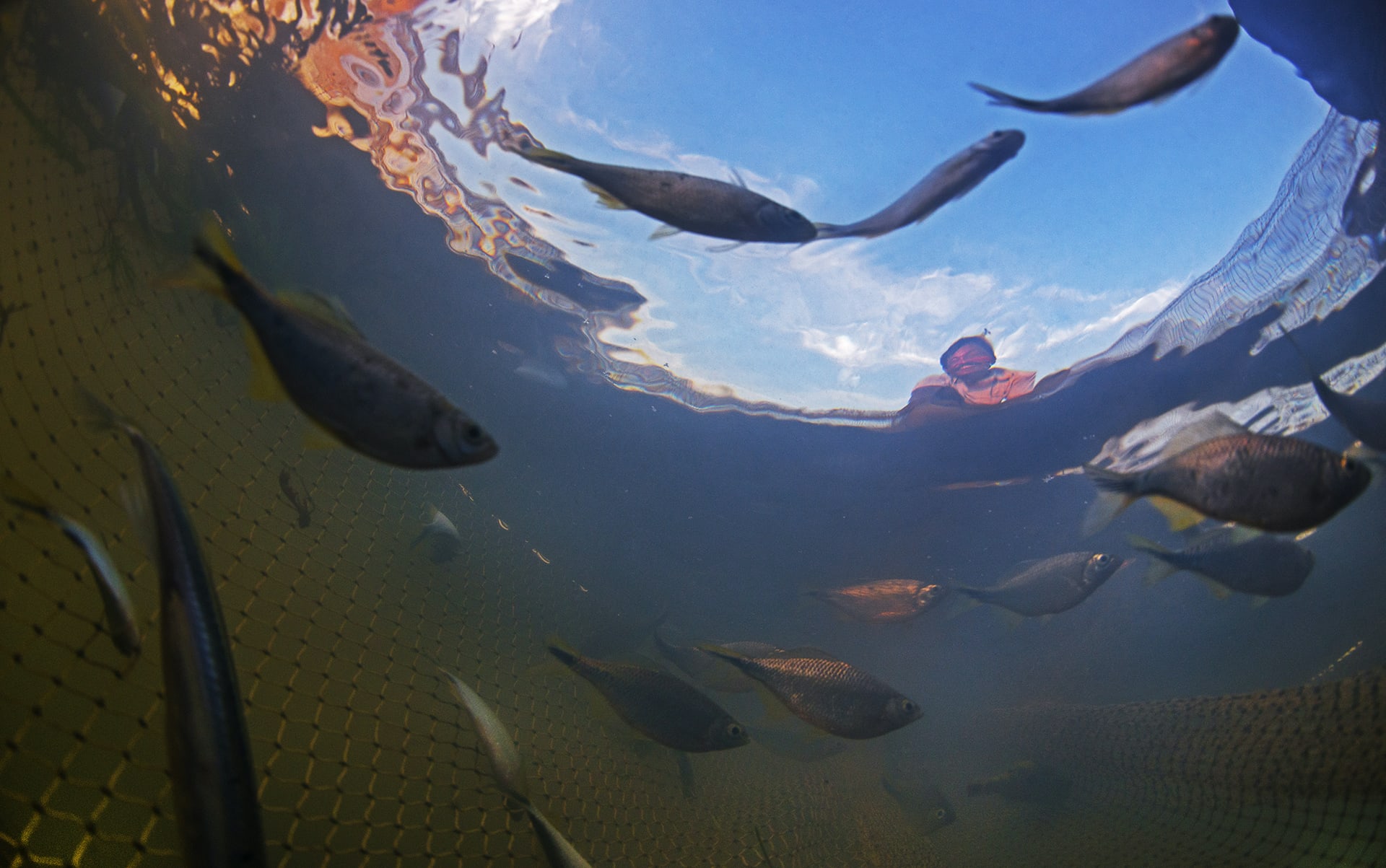 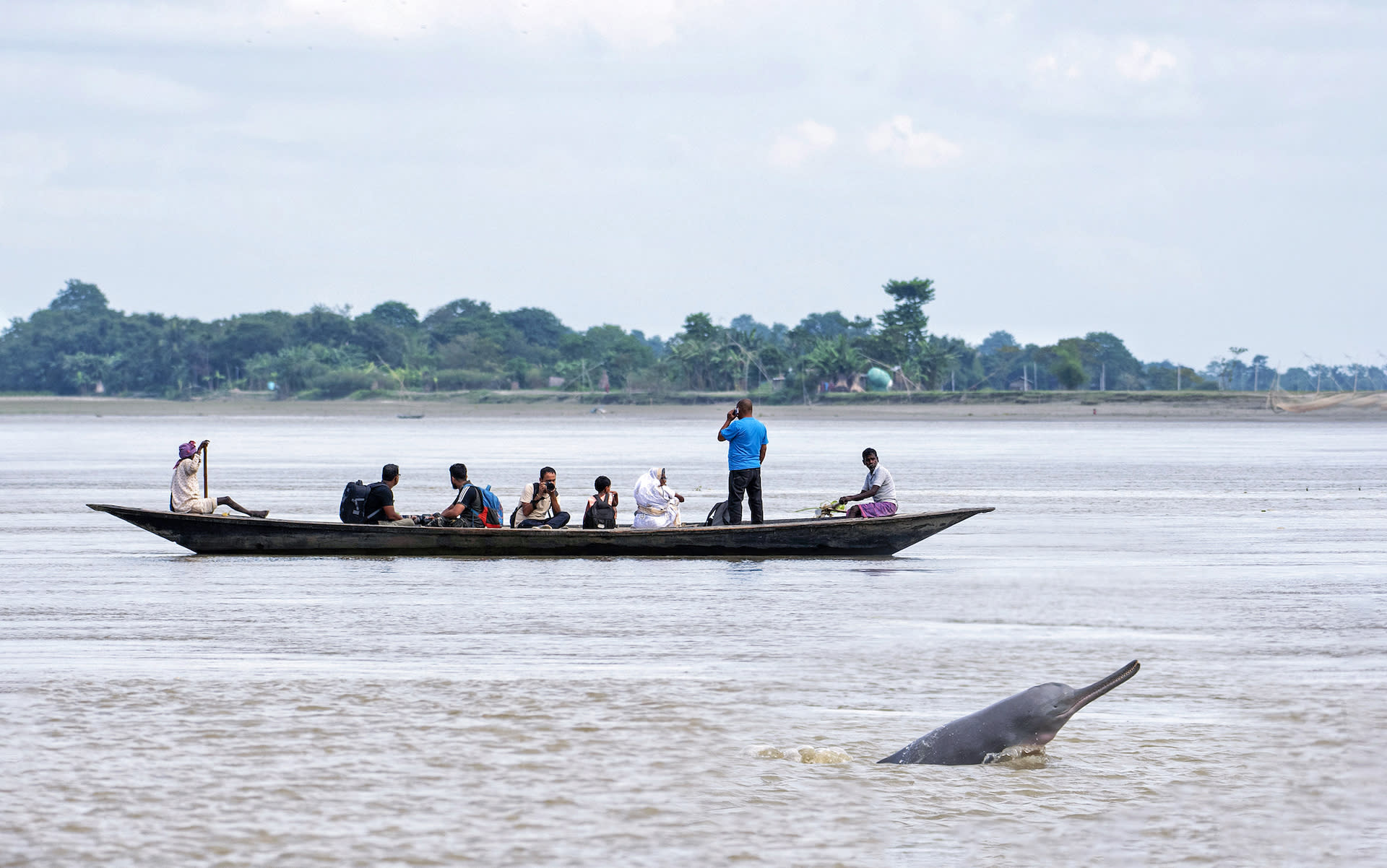 (Left) A fisherman catching fish with a net in the Brahmaputra river. Fishing nets pose a major threat to the dolphin, which gets entangled in them and drowns. (Right) The South Asian river dolphin is locally known as the ‘susu’ or ‘hihu’ in Assam, where this individual was photographed. The modification and degradation of its habitat by humans is the greatest threat to its survival today. Photos: Dhritiman Mukherjee (left), Lakshi Nanda Majumdar (right)

Targeted killing of the dolphin for body parts for mainly blubber, a subcutaneous fat layer, has gone down due to increased awareness among fishermen. But incidental catches are still feeding in the local demand of oil extracted from the blubber, used as fish baits. A recent study by the scientists of Wildlife Institute of India (WII) indicates that despite knowing that the use of dolphin oil is illegal, majority of fishermen in Assam and West Bengal still prefer selling the incidentally caught dolphins for oil. A very small proportion, about 3 per cent, are rescued and released. In 2017, the environment and forest department of Bihar notified an ex-gratia support programme for the damage of fishing nets while releasing an entangled dolphin. The effectiveness of the programme needs assessment.

Expectations from Project Dolphin
A species recovery plan aims at increasing distribution and population of the target species. Project Dolphin must have the same mandate. Logically, this can be achieved by reducing potential threats. Local threats such as bycatches are easier to address through raising awareness, better enforcement, incentivizing fishers for damage of nets by the entangled dolphins, or improving fishing gear to reduce dolphin entanglement.

However, the larger threats need to be first acknowledged by decision makers, followed by change in policies. Effects of dams and barrages on the dolphin population and river flow is well recognized. Are we in a position to take a policy decision to prevent further fragmentation of riverine habitats by constructing more of such infrastructure? If yes, let’s dream for a better future, otherwise we must prepare for nightmares. 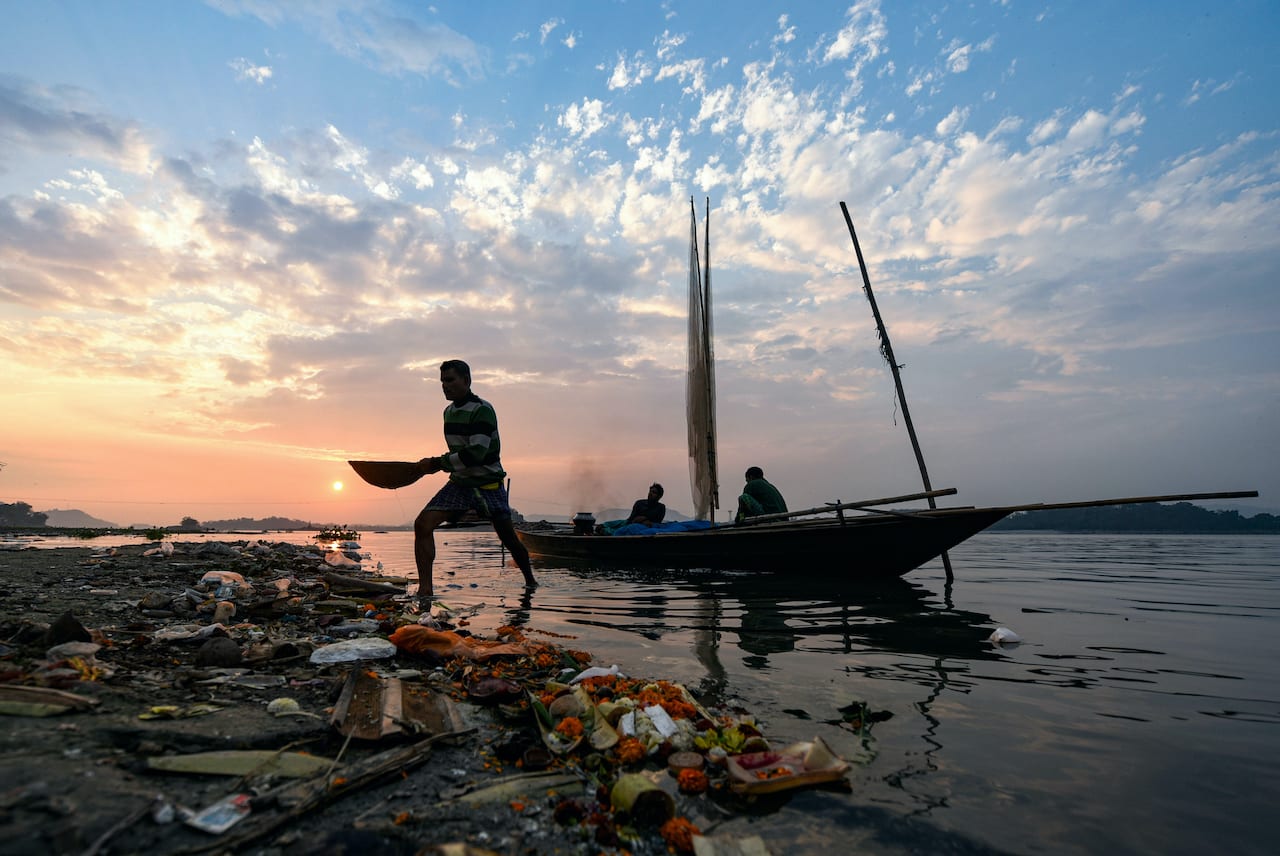 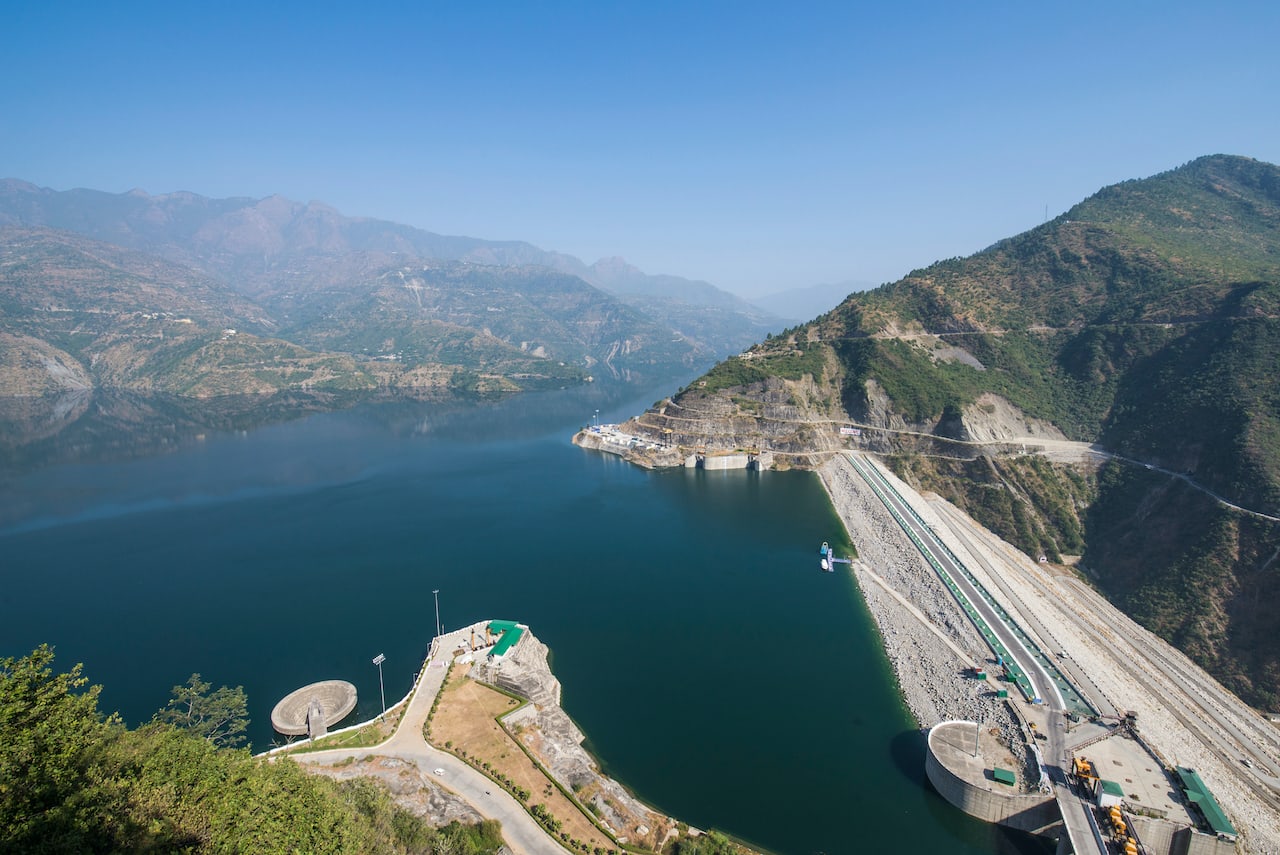 Threats to the dolphin’s survival include pollution of rivers (left) caused by human activity and construction of dams (right), which inhibit the seasonal migration of these mammals. Photos: Talukdar David/Shutterstock (left), valdiya_ravi/Shutterstock (right)

Scientists have raised concerns on the impacts of navigation on the physiology and ecology of dolphins. The National Waterways Act 2016 promises to turn 111 rivers into cargo-carrying waterways, 38 of these overlap on approximately 90 per cent of the habitat of the Ganges river dolphins. Though considered a ‘greener’ mode of transportation, it would bring murky days not only for dolphins but for both river ecosystems and people depending on it for livelihoods. Expectations of a thriving dolphin population in such a situation is being ‘super optimistic’.

Checking sources of river pollution, such as industrial and domestic wastewater, is in focus in the National Mission for Clean Ganga. This would have a positive effect on the river water quality, once all the ongoing projects are completed. But, pollution from other sources are a major cause of concern.

Like all ecosystems, the river is an open ecosystem, receiving material from the surrounding environment. Activities in the river basins have a great influence on the river. In the Ganga Basin, about two-third of the area — approximately 0.56 million square kilometers — is under agriculture. The states situated in the basin consumed 0.11 million metric tonnes of technical grade pesticides during 2014-15 and 2018-19. A comprehensive study on pesticide pollution in the Ganges system has not been done but site-specific past studies clearly shows significant level of chemical pesticides in the river ecosystem components, including the Ganges River Dolphin. We do not know much about the effects of pesticides on physiology and reproduction of the dolphin, which stores the highest level of organochlorine pesticides moving up and increasing manifold at every level of the riverine food chain. Organochlorines are fat soluble chemicals; dolphin’s fatty body causes more accumulation of such chemicals.

A subadult South Asian river dolphin that was caught in a gill net in the Farakka Feeder Canal, originating from the Farakka Barrage in West Bengal. Fishing nets cause considerable dolphin fatalities such as these each year. Photo: Imran Samad/marinemammals.in

The Ganges river dolphins are found in five protected areas in the Ganges and Brahmaputra basin. Bringing in more of its habitat under protection is another way to secure dolphins. But, controlling anthropogenic activities in rivers, is a major challenge. It is important to keep critical dolphin habitats, such as confluences, least disturbed and free from detrimental fishing practices. Keeping the rivers in a healthy state mainly depends on how responsibly those who use the river ecosystems behave, and how ardently government agencies act to maintain the habitat of the dolphin. Only if all these efforts are efficiently implemented can we imagine a healthy future for the beloved Gangapuputaka. 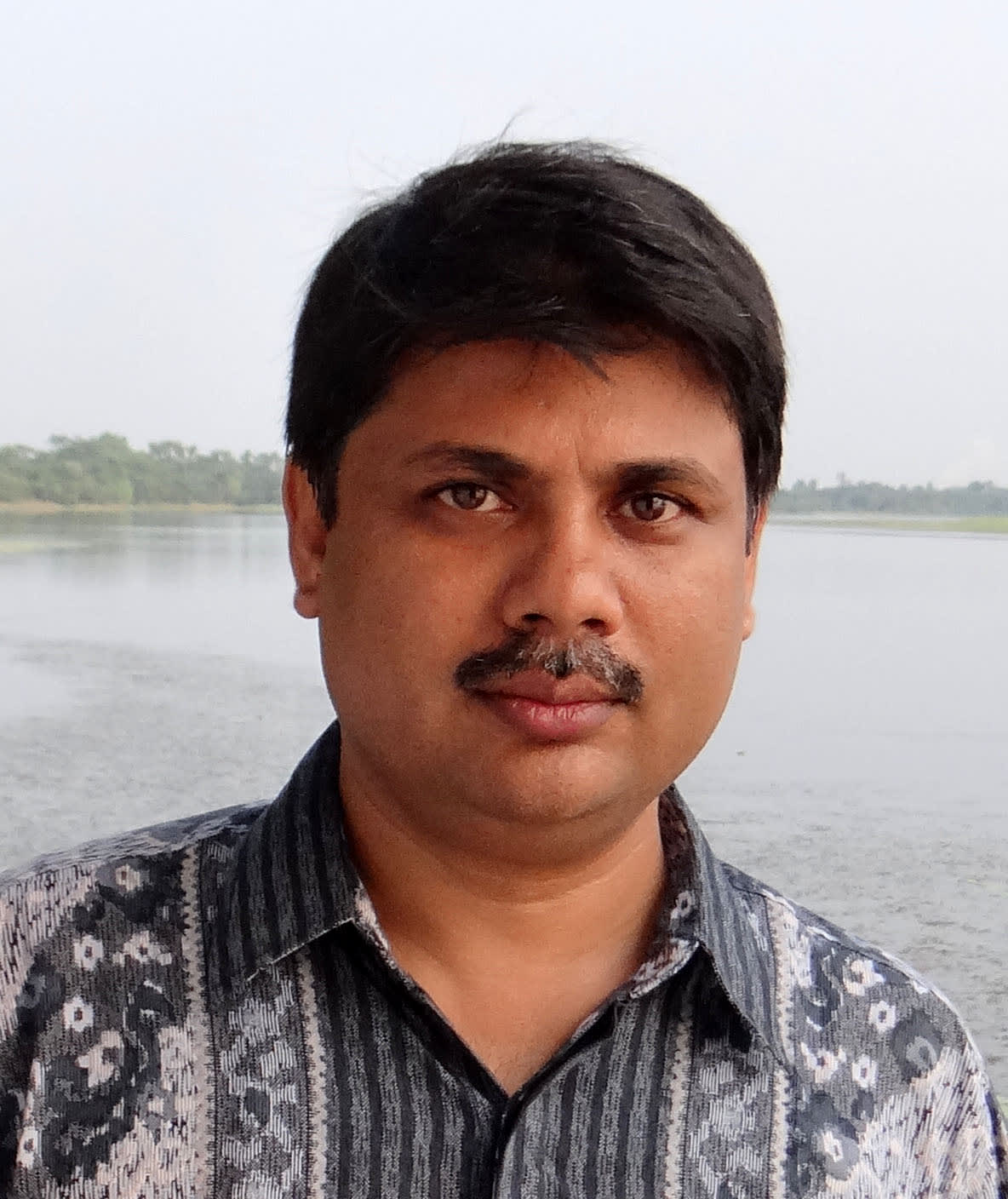 has been working in the field of wildlife conservation for the last 20 years. He is associated with the Wildlife Trust of India.