Magical Mollem: The Fight to Save Goa’s Largest Wildlife Sanctuary

Bhagwan Mahaveer Sanctuary, the state’s largest protected area is under threat from three infrastructure projects. Luckily, there’s a youth-led citizen movement taking up cudgels to save it

A majestic waterfall, milky white and roaring with fury, gushing down into an emerald pool. Lush vegetation flanks the cascade, a dense cover of green against an open sky. This is Dudhsagar Waterfall, one of Goa’s most visited and photographed spots. And it is under threat from development.

The waterfall lies in the Bhawan Mahaveer Sanctuary, 240 sq kilometres of protected area along the state’s eastern border, which also contains the Mollem National Park. Three infrastructure projects proposed by the Goa government and funded by the Central government, threaten these forests. They are: the double tracking of the railway line from Castlerock to Kulem; the four-lane expansion of NH4A; and the laying a 400KV transmission line. These projects will require the diversion of 250 hectares of forest land (170 in the protected area) for non-forestry purposes and the felling of 59,024 trees. The projects were cleared by the National Board for Wildlife and Ministry for Environment, Forests and Climate Change over video conference without any site inspections in April 2020.

Mollem National Park is a part of the Western Ghats, one of the world’s eight most significant biodiversity hotspots. The park’s mountain ranges are older than the Himalayas. Photo: RealityImages/Shutterstock
Cover: Dudhsagar, literally meaning a sea of milk, is one of the tallest waterfalls in India. The river Mandovi, one of Goa’s main rivers, plummets over peaks of the Western Ghats to form these gushing tiered falls. Cover photo: Nirmal Kulkarni

These forests are important for many ecological reasons. The protected area is part of the Western Ghats, a 150 million-year-old green cover and biodiversity hotspot. “The landscape has tropical evergreen, semi-evergreen, mix moist and dry deciduous forests. Together these provide niche habitats to an array of wildlife, most of which are endemic to the Western Ghats. Evolved over centuries, these critical ecosystems are vital for Goa’s Dudhsagar and Ragada rivers as well as the macro-climate of the region,” says Nirmal Kulkarni, Herpetologist, and Member, Goa State Biodiversity Board.

In June, Kulkarni was one of 149 scientists, conservationists and activists who wrote a letter to Prakash Javadekar, Union Ministry for Environment, Forests and Climate Change (MoEFCC) noting their concerns about the projects and stating the importance of these forests. In the letter they mention ”the protected area is home to more than 721 plant species, 235 bird species, 219 butterfly species, 80 odonate species, 70 mammal species, 75 ant species, 45 reptile species, 44 fish species, 43 fungi species, 27 amphibian species, 24 orchid species, and 18 species of lichens.” 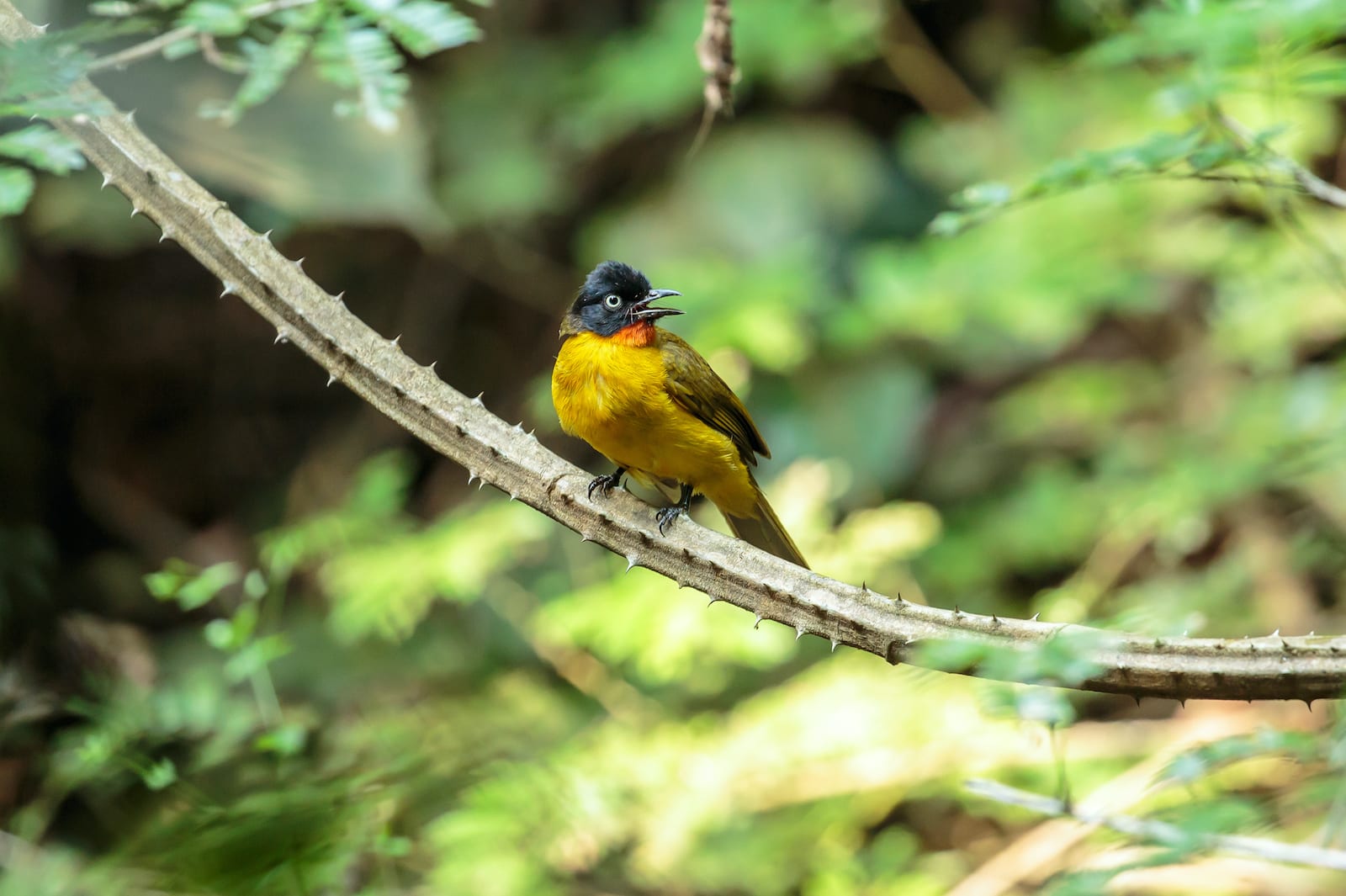 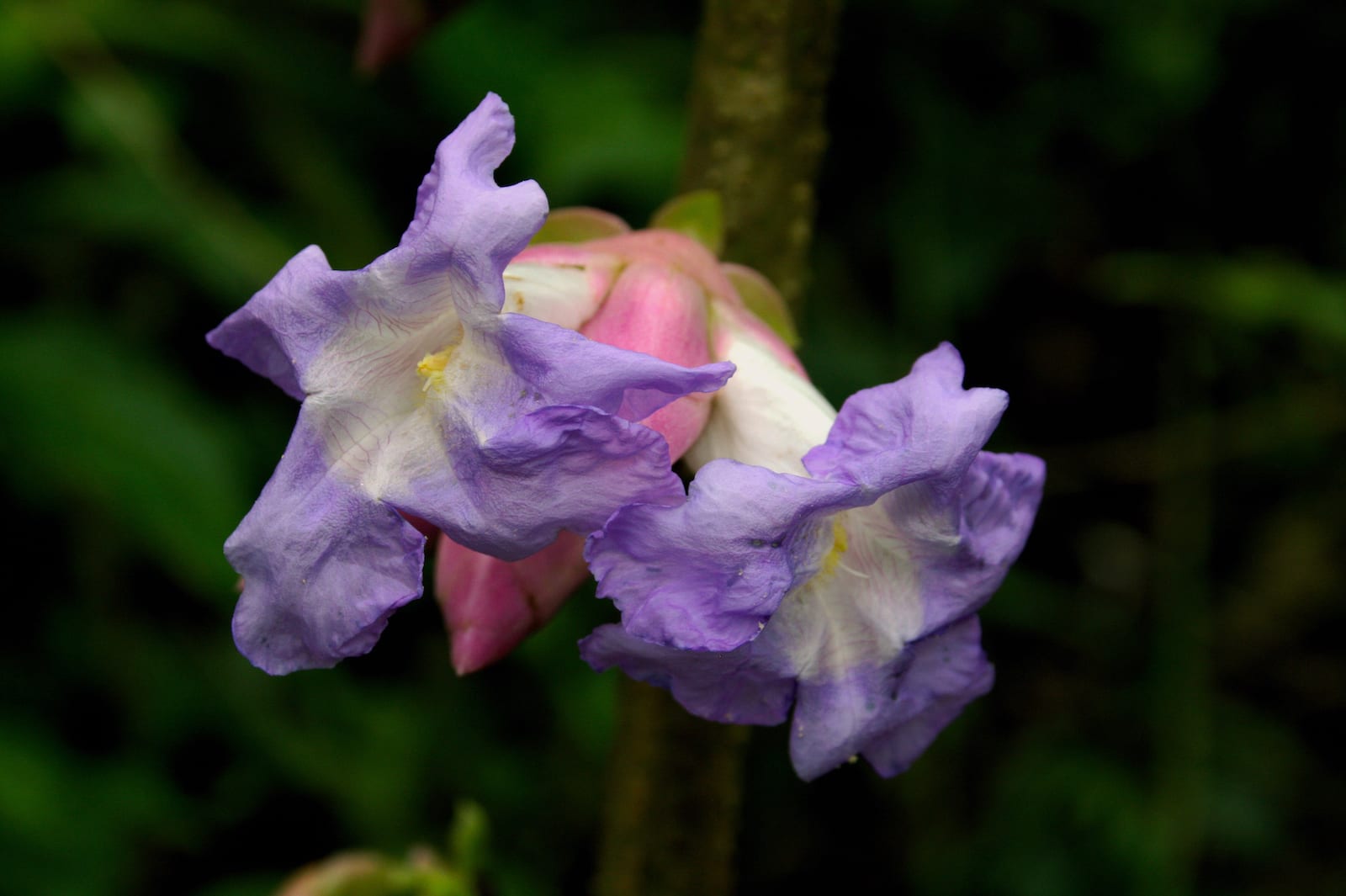 (Left) The flame-throated bulbul, only found in the Western Ghats and the forests of southern India, is the state bird of Goa. (Right) Topli karvi (Strobilanthes sessilis), a wild mountain flower found in the Western Ghats, blooms in large numbers once in every seven years, creating endless carpets of mauve and purple. Photo: Edwin Godinho/Shutterstock (left), Nirmal Kulkarni (right)

Atul Borker of Nature’s Nest Conservation Centre spends his days documenting wildlife in and around these protected forests, while focusing on otters. “Here you can find Asian small-clawed otters, the smallest otter in the world…Very few know they even exist,” he says. In the nine months since he started his research, he has spotted numerous creatures common and uncommon, from the brown palm civet, to black panther, sloth bear, pangolin, and dhole.

Additionally, these forests are home to tribal communities like the Dhangars, buffalo herders who depend on its streams for their livelihood. The rivers in these protected areas feed Goa’s main rivers, many of which provide drinking water to its people.

(Top) Minervarya gomantaki or the Goan cricket frog is a species found along the lowland forests of Goa. (Above left) Khaire’s shieldtail is a newly described snake species from the Western Ghats easily recognised by its smooth, glossy and highly iridescent skin. (Above right) Beddome keelback, a snake widely found in the Western Ghats, is usually spotted along streams and edges of waterbodies. Photos: Saunak Pal (top), Nirmal Kulkarni (above left and right)

Abundant in natural diversity, the forests are an important tourism spot for hikers, birders, herpetology enthusiasts, and wildlife photographers. Now, this ecological and tourist hotspot is in danger of being destroyed. Activists argue that the projects will cause irreparable fragmentation of the forests and disrupt the wildlife corridor. Activists have also noted that altered topography could increase roadkill, landslides, decrease water quality, restrict movement of arboreal mammals, reptiles, fishes and amphibians, disrupt seed-dispersal and pollination, cause soil erosion, and more.

Since June 2020, activists, environmentalists, scientists and concerned citizens have been protesting these projects. One of the biggest questions they are asking is: “Who will these projects benefit?” Goa’s Chief Minister Pramod Sawant insists that these are necessary projects and will be benefit Goans but hasn’t elaborated on how. Nilesh Cabral, Minister of Power and Environment in Goa, claims the 400KV line is to meet the state’s electricity supply, despite data that Goa has enough to meet its energy requirements, and the double tracking is to run more trains. It appears that the projects are mainly to facilitate movement and create infrastructure for a coal-carrying corridor linked to the Mormugao Port Trust (MPT).

The clarion call is Save Mollem and Goyant Kollso Naka (We don’t want coal in Goa). In July 2020, the NGO Goa Foundation petitioned the Central Empowered Committee (CEC), contesting the process of granting permissions. “The issue is that we are not taking our decisions based on good information, good data, and time, but because somebody somewhere wants things to happen,” says naturalist Parag Rangnekar, who is part of the newly-formed State Wildlife Board.

Additionally, there is no plan for “compensatory afforestation”, which is a tenuous issue in Goa from previous mishandling of compensations, and the fact that Goa doesn’t have enough land for planting so many trees.

Initially the protests were online. Activists, conservationists, scientists, teachers, and even tourism stakeholders sent out letters opposing the projects. Social media saw tweet storms, Facebook lives, and webinars. A Change.org campaign petition was started. Thousands of emails went to the National Board for Wildlife through Let India Breathe.

May saw the formation of a youth-forward citizen movement Amchem Mollem. “We got together and said, our wild spaces are under threat and we cannot sit aside and do nothing. Our approach is completely fact- based — we look at the legal angle, the policies, and use data and figures to back what we are saying,” says member and conservation biologist, Gabriella D’Cruz. “We see this movement as an investment into our own future in Goa.”

Amchem Mollem is volunteer-run and members use their skills across nine different teams including art, science, legal, outreach, strategy, and social media. There is a creative side to the activism too, from mask-making contests for students, people baking cakes, doing intricate artwork, painting murals, or creating illustrations. “I have been visiting Mollem since I was a child. It affected my outlook on wildlife and nature. The forest hasn’t changed in these decades, and I do not want it to change now,” says illustrator Trisha Dias-Sabir. She and multidisciplinary artist Svabhu Kohli are the art coordinator and curators of the My Mollem Goa Instagram account. “Art is the medium, and we use it to visualise facts and data. This page is for people who want to get involved in a way that is not intimidating or political,” she says.

(Left) Residents of Goa held a peaceful march at Mollem and Collem on August 15, 2020. (Right) On November 5, 2020, over 3,000 citizens gathered with torches, lanterns and candles at Chandor, one of the medieval capitals of Goa, to protest against the expansion of the railway line through protected areas. Photos: Dhiraj Govekar (right) and Amche Mollem (Left)

The series of activities culminated in a protest at Chandor on November 1, 2020 where 5,000 people spent the night on the railway tracks preventing coal trains from passing. “We did everything that a responsible group of citizens could do. The government has paid no heed to us, so we had to take to the streets,” says D’Cruz.

On return from his November 2020 visit to the Centre, Sawant said there would be a satisfactory solution to the Mollem issue. Meanwhile, in late-October 2020 the High Court of Bombay at Goa stayed the project passing the wildlife sanctuary and the national park until December 2020.

Mollem National Park is not just home to a variety of flora and fauna, but also Goa’s citizens.  “It is where I have walked the forest along with stalwarts like Dr AJT Johnsingh and the late Carl D’Silva and sat across the Dudhsagar watching flying squirrels and brown civets at night” says Kulkarni. “Mollem was home then, and is home now.” 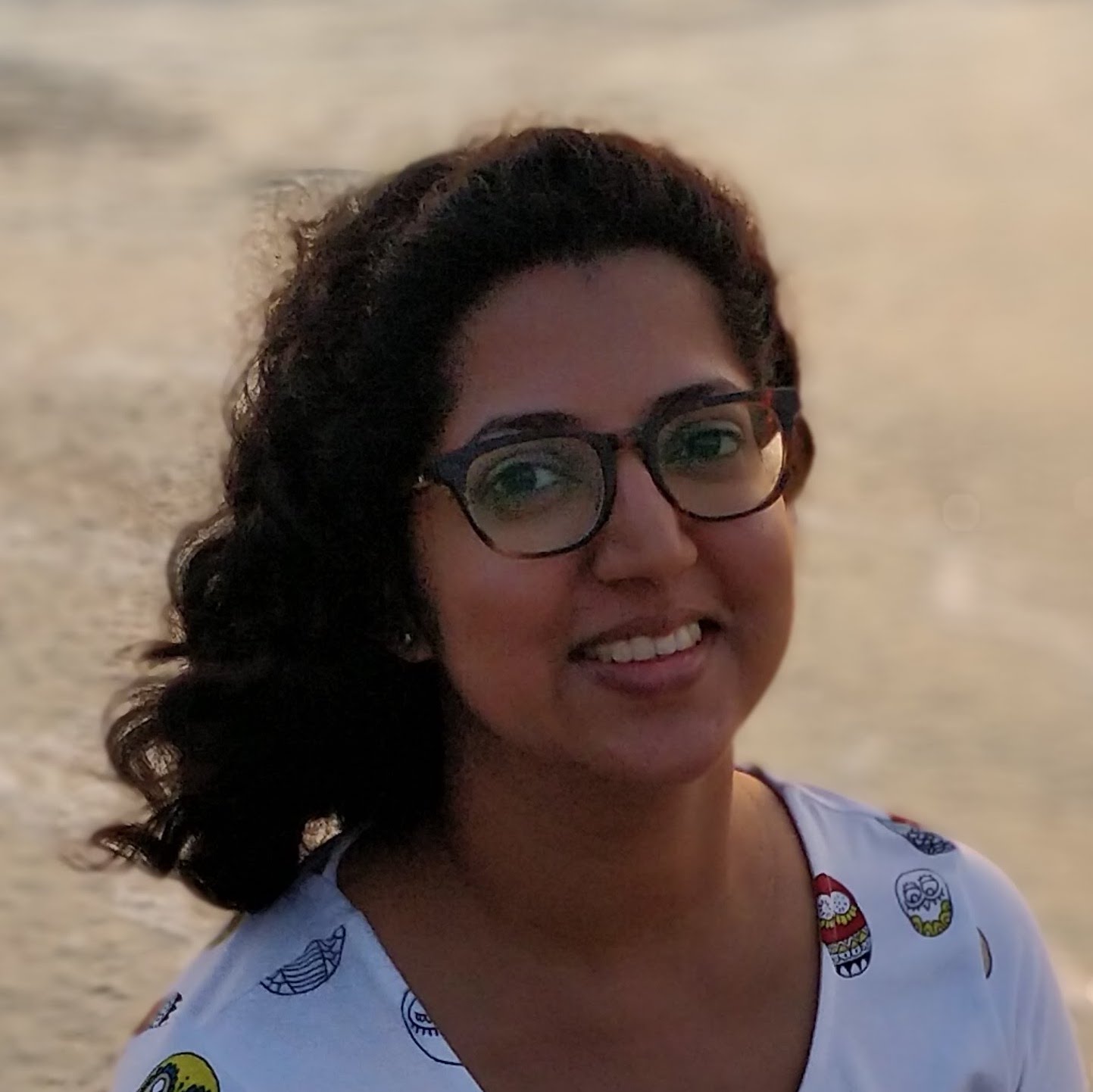 is an independent writer, and an advocate of the freelance life. She writes about food & drink, travel, her Goan heritage and strong, independent women. Follow her on @thatdoggonelady across platforms