As Goa gears up for tourists post-pandemic, restaurants are promoting their food on social media, and shark meat preparations are the most popular among them 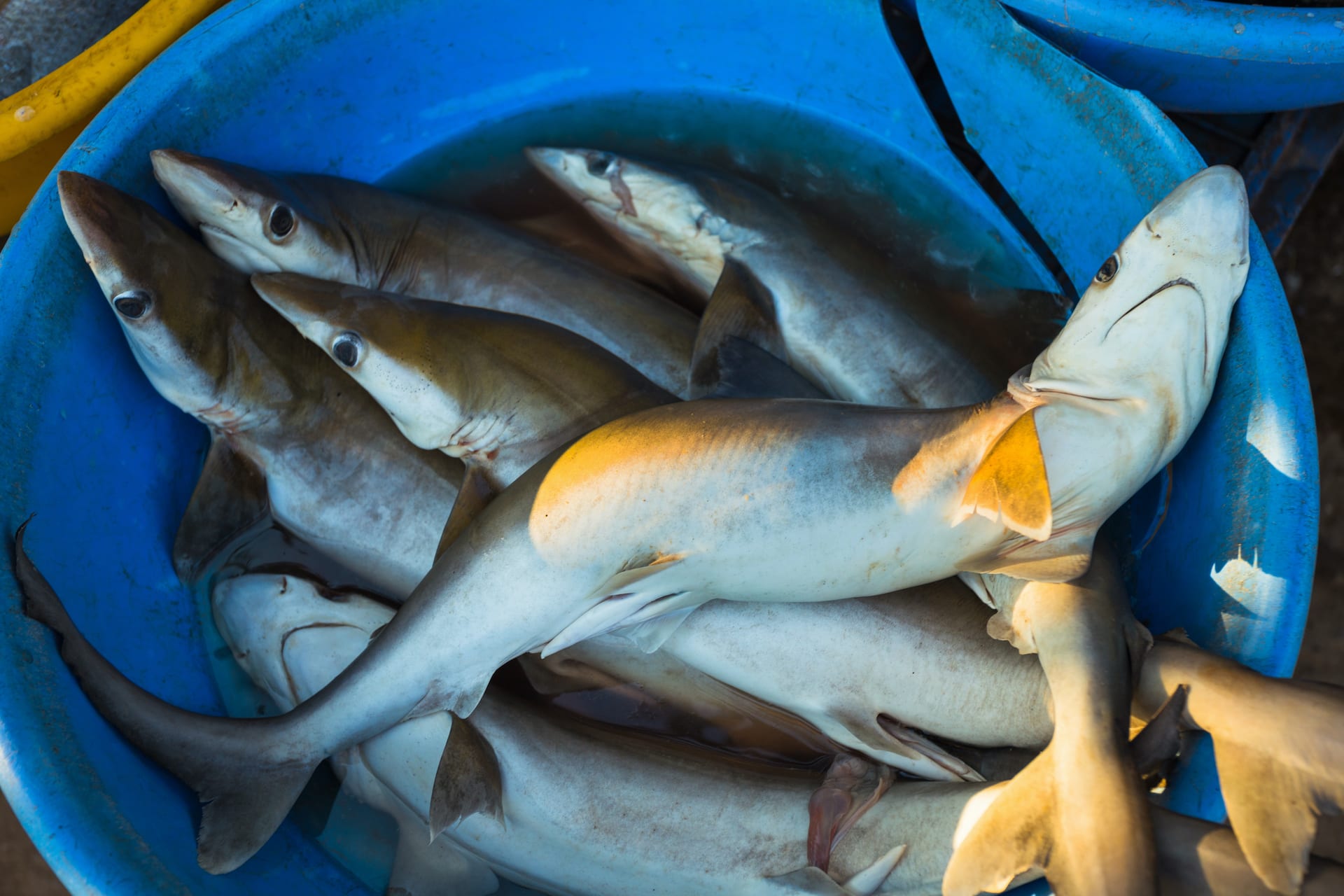 “This is crazy, Americans rarely eat shark,” exclaims an American video blogger in his April 2019 video while looking at baby sharks in a fish market in Calangute, Goa while his guide replied, “In India we do.” This is one among scores of videos on various social media platforms which have been uploaded by food bloggers, domestic and international, highlighting popular dishes made with shark meat in states such as Goa.

In fact, shark meat is gaining popularity in Goan restaurants. The initial finding of a survey conducted by InSeason Fish, a Chennai-based collective that raises awareness about seafood sustainability, which is yet to be published but reviewed by Mongabay-India, revealed that many popular restaurants in Goa are promoting dishes made of shark meat such as “shark xacuti, shark masala, and ambok tik.” As Goa is gearing up for tourists post-pandemic, restaurants are putting up a show on social media, promoting their food, and shark meat preparations are among them.

Shark meat has always been a part of the Goan diet. It is cooked in two main ways, says Fernando Monte da Silva, a Goa-based travel and food writer and a culinary entrepreneur. “First is curries, especially the ambok tik, which, as far as I’m aware, is the only non-coconut curry we have,” he told Mongabay-India. Also known as poor man’s curry as coconut milk is not used, it is a spicy and sour dish, prepared with kokum and chillies and a choice of fish meat, most commonly used is shark meat. “Another form of cooking shark is making chunks of it against the bone and frying it plain or with masala and serving it,” he said.

Another form of consumption of shark meat which is currently dying, continued da Silva, is in the form of dry fish. “In the pre-electricity era, we had a history of preserving food before the monsoon arrived. Feasts across Goa, before the monsoon, are referred to as purumentache fest or a feast of provisions that would be stocked up. Dried food items such as dried fish and pickles were sold in abundance to help people get through the monsoon. Shark meat, because of its pungent smell and potent flavour, was popular meat used in dry foods and pickles,” he said.

Shark meat has a pungent smell, and most restaurateurs say that locals, over tourists, prefer the meat, but they are trying to change the trend. “Shark meat has a peculiar smell, my mother used to wash it seven times,” Vidya Naik, chef and restaurateur at Peep’s Kitchen, a multi-cuisine restaurant in Panjim, Goa, told Mongabay-India. “We are coming up with a Goan restaurant soon, and I’m sure if we advertise it properly, there will be a demand for it. Once you get used to the smell, you’ll like it,” she said.

But Fernando Monte da Silva noted that the shark eating trend can be attributed to it being less Goan and more to the high-end, upmarket restaurants wanting to experiment with new dishes. “As an example, Bomras (a high-end Burmese cuisine restaurant in Anjuna) serves a great mango and shark salad. So because of the tourist influx perhaps, you see a trend of these new types of experimental dishes coming up, and shark meat is one of the meats being experimented with.”

Lack of awareness about shark species

Amid all the experiments and preparations for tourists, what is missing in the conversation about the species of sharks that are being eaten. Called “mori” in Konkani, all species of sharks are sold just as a shark without any classification. There are many varieties of shark that end up getting sold and eaten as mori.

“I have repeatedly come across a demand for a species of shark called milk shark,” says Divya Karnad of InSeason Fish. “This is a small species (not more than one metre in length) and fits the “baby shark” stereotype. This species is not threatened with extinction and therefore can be fished to some extent. The problem is that consumers don’t know how to identify a milk shark. All kinds of threatened species are mislabelled and sold in place of the milk shark,” she said.

The blacktip reef shark is a regular catch of coastal fisheries, such as those operating off Thailand and India, but is not targeted or considered commercially important. Photo: Yann hubert/Shutterstock Cover photo: Zhukov Oleg/Shutterstock

Aftab Mohammed runs Nuste, an e-commerce platform in Goa for selling varieties of seafood and poultry. He said Shark/mori is sold in three types – mori medium (2-4kgs), mori small and shark cubes – while noting that the medium-sized sharks are more popular because they can be eaten in ambok tik. “The blacktip shark is what is sold most I think,” he says, adding that locals are the most frequent buyers of sharks.

When asked why he doesn’t specify shark species on his list he said that there is a different species catch each time, and it also comes in stock in small quantities. “If I diversify my products too much then it will confuse people. So I keep shark as shark,” he said.

Fernando Monte da Silva said “we do not have an understanding of the kind of shark we are eating” while noting that if one is not “an expert, it is hard to differentiate between the species through a naked eye.”

What is the big deal about sharks and shark meat?

Sharks are a group of elasmobranch fish that are characterised by a cartilaginous skeleton, five to seven-gill slits on the sides of the head and pectoral fins that are not fused to the head. They are ancient fish, the earliest known sharks date back to more than 420 million years. They range widely in size, from 17 centimetres to nearly 12 metres. There are about 500 different species of sharks in the world.

Sharks live long. They grow and sexually mature slowly. Unlike most bony fish, they reproduce fewer pups at a time. Many shark species are apex predators, essential for the ecosystem they thrive in.

A recent study published in Nature shows that the global shark and ray population has crashed by 70 percent in the last fifty years. The study blames anthropogenic pressures such as overfishing as the primary reason for the decline.

India’s waters have about 160 species of sharks, out of which ten are legally protected, listed under Schedule 1 of the Wildlife Protection Act, 1972  – whale shark which was the first fish species to be protected in India, Pondicherry shark which is on the brink of extinction, Gangetic shark which is one of the few freshwater and estuarine sharks in the world (now extinct), speartooth shark, freshwater sawfish, green sawfish, and the giant guitarfish which is becoming rare as it is caught for shark fin soup popular in south-east Asia.

Shark pups are regularly sold in markets, not just in Goa but across coastal states in India. Photo: Srikanth Mannepuri

In 2016, India was declared the second largest shark fishing nation in the world. Aaron Savio Lobo, a marine conservation scientist who works at the interface of sustainability and development explained that while targeted shark fisheries have existed in India, sharks today are mostly caught as unintentional by-catch in trawl nets and gill nets.
“Big shark fisheries is a thing of the past, targeted shark fisheries are no longer considered cost-effective,” he said. Trawlers, which sweep the ocean bed, tend to catch sharks as by-catch, as do long lines and gill nets, which are targeted for mackerel and tuna.

Shark finning and shark fin exports are banned in India, but there are no restrictions on consuming shark meat, except for the species that are protected. But since shark catch has seen a drastic decline, shark catches have become rare. “15-20 years ago, among a hundred baskets of fish, we would get at least 3-4 baskets of sharks,” said Simon Pereira, a trawler owner based in Vasco. Today, in a ton of mackerel, you’ll get 3-4 sharks, mostly blacktip sharks. Hammerheads rarely,” he said.

The same species is not caught as by-catch each time, so it’s impossible to tell what gets caught in the net. “Plus, as a rule of thumb, if we do catch it, by-catch is already dead, so no point in wasting them. The solution to this has to be more structural,” Lobo said.

Is there a solution?
While many argue that transparency about species of sharks and awareness among customers is one solution to conserve the sharks, experts also advocate for steps such as better fisheries management, regulation and reducing industrial fishing.
“Transparency of information such as the species of shark served allows customers to make informed decisions about the seafood they consume,” said Alissa Barnes of InSeason Fish, who has studied shark fisheries in India since 2014. “While gathering information on restaurants that serve shark meat, we noticed that more than half of the restaurants that serve seafood do not clearly specify the type of fish that will be served on your platter, let alone the species of shark. A simple step such as mentioning the fish species served can go a long way in terms of sustainability and awareness,” she said.

“Is awareness about consumption a solution? Yes but that itself is not going to resolve the shark fisheries issue,” Lobo noted. “We need better fisheries management, regulation, trade, equality within fisheries, and better management of issues pertaining to labour. We need to address the elephant in the room. There is no real effort being made to reduce industrial fishing. There is no focus on sustainability or equitability in fishing. In fact, India’s latest fishery policy gives a push to deep-sea fishing which will perhaps make the situation worse for sharks,” he said.