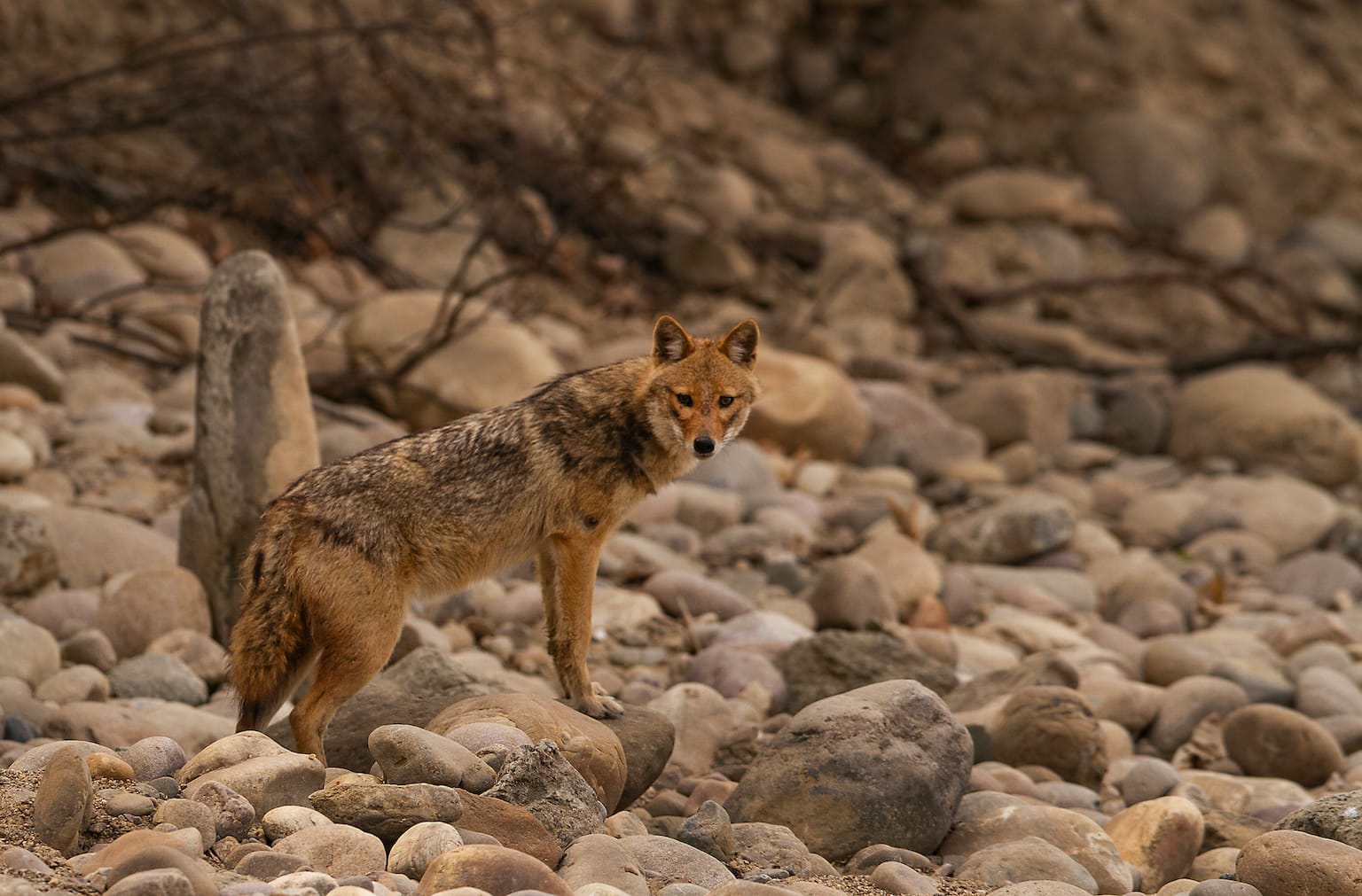 Jamir Ali runs a tea-stall at Paschim Rajbati village, four kilometres from the Netaji Subhas Chandra Bose International Airport on the outskirts of the eastern Indian metropolis of Kolkata. A canal behind his thatched-roof shop carries the waste dumped from the neighbouring households and meat shops fighting for space. Solid waste lies scattered close to the canal and street corners. The 50-year-old tea seller said that golden jackals (Canus aureus) start moving in packs once the evening sets in but have hardly been a cause of trouble to anybody. They consume food waste that’s discarded in the area, because of which, Ali claims, they “keep the area clean”. “Garbage vans do not come regularly to collect the waste, and it lies around on the ground for days. Jackals consumed the dumped food. They have never caused any trouble for us,” Ali claimed.

At the airport a few kilometres away from his shop, the jackals do not have as accepting an audience as Ali. Senior officials at Kolkata airport said jackals are a challenge to aircraft operations. And the efforts by the forest department and NGOs to capture and rehabilitate them have so far been not very successful. “There have been sightings of jackals at the Kolkata airport. Their numbers cannot be ascertained. As they pose a serious threat to aircraft operations, we had sought help from the forest department for their rehabilitation,” said Kaushik Bhattacharjee, director, NSCBI Airport, Kolkata.

“The forest department had suggested trapping the jackals in cages with baits. Accordingly, we installed several cages, but very few could be trapped. We sought help from wildlife experts to rehabilitate the jackals present inside the operational area of Kolkata airport,” Bhattacharjee said.

Earlier this year India’s Directorate General of Civil Aviation highlighted that in the light of COVID-19 restrictions leading to reduced human activity and lower aircraft movements at airfields, they may be an increase in bird/wildlife that forage, feed, and nest within or near aerodromes. It noted that because airports are placed on the fringe of large urban areas they frequently have large tracts of unused and undeveloped land as safety buffers which are attractive to bird/wildlife species, particularly as suitable habitats shrink due to urban expansion.

In India, the golden jackal is found in most protected areas, semi-urban and rural landscapes of the country, except in the high elevation regions of the Himalayas. Certain pastoral areas in western and northern India, which have abundant livestock also support high jackal densities. Due to their tolerance of dry habitats and omnivorous diet, they can live in a wide variety of habitats. Golden jackals are opportunistic and often venture into human habitations at night to feed at garbage dumps or scavenge on livestock carcasses. Golden jackals, Indian wolves, Indian foxes, and hyenas need grasslands, scrublands, open/barren lands, and ravines.

At the Kolkata airport, experts associate jackal sightings in the airport area with the availability of food and improper disposal of waste in the fringe villages such as Paschim Rajbati. The animals also find shelter in old, dilapidated buildings inside the airport. In addition, the grassland cover in the 1670-acre airport makes it conducive for jackals. The jackals were earlier present in Kolkata’s satellite areas like Rajarhat and New Town; with residential complexes springing up in these townships, the canids are now being increasingly spotted in villages close to the airport.

The Zoological Survey of India (ZSI) had planned to do radio-collaring of the jackals at the airport, but the project did not take off due to the unavailability of funds. “We had planned to do radio-collaring in 2017 as it could have helped us track the movement of jackals and find their entry and exit points. We also submitted a proposal regarding it to the airport authorities. But no funds were released, and the project couldn’t take-off,” said ZSI scientist Gopinathan Maheswaran.

In the neighbouring state of Assam, authorities at Lokpriya Gopinath Bordoloi International (LGBI) Airport in Guwahati are grappling with a similar issue, which has prompted the Assam Department of Environment and Forest to constitute a team of experts to identify, capture, and release the animals in other suitable habitats in the rapidly expanding city.

Spread across an area of 500 acres, the airport is surrounded by a residential area, two reserve forests – Rani and Jalukbari – and three villages, making it more challenging to keep the animal away from the semi-urban location.

“The airport authorities informed us about jackals making frequent appearances three months ago. We went to the airport and found that there were at least three packs of 15 individuals each. We have asked the airport authorities to strengthen the periphery area to ensure that they do not sneak inside,” Hemkanta Talukdar, Chief Conservator of Forest, Central Assam Circle, who heads the committee, told Mongabay-India.

“Being a burrowing animal, jackals like the grasslands of the airport as there is hardly any competition for food from other animals, unlike in the forest. It is very challenging to catch them, and finding a suitable location for their release is more difficult,” Talukdar said.

Bhaskar Choudhury, head veterinarian of north-east at Wildlife Trust of India (WTI), who is part of the team constituted to rehabilitate the jackals found in Assam airport, said the canids want to stay near human settlements because of the easy availability of all kinds of food. Scrub jungles and grassland patches fringing the airport and water from the surrounding wetlands (such as Deepor Beel) have helped the animal thrive.

“They carefully sneak inside the airports by digging burrows under the concrete perimeter. The grasslands inside also attract them. They reproduce very fast, and their gestation period is 63 days making it further difficult to control their population,” Choudhury said.

Capture and release of jackals

Choudhury, however, spelled out the challenges in the release and rehabilitation of jackals.

“We made a recce of the Guwahati airport and found that they do not live there. It is necessary to locate their habitat and their exact numbers inside the airport. It is a daunting task to identify their releasing area because jackals are not forest-dwelling species. They do not live in an area where there are predators. We also have to check whether they have any disease before releasing them anywhere as they cannot be eliminated,” he said.

In India, hunting and trade of jackals is a punishable offense; it is protected under Schedule II of the Wild Life Protection Act (1972) and Appendix III of CITES (Convention on International Trade in Endangered Species of Wild Fauna and Flora).

Subrata Pal Chowdhury, who recently retired as a West Bengal forest department employee recounts observing jackals at the Kolkata airport during his visit in 2006. “The grass field was tall enough to accommodate even rhinos. We immediately asked the airport authorities to trim it. We also found that the residual food from the aircraft was thrown beside the runway. We informed the airport authorities about it, but they were quite reluctant to initiate proper action,” Chowdhury, former technical assistant (wildlife wing), forest department, West Bengal.

Chowdhury said chicken was used as bait inside cages and put at vantage points in the airport; several jackals were captured. “We also caught fishing cats, jungle cats, and mongoose. Despite our best efforts, we failed to control the jackal issue because they managed to sneak into the airport area through the periphery walls gap. We also trained airport authorities on catching them. Jackals even came on the runway during the monsoon, and vehicles had to be sent to remove them before the flights could take off,” he said.

Releasing the jackals became a significant problem for the forest department after their capture. “We used to take them to a rescue centre in the city before releasing them in the forest areas of Bankura and Medinipur districts. We cannot release most of them in the same habitat because it’s not good for wildlife. Jackals always want to stay near human habitat as the food is easily available,” he stressed.

In 2017, Nature Environment and Wildlife Society (NEWS), a Kolkata based non-profit working on environment, was handed over the task of capturing jackals by the Kolkata airport authorities.

“From 2017 to 2019, we captured around 60 jackals. We found that drains and small tunnels were running close to the airport’s periphery walls through which the jackals managed to enter. We asked the airport authorities to close them,” said Biswajit Roy Chowdhury, secretary of NEWS, claiming that they had made the airport “almost jackal free” when they wrapped up their work last year.

“We also used cages to capture them by putting chicken as bait inside it. We were initially successful but found that jackals were too clever and cunning and managed to snatch the chicken away without getting caught. The cages were then placed under the earth for their capture,” he said.