The Conservation Paradox: Missing the Meadows for the Green Turtles

Seagrass ecosystems support marine organisms which use the meadows as foraging and breeding habitats. Green sea turtles have depleted some of these habitats, creating a conservation dilemma 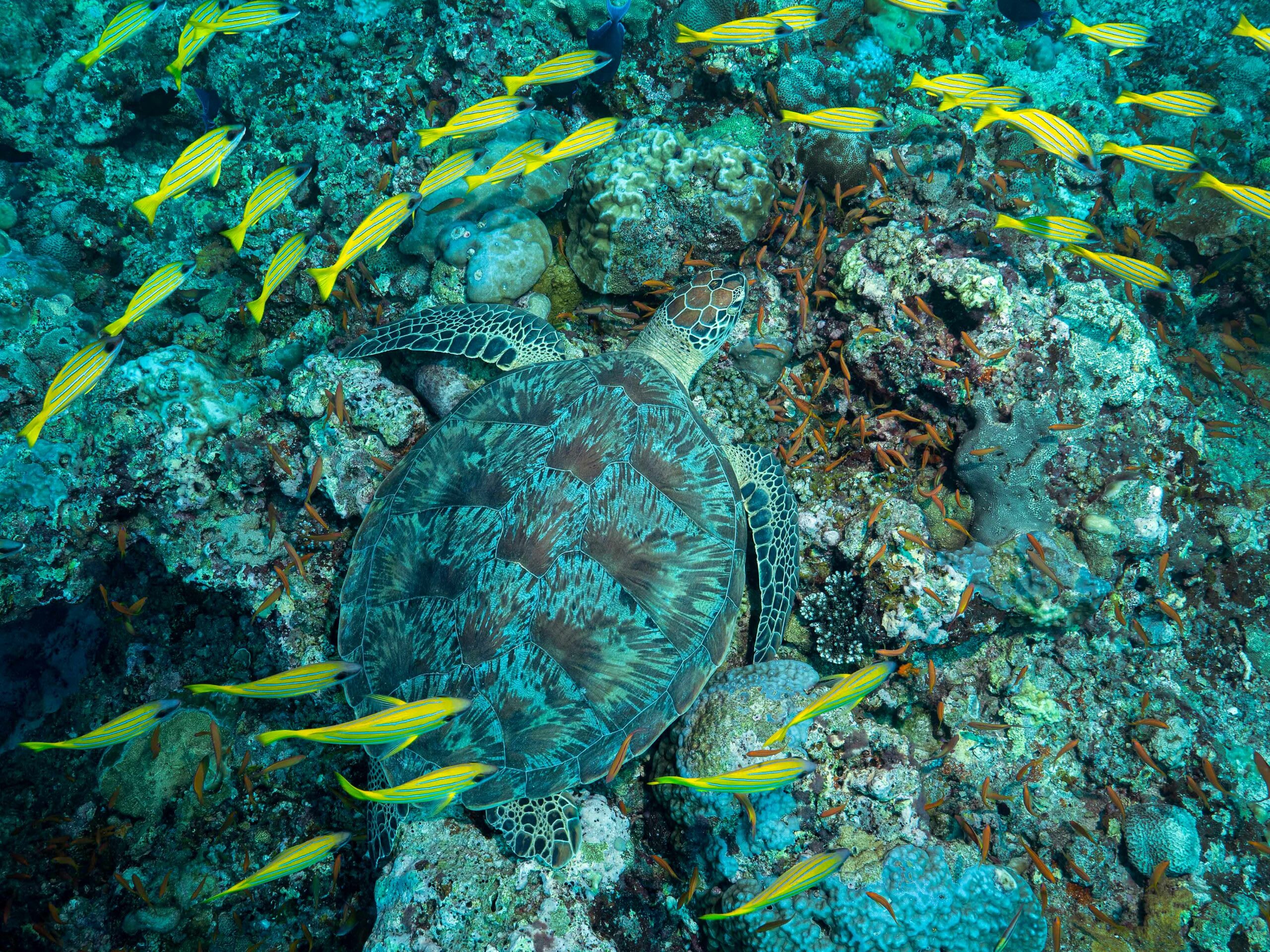 One of the largest, hard-shelled marine turtles, the green sea turtle (Chelonia mydas), is classified as globally endangered on the IUCN’s Red List. In recent times, some wildlife managers, conservationists, and policymakers worldwide have been campaigning for the legalised harvest of this marine turtle. Before we go up in arms against these “pretend” environmentalists with maybe a secret penchant for turtle meat, let us slip into a wildlife manager’s shoes. Thinking from their perspective, let us push back our feelings and emotions that this seemingly serene vegetarian marine turtle evokes and instead consider facts and evidence.

The first time I saw a green turtle was during a postgraduate field course in every naturalist’s paradise, the Galapagos Islands in Ecuador. While exploring the teeming underwater life during my spare time, I saw a majestic form slowly sailing above the reef and its busy inhabitants. As I reminded myself to breathe through my snorkel from the surface, the green turtle slowly descended between the coral to chomp on some marine algae.

Green turtles largely resemble other species of marine turtles in their ecology and life history patterns, but they differ in one critical aspect. When sub-adults shift to coastal regions after an exile of life in the open ocean as juveniles, they become predominantly herbivorous. Adult green turtles inhabit coral reefs and seagrass meadows around the world, munching on marine algae and seagrass. For this reason, they have become a flagship species for the conservation of seagrass ecosystems. Green turtles play a major role in making nutrients available in seagrass ecosystems through the excretion of consumed plant material. They prevent hypoxic conditions in seagrass habitats by controlling seagrass biomass and also the growth of algae. 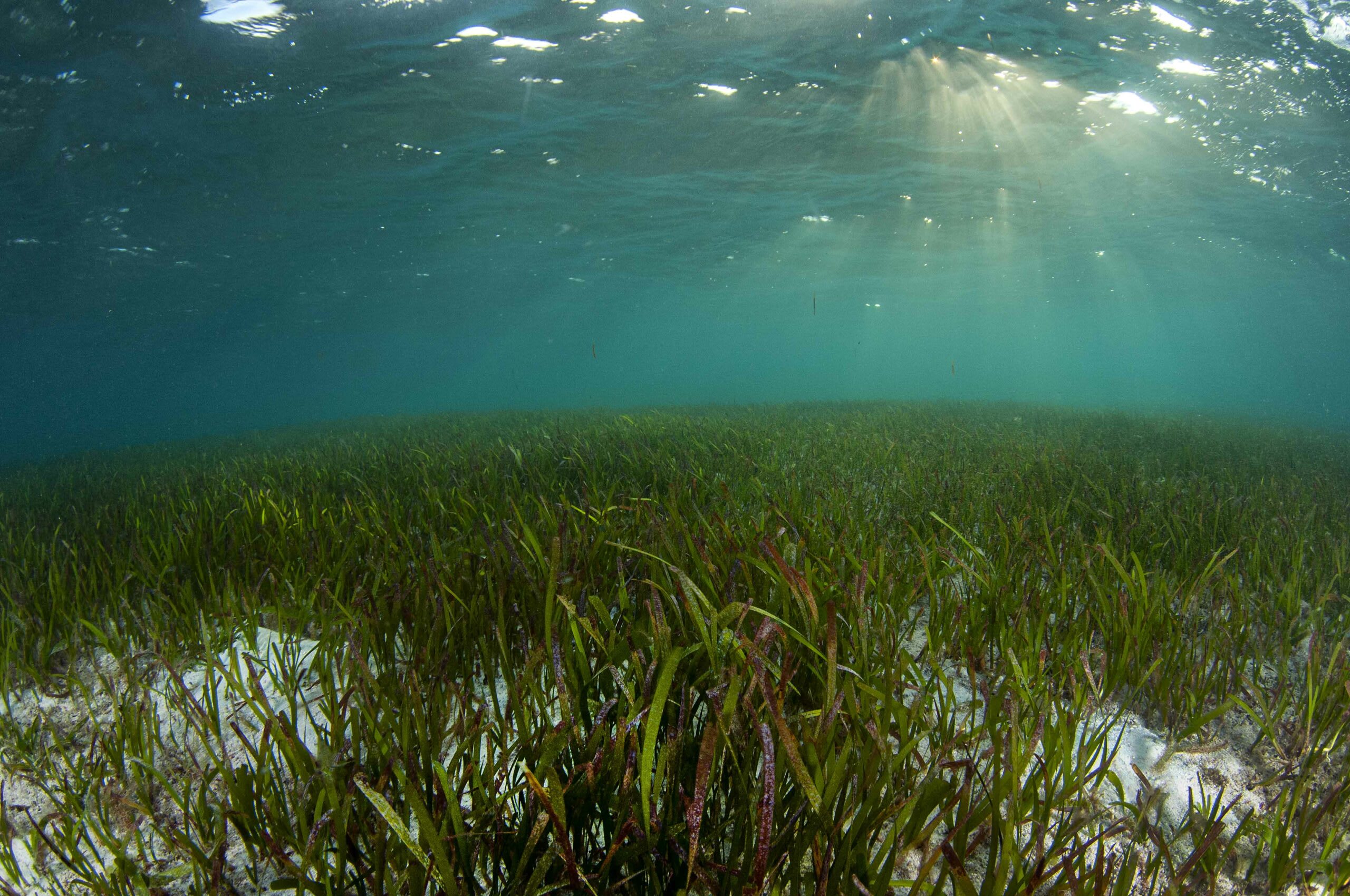 The green sea turtle is the only herbivorous species of marine turtle. Seagrass meadows such as these in the Lakshadweep Islands are ideal foraging habitats for these chelonians. Photo: Umeed Mistry
Cover photo: Green sea turtles are the second-largest marine turtles in the world, measuring around 1-1.2 m. They are named after the green deposits of fat stored under their tear-drop shaped shells. This individual was photographed in the Lakshadweep Islands. Cover photo: Umeed Mistry

Through the 20th century, green turtle abundances in these habitats declined due to indiscriminate exploitation for their meat and oil. The latest IUCN assessment in 2004 reported a 48 per cent to 67 per cent decline in the number of nesting females in 32 index sites around the world in the last three generations. Qualitative and quantitative historical records in the Hawaiian Islands suggested a decline of its nesting populations by 80 per cent, along with the loss of nesting regions. When compared with historic data, the population size of green turtles in the Caribbean Sea was estimated as 0.3 per cent of their previous numbers. Today, marine turtles are still legally harvested in 42 countries; of the 42,000 turtles estimated to be taken annually, 80 per cent are green turtles.

In India, green turtles nest in Gujarat, the Lakshadweep archipelago, and the Andaman and Nicobar Islands. With more than 1,000 nests reported per season, the Andaman and Nicobar Islands serve as a major nesting habitat in India. Major foraging habitats for this species have been reported from the Gulf of Kutch (Kachch) in Gujarat, the Gulf of Mannar and Palk Bay in Tamil Nadu, the lagoons of the Lakshadweep archipelago, and the reefs and seagrass communities of the Andaman and Nicobar Islands. In the late 1960s, 4,000-6,000 turtles were caught annually in Southern Tamil Nadu, 75 per cent of which are estimated to be green turtles. In the Lakshadweep archipelago, green turtles were killed for their oil which was used to waterproof traditional boats. A single green turtle could yield between 10-20 litres of oil which can coat a single boat.

By the time research, monitoring programmes, and conservation efforts began in the 1970s, green sea turtle population sizes were only a fraction of the estimated historical baselines. The decline in green turtle numbers happened alongside severe depletion of sharks, the only oceanic creatures large enough to prey on marine turtles, due to the direct and indirect effects of fishing. 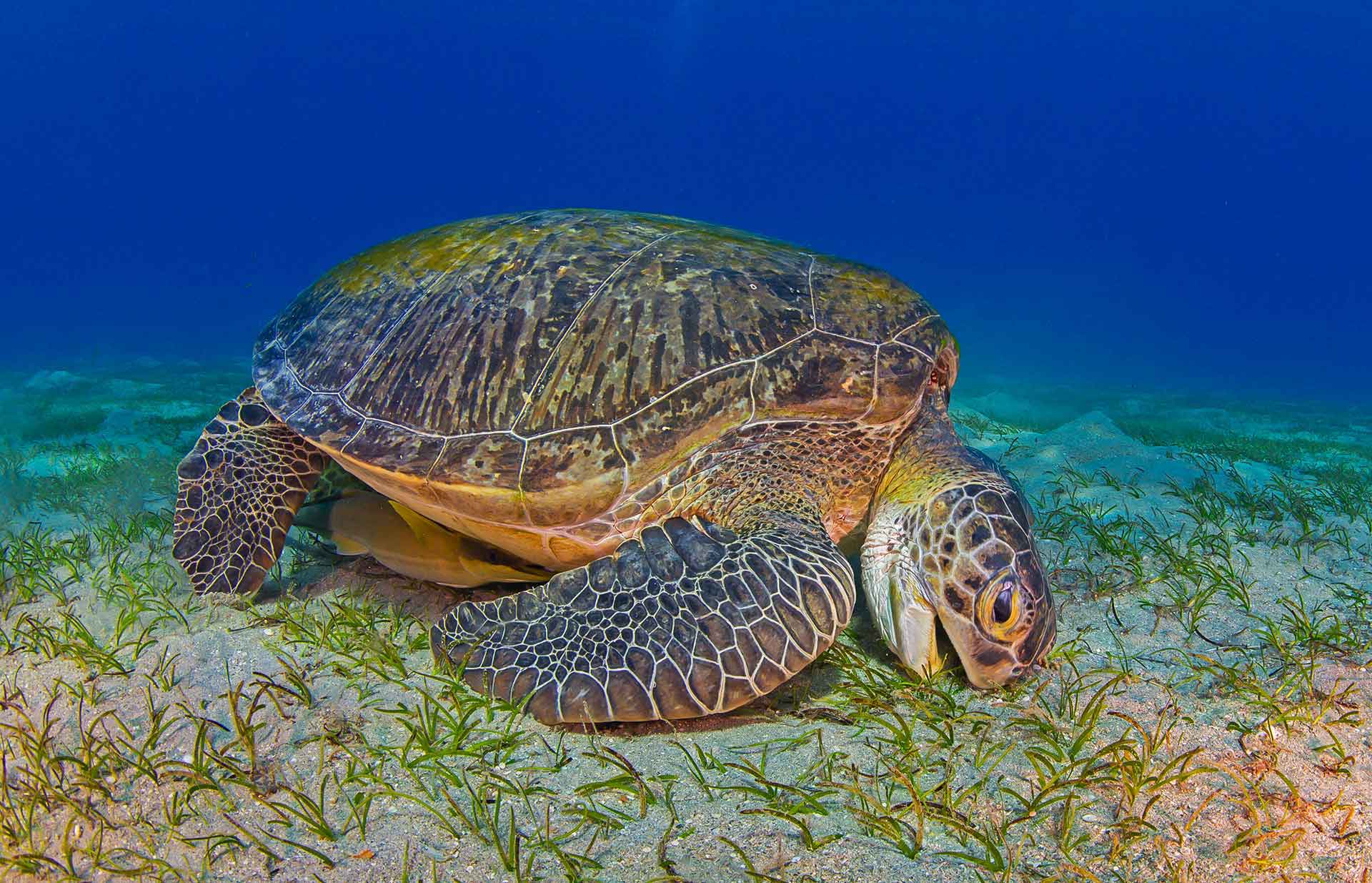 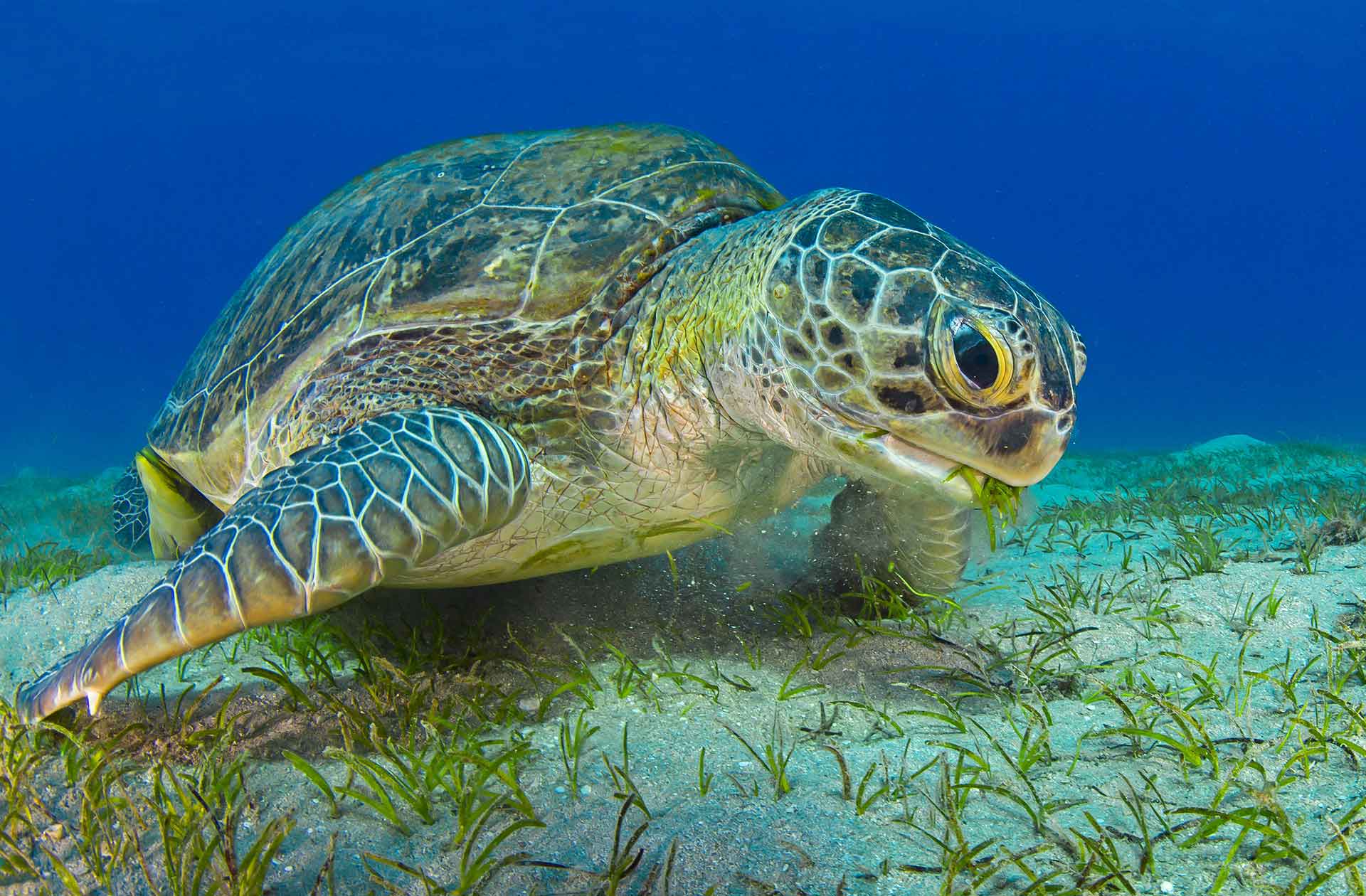 With several sub-populations now recovering in different regions globally thanks to successful conservation efforts, the role of this marine mega-herbivore in seagrass ecosystems is now being investigated. After near elimination of the top trophic levels (top order predators like sharks and green turtles) in marine habitats, the influence of predation and herbivory (eating plants) in shaping seagrass ecosystems are starting to unfold through studies around the world.

Through their long-term research in the Lakshadweep islands, the Nature Conservation Foundation has shown that high-density green turtle aggregations can modify and degrade seagrass ecosystems. In a synthesis of results from studies conducted in different parts of the world, a pattern comes to light. Green turtle populations have suddenly peaked in regions with a history of shark over-fishing. Being aggressive predators, sharks influence the feeding behaviour of their prey. Green turtles will prefer to stay away from prime feeding areas with a high number of sharks to avoid the risk of predation. In Shark Bay, Australia, where both green turtles and tiger sharks are found in abundance, green sea turtles avoid seagrass areas with high shark density. The region thus has a healthy seagrass ecosystem, and a lot of fishes and invertebrates use the pastures as nurseries and breeding grounds. However, the state of seagrass habitats in Derawan (Indonesia), Bermuda, and Lakshadweep Islands (India) tell a different story. Seagrass meadows in Bermuda have been completely decimated by intensive green turtle herbivory. In Derawan, seagrass meadows have been fragmented and have reduced significantly because of high green turtle densities. The seagrass meadows in the Lakshadweep Islands have decreased in productivity, biomass, and cover due to intensive herbivory by green turtles. The meadows are slowly starting to be taken over by faster-growing pioneering species of seagrass from the two longer-lived species. Fish stocks which are also important for subsistence fishery and that depend on these slow growing climax species of seagrass in the region reduced as a consequence. Dwindling seagrass resources and increased conflict with resentful fishers makes this green turtle population vulnerable. 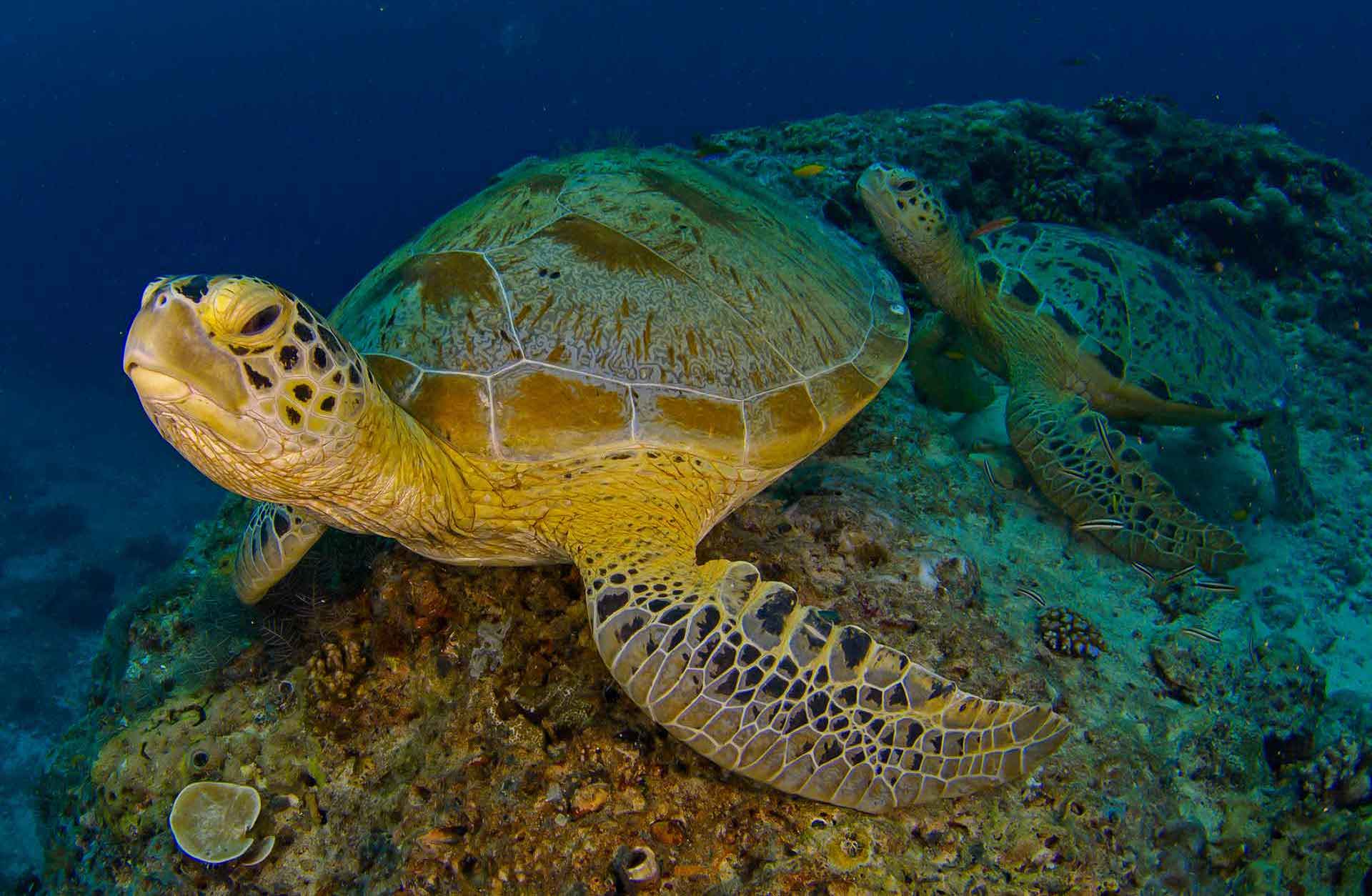 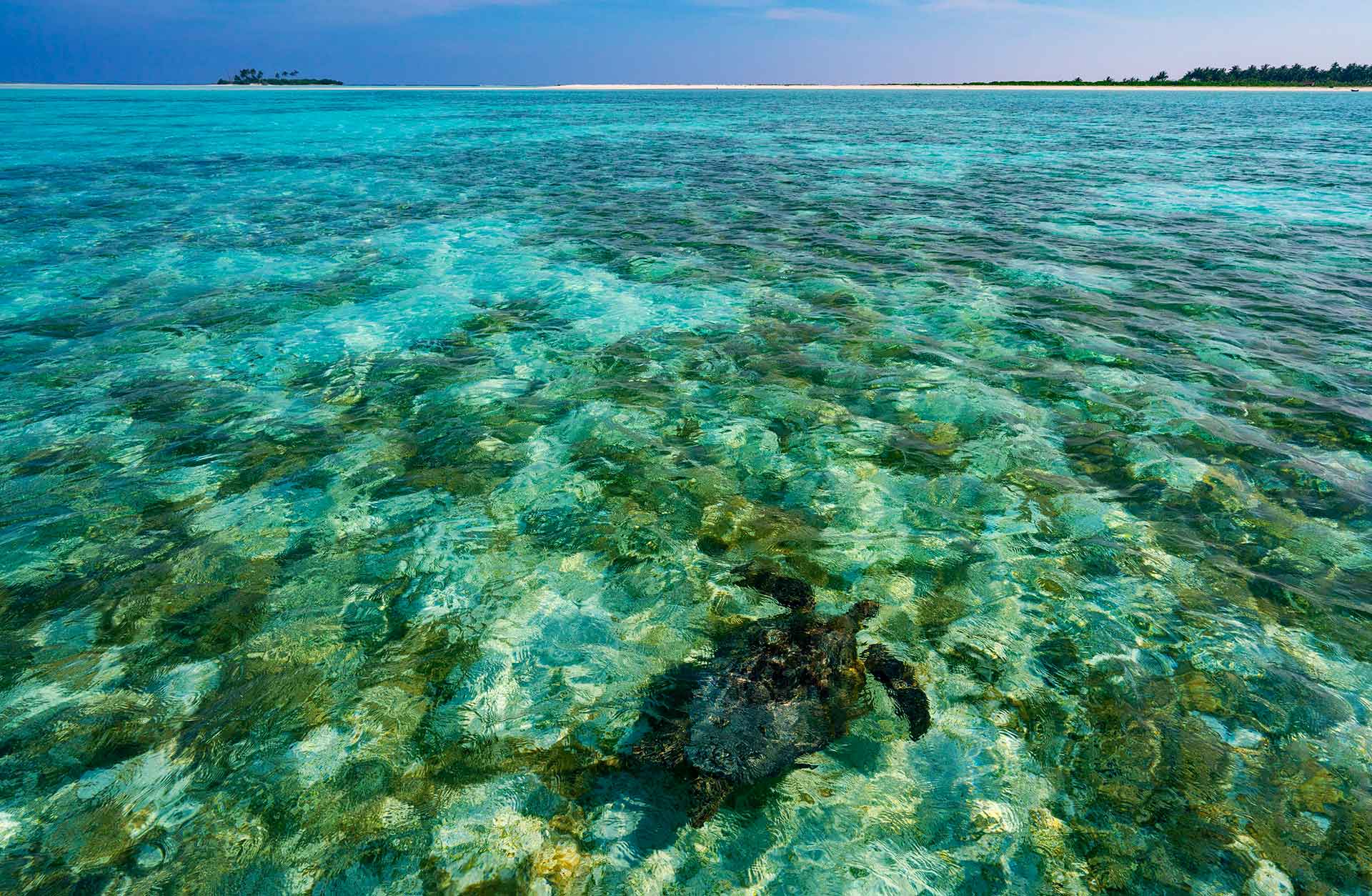 (Left) Green sea turtles mate in shallow waters near the beach where they were born. After mating, the female makes her way to the beach, where she lays a clutch of around 115 eggs. (Right) A green sea turtle swims in the shallow waters around the Lakshadweep Islands. These turtles mostly stay near the coastline and around islands, preferably in areas with seagrass beds. Photos: Dhritiman Mukherjee

Green turtles in Indian waters may migrate there from nearby regions. An individual tagged in the flipper in Karachi, Pakistan, was caught by a fisherman 300 km away in the Gulf of Kutch (Kachch). A satellite-tagged green turtle in Sri Lanka was found to travel all the way to the Lakshadweep Islands. Thus, it is possible that conservation measures instituted at nesting sites in Sri Lanka from the 1990s have resulted in increases in the population in feeding areas like Lakshadweep.

Wearing the heavy shoes of a wildlife manager, bestowed with the responsibility to protect a country’s seagrass habitats, we now face a dilemma. Do we still advocate for the proliferation of the green turtles, given their intense negative impacts from herbivory on seagrass ecosystems? We have to keep in mind that seagrass ecosystems are one of the most productive habitats on Earth that are also declining. They also support myriad marine organisms which use the meadows as foraging, breeding, and nursing habitats.

A voracious herbivore that is vital for a healthy seagrass ecosystem but is capable of completely exterminating extensive seagrass meadows when fear of predation is absent calls for a holistic conservation and management approach. The behavioural and ecological responses of a herbivore released from predation pressures should be accounted for when devising protection measures. Excluding green turtles from certain regions of the meadows, while strengthening measures to revive shark populations could be considered in regions of intensive green turtle herbivory. Exclosure cages that keep turtles out but are large enough for other members of the seagrass communities could be used for this purpose. 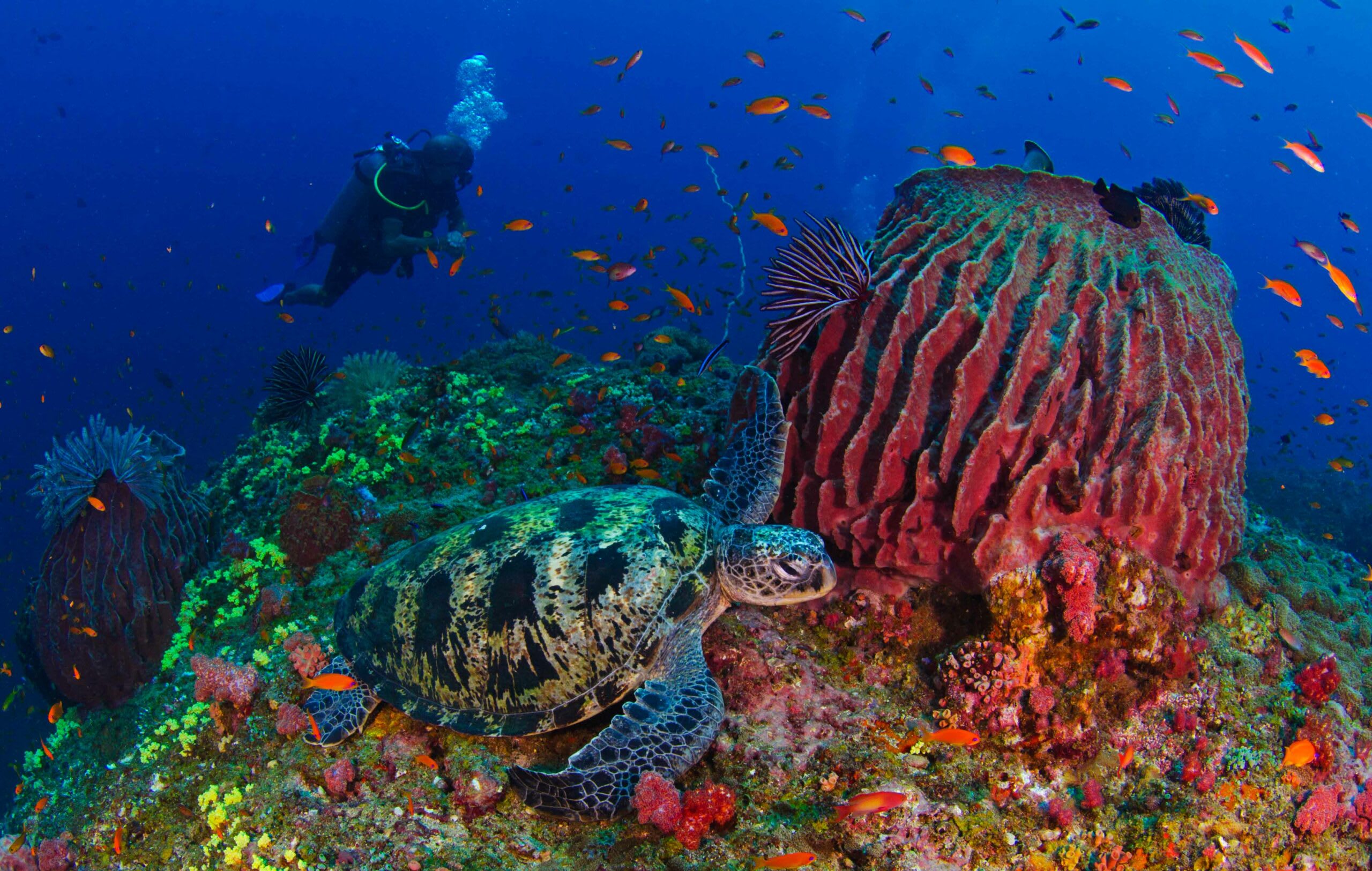 A green sea turtle swims past a reef in the Andaman Islands. Seagrass consumed by the turtle is quickly digested and made available to many species of plants and animals on the reef as recycled nutrients. Photo: Dhritiman Mukherjee

In seas where humans have replaced the role of sharks at the top trophic levels for quite some time, it may be wise to continue to allow a regulated harvest of rebounding green turtle populations. In developing countries, this may well work to meet the nutritional requirements of impoverished communities. It is worth noting here that in countries where green turtles are still legally taken, it is mostly an exemption provided to indigenous and tribal communities for subsistence and cultural reasons. Regulated hunting could be one way forward for both green turtle and seagrass conservation.

For effective conservation measures to become a success, it is crucial to identify which populations are not doing well. The IUCN’s global assessment of this species as a whole ignores context-specific challenges regional populations might be facing. With a range of natural and anthropogenic threats to the survival of this turtle, considering the risks of all populations together will undermine unique issues facing local populations.

We now know that green turtle populations respond positively to protection measures. Considering local risks and incorporating lessons from successful conservation efforts to protect declining regional populations, we can hope that the green turtle may one day not be “endangered” anymore.

This article has been curated in collaboration with the Dakshin Foundation. 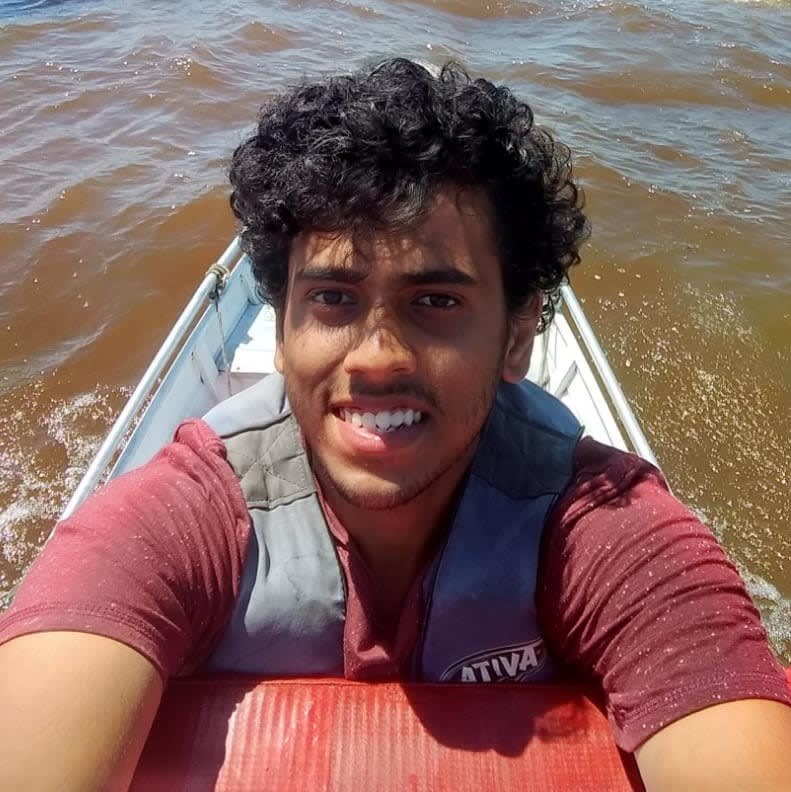 is working with Dakshin Foundation to understand green turtle movements in the Lakshadweep archipelago.