The Guest in My Paddy Field: The Return of the Sarus Crane

The population of the sarus crane has registered a growth in Uttar Pradesh, thanks to the efforts of local communities, state government and non-profit organisations

Basant Singh is a happy man nowadays. He always carries a pair of binoculars with him and never misses an opportunity to spot a Sarus crane (Antigone antigone) idling in his paddy fields. His happiness reaches a new level on spotting a nesting site of the bird on his agricultural lands.

The 65-year-old farmer from Bankati tala village at Maharajganj district, off eastern Uttar Pradesh, connects the presence of Sarus to prosperity.

“I have spent my childhood watching the bird flying and landing in the fields and am emotionally attached to it as it reminds me of my past. Its presence makes me both nostalgic and happy,” says the sexagenarian with almost child-like glee on his face.

Basant, who is also a member of the Sarus Protection Committee (SPC), concedes that the situation was not the same till a few years ago when the Sarus crane, the state bird of Uttar Pradesh and the tallest of flying birds, was fast losing its habitat due to the destruction of nesting sites coupled with the dwindling wetlands.

Basant Singh, a farmer from eastern Uttar Pradesh and a member of the Sarus Protection Committee, looks for Sarus cranes in the fields. Photo: Subrat Kumar Behera

“The bird usually lays its eggs on paddy fields and wetlands. Farmers considered it as an impediment to crops and destroyed the nesting sites. Unfortunately, farmers failed to realise the importance of the bird and focused only on the monetary aspect,” said Basant Singh. “But massive awareness campaigns at the ground level have helped to change the attitude of the people towards the bird,” he added, pointing to a pair of Sarus cranes landing in his field.

Quite true to his words, the population of the Sarus crane, a large non-migratory bird found in parts of the Indian subcontinent, southeast Asia and Australia, has registered a growth in Uttar Pradesh because of the concrete efforts taken by the state government along with the non-profit organisations.

The Sarus crane population in Uttar Pradesh swelled to around 15,938 in 2018 as against 13,332 in 2015, according to the latest data provided by Sarus Protection Society headquartered in Lucknow, the state capital. The society was formed in 2008 by the state government with the core objective of studying the ecology of the species and providing support to activities that would ensure the survival of the Sarus in perpetuity. It conducts a biannual census of Sarus populations.

“Since our inception, we have focused on sensitising people about the importance of the bird by conducting awareness campaigns across the state. We also felicitate farmers who protect the nests in their fields. This has helped in the protection of their nests and resulted in the increase in their population,” said Sanjay Shrivastava, a member of the Sarus Protection Society.

Significantly, the districts of western Uttar Pradesh like Etawah, Mainpuri, Etah and Aligarh have always been considered as strongholds of the bird, with over 73 per cent of the population based here. However, the recent efforts by the administration and non-profits have led to the rise in Sarus numbers even in eastern Uttar Pradesh. 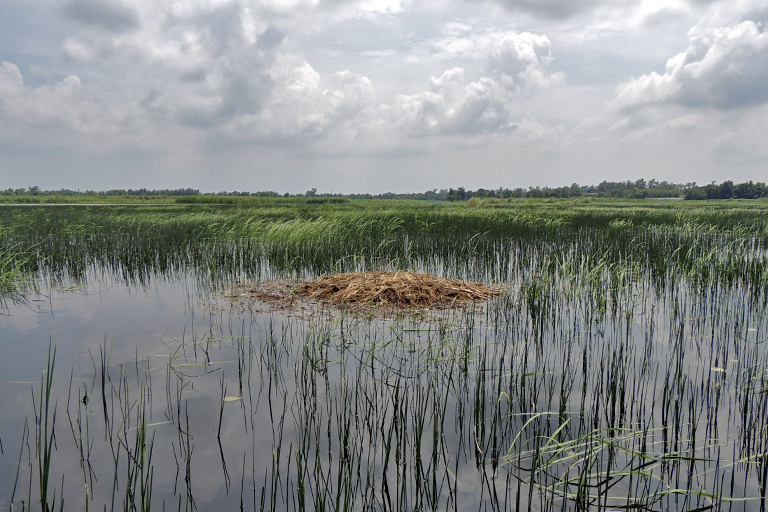 A Sarus crane nest in the middle of a field. A change in the attitude of farmers from destroying nests which hinder farming activities to protecting it has stabilised the population of the bird in many districts of Uttar Pradesh. Photo: Subrat Kumar Behera

Wildlife Trust of India (WTI) is one of the nonprofits that has played a significant role in the protection of the bird that has been classified as vulnerable on the International Union for Conservation of Nature (IUCN) red list.

With support from the Tata Trusts, the WTI has partnered with 26 grassroots-level non-profits and focussed on ten districts of eastern Uttar Pradesh for creating awareness among 14,000 farmers regarding the bird. The ten districts have been identified as Bahraich, Balrampur, Barabanki, Deoria, Faizabad, Kushinagar, Maharajganj, Pratapgarh, Shravasti and Siddharthnagar.

The data provided by WTI of the ten districts shows that the Sarus crane population has increased from 681 in 2013 to 1,653 till March 2018. During the same period, the number of nests protected has risen from 40 to 151.

The formation of Sarus Protection Committees (SPCs) comprising groups of villagers, mostly farmers, enabled WTI to reach its objective since it began work in 2013.

“We decided to have a community-based approach to save the Sarus which is venerated in India and came up with SPCs [model] to protect them. The bird was not hunted, but farmers shooed them away as the nests were built on their paddy fields and that affected farming,” said Samir Kumar Sinha, head of the species recovery division of WTI. “Our aim was to create awareness among them that the Sarus was not harmful to them and in fact acted like their friend by eating insects. During the initial days, we also gave some token money to motivate them in protecting the bird. At present, they are felicitated for saving the nests,” added Sinha. 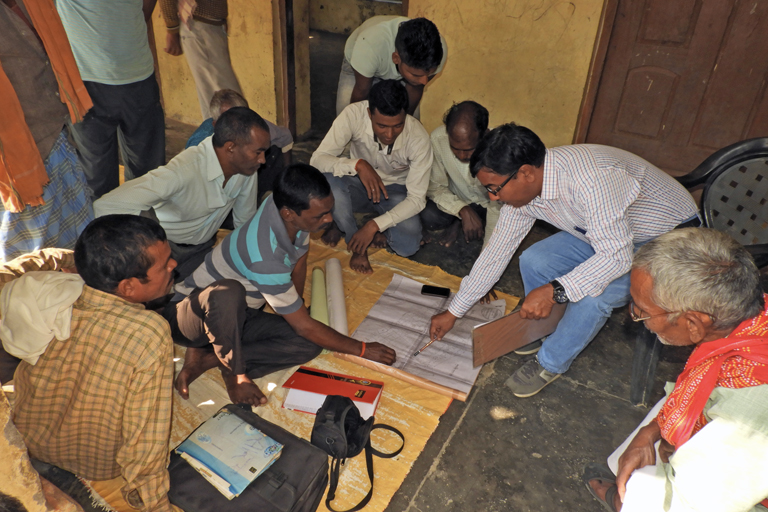 Members of VWMC and SPC mapping and discussing wetlands. Farmers play an active role in the conservation of the vulnerable Sarus crane. Photo: Subrat Kumar Behera.

Despite an increase in its population, changing crop patterns and shrinking wetlands remain significant areas of concern for the survival of the bird.

Farmers in Uttar Pradesh are shifting to sugarcane from paddy because of the higher returns compared to paddy. The state is counted among the largest growers of sugarcane in the country.

In July 2018, the union government increased the Fair and Remunerative Price (FRP) from Rs 255 per quintal to Rs 275 per quintal. With the per quintal production cost of sugarcane at about Rs 155, the FRP translated into a profit that was about one and a half times production cost. The Commission for Agricultural Costs & Prices (CACP) in its latest report noted that sugarcane registered 245 per cent returns over paddy plus wheat and 252 per cent over cotton plus wheat.

The wetlands in Uttar Pradesh like other states are also facing the double whammy of encroachments and land conversions. Sensing trouble, the state government had formed the State Wetland Authority on January 11, 2018 for its conservation.

Bivash Ranjan from the State Wetland Authority said that the government was serious in its efforts to save the wetlands even before the formation of the authority.

“In 2009, the state government had formed district wetland committees with the district magistrate as its chairman. The motive was to identify the wetlands in their respective areas and to protect them. The wetlands were included in the revenue records of the government by 2013. It was done to take stern action against encroachments,” he said. “We have started the process of notification of wetlands and plan to notify around 180 of them by March 2019.”

As per the National Wetland Atlas of India, total estimated wetland area in Uttar Pradesh is around 1.2 million hectare, which is 5.16 per cent of the geographical area of the state. 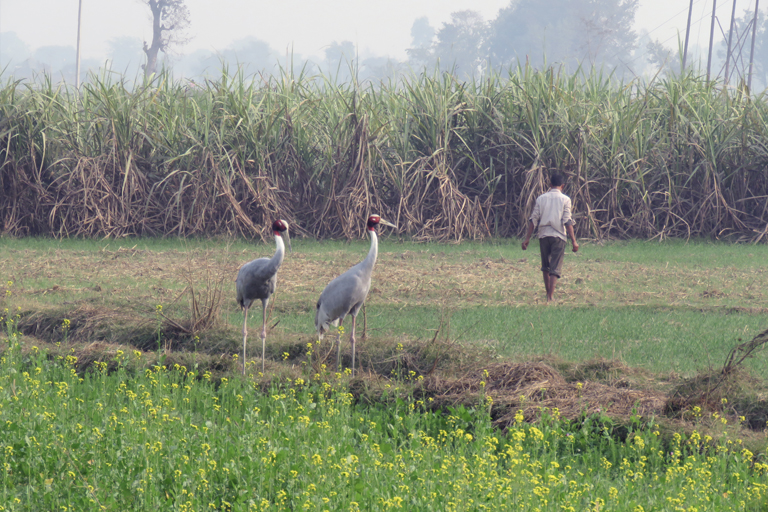 Destruction and conversion of wetlands are one of the main threats to the population of Sarus cranes. Photo: Subrat Kumar Behera

Ranjan claimed that the state has 25,500 wetlands with each having an area of 2.25 hectares or more against 23,580 wetlands till a few years ago. While attributing the increase to the concrete steps by the administration, the senior official conceded that it would be a daunting task to save wetlands because of political influences and change of land character which is dynamic.

The WTI has also formed ten Wetland Management Committees at the village level for protection of wetlands.

“Since land-tenure rights in a majority of these wetlands lies with communities, facilitating their active participation in conservation is one of the important objectives of the project. To achieve this, the project intends to create a network of wetlands to be conserved through a participatory management approach, with locals being the key role players,” said WTI’s Samir Sinha.

Even experts agree that concretisation of farmlands and wetlands are the biggest threat to the bird and result in permanent removal of breeding pairs from the population, but they strictly advise against monetary rewards for saving the bird.

“Western methods such as monetisation should be strictly avoided since these permanently displace local attitudes, and giving money to every farmer forever is totally impractical. We should strive to recognise farmers who allow Sarus to feed and breed in their fields, even though this causes some crop damage,” said KS Gopi Sundar, director of the SarusScape Program of the International Crane Foundation, a non-profit headquartered in the USA that works to conserve cranes and their ecosystems.

He further pointed out that though climate change might impact the breeding of Sarus crane, the more significant threat was the permanent removal of breeding pairs due to land use change. Since past estimates were not robust, it would be difficult to make out if the population is increasing or decreasing, he added.

This apart, extensive use of agro-chemicals, particularly pesticides poses direct and indirect threats to cranes and other avian fauna. Egg stealing or poaching are also significant direct threats to the bird. Eggs of the Sarus crane are used in folk remedies in some parts of India.

Electrocution also remains another danger for the bird as it often loses its life after coming in contact with live overhead wires. According to WTI, eight birds died due to electrocution in ten districts in 2017 as compared to two in 2014.

Farmer Basant Singh concluded that it is essential to conserve the bird as it also finds a place in Hindu mythology. Legends say that the poet Valmiki cursed a hunter for killing a Sarus crane and was then inspired to write the epic Ramayana.

The article was first published in Mongabay India.