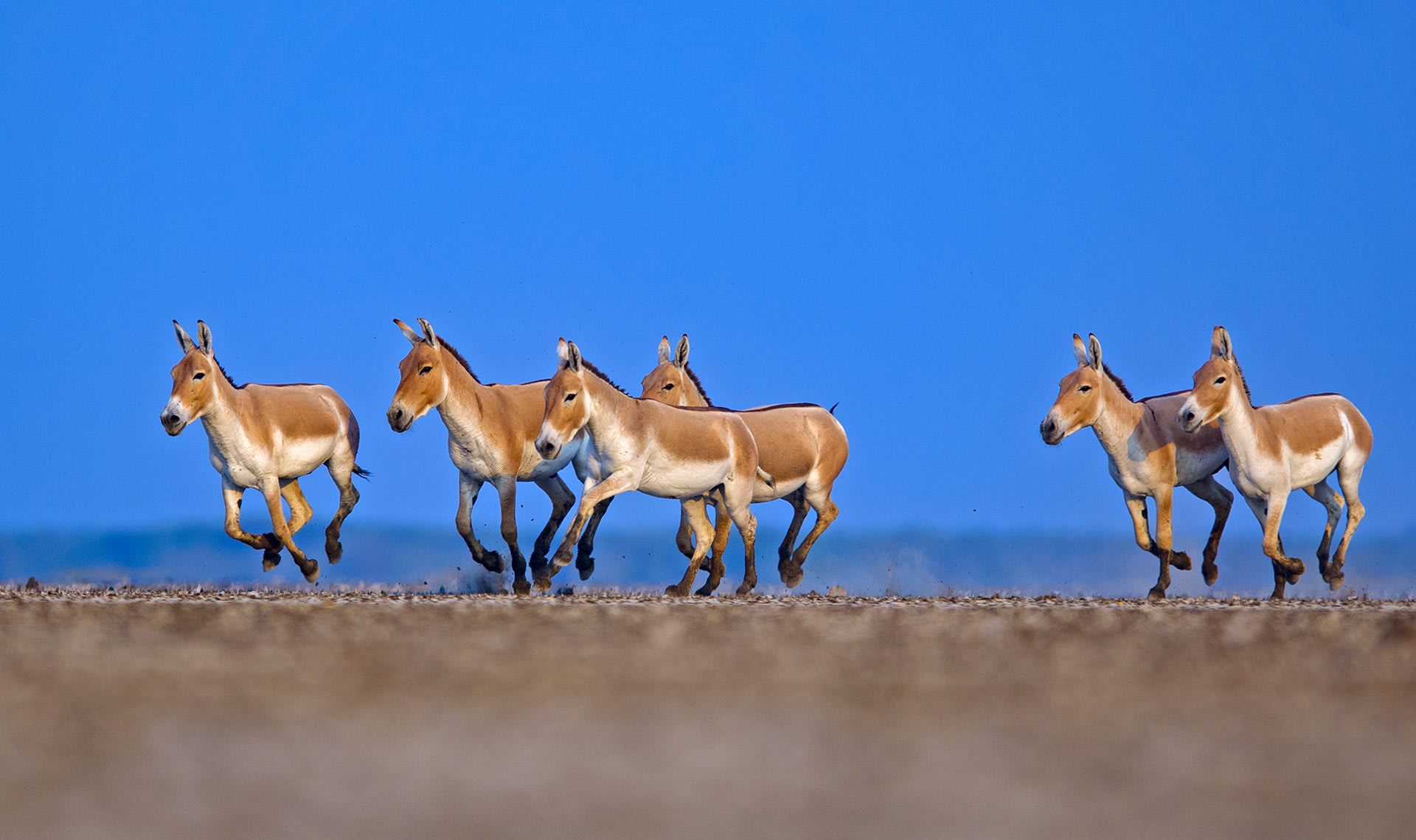 The state of Gujarat is an ecological marvel that houses extremely rare, endemic wildlife like the lions, hyenas, wolves, wild ass and birds like the great Indian bustard and the lesser florican.

Gujarat has vast stretches of grasslands, dry and arid zones, salt marshes and scrub forests, and the longest coastline in peninsular India. It harbours the northernmost tip of the Western Ghats – the Dang forests. Along with Dang and Gir, the Rann of Kutch and Velavadar are few isolated pockets of unique wildlife habitats that require urgent attention.

The salt marshes of Kutch

Only six great Indian bustard females remain in the Kutch region. There is a high chance that the critically endangered species may go locally extinct.

The Asiatic wild ass, onager or the khur is another iconic species, found in the Indian Wild Ass Sanctuary in the Little Rann of Kutch (LRK).

The species is endemic to this region of the world. Its closest relative in India, the kiang or the Tibetan wild ass is found thousands of kilometres away in the high altitudes of Ladakh.

In the past, due to successive outbreaks of diseases like Surra and South African horse sickness, the population of khur dwindled to as low as 700 in the 1960s-70s. This year’s census recorded around 6000 khur, indicating a 30% increase in its population in the past five years.

The increasing numbers is in conflict with the aspirations of the people that live here. Herding communities generally traverse this landscape with their domestic livestock to graze them and the Asiatic wild ass remains highly vulnerable to a disease outbreak. The excess pesticide and fertiliser laden water from farmlands in peripheral villages is often let out into this ‘wasteland,’ which causes artificial flooding and can be detrimental for wildlife that drinks this water.

The proliferation of salt pans and illegal mining is another threat to this region. Development in the form of new roads being built and mushrooming of tourist resorts are providing impetus to wildlife safaris and off-roading in the fragile landscape. Hoards of dumper trucks laden with sand and silt can be seen traversing the LRK regularly.

Furthermore, the introduction of Prosopis julifora in this region has been a bane as the exotic plant species has spread like wildfire to become invasive. It is only a matter of time that these pressures explode to become an irreversible problem for the wildlife of the landscape.

Velavadar – the grassland capital of India

Not far from the LRK, lies an isolated tiny pocket of grassland that is 150 times smaller than the LRK. If a vast landscape like the LRK is witnessing various development, anthropological and ecological pressures, the grasslands of Velavadar is under immense pressure. It lies near the Gulf of Khambhat and was the hunting grounds of the princely state of Bhavnagar, where cheetahs were used to hunt blackbucks.

One of the world’s largest harrier roosts can be found here in the winter, with Montagu’s harrier, Pallid harrier, marsh harrier and hen harrier roosting. Harriers are important for farmers as they are known to consume a large number of locusts.

And how can we forget hyenas, wolves and blackbucks that are the charm of Velavadar?

Most of India’s remaining grasslands are fast depleting due to development projects, and Velavadar is no exception. Anthropogenic pressures from agricultural activities in surrounding villages and flooding due to the proliferation of salt pans nearby pose a great threat to the grasslands and the blackbucks that thrive here. There have been reports of blackbuck deaths due to flooding caused by water blockage due to the salt pans.

Surprisingly, Velavadar has been touted for cheetah reintroduction, completely ignoring that the cheetahs require a vast savannah landscape to thrive. Further, there has been no study to predict the impact on already neglected wolves if cheetahs are brought into this tiny land parcel.

Other wildlife pockets in Gujarat

The Dang forest that forms a part of the Purna wildlife sanctuary is home to the endangered forest owlet. Another section of the forest, the Vansda national park, spread over 24 square kilometers in the southern part of the Dangs, recorded two dholes in camera trap images earlier this year, a feat achieved after 50 years. Hunting, overgrazing, agriculture and habitat destruction continue to be a threat to the northernmost frontier of the Western Ghats.

Above the Dang lies a forest fragment that includes the Shoolpaneshwar, Jambughoda and Ratanmahal wildlife sanctuaries. A bit north of this enclave lies the Mahisagar forest, where a tiger was spotted after 30 years in 2019; but was later found dead. This is a highly fragmented landscape bordering Madhya Pradesh.

In the Gulf of Kutch, the Marine National Park is home to the whale shark, dugong, green sea turtle, olive ridley turtle and leatherback sea turtle. The status of corals and numerous other sea creatures remains deplorable due to the development of industries, oil pipelines, and seaports, further depleting the mangrove cover and causing coastline erosion.

A recent announcement by the state put the Asiatic lion numbers at 674 in 2020, signalling a 29% increase from 2015. The geographical spread of the Asiatic lion has increased to 30,000 square kilometres. It is no secret that more than half of these lions are found outside protected areas. While some have questioned the methods used in the census, a few others are shocked to see the inaction on the death of lions due to diseases. About 92 lions have died since the beginning of this year. The situation for other wildlife is not that encouraging, with a rapid decline in vultures in the state.

Forty three percent of Gujarat’s protected reserves are less than 60 square kilometres and nearly 70% are less than 200 square kilometres in area. Local extinction of a species cannot be ruled out if proper steps are not taken towards the management of the landscapes where these species thrive. Moreover, as far as grasslands and salt flats are treated as wastelands, it will inevitably go into the hands of industrialisation and development.

Gujarat’s denial of the current situation and opposition to translocating a few Asiatic lions to Kuno in Madhya Pradesh is hindering creating a separate safe population for the species to prevent it from epidemics. Its show of strength with rising numbers of lions and khurs may soon be the reason for the decline of these species.

Numbers are important for management, but the rising numbers of a species do not always indicate population health. A holistic approach to wildlife conservation is the need of the hour, with planning at the landscape level.

Tourists at the Little Rann of Kutch. Photo: Kandarp/Shutterstock

People inhabiting these landscapes need to be made aware about the happenings and have to be provided with livelihoods that are not competing with nature but assimilating with it.

Gujarat must also plan to establish viable wildlife populations elsewhere in the wild, inside the historical range of the species. This would release pressures from isolated populations, perhaps taking lessons from the successful reintroduction programs of the one-horned rhino the swamp deer (barasingha).

Moreover, it needs a state forest policy that integrates grasslands and salt marshes as separate wildlife habitat where plantations shouldn’t be allowed. If these isolated patches and wildlife populations are not conserved, Gujarat will lose its natural heritage, pride, and identity.