State forest departments of Odisha and Chattisgarh are working with local communities to mitigate conflict by using seed balls, drones and alarm machines 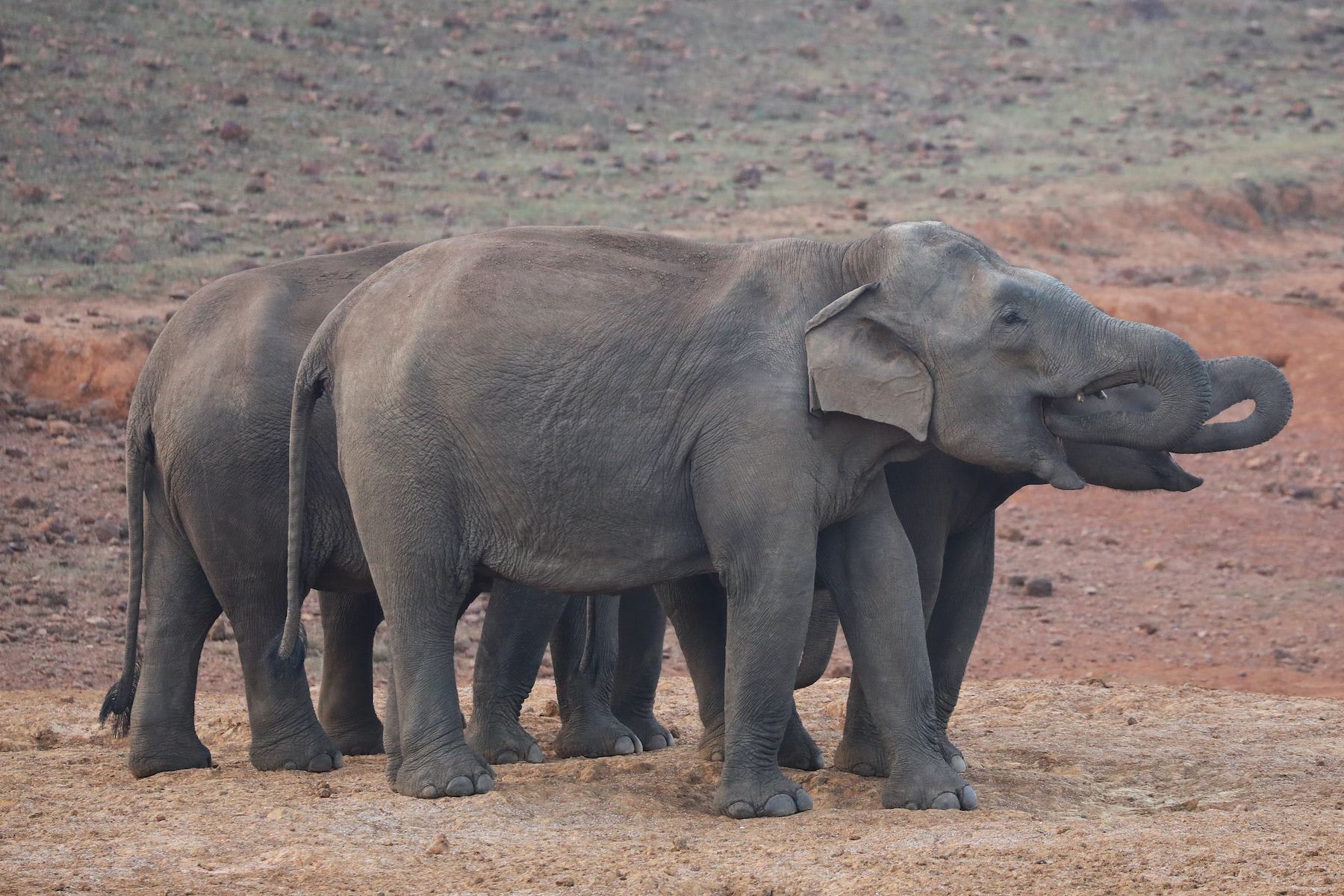 Badrinath Das lives in Bentapada village in the Athgarh Forest Division in Odisha. His community has in the past witnessed several instances where elephants have come into their paddy fields and raided the crops. The repeated destruction of their fields has now led them to experiment with a technique of using ‘seed balls’ that could perhaps reduce such interactions with elephants in the future.

Das is a member of the Bentapada Van Surakshya Samitee (VSS), a Joint Forest Management Committee (JFMC). State forest departments support local forest dwelling and forest fringe communities to protect and manage forests and share the costs and benefits from the forests with them through a JFMC; the approach was introduced by the Indian government through the National Forest Policy of 1988.

Last year, with the intervention of the local forest department, Das and around 25 community members chipped in to experiment with the production of seed balls of bamboo plants to deal with the challenge. The forest department had been experiment with bamboo seed balls and informed that this method could help in increasing the food reserve for elephants in the forest, which in turn would restrict their movement and they wouldn’t need to come to the fields in search of food. The department has provided the seeds of Dendrocalamus genus of bamboo plants (Salia) and imparted some training to the volunteers of the villages.

The experiment that started during last year’s monsoon season is still on; and buoyed by its success, the department has scaled up the initiative this year.

“We get the seeds from the forest department. We keep the seeds in warm water. We then mix it with clay, cow dung, and insecticide and fashion them into balls. In areas where we cannot go, we throw the seeds there to boost plantation. We have seen the growth of several bamboo plants outside our village after this experiment,” Das said.

Athgarh division is prone to human-elephant conflicts. “This year we are covering all the villages close to the 38 reserve forest areas. This is a simple technology. We distribute seeds free and the affected community members make seed balls out of this. Around 60 percent of seed balls germinated into shoots. We have found that the bamboo species and its shoots are much sought after by the elephants,” Sasmita Lenka, Divisional Forest Officer (DFO) Athagarh said.

Lenka said that the first level of success is that more than half of the seed balls germinate into plants and added that the results of the experiment in mitigating human-elephant conflicts could become more visible in the next five years but she is hopeful of good outcomes.

Odisha is trying out different approaches to mitigate human-elephant conflicts and so is its neighboring state-Chhattisgarh. Radio collaring of animals and app-based tracking and alert systems are in place, although experts are skeptical.

Odisha, with Jharkhand, Chhattisgarh, and part of southern West Bengal forms the central Indian elephant habitat at times extending to Madhya Pradesh and Bihar. This landscape is spread over an area of 21,000 sq km and supports 3128 elephants. The central Indian habitat is the most fragmented and degraded elephant habitat in the country due to encroachment, shifting cultivation, and mining states the Right of Passage report.

Human-elephant conflict is very high in the central Indian landscape and although the area supports less than 10 percent of the elephant population of the country, it accounts for almost 45 percent of all human deaths due to interactions with elephants in India. According to the 2017 elephant census, Odisha has a total of 1976 elephants in the state while Chhattisgarh has a total of 247 elephants. In the East Central Region, Odisha has the highest number of elephants. Odisha and Chattisgarh alone are home to 2223 jumbos (71 percent) out of the total 3128 jumbos the entire eastern region has.

According to written data given by the Environment Ministry in Lok Sabha, in 2017-18 Odisha reported the highest human deaths caused by elephants in the country while in 2018-19 it reported the third-highest death toll. Chattisgarh was fourth in 2018-19 human death tolls from elephants. Assam and Jharkhand were among the top.

The Chhattisgarh government has also experimented with the idea of seed balls but it is not targeted towards elephants alone. “We are also using seed balls but to enrich the forests. We are using fruit and plant-bearing seed balls that help in habitat enrichment of the jungles that help all animals,” P.V. Narasingha Rao, Chhattisgarh Principal Chief Conservator of Forests (Wildlife) told Mongabay-India.

However, the Chhattisgarh government’s prevention and mitigation repertoire also features the use of integrated mobile applications and elephant movement warning systems in selected forest divisions and in villages that are most vulnerable to human-elephant conflicts.

For instance, as many as 10 villages in the Jashpur forest division, along the Odisha-Chhattisgarh border have fixed siren systems. These villages are most prone to elephant raids. These siren systems are connected with the Sajag app that tracks the movement of elephants. “If the jumbos are within a radius of two km, the sirens are blown, alerting the villagers to take timely action,” Jashpur DFO Srikrishna Jadav said.

The siren system will apply to Mahasamund, Jashpur, Sarguja, Raigarh, and Dharmagarh Forest Divisions in Chhattisgarh; several have started setting it up. Jadav explained that elephants usually do not directly harm humans; they often destroy paddy or sugarcane crops but if agricultural produce is placed within the vicinity of houses, the elephants target them, endangering local communities in the process. In Raigarh forest division, another human-elephant conflict hotspot, the department has roped in individuals to be ‘trackers’ to keep a vigil on elephant movement and inform the local Forest Range Officer for required action, said Raigarh DFO Manoj Pandey.

Both the states are now in their nascent stages of radio-collaring of elephants, though the plan has now expanded.

H.S. Upadhaya, PCCF (Wildlife), Odisha government said that it has already started using drones to track the movement of elephants but for a better technology it has tied up with the Indian Institute of Technology (IIT), Bhubaneswar. “We started drone surveillance in selected areas in the state but we have collaborated and funded IIT-Bhubaneswar to make the technology more robust. The team is now researching a better surveillance system. We also started solar fencing of reserved forest areas and started SMS-based alert warning systems for the villagers of Angul division. We are expanding the SMS alert in some other areas too,” he said.

Like Chhattisgarh, the Odisha government has also come up with a mobile app called ‘Anukampa’ but it is meant to report human and animal casualties and receive timely compensation from the government.

However, both the states are yet to notify elephant corridors. The Odisha government has proposed the corridors before the National Green Tribunal (NGT) in a case but is yet to notify it.

Sankar Prasad Pani, a lawyer with the National Green Tribunal (NGT) said that notification of elephant corridors can provide legal recognition to the areas akin to protected areas such as a sanctuary, reserve forest, tiger reserve, and eco-sensitive zones. This, he said, can prevent mining industries from encroaching on corridors and reduce conflict.

“As of now the same do not have any legal binding, hence projects through the corridor can be approved and the projects can hardly be challenged in a court of law as there is nothing illegal in diverting elephant corridors in absence of specific statutory notification to that effect,” he said.

Odisha has, meanwhile, demanded expansion of two out of three elephant reserves – Mahanadi Elephant Reserve and Sambalpur Elephant Reserve – as per the recommendations of the Asian Nature Conservation Foundation (ANCF), Bengaluru to better protect its elephants.

Biswajit Mohanty, a wildlife expert and environmentalist from Odisha, had filed a case of elephant corridor notification before the NGT and said that the government has spent significant money on sponsoring studies but failed in implementing their suggestions.

“The state has commissioned several studies and formed several expert committees to recommend ways to save elephants and reduce their conflict with humans. The first such commission was formed in 1991. They are not even implementing study recommendations that were given 20 years ago. They are more into studies but fail to implement their recommendations,” he said. He also criticised the government over using barbed wire fences, declaring most elephant deaths due to diseases, and failing to notify elephant corridors.

Similarly, Raigarh-based environmentalist Ramesh Agarwal from Chhattisgarh also said that the results of government initiatives hardly have yielded good results in the state. “This is true that funds are being allocated and spent in works like watchtowers, check dams, etc for elephant tracking and to reduce conflicts. However, hardly we see the results on the ground. We hear of elephant-human conflicts in Sarguja, Korba, Raigarh quite often. Many villagers complain of their standing crops being destroyed,” he said. He also questioned the huge amounts spent on these works which could have been done at lower costs as per his assessment. He said that the local forest department when asked by him through RTI to give data on the location of check dams and money spent on them, often tried to shield data citing reasons.