The once abundant “tiger of the Cauvery” has now shrunk to a few small pockets in the Cauvery basin. Protecting this fish is not just about the mahseer, it’s linked to the conservation of the larger riverine ecosystem 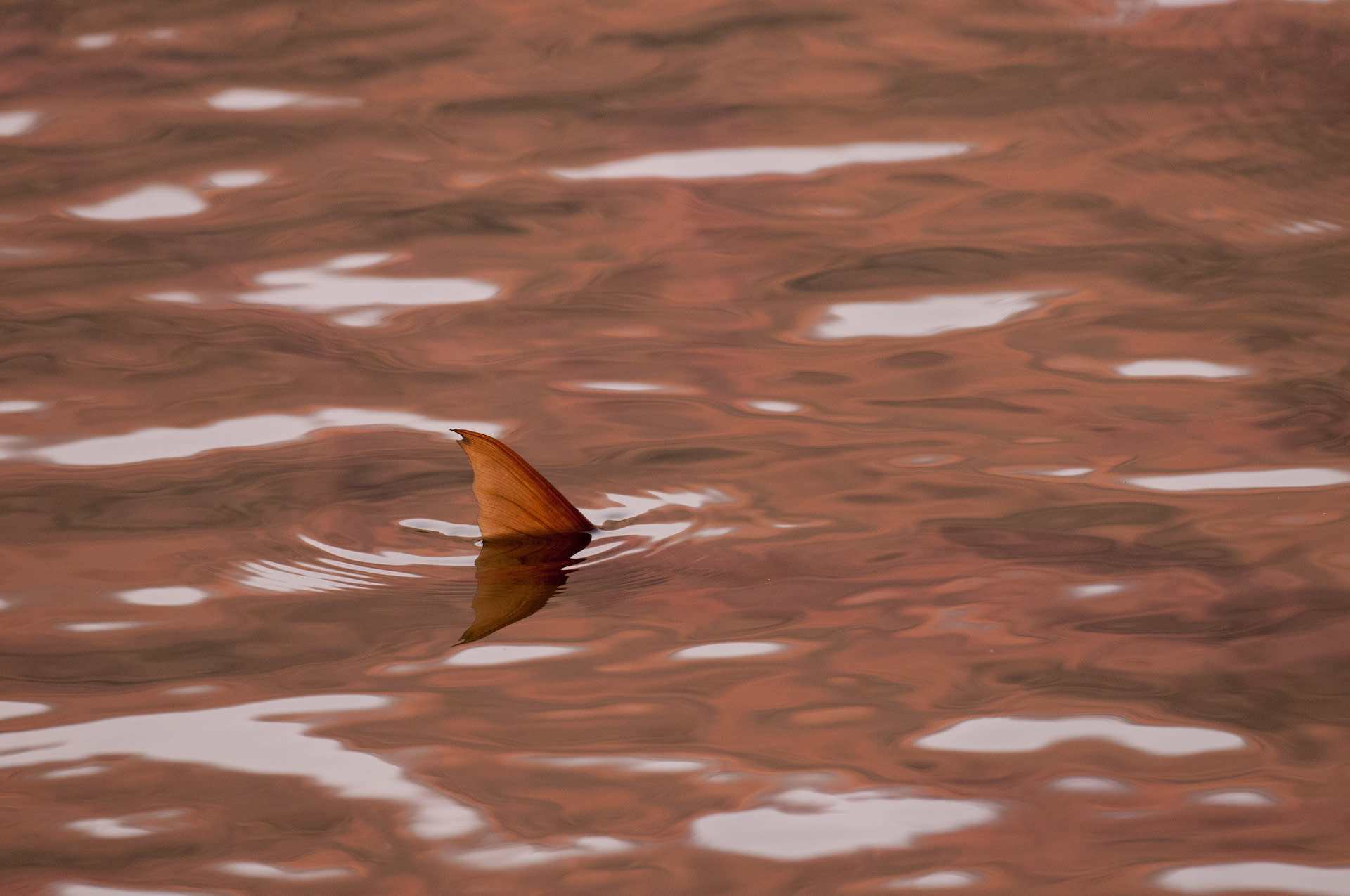 In 1870, G.P. Sanderson, a British naturalist from Mysore caught a massive fish in the Kabini River in Karnataka. He was ecstatic about how much it weighed. He suspected it to be close to 60 kg, and as he noted in his personal records, weighed almost as much as a “fully grown man”.

The huge fish in question was the humpback mahseer (Tor remadevii, also orange-finned mahseer, from the family Cyprinidae) found only in the Cauvery and its tributaries. As the word spread, seasoned anglers from many different countries travelled to the river for an encounter with the humungous fish.

Over 150 years later, this story is still well-known among anglers and fishing enthusiasts in south India. After all, the Cauvery and her tributaries were home to this mysterious charismatic giant carp and drew anglers to Karnataka from around the world. They call it “the tiger of the Cauvery” because of the fierce fight that it puts up as well as for the important role it plays as an ambassador species for river conservation.

Evolution in the Cauvery River Basin
Although only one per cent of all Earth’s water is freshwater, nearly half of the 30,000 known species of fish live in it. As landscapes changed over millions of years — mountains formed, rivers changed courses, and lakes filled up — fishes evolved in little pockets of rivers, streams, and lakes.

Through millennia, the humpback mahseer, one of the world’s largest and most iconic freshwater fish, flourished in the Cauvery and its tributaries (Harangi, Shimsha, Kabini, Moyar, Bhavani, Pambar, Amaravati, Arkavati) and in the Kodagu district’s bigger streams. These waters have historically provided the ideal habitat for humpbacks because of their perfect flow regimes for spawning, deep pools, fruit trees along the banks, loose sand at the bottom, and rocks interrupting the flow. Humpback mahseers evolved to thrive in all the different parts of the unique and diverse habitats of these rivers and became part of their complex ecosystem. 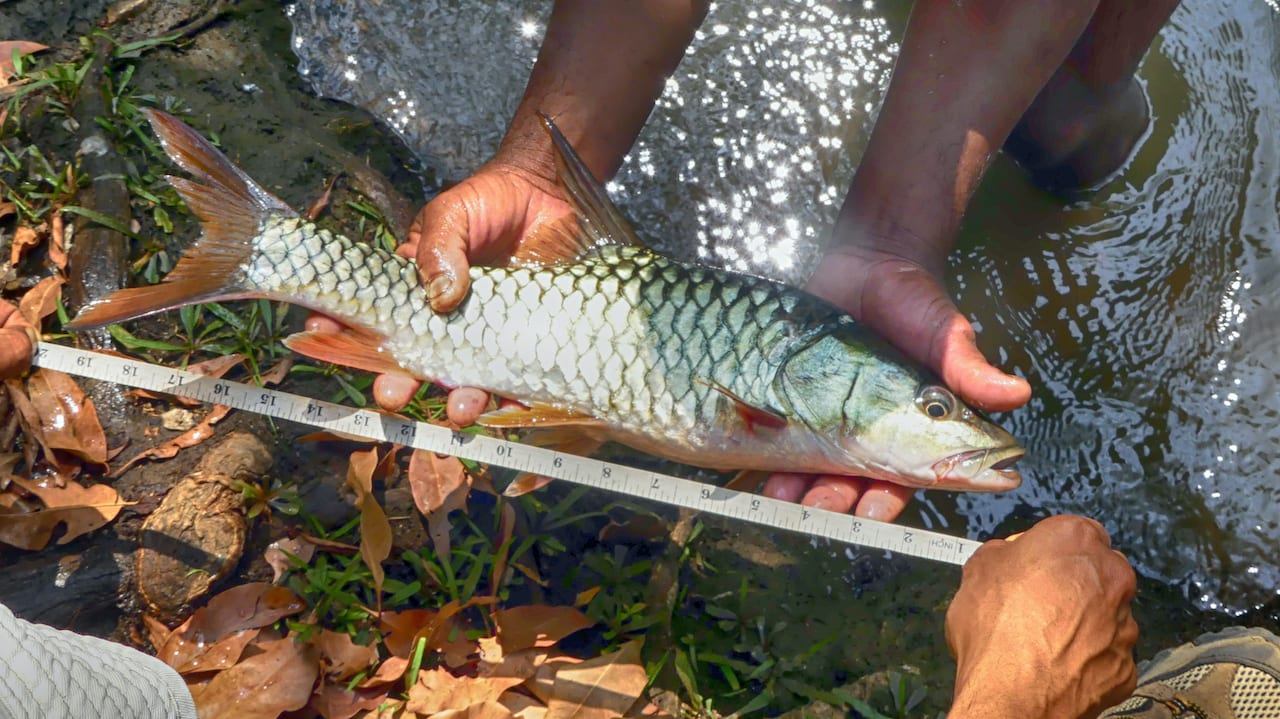 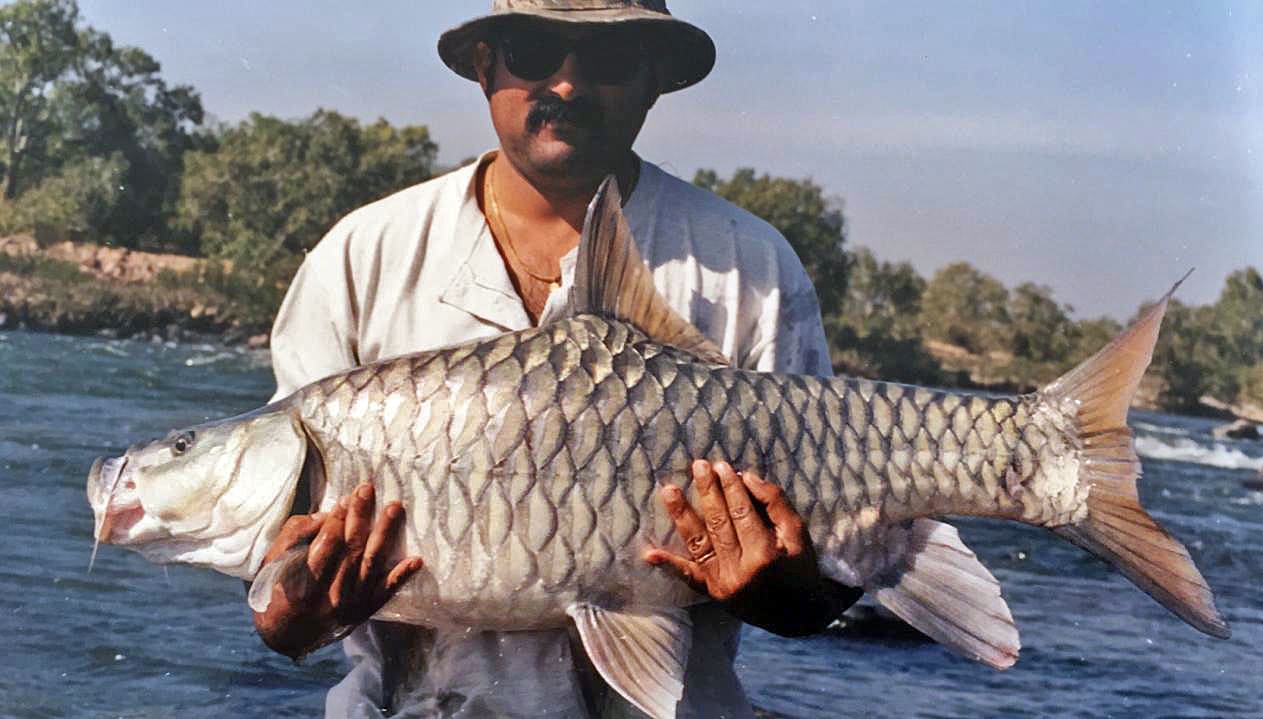 (Left) A humpback mahseer that was caught and released during a survey. It is listed among the world’s 20 largest freshwater fish and can grow up to 1.5 m in length. (Right) The fish is popular among anglers because of its size and strength. In the late 1990s angler Nakul Shetty caught a humpback mahseer in what is now the protected Cauvery Wildlife Sanctuary. Photos: AJTJ_P1010743-A. J. T. Johnsingh, WWF-India and NCF, CC BY-SA 4.0 (left), Nakul Shetty (right)

Angling Records and Local Fishing Knowledge
“All that we know about the humpback mahseer before scientific research began in 2014, comes from anglers’ records and traditional knowledge of local fishers,” says conservation biologist Naren Sreenivasan. He works with Wildlife Association of South India (WASI), an organisation that has been engaged in mahseer conservation in the Cauvery since the 1970s.

British-era anglers came to the Cauvery and found their favourite spots fishing for the river’s living legend. They were taken in by the humpback’s allure — its sheer strength, the size of its large scales, and its huge mouth. After Sanderson, some of the most well-known anglers of the early 20th century were the Van Ingens, taxidermists from Mysore, and the Maharajah of Mysore. Anglers like them, and many others that came in the decades after, maintained meticulous records of every fish they caught — the weight, size, details of scales, colours, exact location, date and time caught, weather, season, bait used, and everything else around the catch. For generations, local fishing communities too had studied the behaviour of the fish they encountered. They knew where the giant humpbacks swam, what fruit they ate in which season, where they spawned, how to trick them into accepting their bait, and more. “Anglers depend on the fishers for information about the fish. If you want to know what to use to catch a fish, you first ask the locals what bait they would use. They know when to wait for them upstream at Bheemeshwari as opposed to downstream in Galibore,” says Sreenivasan.

Data from anglers and local communities has allowed researchers to learn much about the humpback mahseer. They have, for instance, found that humpbacks don’t have a strict or specific diet and that it possibly changes according to the season. “There are changes over the years and places. In Kodagu, the humpback eats the seasonal wild mangoes or riverine jamuns that fall into the water from the trees along the banks, whereas in fast waters where fruiting trees are fewer, they tend to feed more on smaller fish, crabs, and molluscs,” says Sreenivasan.

Thanks to the diligent records of generations of anglers and the local knowledge of fisherfolk, we know which rivers and areas the humpbacks once ruled. Unfortunately, they are now locally extinct in most of those places. The once-abundant humpback is today restricted to a handful of breeding populations located deep inside protected areas. In fact, the largest population is in the Cauvery Wildlife Sanctuary just below “Headworks,” a large weir built across the Cauvery to divert nearly 900 million litres of water to Bengaluru city every day.

The humpback mahseer was earlier confused with the golden mahseer (Tor putitora) found in Himalayan rivers and streams. This is an image of a preserved specimen of the humpback which has been given the scientific name (Tor remadevii) in June 2018, after much research and debate. Photo: Pinder et. al, CC BY 4.0

Dams, Dynamite, and Destruction
On its banks, the Cauvery has historically fostered kingdoms, human settlements, and cities. Along its course, it now has many dams, big and small. Srirangapatna, which was a favourite among anglers in the early 20th century, lost all its large mahseers soon after the Krishna Raja Sagara Dam was built in 1924. When the Kabini Reservoir was built in 1974, the humpback population downstream from it went extinct. “Humpbacks can’t survive in a homogenous habitat, like lakes and fragmented rivers. They’ll live, but they won’t breed successfully,” says Sreenivasan.

According to Sreenivasan, telemetry studies from Bhutan show that (related) mahseers can migrate over 100 km in the monsoon. They show homing instinct. Year after year, they spawn in specific shallow areas in the headwaters (close to the source) and then return to the safety of the main river. If a dam is constructed in the middle, there is zero connectivity for them, threatening their existence. Additionally, there are many hatchling predators in the main rivers.

However, even when mahseer find ways to their dedicated spots, they need to be on perpetual lookout. Dynamite fishing, despite being illegal, plagues these rivers. Even if the humpback mahseer is not the direct target, underwater explosions can gravely injure the big fish, who may survive for a few hours or days, but eventually succumb to injuries.

Dams on the Cauvery river are one of the direct causes of the reduction in humpback mahseer populations. In 2018, the International Union for Conservation of Nature (IUCN) declared the fish “Critically Endangered”. Photo: Ashwin Kumar, CC BY-SA 2.0

Addressing the river’s ecological issues benefits mahseer and conversely talking about them can also protect riverine ecosystems. “We overuse these rivers and pollute them. To save the fish, we cannot neglect the critical pollution levels in the Arkavati River (a tributary of the Cauvery). To save the humpback mahseer we need to change the way we treat our waste and use our rivers,” says Sreenivasan.

This unique species of mahseer that once thrived in the waters of the Cauvery is now critically endangered according to the IUCN Red List of 2018. But much like the tiger serves as a symbol for the conservation of entire sanctuaries, the tiger of the Cauvery too can help protect the entire river ecosystem. 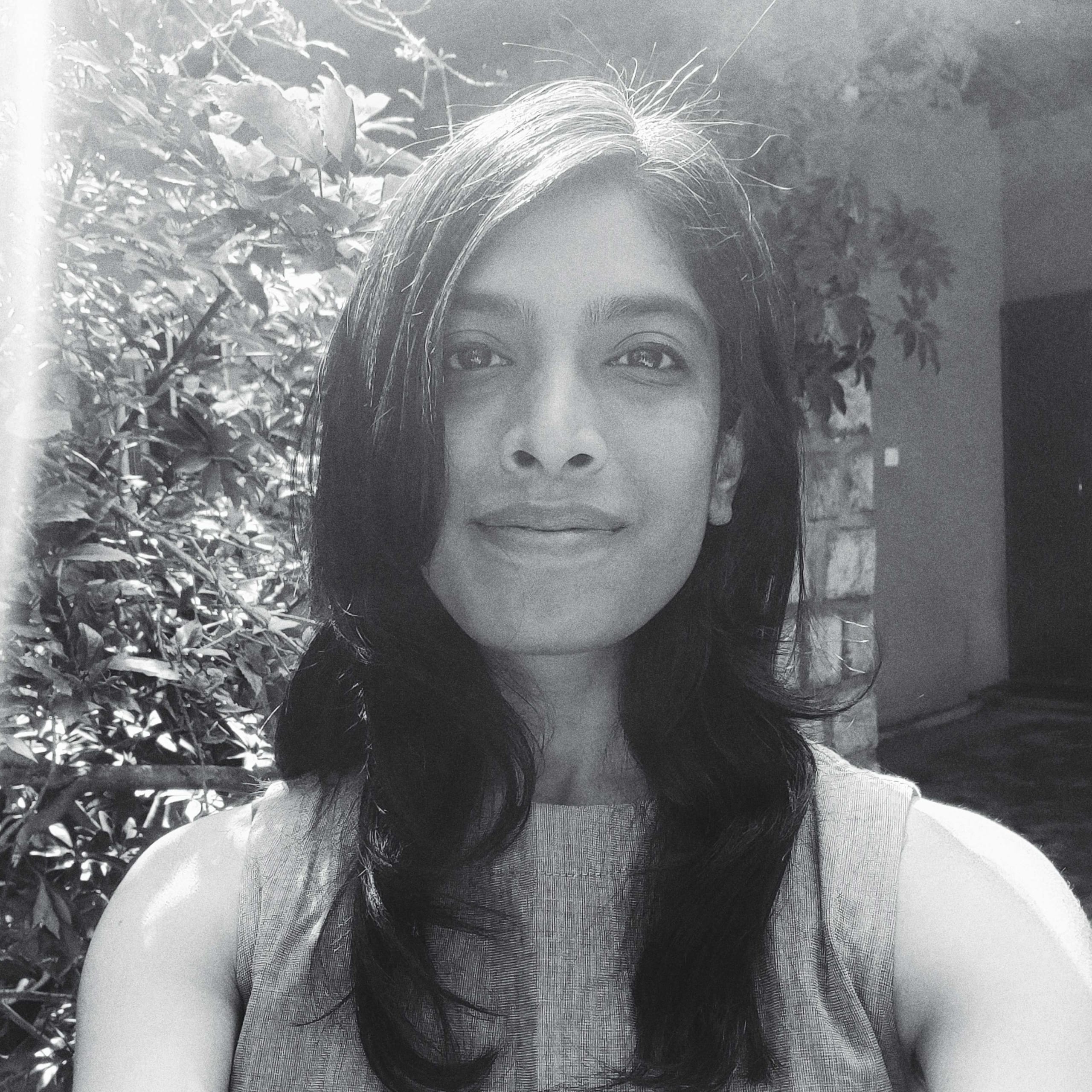 believes it's just as important to crouch down to witness a beetle's morning as it is to gasp at the immensity of mountains. And tells anyone who listens about it.

Going to the Dogs? Turning the Page for India’s Endangered Dhole