Indian grey wolves have a long history of living in human-dominated landscapes, but their survival is now challenged by the rapid, unsustainable change taking place in these traditional habitats 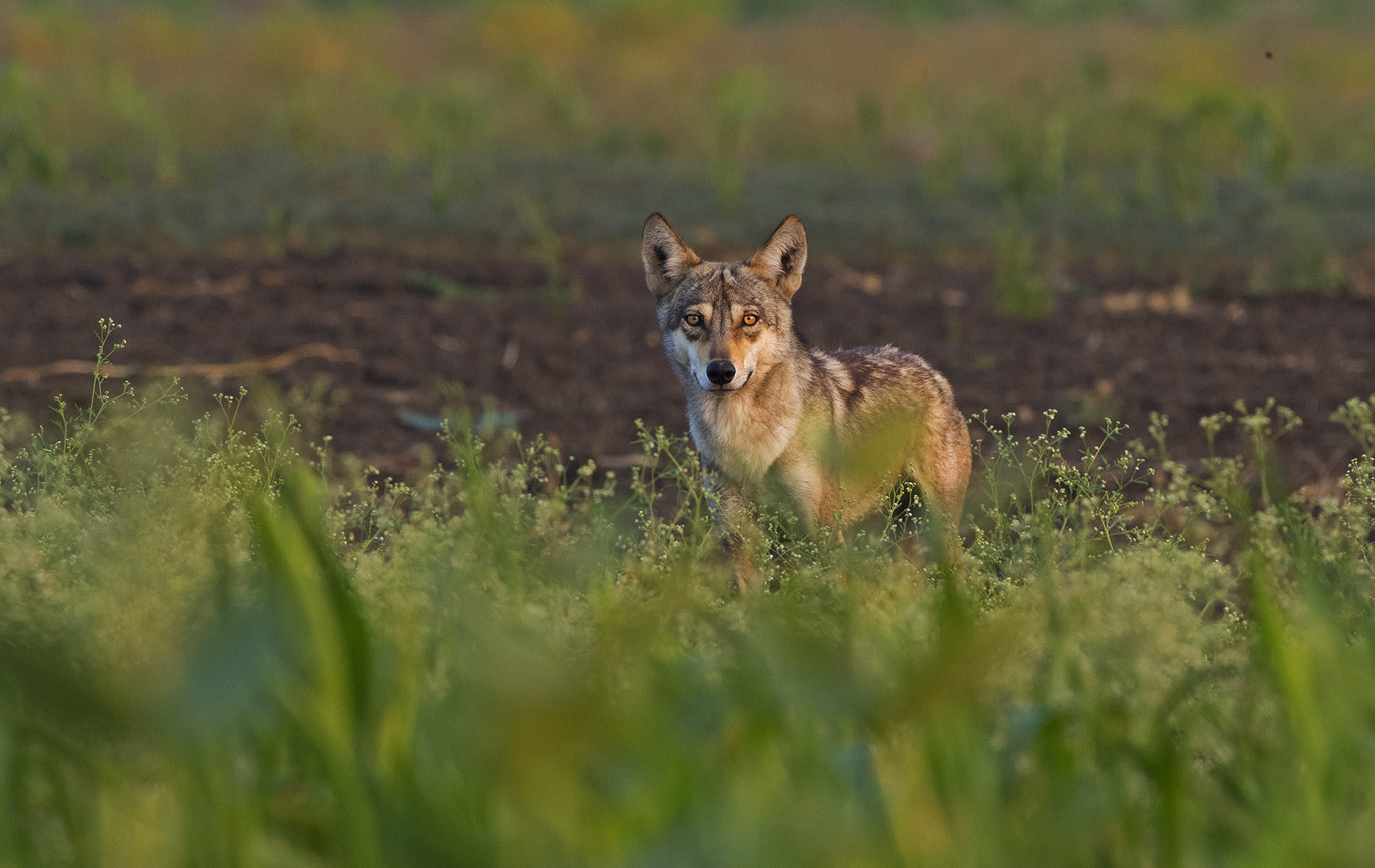 We were standing in extensive jowar fields in north Karnataka around noon. In the sweltering heat of March, our vision blurred, and trees and vehicles seemed to melt away. It was hard to see very far but we had spotted a pair of Indian grey wolves (Canis lupus pallipes, also called Indian wolves) walking one behind the other on a bund about 400 metres away. In some sense, it was the most ordinary wildlife sighting. Neither were there any “wildlands” around, nor was this carnivore in action chasing prey or howling against the moon. The two animals looked very scrawny and could have easily been mistaken for two large free-ranging stray dogs. We could see a few vehicles and a windmill behind them in the distance. For me, it was thrilling to see wolves for the first time. The typical wolf trot we could see differentiates these wolves from other wild canids. The pair took a few pauses to look around and cool themselves. The vehicles behind them appeared to be totally oblivious to the fact that two wolves were right there on the bund. Only over the next year did I realise that what I had seen — the windmill, vehicles, and agricultural fields — was typical of the land that Indian grey wolves currently occupy. We had very much spotted the predator in its habitat. 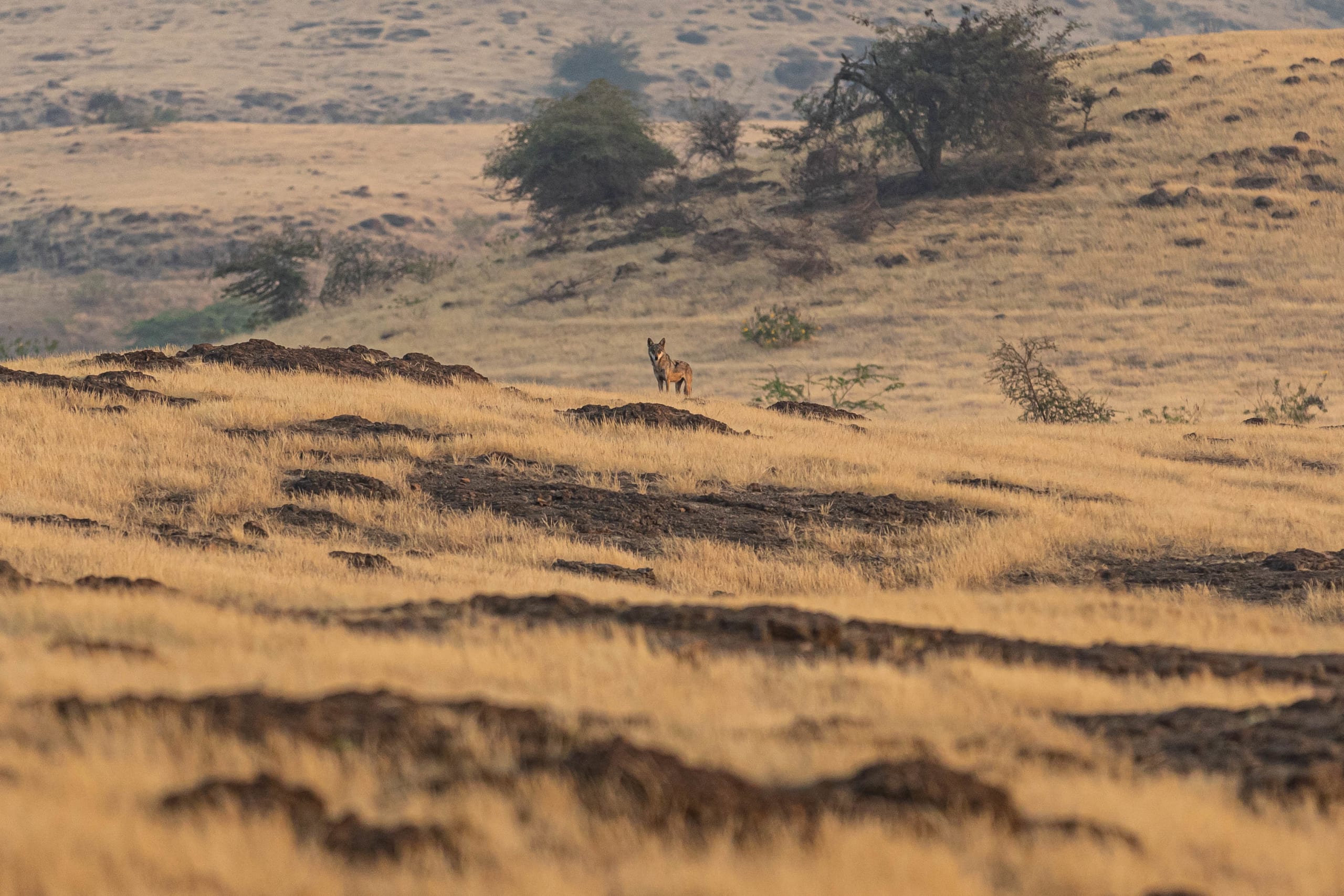 (Top) Open grasslands of the Deccan Plateau (seen here), as well as thorn forests, and scrublands provide suitable habitats for the Indian grey wolf. (Above) Indian wolves live in small packs and occasionally pair up to take down large prey. Photos: Akshay Manwani (top), Partha Pratim Kundu (above)
Cover photo: The Indian grey wolf is a subspecies of the grey wolf found in the Indian subcontinent and some countries in southwest Asia. Unlike other species of wolves from cold regions, it has short, thin fur, an adaptation that helps it thrive in its warm habitats. Cover photo: Dhritiman Mukherjee

For most people from cities, the thought of wolves elicits images of nocturnal creatures from cold regions with furry grey coats, living in packs, and hunting strategically. We tend to think of wolves as residents of forests and wildernesses in North America and Europe. Few know that wolves not only exist in India (just 50 km outside some cities!), but that their story is different from wolves in other parts of the world. Although they live in packs, Indian grey wolves are not forest dwelling animals nor are they very large and furry. They are likely to be in the tree-less, dry grassy plains and hills that we casually pass by in the countryside, sometimes even dismissing them as “barren and degraded”. This is the habitat they share with livestock, people, and other unique wildlife like the great Indian bustard, the blackbuck, and even the star tortoise.

The Indian grey wolf is a smaller-sized subspecies of the Holarctic grey wolf and has existed on Earth for about 1-2 million years. Although its genetic uniqueness is a matter of debate, it is not endemic to India and is found in some southwest Asian countries. It has evolved to survive in dry savanna habitats which are open or sparsely forested but may also occupy dry forests. In peninsular India, a wolf pack may need anywhere between 50-250 sq km to find prey, raise pups, and have access to sufficient cover. The Indian gazelle or chinkara, the blackbuck, wild pig and black-naped hare are some of its important wild prey. Occasionally, wolves can be avid fruit eaters feeding on Zizyphus berries, grapes, and even watermelon (as seen in north Karnataka). But what brings this animal into close interaction with people is its dependence on sheep and goats for food. Livestock is an important part of the wolf’s diet historically and this is partly the reason for the notoriety they have earned in popular culture. 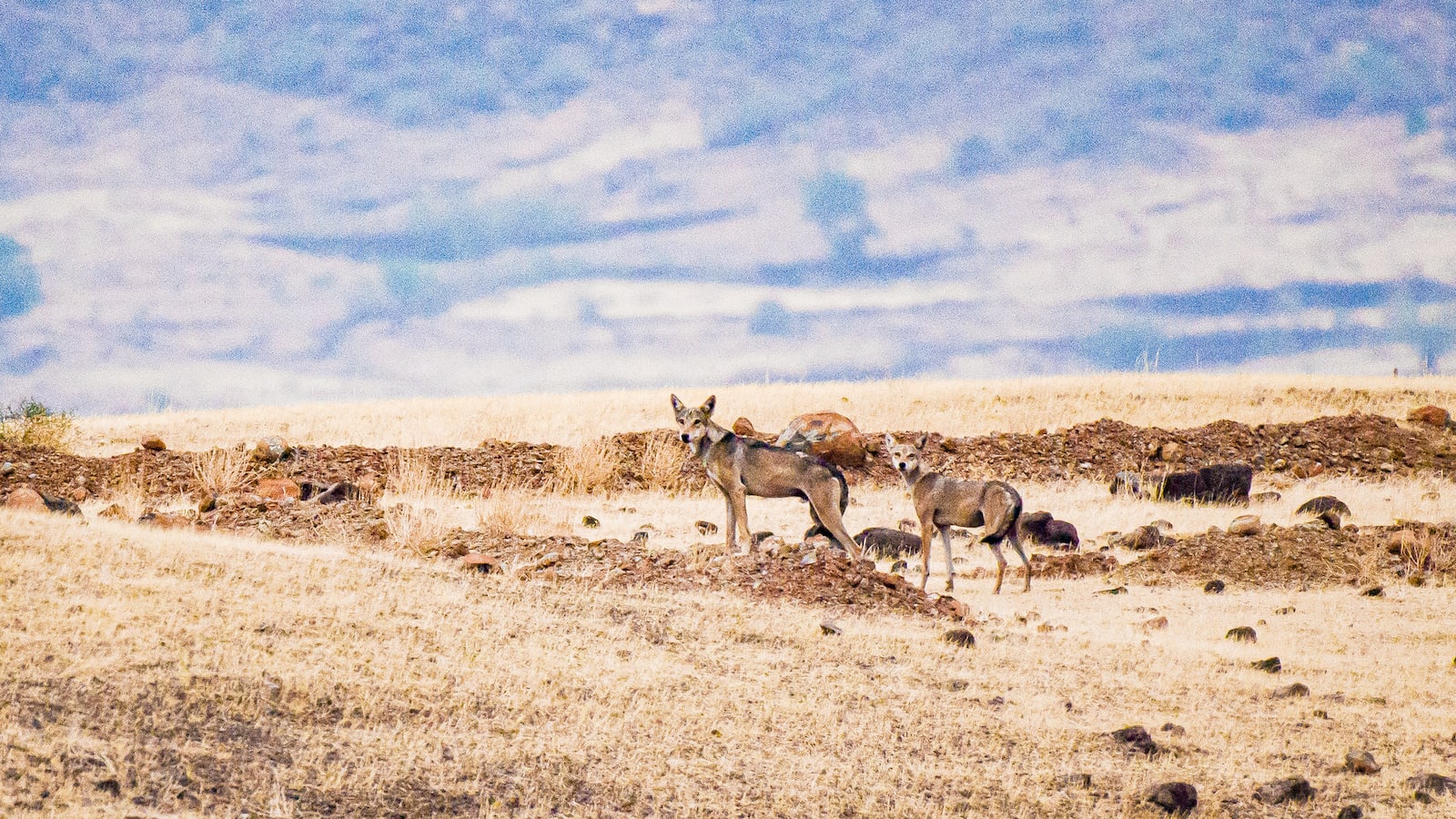 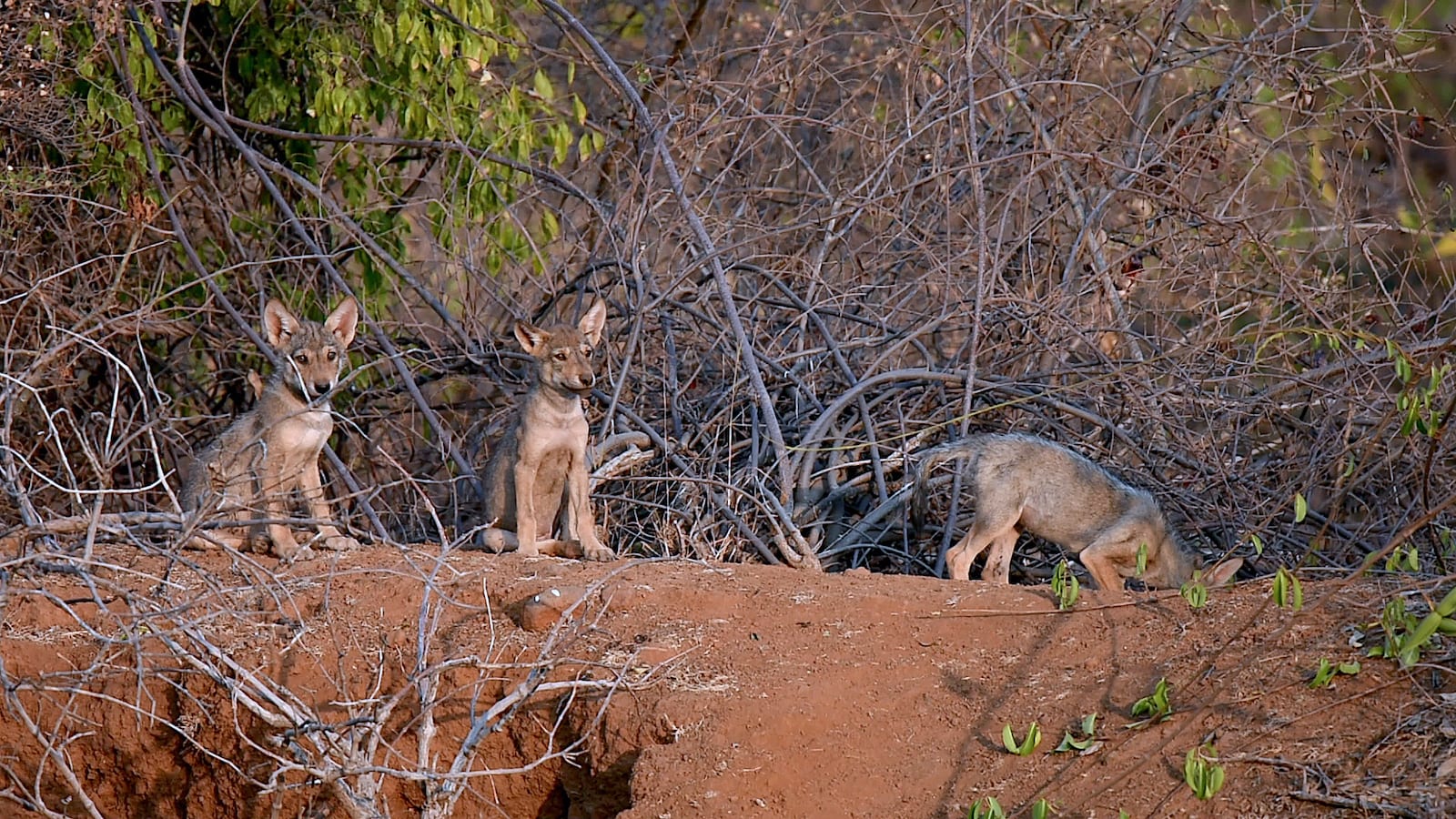 (Left) Wolf pairs breed from mid-October to late-December when the female gives birth to five to six pups in dens. (Right) The sootybrown pups have a white patch on their chest that fades as they age. They stay in the den until they are about three months old. Photos: Yash Moghe/ The Grasslands Trust (left), Siddhesh Bramhankar/ The Grasslands Trust (right)

We do not know how many wolves currently survive in India. Being residents of human-use areas, highly elusive, and difficult to identify, counting them requires extensive effort which has not happened. But we do know, based on some telemetry and mapping studies, that wolf packs commonly use open dry plains and agricultural lands. This means that they are always around people. Because they are so wide-ranging and depend on livestock, national parks and wildlife sanctuaries serve little purpose for their conservation.

Camera trapping in north Karnataka allowed me a window into the life of a wolf pair denning in a rocky hillock beside agricultural fields. The female was remarkably punctual about when she left the hillock and when she came back every day, sometimes with a lamb in her mouth. She could certainly read the landscape, I thought, especially where and when people move. I guessed that she was choosing to go towards the closest village or shepherd camp when human activity was at its lowest. Casual conversations and interviews with shepherds were extremely insightful and I was fascinated by the fact that most of them knew about the wolf pair, their den, and livestock being lost to them once in a while. While one cannot deny occasional killings of wolves by people, few of the shepherds referred to wolves as paalak (the guardian) or sodharmava (maternal uncle) and stated that wolves deserve a small share of the livestock herd. People’s response to animals in their backyard can be complex and this contribution to the survival of wildlife is often underappreciated in conservation. 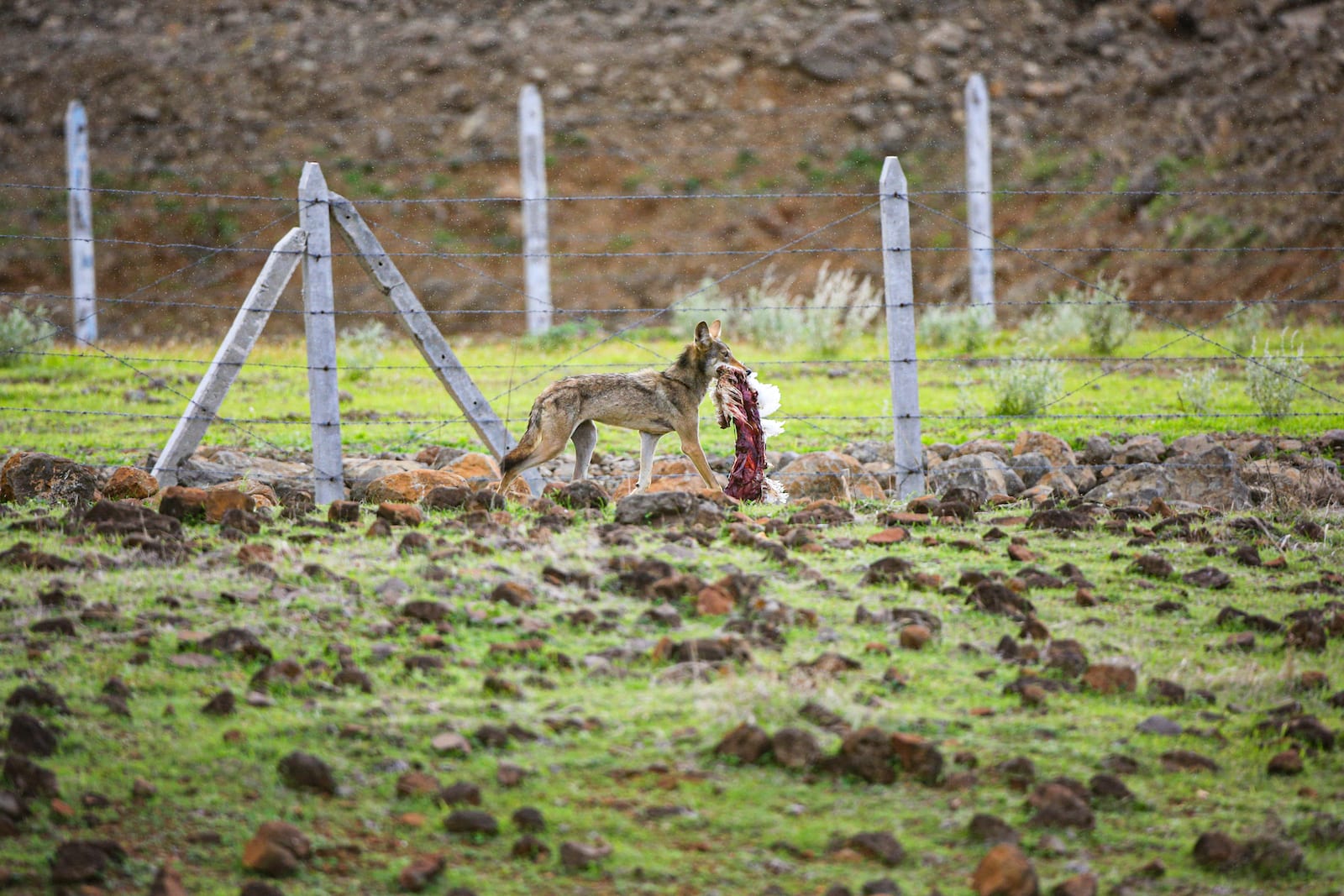 A wolf feeds on poultry waste dumped by farm owners on the Deccan grasslands in Maharashtra. Livestock is a major part of the diet of the wolves, which live near humans. Photo: Mihir Godbole/ The Grasslands Trust

Wolves are “disappearing predators” in two ironic ways. First, they can melt in the brown and grey hues of arid regions and quickly move out of sight. This allows them to share space with people, but from a safe distance. Second, despite this strategy, their survival in human-use areas has become increasingly difficult. They are threatened by domestic dogs and occasional persecution by people. But most importantly, the arid habitats they occupy are undergoing rapid unsustainable change in the form of water-intensive agriculture, energy infrastructure, and tree plantations. This diminishing space affects biodiversity and wolf populations will, unfortunately, disappear if this continues unabated.

For me, Indian grey wolves blur borders between wild and human places. If we do not view farmlands and grazing lands as habitats for wildlife, wolves have no means to survive in peninsular India. The rocky hillock in north Karnataka, the ravines in Rajasthan, and the rocky savanna patches in Maharashtra, all need to exist alongside human-use agricultural areas if wolves are to continue roaming the land. It is only in these shared landscapes that their populations have a future. We need to start appreciating the browns and the greys along with the green and recognise arid habitats for their unique ecological value, which supports people’s livelihoods and these beautiful creatures. 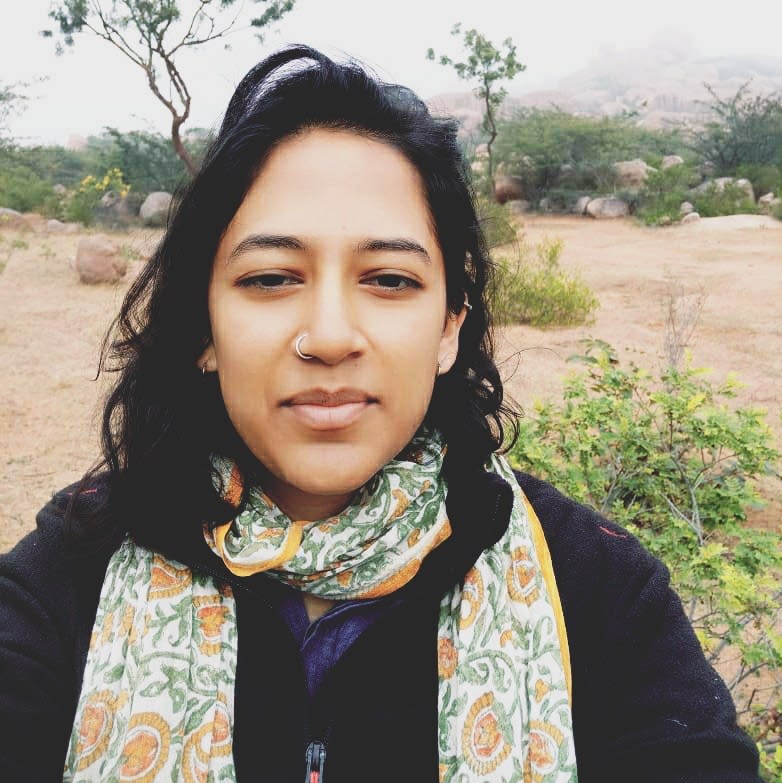 is a PhD student interested in Indian savannas and human-wildlife relations research. Besides academics and field research, she loves cities and thrives on conversations with friends over tea/coffee.