It wouldn’t be a stretch to say that the movie 3 Idiots did more promotion for Ladakh tourism than any state-sponsored advertisement. The tourism boom in Ladakh began in the early 2000s. To put things in perspective, between 2003 and 2018, the number of tourists visiting Ladakh has increased ten-fold. During tourist seasons, there are more tourists in Leh city than locals. Ladakh attracts tourists for many reasons. It has exceptionally picturesque landscapes, unique flora and fauna and is also home to rare traditional practices thanks to its unique cultural history and geographic location. For instance, the nomadic community called Changpas are known to rear the famous Pashmina goats, whose wool is the world’s most sought-after cashmere.

Yet, despite the increased interest in this region, the mention of “dry-toilets” is mostly met with disgust. A dry toilet is essentially a toilet that does not use water. As city-dwellers, we are so used to flush-based toilets, that an alternative remains unimaginable. Our brush with dry-toilets in Ladakh, and subsequent realisation of its aptness for the region was by accident. But it made us realise how our ignorance is contributing to a mounting crisis in one of the most popular tourist destinations in India.

A ‘dry toilet’ is a humble structure made of basic mud walls and a two-storey system, with a toilet on the first level, and composting unit below it. Photo: Adithi Muralidhar Cover photo: With lofty, jagged, snow-capped mountains, and clear rivers, Ladakh is one of the most scenic locations in the country. A toilet sits at the centre of the valley. Cover photo: Blossom Tomorrow/Shutterstock

A cold and dry place, Ladakh is located on the north-western border of the Great Himalayas. Popularly referred to as the trans-Himalayan region, temperatures in Ladakh can range from 30 to -30 degree Celsius. Life in the region is defined by the rules of these harsh weather conditions. For example, in some places, residents stock up on food supplies and essentials like cooking gas, diesel etc., for the four-month long winter. “There is almost nothing you can do during this time. The cold is biting, and we rarely venture out,” says Palmo, a resident of Hanle. Hanle is among the more accessible areas in Ladakh, and thus plays host to a large number of tourists from May to September when the climate is conducive. Our stay with Palmo’s family transpired by a stroke of luck. The lodge we originally chose was over-booked and the kind owner introduced us to this homestay. 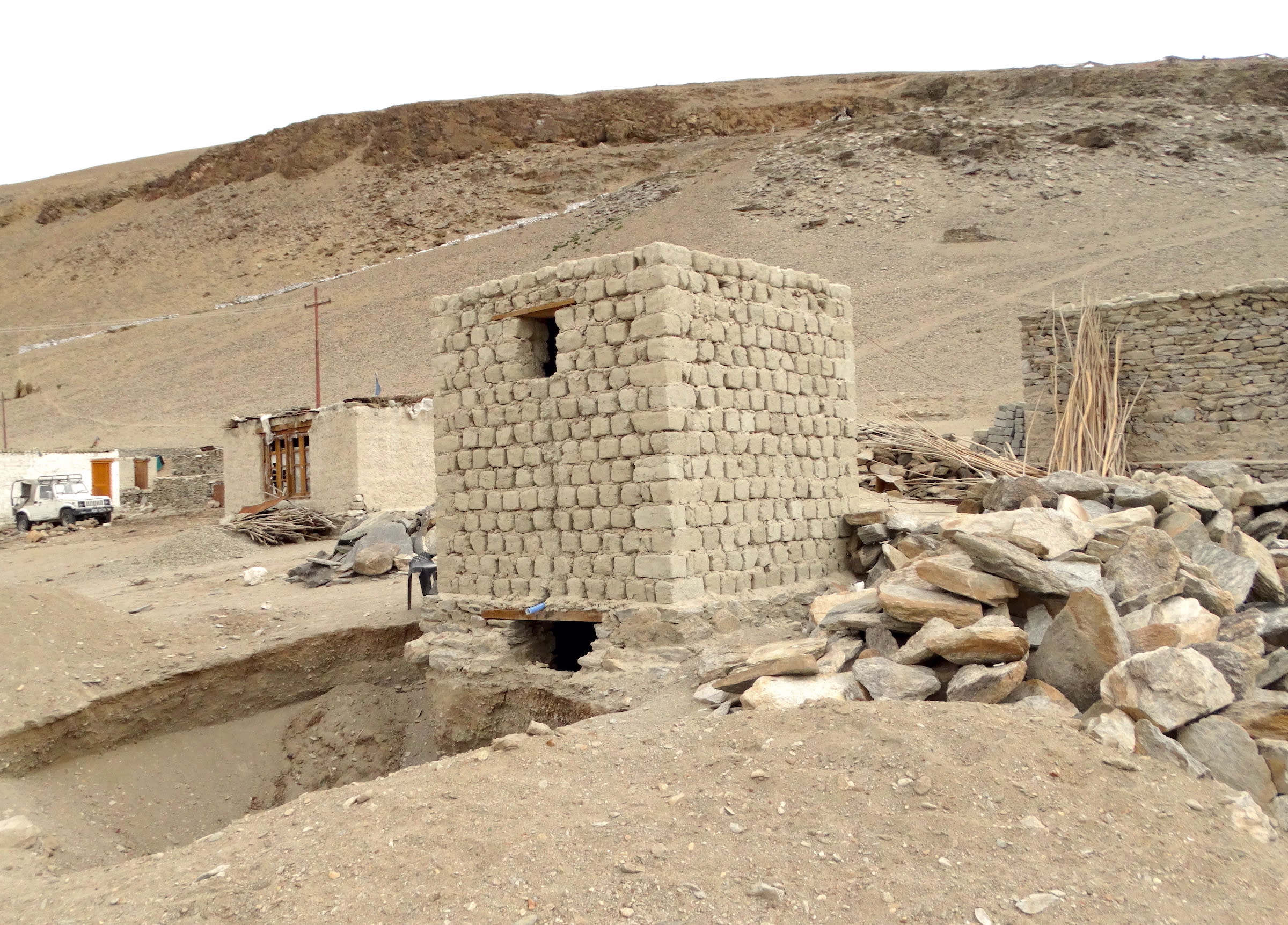 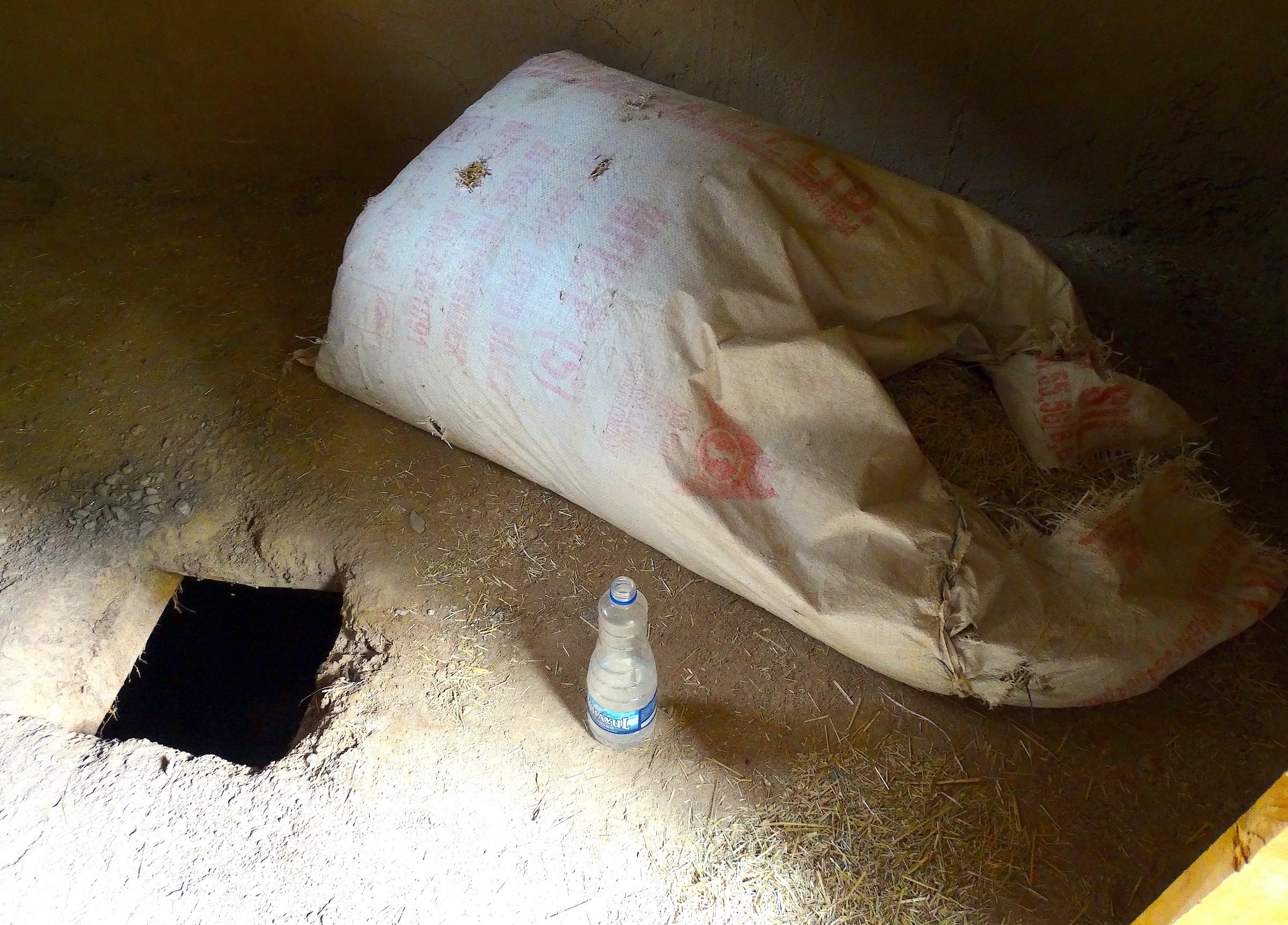 (Left) An ongoing construction of a dry toilet — though the system is being phased out in some tourist areas, several communities still prefer it because it is sustainable and cost-effective. (Right) A dry toilet is literally a latrine pit that comes along with composting matter such as husk, ask and sawdust, that helps in the process of turning human waste into manure. Photos: Adithi Muralidhar

Their home had a spacious kitchen, with a neatly arranged ensemble of copper and gold-coloured vessels. Other areas included a storeroom, a prayer space, several small guest bedrooms stocked with several kilograms of velvety blankets. It was here that we encountered the dry toilet up-close. It was a small four-sided shack made a few metres away from the house. The toilet had a flattened mud platform with a cavity at the centre, that opened to a big pit below the flooring. On the side, a shovel and a stack of hay, ash or agricultural waste like husk was kept to be used as a cover over the fecal matter, thereby aiding in decomposition and removing any odour. A small window at the back and a door held in its place by a wire fastened to a nail, worked as a source of light and ventilation. After a period of time, the contents of the pit are used as manure to sprinkle in the fields. This ingenuous method is best suited for the water-stressed topography of Ladakh. Yet, the demand for “normal” toilets by incoming tourists is pushing this design to the margins. Worse still, sometimes it even inculcates a sense of shame amongst the locals for not having “proper” toilets. 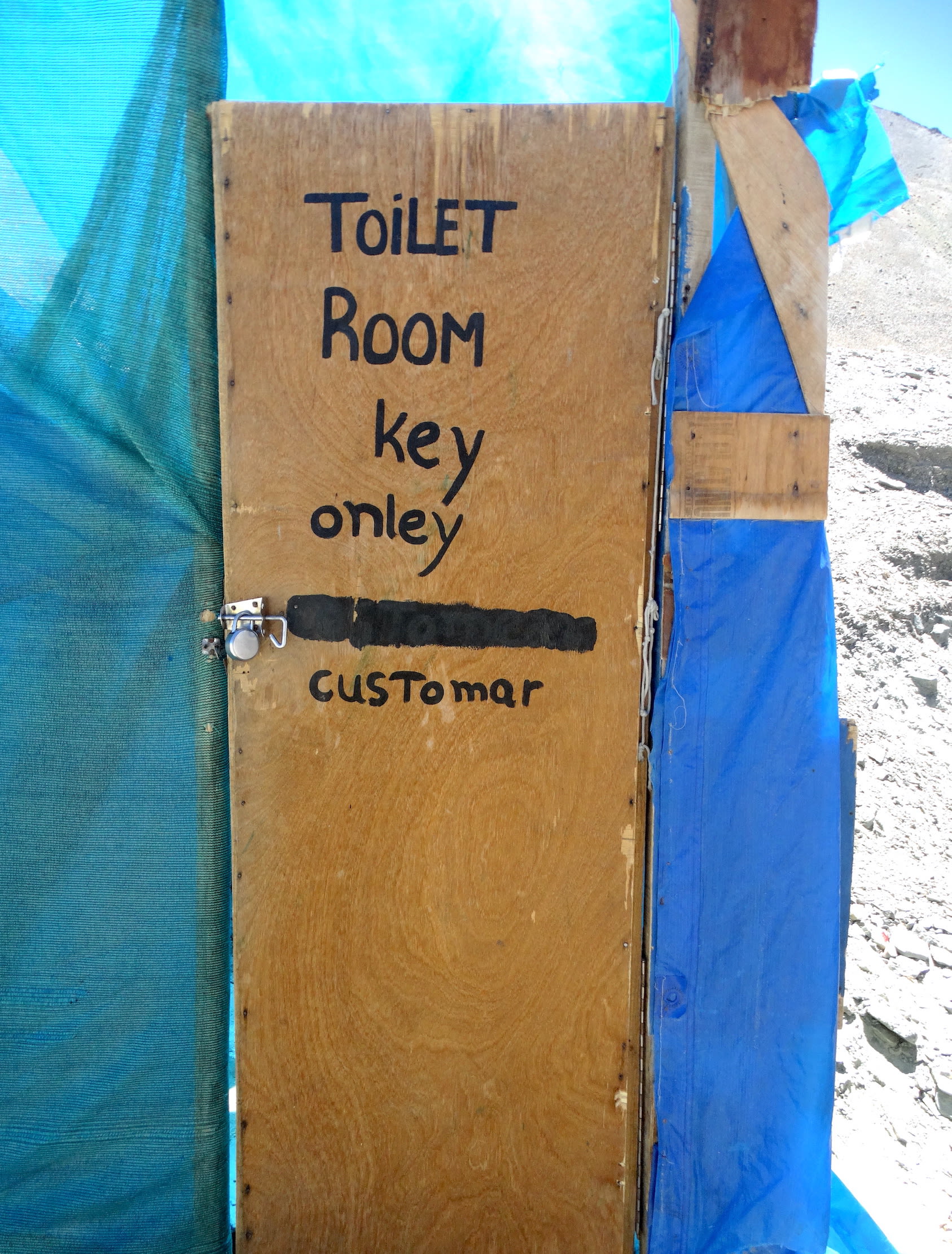 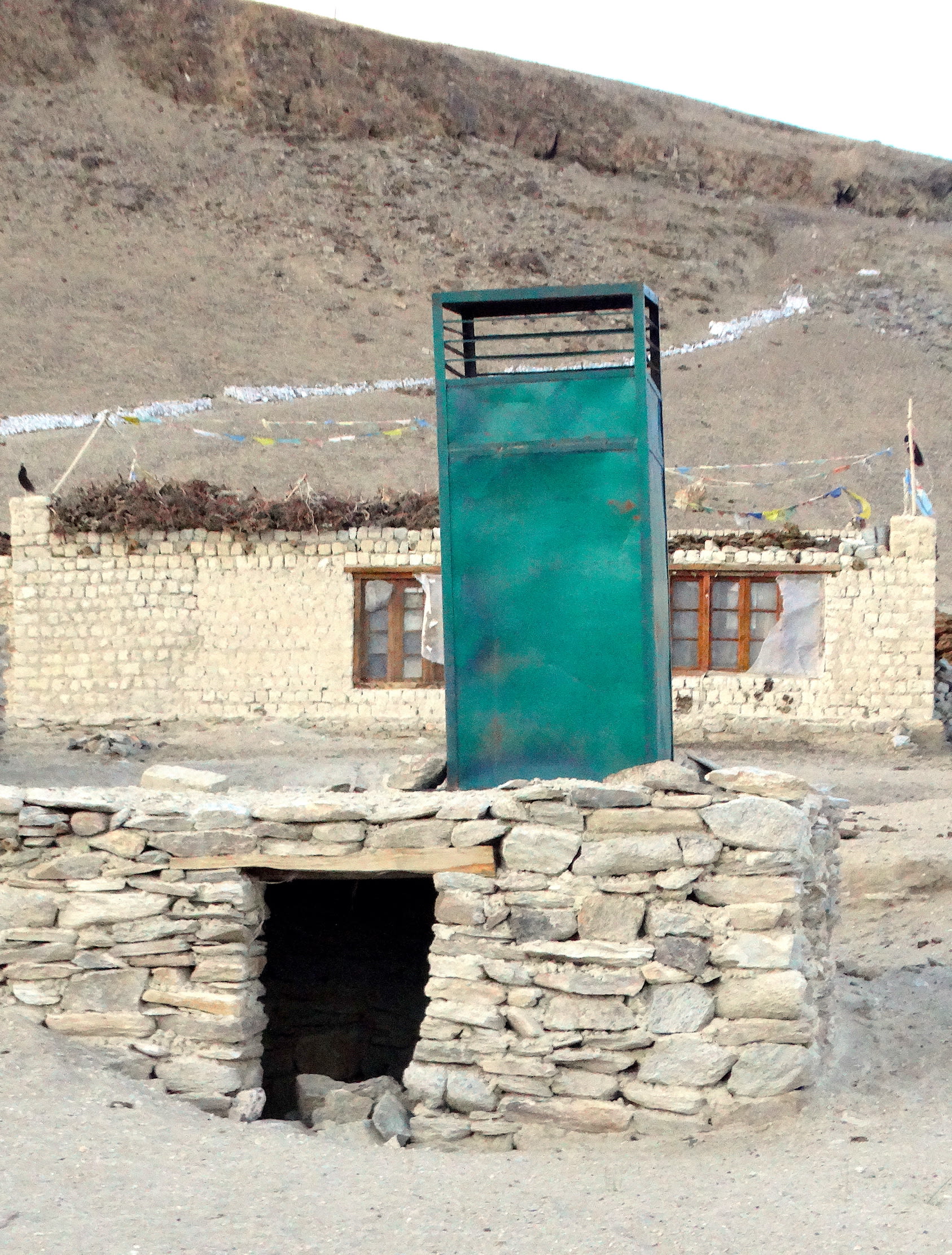 (Left) Makeshift water-based toilets are coming up across the valley, like this one seen in Pangong lake. (Right) A slightly non-traditional dry toilet set-up is used by the army. Photos: Adithi Muralidhar

Palmo voiced her worries, “If we want tourists to stay in our place, then we need to have regular toilets. They always ask us if our home has a regular toilet.” Hanle has become increasingly popular among wildlife enthusiasts. The region is home to some uncommon species like Mongolian finch, Eurasian eagle owl, Tibetan lark, Tibetan gazelle and Pallas’s cat. According to Palmo, many locals are building “hotels with regular toilets” as they see more footfall than the traditional homes. The ongoing constructions ahead of her house testify her observations. Unfortunately, this demand not only puts pressure on locals to alter their traditional homes but is also a very expensive proposition. Water-based toilets require substantial plumbing and septic tank facilities etc. Come winter, the water freezes and pipes crack. So, keeping these pipes in working condition is a recurring expense. 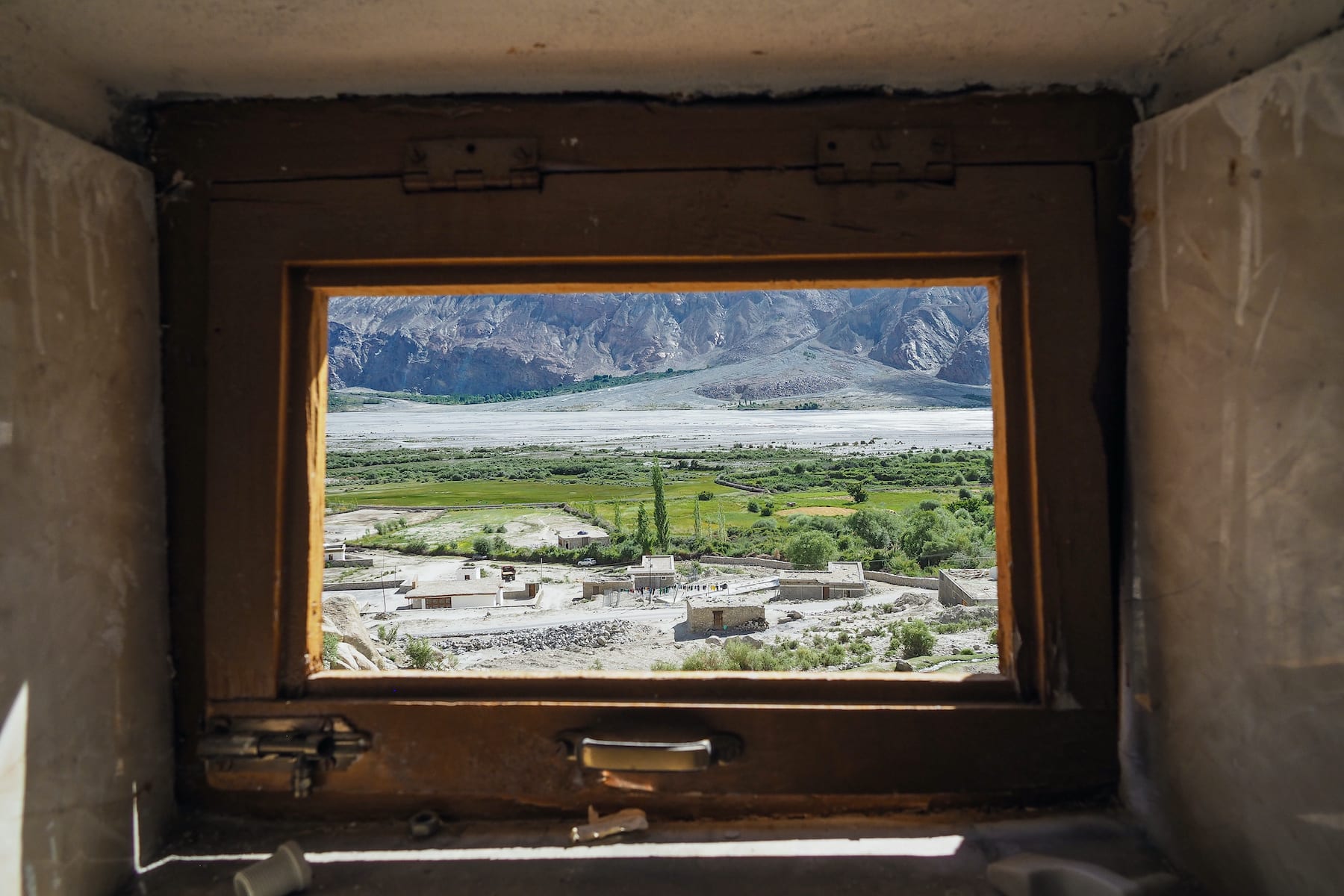 Most dry toilets have a small window to let in light and some air. This window overlooks mountains of the Nubra valley. Interestingly, according to locals and experts, the demand for water-based toilets seems to come more from domestic tourists than foreigners. Photo: Nipshutter/Shutterstock

In recent times, tourism associated with the elusive snow leopard has been on the rise. Organisations like the Snow Leopard Conservancy-India Trust are working towards promoting eco-tourism whilst upholding and sharing the traditional sustainable ways of life in the region. According to Dr Tsewang Namgail, director of Snow Leopard Conservancy-India Trust, “Typically the average water consumption by a tourist in Ladakh is around 3-4 times more than the average water consumption by a local. This disparity in itself indicates the unjust consequences emanating from water-based toilets and other pressures tourism puts in the region.”

Additionally, Dr. Namgail says, “Schemes implemented in Ladakh are influenced by ‘successful examples’ that have worked elsewhere in India, which may not work in a region like this. We need solutions that work in places that share similar geographical features.”

In the absence of a proper sewerage system, more populated towns like Leh have increasingly been adopting water-intensive flush toilets and constructing soak pits for waste-water disposal. Consequently, this has led to shallow groundwater pollution, while also putting enormous pressure on the scant water resources. Further, studies also draw parallels between ground water pollution, increased instances of diarrhoea, and high levels of coliform bacteria near drinking water sources in Leh, in post-tourist season.

However, all is not glum. As Tsewang Dolma, chief programme coordinator, Ladakh Ecological Development Group (LEDeG) shares, “In 2018, a public convenience in Leh city was developed under the European Union and Bremen Overseas Research and Development Association funded ‘Project Livable Leh’ that runs all year round and uses a water-based system. What is different is that the facility is maintained all year long and uses insulated walls and pipes which are designed to function throughout the year.”

These success stories however do not disregard the efficacy of dry toilets. Yet, during our entire trip in Ladakh region, we came across several locations that had flush toilets. Take for example the famous Pangong lake which sees thousands of tourists each year, and is lined with shops, restaurants, and lodging facilities. What entices the tourists most is a board that says, “toilets available”, usually implying a water-based toilet. A restaurant where we stopped for lunch, had a small toilet built just behind it. Though the four walls were made of tarpaulin, the centre structure was a ceramic Indian-style toilet fit into the soil unevenly with a bucket of water and mug. We were intrigued by this make-shift structure. How deep was this pit? What would happen to this setup in winter? These questions troubled us as we left Pangong. It made us wonder if a little adjustment on our (tourist) side could really revolutionise the way tourism is planned for this region.

works in the area of education and has a keen interest in the dynamics of society and environment. She blogs on www.earthlynotes.com and has recently discovered Instagram! (@theearthlynotes)

works in the field of environmental education and is an avid urban farmer. She can be reached at deborah@hbcse.tifr.res.in