While lesser floricans are learning to live with farmers in Shokaliya, Rajasthan, their numbers continue to plummet in the central Indian state 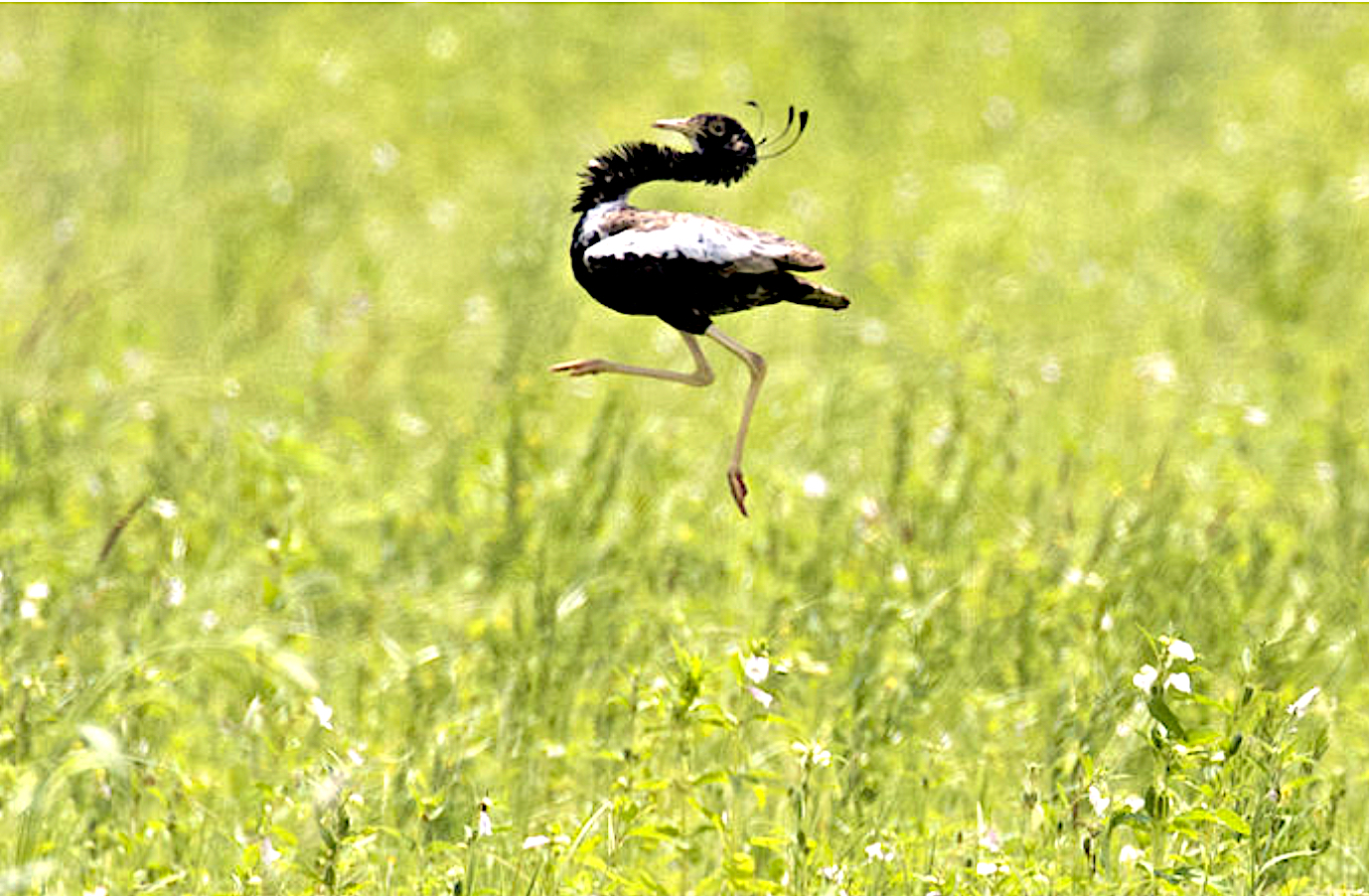 Described as “elegantly comical” by the late ornithologist Ravi Sankaran, the lesser florican, a bird of open grasslands, has been consistently dwindling in numbers in Madhya Pradesh, with farmers switching from traditional crops to soybean being one of the reasons for the decline. In Rajasthan’s Shokaliya, however, a small population of the endangered species has adjusted to traditional crops amid multiple challenges.
Lesser florican (Sypheotides indicus) is the smallest of India’s three resident bustards (the other two are Bengal florican and great Indian bustard). It occurs in dry grasslands with scattered bushes, scrub, and in agricultural fields of millet, cotton, and some cereal crops. The lesser florican (or kharmor in Hindi; meaning grass peacock) has separate breeding and wintering sites with rainfall and land-use intrinsically linked to the sprightly florican’s breeding habits. Sufficient grass cover is particularly important during the breeding season. Large trees with big canopy are not desirable in the florican habitat, experts have said.

With 340 males of lesser florican reported in India (conservative estimate of 264 individuals), efforts are on to understand more about the grassland species in its non-breeding zones and drum up community support for its protection outside protected areas (PAs).

The bird, celebrated for its aerial courtship display, was once widespread and common but now breeds in Gujarat, southeast Rajasthan, northwest Maharashtra, Kurnool district of Andhra Pradesh, and western Madhya Pradesh. India’s grassland habitats underwent rapid degradation in the last three decades, causing this bird to become rare. The lesser florican was included as one of the priority species for recovery by the Ministry of Environment, Forest and Climate Change (MoEF&CC) in 2009, under the scheme of Integrated Development of Wildlife Habitat.

Heavily-mined Shokaliya’s unprotected agricultural plots near Ajmer in Rajasthan and the grasslands in and around Gujarat’s Blackbuck National Park, Velavadar, are the strongholds of the bird’s breeding population. Velavadar’s small protected grassland habitat of 50 square km has as many birds as those sheltered by 1000 to 2000 square km of agriculture-dominated terrain in Shokaliya. They visit Velavadar in high densities as compared to Shokaliya.

“They change their breeding areas at a micro-level between years: wherever there is good rainfall, and crops are sown, and they grow faster and the grasslands grow faster, it brings insects, and this attracts the floricans,” said Dutta. Grasslands and crops of amenable heights help the florican to forage on insects, scan the landscape for predators and put up its crowd-puller aerial breeding display during the summer monsoon.

A 2011 WII survey report states that lack of a national policy on grassland management, pesticide pollution, invasive species, inadequate coverage of florican habitats in the protected area network, and lack of knowledge on the non-breeding habitats of this species are significant threats to this species. And the 2017-2018 lesser florican survey shows that although lesser floricans can breed and survive in agricultural landscapes, they prefer and occur at much higher densities in grasslands that are large, contiguous and with adequate herbaceous biomass. Very few protected grasslands are currently managed in this form with the only exception of Blackbuck National Park, Velavadar. Additionally, the survey report underscores that local people should be allowed to retain ownership of land in priority conservation sites and to avoid public antagonism towards lesser florican conservation. Public antagonism towards lesser florican conservation, however, has created a stir in Madhya Pradesh, even as the forest division in Ajmer, Rajasthan has prepared a proposal for a community conservation initiative.

Livelihood versus conservation
In Madhya Pradesh (MP), which has two PAs dedicated to the bird, experts cite deficient rains and food for the birds’ decline. Dhar, Jhabua, Ratlam, Mandsaur, and Neemach are some state districts where the environment is favourable for lesser floricans.

“Changing agricultural patterns is a very prominent reason. Farmers of MP have shifted to cultivating soybean from traditional pulses like moong and urad. Pests on these crops are food for the birds. Farmers spray pesticides on their crops resulting in habitat loss of the birds,” said Dilsher Khan, a Madhya Pradesh-based bird expert, who had prepared a report on the declining number of lesser floricans a few years ago for the forest department.

“Another prominent reason is the human population. I found busy roads, constructions, and other human interference in birds’ habitat in Dhar district,” Khan explained.

J.S. Chauhan, Additional Principal Chief Conservator of Forests, Wildlife Wing, Madhya Pradesh, revealed the dwindling number of floricans over the recent years. “We recorded 11 lesser floricans in the year 2019. The number used to be 48 in the year 2015. For the years 2016, 2017, and 2018 the numbers of lesser floricans were 39, 19, 27 respectively,” Chauhan told Mongabay-India.

Despite protected habitats, the bird is in the crosshair of a conflict between forest/wildlife management rules and community aspirations.

The lesser florican’s habitat, a grassland, in the Dhar district of Madhya Pradesh. The habitat is under threat due to overgrazing. Photo: Dilsher Khan.

The Sardarpur Kharmor Sanctuary, a 348.12 square km area, has slightly over 200 sq km of private land under the protected areas’ ambit. Farmers, who are landowners, are not allowed to carry out developmental work or sell the property. A year ago, farmers from 14 villages of Sardarpur block demanded revoking the ban on property sale.

“Landowners in the vicinity of the protected area feel that the bird is causing slower development in the area as they cannot sell their lands. Due to this, they are not very happy with conservation activities,” acknowledged J.S. Chauhan, adding that it is challenging to protect the eggs of the bird as they lay eggs in an open area spanning the private lands as well.

“We try to coordinate with farmers, and they are even benefited from conservation work. We protect grass during the migration season of birds and allow farmers to cut that grass once the birds leave the place,” said the sub-divisional officer of Sardarpur forest division Santosh Kumar Ranshore.

Mohammad Khalique, a Bhopal-based expert working with local farmers of Bhoj wetland for Sarus crane conservation, said one needs to link conservation work with the local community’s livelihood and explain to them how protecting a bird will benefit them indirectly in terms of tourism and bird watching. “I’m working on this model in Sarus crane conservation and successfully getting the support of locals,” said Khalique.
Considering all the difficulties, the MP forest department is now planning to go for conservation breeding. “The department has prepared a plan, and it is under consideration of the State Wildlife Board. We need a budget of around Rs. 4 crores to operate this facility for five years,” said Chauhan. The forest department has approached the Salim Ali Centre for Ornithology and Natural history (SACON) to build a conservation breeding centre and operate it with their expertise.

In Rajasthan’s Shokaliya, a small but viable population of the birds is distributed in patches across the landscape, particularly in croplands growing traditional crops such as jowar, urad, moong, til (sesame), and maize, according to a 2020 report by Bombay Natural History Society (BNHS). In a survey covering 3700 square km of the landscape, researchers spotted 34 males and nine females in a 266 square km area.
BNHS researchers hope the florican will not suffer the same fate as the great Indian bustard (GIB) at Shokaliya. As many as 55 GIBs were reported in this landscape in the 1990s, which reduced to four birds in 2016. There has been no confirmed sighting of GIBs since then in Shokaliya. Except for a few reserve forests, there are no Protected Areas in the Shokaliya landscape to conserve floricans.

A mosaic of unprotected grassland/shrubland and agricultural land in Shokaliya, Rajasthan, home to the lesser florican. Prosopis juliflora (the tree in the foreground), power lines, changing farming practices are some of the threats to the birds. Photo: Kartik Chandramouli

Adapting to agricultural spaces but still a long way to go
Researchers said the birds visit Ajmer because of the “self-management of grazing land by local communities and traditional crops” preferred by farmers. Floricans were mainly seen in the croplands as most common grazing lands or pasture lands are now full of Prosopis juliflora, making them unsuitable for the species. “The birds prefer areas with traditional crops like jowar, moong and urad growing up to a height of 50–100 cm; this way the birds can spot predators when the crops are at a comfortable height and the female birds can see the males putting on the aerial display during the breeding season,” said BNHS researcher and report author Sujit Narwade.

“Farmers in Ajmer are unknowingly helping conserve the birds by growing a mosaic of traditional crops, which means that we have reasons to hope that if we involve the community in conservation, we will be able to protect the species,” Narwade told Mongabay-India.

Sutirtha Dutta elaborates that grasslands dominated these areas across western India and peninsular India, and subsequently, many of these areas were converted to agricultural landscapes. The birds have adjusted to the alternate crop patterns in Shokaliya, said Dutta.

A lesser florican peeks through the grass before shooting into an aerial display. The bird needs sufficient grass cover for survival. Photo: Kartik Chandramouli

“Farmers in Shokaliya practise mixed cropping; they alternate crops in landholdings; for example, a farmer will plant jowar (sorghum) and the next landholding will have moong; then in the next year the jowar planter will plant moong and the moong planter will sow jowar. So the recycling of crops adds minerals back to the soil.”

“Jowar is a taller plant while moong is shorter. So when the lesser floricans first come to this landscape from their non-breeding site (which is distributed in central and peninsular India), they first come and colonise these grasslands and jowar plantations, which resemble grasses in the beginning. Soon enough, the jowar becomes much taller, and the birds do not prefer very tall crops, so they generally shift to moong (50 cm), which are the shorter plants. This system works well for the birds,” said Dutta.

“From Ajmer, they go to MP and then towards Maharashtra, but we require a much longer period of data; this is very preliminary. Threats to the birds are not comprehensively known, and habitat destruction is a broad term; we need to understand the details. What we know of the birds comes from studying them during the monsoon (July to September); from October to June, nothing is known about these birds,” said Dutta.

“Much of the inference will take time but what we have seen is that where they find little vegetation cover of existing crops, they stay there, and they move to other areas when the crops are harvested,” said Dutta.
Dutta bats for a landscape-level conservation approach and regulated land use instead of restrictive/prohibitive practices. “In Shokaliya, some activities (involving the community) has started, but there is still a long way to go before we get to a stage where people are knowingly managing the habitat for benefits to the lesser florican.”

“We still don’t have any example for lesser floricans where we know people are managing a large area in a way that benefits the bird, rather than by default; in Gujarat the Corbett Foundation is trying to involve local people, to practice organic farming,” he said.

Meanwhile, small successes in artificial hatching of lesser florican chicks have brought cheers to the Ajmer forest department that has also drafted a proposal for setting up a conservation reserve dedicated to the lesser florican in a village in Shokaliya.