Life of Corals: Witnessing an Ecosystem in Collapse

As oceans warm up the symbiotic relationship between corals and microscopic algae breaks down. Corals get bleached, making them susceptible to disease and eventually leading to the death of reef ecosystems

As you read this, environmental news headlines from around the world flash morbid truths:

“Breakdown in coral spawning places species at risk of extinction.”

It appears as though the 21st century narrative for coral reefs will primarily be one filled with doom and gloom. Very often, I feel doses of regret for not having started my career in scuba diving sooner. I began diving three years after the worldwide coral bleaching episode of 2010, caused the immediate death of more than half the coral in the Andaman Islands. And yet, my first few dives were more spectacular than I could ever have imagined.

OUR OCEAN
The ocean at first appears nothing more than a vast and monotonous expanse of blue. We are in awe of its majesty when we catch a glimpse of its limitlessness from an airplane window. We get to experience its power every time we get tossed and tumbled by a wave on the beach. But the ocean is also more than that.

Several ecosystems lie hidden beneath the surface: shallow coral reefs, sea grass beds, sea mounts, the deep ocean, and the vast open pelagic. Each sustains an intricate web of life, working independently, and together, to shape much of how life on Earth functions. Phytoplankton, sea grasses, blue-green algae together provide easily over 50 per cent of the oxygen we breathe on land. Currents and gyres travelling across the world’s ocean basins, along with the carbon dioxide absorbed and stored by its inhabitants, determine our climate.

Having a significant role in shaping the climate also means being significantly impacted when even a few variables change. Enter the industrial revolution. This landmark period launched humanity into the era of modernisation, but it also increased enough carbon dioxide and other greenhouse gases in the Earth’s atmosphere to initiate global climate change.

The ocean absorbs and stores a substantial amount of this excess carbon. So much so that the temperature at its surface has increased by about 0.13 degrees every decade for the last 100 years. If that does not set any alarm bells off, it will help to take a dip back into our favourite coral reefs, and witness the challenges they face as they cope with a warming ocean.

An entire ecosystem is at the edge of collapse and we mustn’t let it vanish with just another headline (top). Coral reefs require moderately clear and optimally warm waters to thrive (bottom left). Coral reefs are so full of diverse marine life that one imagines they could never run out. In the 21st century, however, more and more of the ocean’s life forms are being led to extinction (bottom right).

Corals are animals, and thrive in a “live-in” relationship with colourful, microscopic algae that we call zooxanthellae, which are their primary food producers. This relationship works only within a range of temperatures (23°–29°Celsius). With the right amount of light and warmth, zooxanthellae prepare food in return for shelter. Corals assimilate this food and channel it towards growth and the building of a limestone skeleton.

When temperatures rise even by one degree above the optimum temperature range, this long-standing, but delicate partnership starts to break down. The coral animals are no longer able to host the zooxanthellae and proceed to get rid of their algal partners.

Corals without their symbiotic algae are practically starving. They are stressed and weak, but not necessarily dead, yet. Soon after they expel their algae and “bleach”, corals will look white, revealing the true colour of their skeletons. The polyps are still alive and their tentacles will search for plankton to catch. Bleached corals can wait for a couple weeks for the temperatures to cool down enough to take up zooxanthellae again. Beyond that, they will succumb to competition, disease, and ultimately die, only to become a surface for something else to grow on.

Bleached coral is still alive, but far from healthy. A close-up of a bleached Acropora coral reveals tiny polyps with their tentacles out, actively looking for plankton.

Imagine this process of coral bleaching taking place in each polyp of every colony on every reef across our ocean basins; triggered by a unit degree rise in water temperature. The world woke up to this phenomenon after the 1998 mass-bleaching episode killed large spans of reefs across the Indo-Pacific.

We now know that corals across the world have gone from being under a 5 per cent risk of getting affected by bleaching back in the 1980s, to a whopping 31per cent four decades later. Every further rise in ocean temperature results in a huge setback to any recovery made by new corals trying to establish themselves on a reef. Where there once was a strong and complex 3-D coral foundation teeming with thousands of species of marine life, there are now slowly denuding rocks left behind by erstwhile corals. Matter-of-fact predictions state that very few coral reefs in the tropics are likely to make it through the next 80 years.

The ocean, even in its stressed state, will never cease to amaze us. To this two-inch-long sap sucking slug, this algae covered patch of rubble is the world.

REEFS, PEOPLE and CO2
With diving continuing to grow as a sport, a culture and community has mushroomed the world over. More people are getting an opportunity to explore and fall in love with the ocean. Even though we have lost so much to global warming and coral bleaching, we are constantly discovering new life amidst the rubble. This only goes to show how resilient and diverse these ecosystems are. However, we cannot ignore the signs of a collapsing ocean, or pretend that we have nothing to do with it.

Our connection with the ocean goes back centuries, and our understanding of its movements and moods is nuanced enough to sail across its vastness, harnessing only wind. In the 21st century, the ocean undoubtedly still feels the impact of this connection with us. Our lives are heavily dependent on fossil fuels, from lighting up our houses and transport, to manufacturing plastic, clothes, and practically everything we consume. 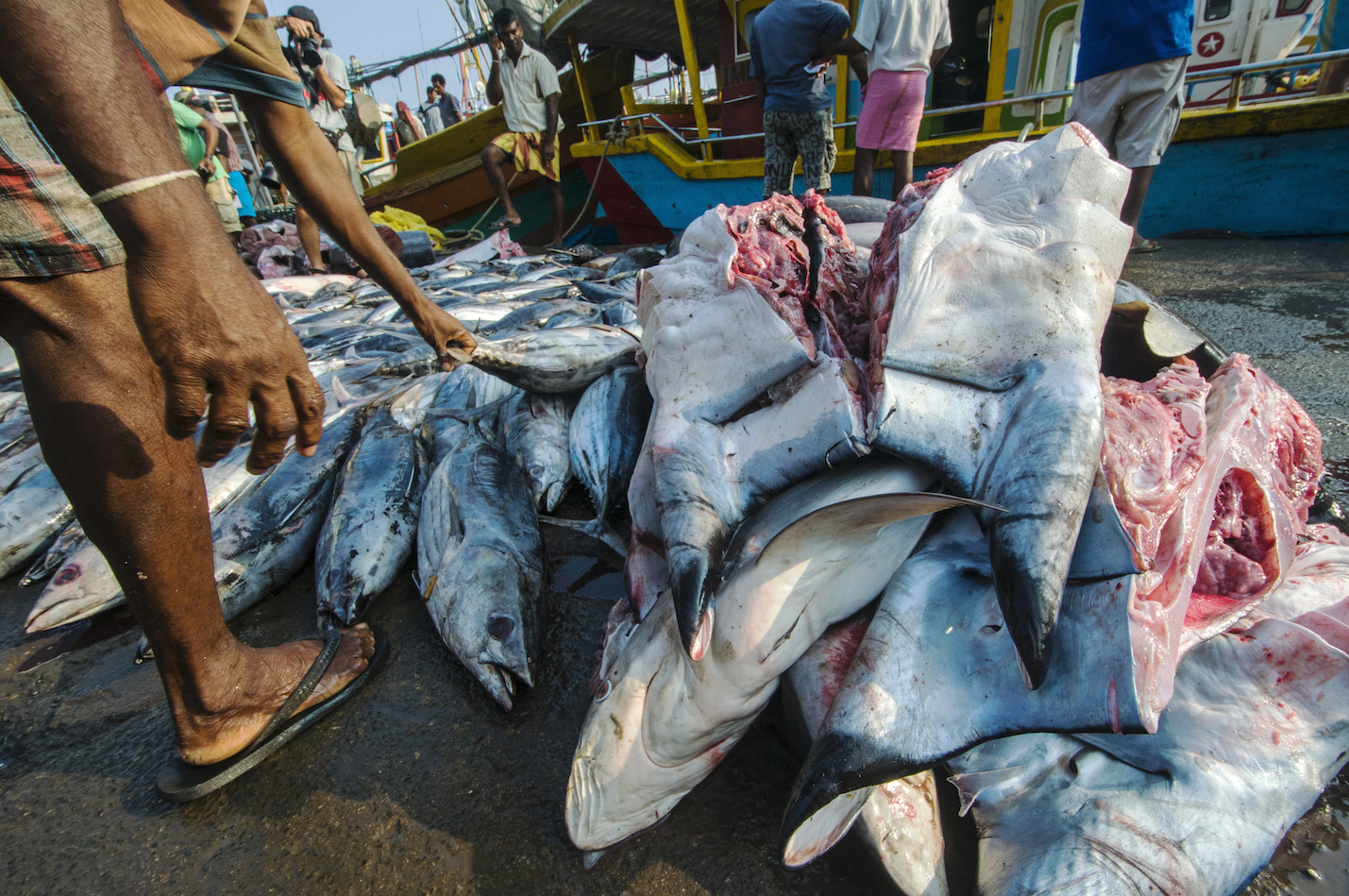 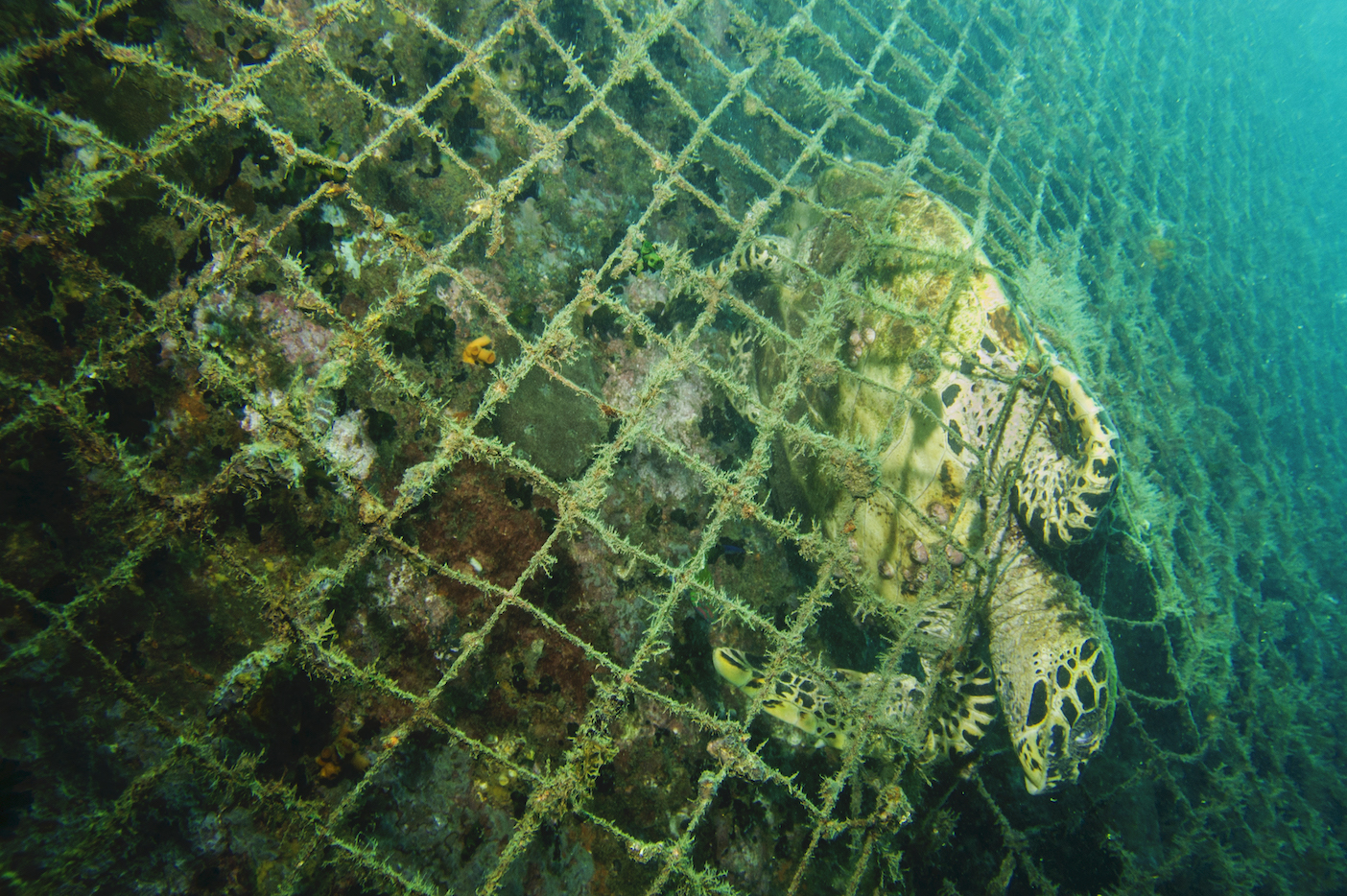 Destructive fishing practices still prevail across the world, including in India, feeding an ever growing industry that values marine life more when dead than alive (left). These practices care little for the damage caused to other amazing creatures of the oceans: turtles, whales, dolphins, and many other large sea dwellers (right).

In addition to pumping carbon into the air and water, at rates higher than the targets countries have set to reduce climate change, we also look at the oceans and reefs as a colourful multi-billion dollar seafood industry. We have also successfully changed the chemical composition of seawater through acidification, and more recently the introduction of micro-plastics. Chronic ways in which we exacerbate the effects of climate change on the ocean include introducing a steady inflow of pollutants through rivers, coastal construction, clearing forests, and lowering the quality of water that corals so need for growth.

The bottom line is that our global carbon footprint must reduce. We definitely shouldn’t be allowing large swathes of forests to burn down to a crisp. The onus of making and adhering to responsible policies to combat climate change lies with governments. This doesn’t eliminate the responsibility and power we have as individuals.

The first and best thing to do to restore our oceans is to restore our relationship with it. To make nature a big part of our lives again. Spend enough time out there in the forests and in the oceans. Appreciate its beauty, be lost in its mysteries, understand how much of our lives depend on it and perhaps our minds and hearts will organically find less destructive ways to live with it. When an entire ecosystem is at the edge of collapse, we must not let it vanish with just another headline.