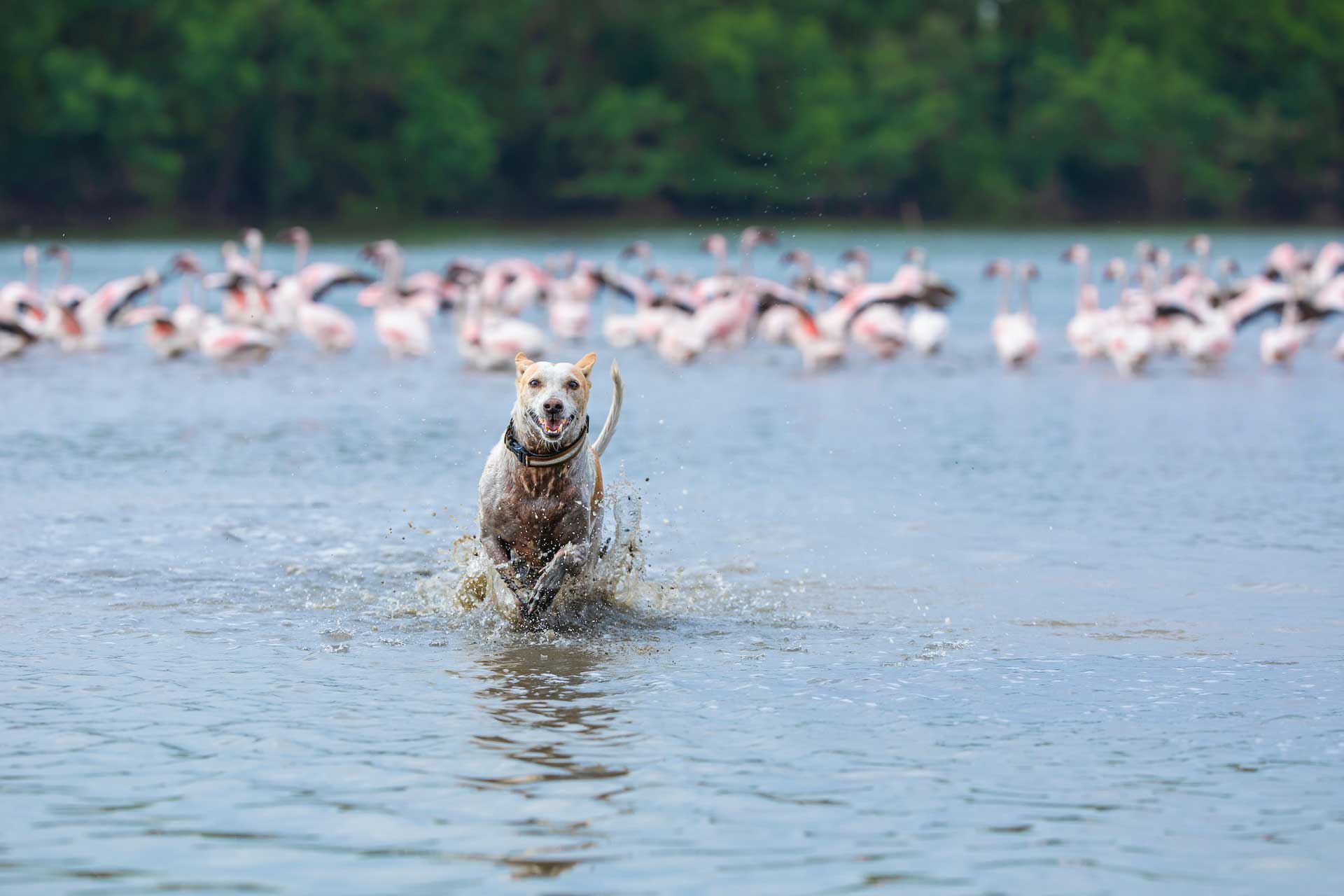 The problem of free-ranging dogs attacking, killing, and consuming wildlife is widespread in India. That this occurs within “Protected Areas” (PAs) and threatens endangered species is all the more troubling. PAs refers to spaces like wildlife sanctuaries and national parks protected under the Wildlife Protection Act (WLPA), and “free-ranging dogs” refers to free-roaming dogs that may or may not be under the care of a person.

According to data presented in a paper by Doherty et al. published in the journal Biological Conservation, in 2017, domestic dogs have contributed to the extinction of 11 vertebrate species and are a known or potential threat to at least 188 threatened species worldwide. Indeed they pose a very high threat level from predation, disturbance, disease transmission, competition, and hybridisation.

Scale of the problem in India
Globally, dog populations are estimated to be around one billion, and India has one of the largest feral dog populations (about 60 million). Like in other parts of the world, dogs in India have contributed directly to wildlife population declines. For instance, the World Wildlife Fund (India) has linked the decline of the black-necked crane in Ladakh directly to free-ranging stray dogs feeding on their eggs and chicks.

“In places where there are endangered or critically endangered species, predation or harassment by free-ranging dogs is a significant problem,” said Abi Vanak, Fellow (Associate Professor), Centre for Biodiversity and Conservation at the Ashoka Trust for Research in Ecology and the Environment (ATREE). Vanak notes examples like predation threats dogs pose to the great Indian bustard and black-necked crane and their eggs and hatchlings. 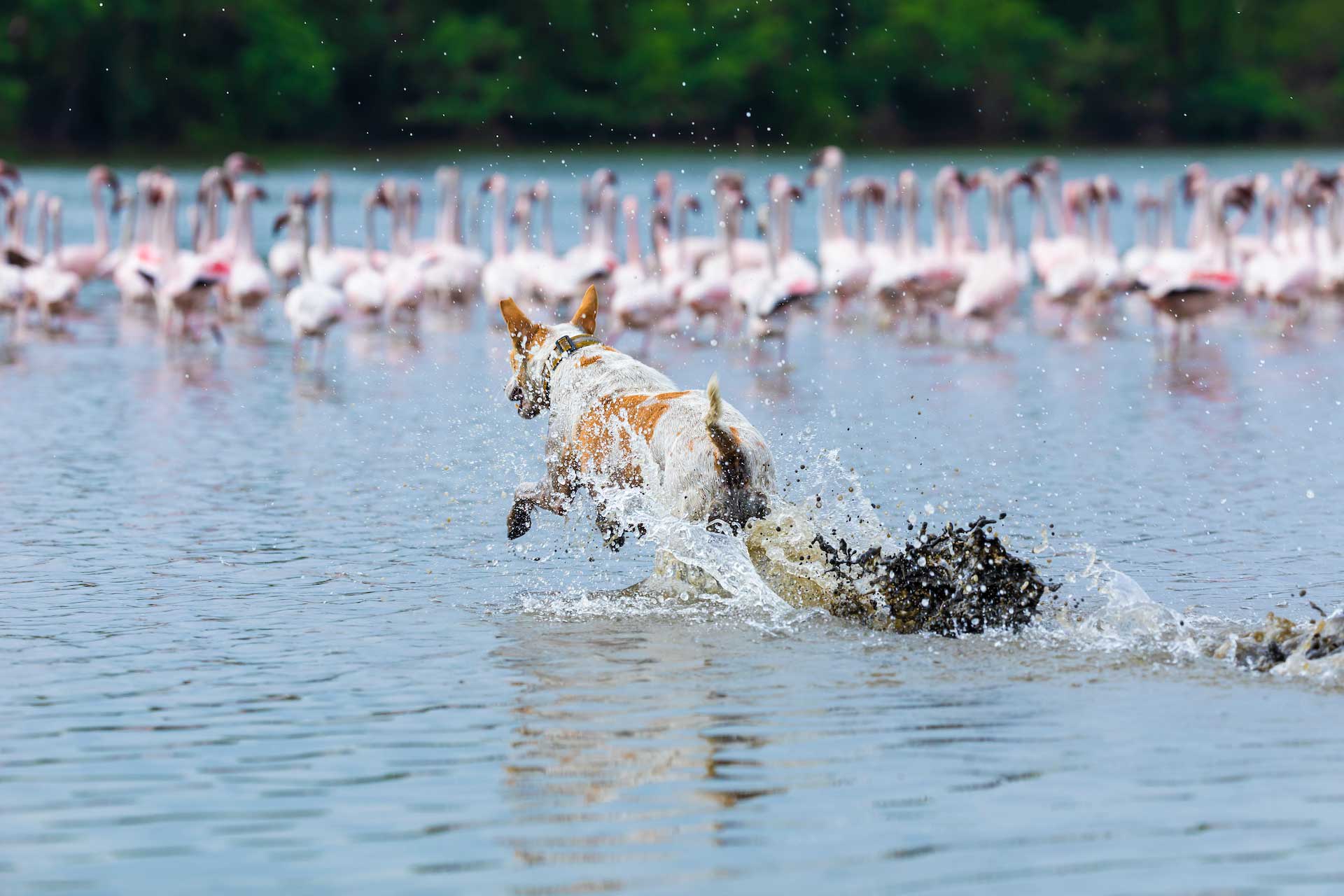 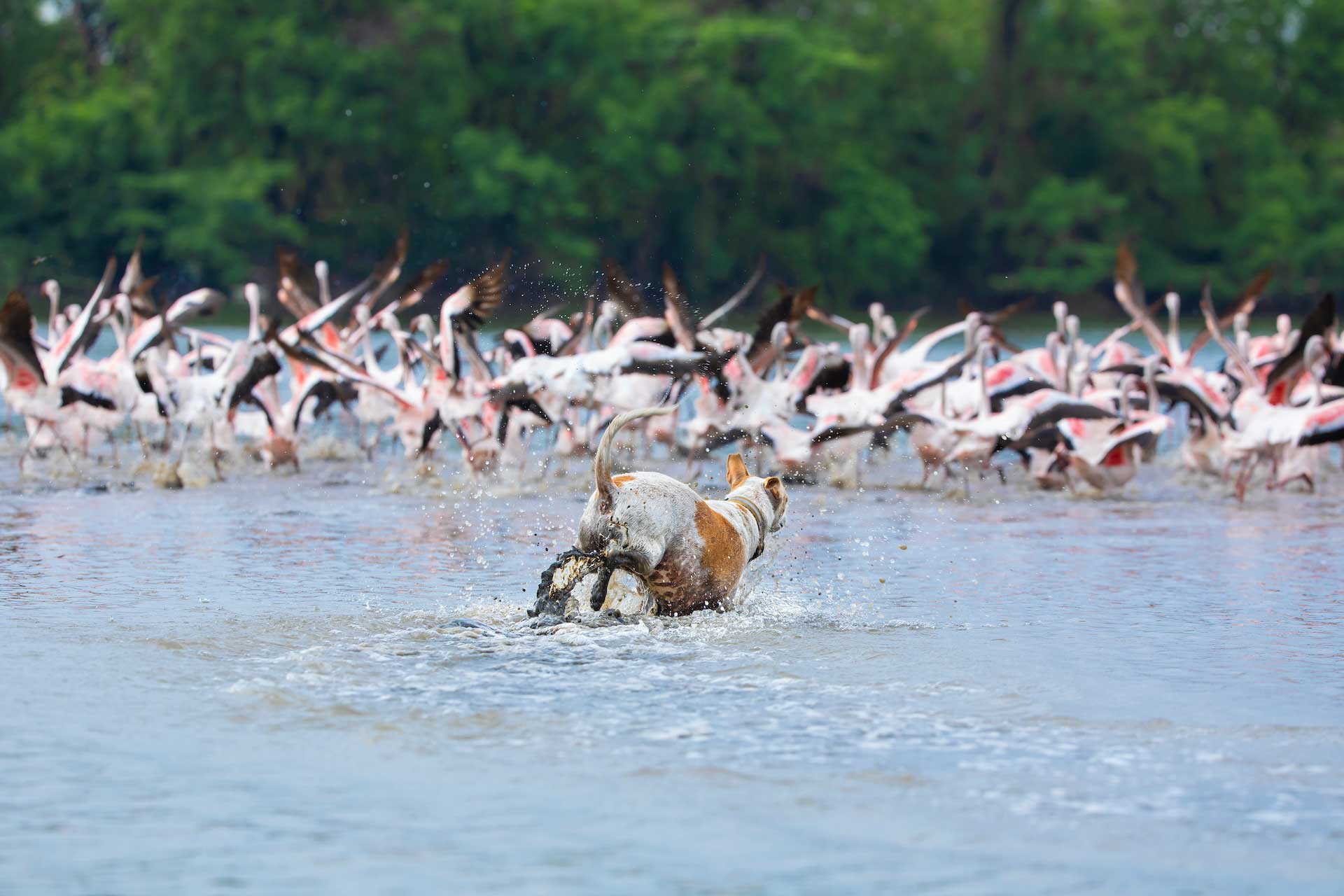 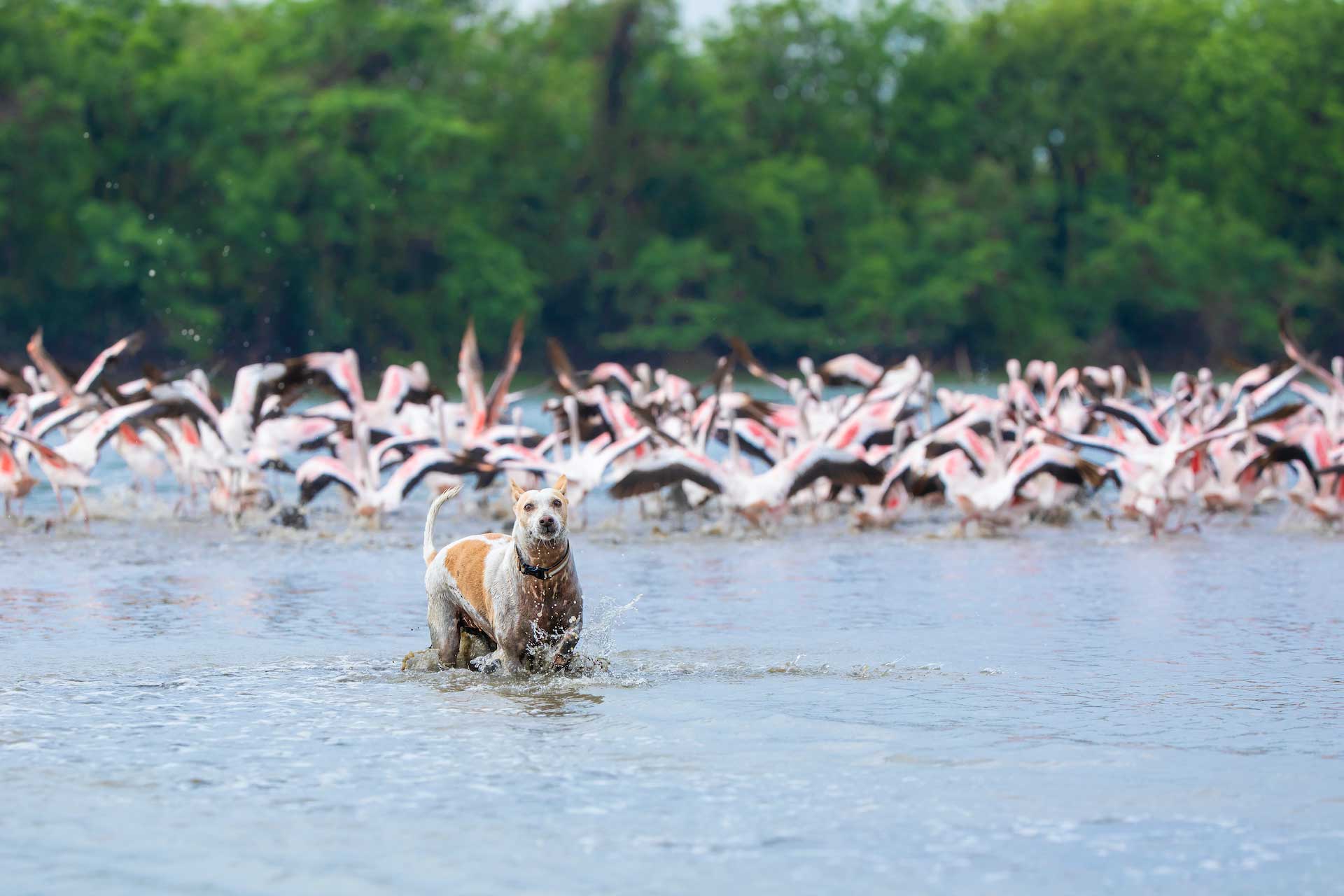 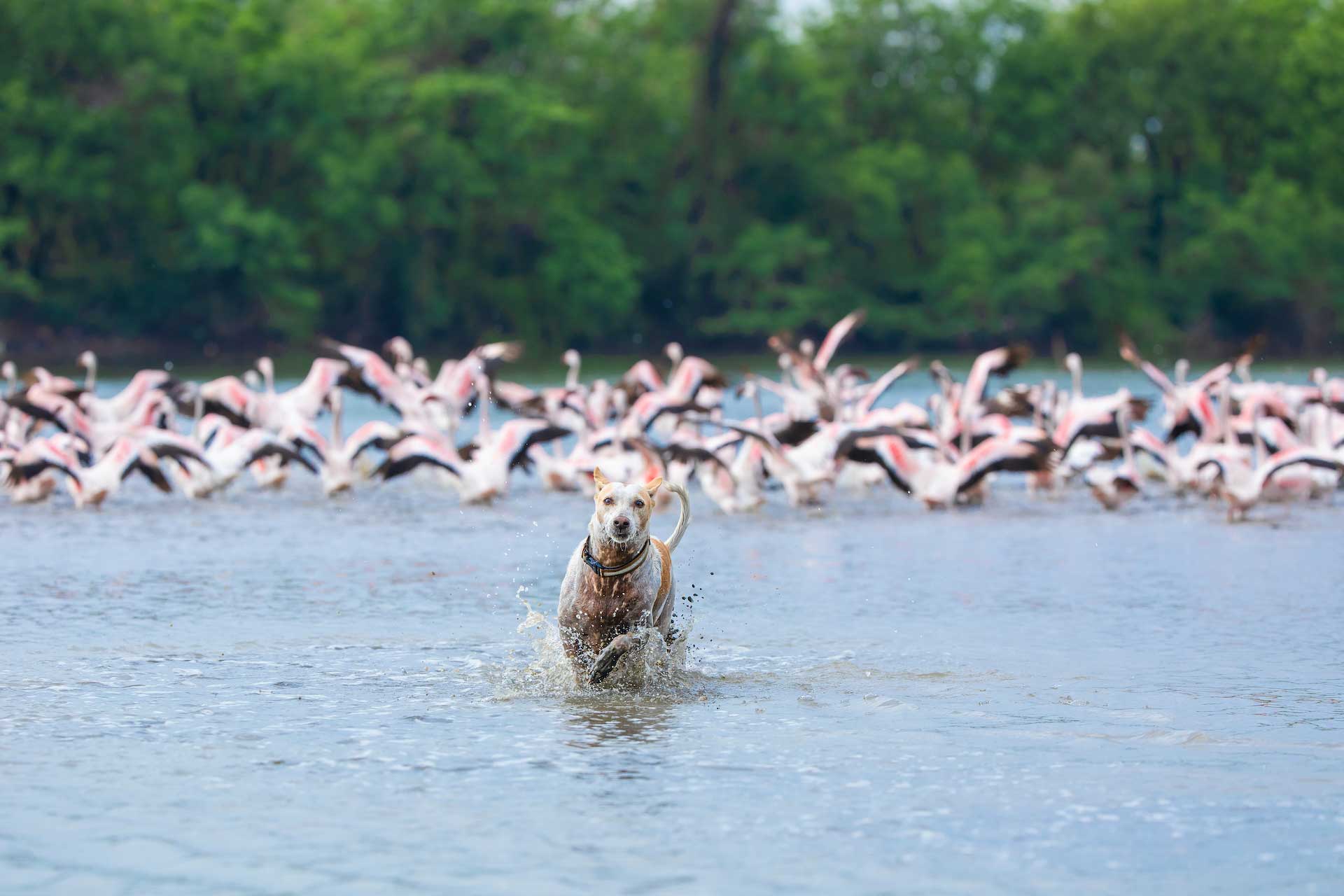 A dog charges towards lesser flamingos at DPS Lake, Navi Mumbai. The collared dog seems to be a spayed female who nearby residents feed. Photographer Kenneth Lawrence tried to distract her from attacking the birds by whistling. The strategy worked temporarily. In the last few images, she is running towards the whistling call. Then, the dog attempted another chase and then left the lake. She’s been seen there on multiple occasions and is a regular at DPS. Photos: Kenneth Lawrence

“Disease threat is a major risk because it can take out larger populations [at once, rather] than direct attacks [by dogs]. We have documented CDV [canine distemper virus] prevalence in dogs across India and jackals, foxes and wolves as well,” says Vanak. Vanak’s paper (2009) in Mammal Review shows that diseases like rabies and CDV have resulted in “severe population decline in several endangered carnivores coexisting with high-density dog populations”.

India deals with the threat posed by dogs to wildlife via the “neuter and release policy” under the Animal Birth Control (Dogs) Rules (ABC), 2001. This aims to sterilise and immunise street dogs. The Ministry of Culture under Menaka Gandhi, the then minister, notified this policy under the Prevention of Cruelty to Animals Act (PCA), 1960. So, a ministry charged with preserving art and culture in India wrote a policy for dog control. In brief, the ministry was neither equipped with relevant expertise nor the appropriate mandate to draft rules that, according to experts, stand in the way of wildlife conservation.

The Animal Birth Control Rules broadly call for immunisation and sterilisation of street dogs. It may be noted that these ABC Rules are also not in line with the Prevention of Cruelty to Animals Act, its parent legislation. The Act uses the term “stray dogs” and calls for their removal from the streets, permanent sheltering or humane euthanasia “because it considers dogs on the road as a condition which inflicts cruelty,” Uniyal says. On the other hand, the ABC Rules recognise street dogs as a separate category, sealing their fate to life on the streets, which is harsh to the dogs and wildlife. This is to say nothing about India’s having one of the highest numbers of dog bite cases and dog-mediated human rabies deaths every year.

The biggest criticism of the ABC Rules is that it doesn’t go far enough to mitigate wildlife deaths and injuries caused by dogs. “It is disingenuous to say that neutering is a solution because it doesn’t stop predation,” said Meghna Uniyal, Director and co-founder, Humane Foundation for People and Animals. 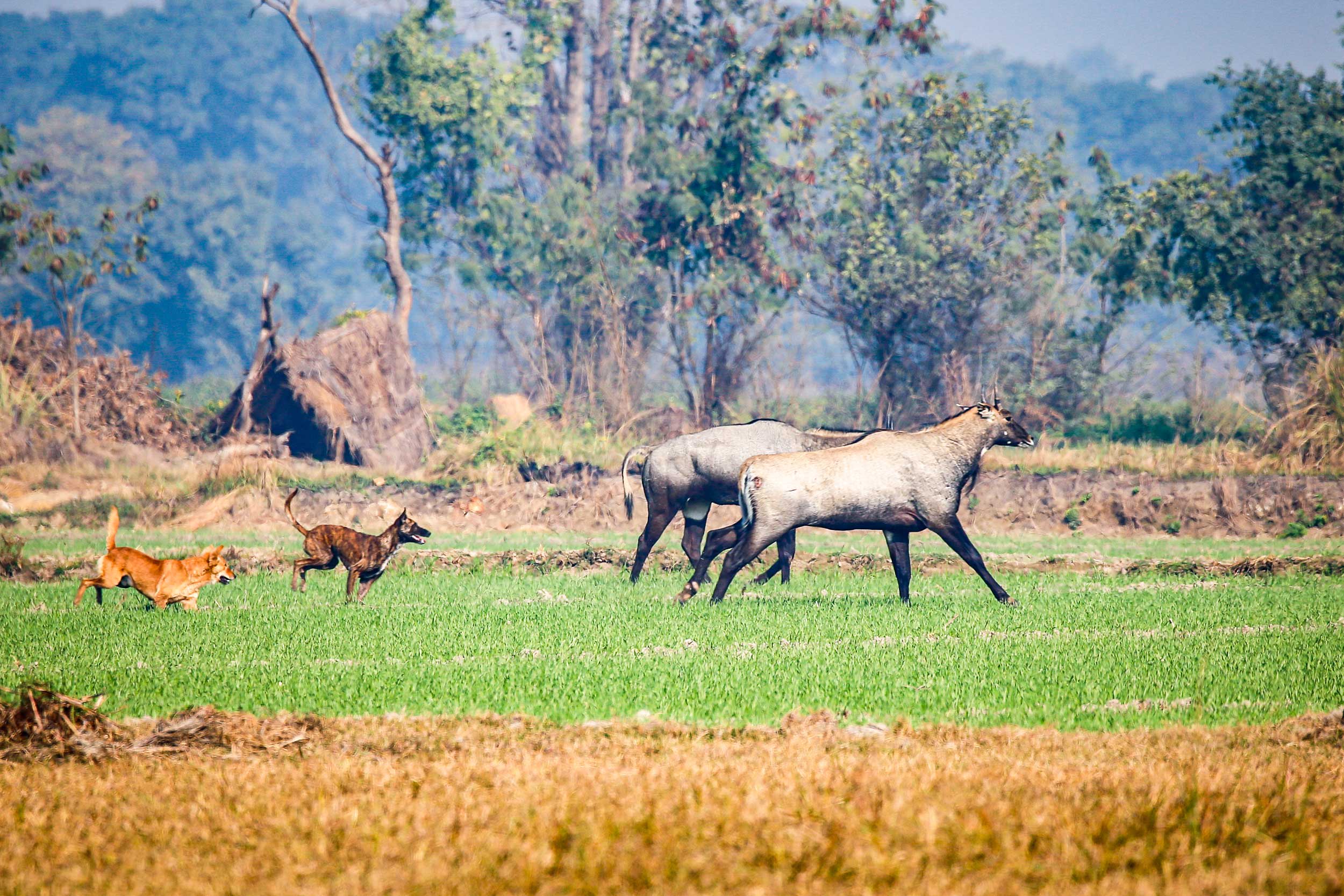 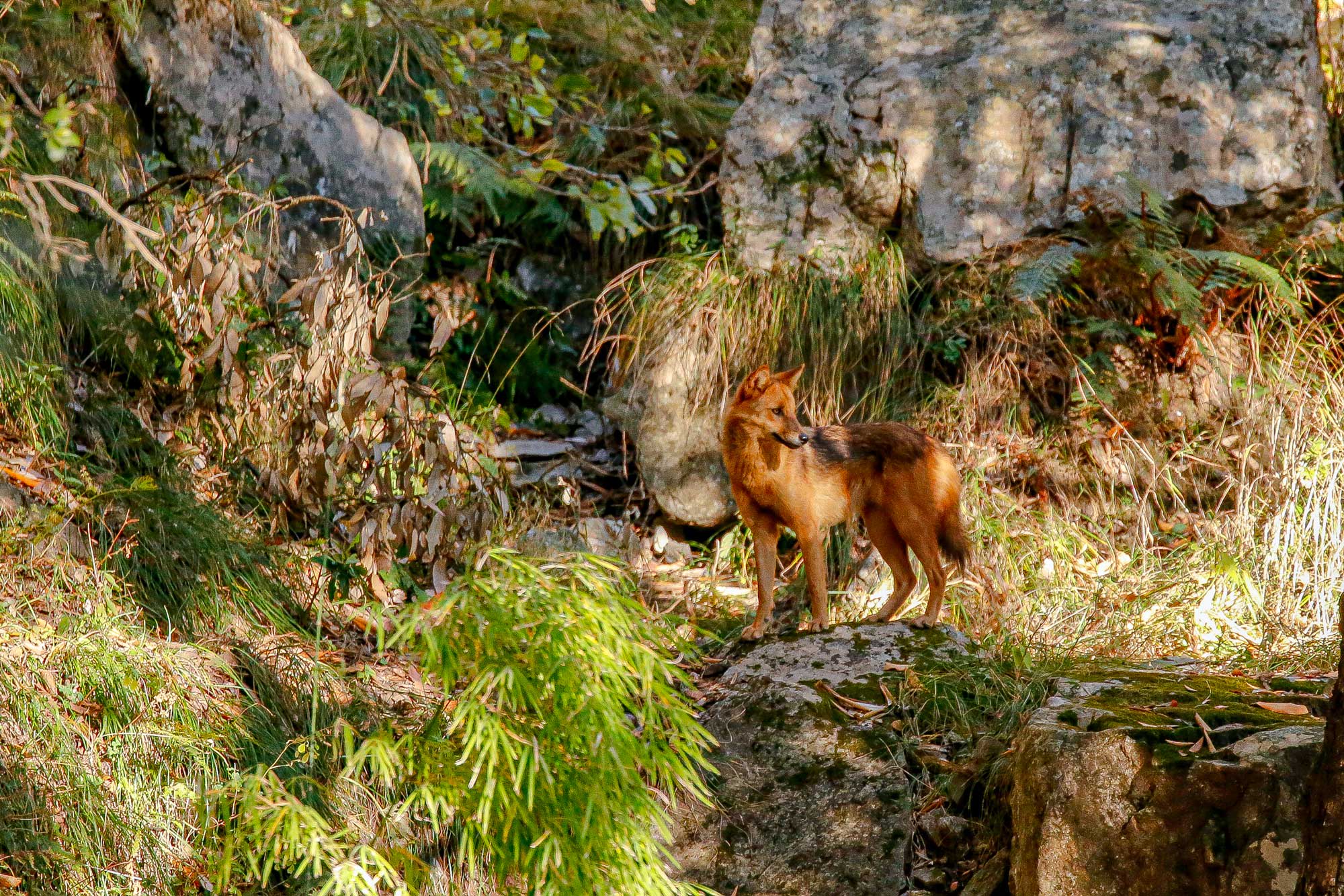 (Left) Free-ranging dogs are chasing two antelopes. (Right) A tawny jackal seen near Sattal, Nainital, Uttarakhand. Although the pelt colour is variable from cream to tawny, this deep shade is unusual. Since the jackal’s muzzle looks slightly different, there may be some hybridisation between domestic/free-ranging dogs and jackals. This similar pelage colour change has been noticed in wolves due to hybridisation and is also recorded in jackals. Photos: Saurabh Sawant

Priya Singh, a wildlife biologist, agrees, “Even after you spay and sterilise them, dogs continue to live for as long as they live and will continue to attack wildlife,” she points out. But despite such obvious flaws in the neuter and release policy, it was adopted by the National Tiger Conservation Authority (NTCA).

In December 2020, the NTCA released a Standard Operating Procedure, which calls for the sterilisation and release of dogs into “suitable alternate sites” to deal with threats like direct predation and the spread of diseases in tiger reserves across the country. And so, a flawed policy is now the official manner in which India manages the various threats dogs pose to wildlife.

Wild Life Protection Act or Animal Birth Control Rules?
Under the Wildlife Protection Act (WLPA), forest departments are mandated to protect wildlife and remove threats to them, including threats from dogs in and around PAs and wherever else wildlife may be found. The ABC Rules are subordinate legislation under the Prevention of Cruelty Act that cannot overrule other laws like WLPA, which are primarily for wildlife conservation.

“Has the National Tiger Conservation Authority Ministry of Environment, Forests and Climate Change given up on the Wild Life Protection Act?” Uniyal asks.

(Top) A flock of Eurasian griffons (or Griffon vultures) being chased by free-ranging dogs as they all feed on carcasses in Jorbeed, Rajasthan. (Above) Increasing interactions between the Indian wolf with free-ranging dogs is a big concern. This encounter was witnessed on the outskirts of Pune city. Although wolves chased away the dog, the risk of disease transmission is very high in such situations. Open wounds on the dog’s back reveal two bites inflicted by the alpha male. Videos: Saurabh Sawant (top), Ashwin Gokhale/The Grasslands Trust (above)

Path ahead
To ensure that the threats to wildlife are addressed, Singh says that we need “responsible pet ownership”. This means people should be responsible for ensuring that their pet dogs are not a threat to local wildlife. This responsibility extends to pet cats as well as they too pose a threat to wildlife; they are efficient hunters and have litters more frequently than dogs. “Responsible pet ownership” also includes the adoption of stray dogs and enabling adoption by local animal shelters.

More importantly, India needs a standardised policy to deal with threats to wildlife posed by domesticated species like dogs and cats because what we have at present is, at best, a half-measure. Uniyal explains that India needs to implement WHO guidelines for dog population management that clearly mandate removal — adoption, sheltering, and euthanasia — of stray and unwanted dogs and licensing and promotion of responsible pet ownership.

Even the International Union for Conservation of Nature (IUCN) lists dogs in the Global Invasive Species Database as a species that negatively impacts biodiversity and mandates their exclusion from spaces meant for wildlife conservation. 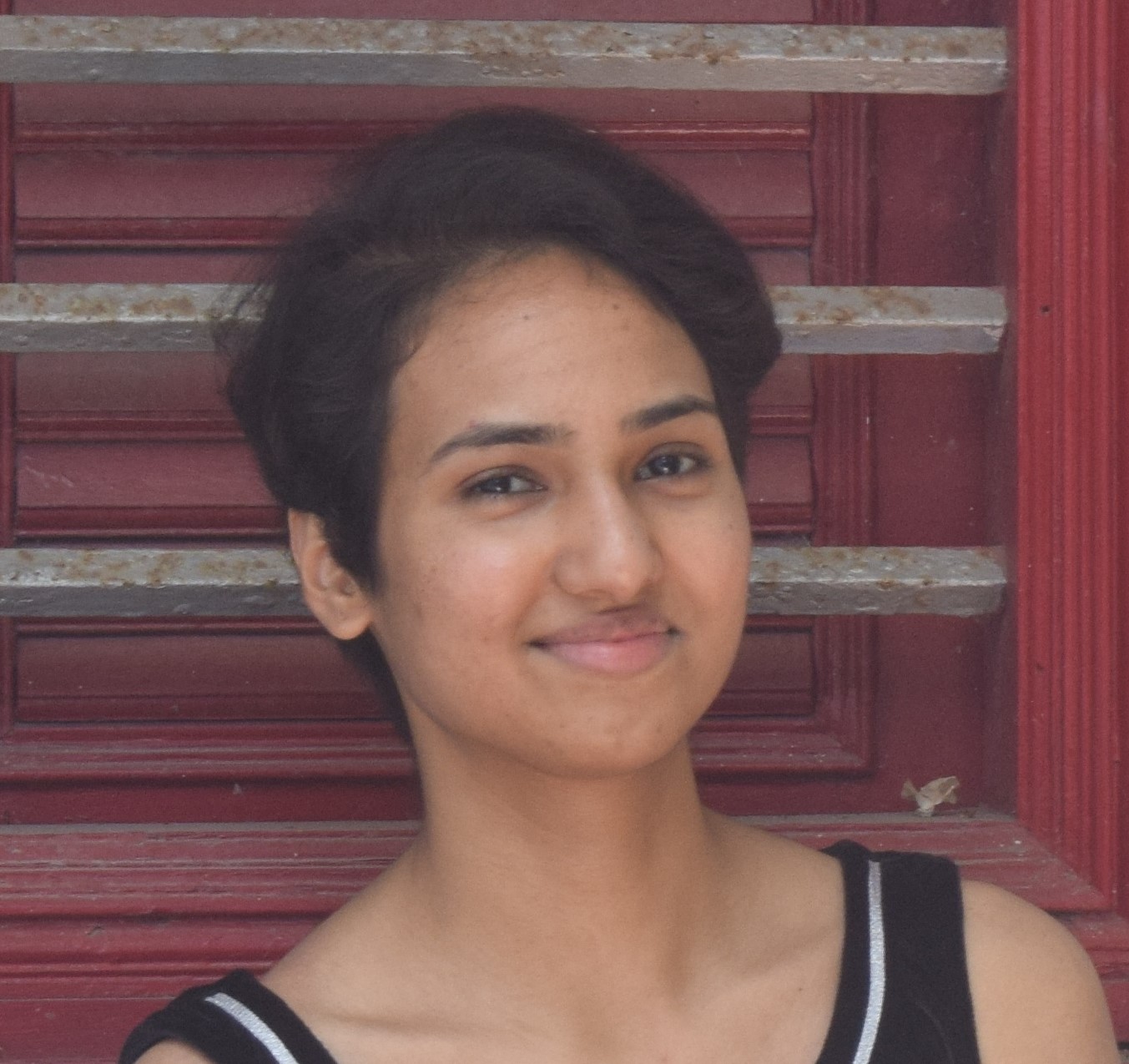 is a journalist who covers forests and wildlife.