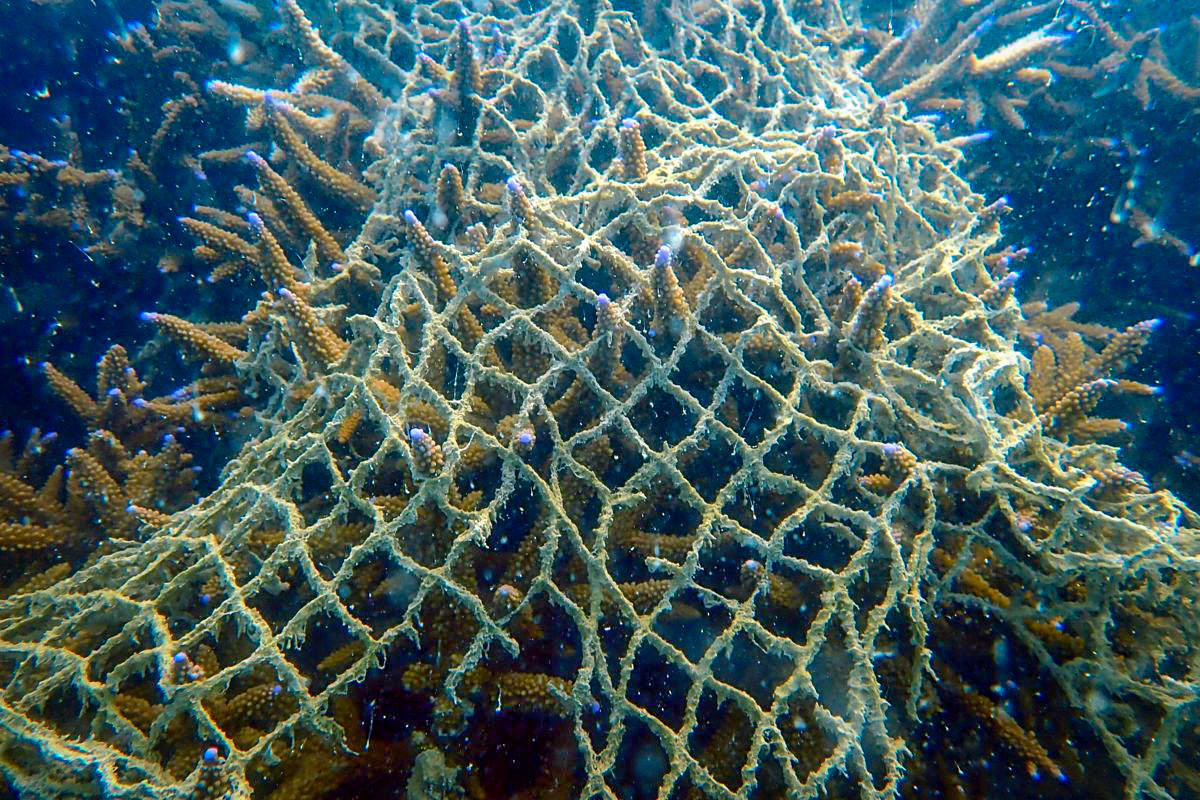 Dive into the clear, shallow waters of the Gulf of Mannar and you’d be met with more than a hundred species of corals. Among these vivid corals of varying shapes and sizes live thousands of reef-fish that locals depend on for food and income. However, corals in some parts of this narrow strip of ocean separating the south Indian state of Tamil Nadu from Sri Lanka now don some very odd-looking ornaments. Ghost nets (as abandoned fishing nets are called) envelop the finger-like branches of some, while torn lines, ropes and discarded plastic fish traps are littered on others. Around 1,150 square metres of reefs in the Gulf are covered in marine debris. That amounts to a very small portion of coral cover in the Gulf, but that hasn’t stopped researchers from raising concerns about the threat it poses to the waters biodiversity.

Corals of the Gulf
Threats are aplenty for corals in the Gulf of Mannar. To start, coral reefs worldwide feel the impact of the change in climate since anthropogenic global warming – the human-caused heating up of the earth’s atmosphere – warms up the sea too. And when sea surface temperatures increase in such cases, corals become stressed. They lose their (often brilliant) colours and appear ghostly white, or “bleached”. If the water temperatures stay high for several days at a stretch, bleached corals can die.

Natural threats – such as coral-feasting fish and sponges, and diseases (such as the pink spot disease, a larval infection that makes corals more susceptible to being eaten by fish) are not uncommon either. But most other threats, like climate change, are anthropogenic. Polluted water (domestic as well as industrial waste), is one of them, as are destructive fishing practices. The shallow waters of the Gulf are important hunting grounds for small-scale fishers; the anchors of the boats they use can damage reefs. Often, fishing nets get entangled in coral, breaking coral branches. Fishers usually abandon such marine debris where they are as they cannot retrieve them without damaging their nets.

Nets, traps and lines
In the Gulf of Mannar, which is one of India’s only four major coral reef formations, marine debris has been turning up on corals for some time now, recollects Diraviya Raj of the Suganthi Devadason Marine Research Institute in Thoothukudi. The Institute’s scientists have been studying these reefs since the 2000s.

“But over the last decade, we noticed that marine debris has been increasing,” said Raj.

To quantify its prevalence, a team including Raj, led by the institute’s director Patterson Edward, surveyed all 21 coral islands in the Gulf in 2018-19. In their diving and snorkel surveys, they found that ghost nets, fishing traps, ropes, lines and other debris were indeed present in some patches. These marine debris swathed both live and dead coral colonies; and more than 40 per cent of all debris were ghost nets. Vilanguchalli and Kariyachalli, small coral islands just off Thoothukudi city, recorded the highest prevalence of ghost nets: around 60 per cent of marine debris here consisted of ghost nets alone. Other small islands in this area also showed higher levels of marine debris.

Changing fishing practices
What is causing marine debris, and why are islands closer to Thoothukudi bearing the brunt? That could be because human population has increased near the city – and in turn, the pressure on fish resources – said Patterson Edward. As per the last Census of India (2011), the population of Ramanathapuram district (one of the two coastal districts that border the Gulf of Mannar) alone recorded a growth of 14 per cent in ten years.

The fishing industry here has changed too, explained Raj. Like in many other coastal areas in the country, yields from the ocean have started decreasing over the past few decades, while prices have increased. Fishing is now a far more lucrative industry: most of the catch is exported. This in turn has increased fishing, and the pressure on the Gulf’s fish resources, he said.

“The use of plastics in fishing has also increased significantly in recent times. Even traditional fishing traps that have been in use for several decades now are no longer made of bamboo but plastic,” he said.

However, of the total 16,685 square metres of coral reefs the team surveyed, only 1152 square metres were afflicted with marine debris: an area far smaller than the size of a football field. However, it’s not about area but impact, said Raj.

A fishing trap lodged in corals in the waters of the Gulf of Mannar. Photo courtesy: SDMRI

Marine debris damages corals by causing injuries, or tissue damage. It can also fragment or break corals apart. Some coral genera are more prone to this, and ghost nets tend to do most harm. Raj and his colleages, for instance, found that in the Gulf, acroporids – corals of the genus Acropora, that have delicate, finger-like branches – faced the most amount of fragmentation when they came in contact with marine debris. Corals on almost all islands they surveyed for the study faced both tissue loss and fragmentation.

Such structural damage to corals can make them more prone to diseases. Scientists who studied almost 160 coral reefs in the Asia-Pacific in 2018 found that the likelihood of disease increased from 4% to 89% when corals came in contact with plastic.

Effects on coral resilience
Most importantly, such injuries and fragmentation also affect corals’ abilities to fight back and revive after climate change-associated set-backs. The coral reefs off Thoothukudi, for instance (where ghost nets dominated marine debris) are among the most resilient patches in the Gulf, said Patterson Edward. They had revived well after consecutive bleaching events. So tackling the issue of marine debris and especially ghost nets – in time, and well – could be crucial in retaining coral resilience here, according to Edward.

Marine debris appears to be emerging as a threat in some of India’s other reefs too. Debris has certainly increased in Lakshadweep, wrote scientist Rohan Arthur, in an e-mail. Arthur, who has been studying these reefs in the Arabian Sea for more than two decades now, said that he began monitoring marine debris only recently, for he did not see it as a major problem even five years ago. Here too, like in the SDMRI study, the majority of debris is in the form of abandoned nets and entangled fishing lines; along a gradient of urbanisation, there are also other debris that increase (such as lost cement bags, construction material and plastic bags), he wrote. But the amount of direct damage this may do in the Lakshadweep is likely to be small, he noted.

“What is more worrying is what it represents,” he added. “It represents exactly how wide the footprint of the commercial fishery is.”

It is a very good indicator of how sharply reef fishing has increased in reefs like the Lakshadweep, he wrote. “What is astonishing here is that, even in the most remote atolls of the archipelago, including the uninhabited atolls, these abandoned signs of fishing are rife.”

Tackling debris
One of the first steps in tackling marine debris is knowing more about it. In 2016, in his commentary on marine debris, A. Arun Kumar pointed out how the characteristics of marine debris, its accumulation and transport pathways along India’s coastline are poorly studied. Four years later, not much has changed. While individuals and non-governmental organisations are studying this in one-off projects, or clearing marine debris when they can, there is no sustained, large-scale effort to monitor it in India, said Kumar. The lack of a standardised procedure to quantify it makes it impossible to compare debris levels across the country and world too.

“Incentivising the collection of used fishing nets could be one way to tackle marine debris,” he said. “That is being successfully implemented in the Philippines where marine debris is a worry.”

Currently, there are no such incentives available, says 63-year-old N. Antony Raj, a resident of Vellapatti village in Ramanathapuram district who has been fishing in the Gulf all his life. He agrees that ghost nets are a problem now, but feels there’s very little that fishers can do to tackle the issue. Ultimately, could such marine debris affect his catch? He’s not sure about the future but there are more proximate side effects.

“Ghost nets do trap fish sometimes and during the time they decay underwater, that area is not used by other fish much,” he says. “This affects catch temporarily.”