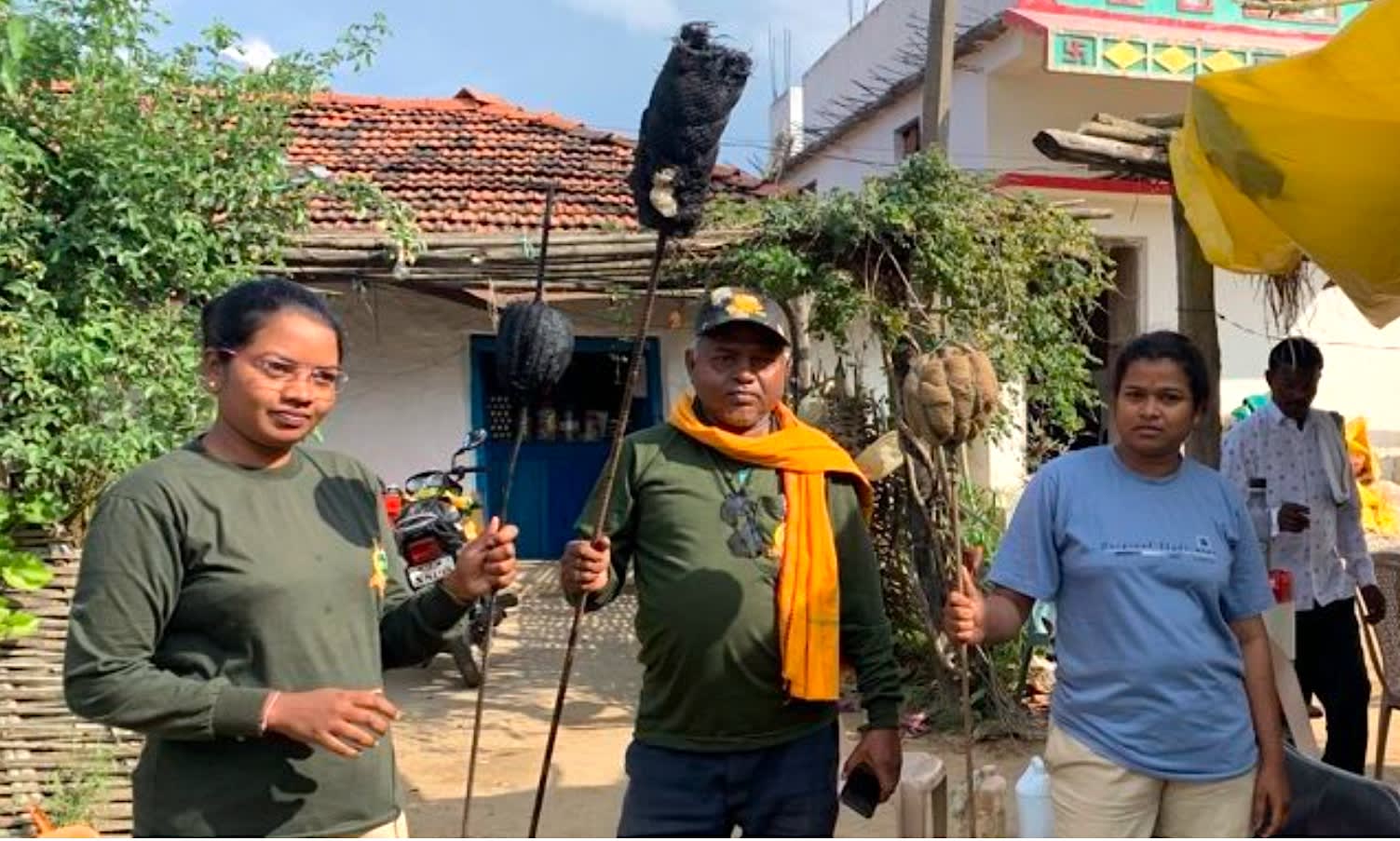 Maharashtra’s eastern district of Gadchiroli, which has dense forest cover, had new visitors last month. A group of wild elephants from neighbouring Chhattisgarh migrated across the border in mid-October. It has been over a month now and these elephants have been exploring forests in the central parts of Gadchiroli. Good quality food, adequate water availability and the fact that Gadchiroli forests are less-disturbed than those in Chhattisgarh, appear to be major reasons for these elephants to be comfortable in Gadchiroli and not return to Chhattisgarh. Forest officials and experts say if this herd of elephants does not travel back to Chhattisgarh by March next year, it is likely to stay on in the Gadchiroli forests permanently. This in turn would make Gadchiroli a new elephant area.

The herd of around 18-22 wild elephants was seen in Kanhargaon Tola village, which is 25 km from the Chhattisgarh border, in the third week of October. The local people were shocked and panicked. However, these elephants neither attacked any humans nor ate standing crops, though they did damage some farms as they moved through them. “Two years ago, elephants were seen in Gadchiroli near Chhattisgarh border. But they returned in two to three days. Now they have come quite inside the Gadchiroli forests,” said  Kishor Mankar, conservator of forests, Gadchiroli Circle.

Leaves of green bamboo, green grass, chironji (Cuddapah almond/Buchanania lanzan) and adequate amount of water resources in the form of undisturbed ponds seem to be the major reason why these elephants are staying on in Gadhchiroli and not returning to the Chhattisgarh forests that have been disturbed due to mining activities, Mankar added. “We are in contact with forest departments in Chhattisgarh and Odisha to track this herd’s past movement and understand the reasons for its migration,” he said.

Forest staff in Maharashtra is constantly monitoring the movement of this herd that has been in different forest ranges after staying for two weeks in Dhanora South and Murumgaon East ranges in the eastern part of Maharashtra. S. R. Kumaraswamy, deputy conservator of forests, Gadchiroli Division, said the herd has been avoiding humans and going close to villages only during night hours to access water bodies. “Locals have shown great restrain and they are cooperating with us in monitoring the movement of these elephants. We have also held awareness programmes and paid compensation for crop damages,” he said.

Elephants peaceful so far, locals taking precautions
While the elephants have preferred to stay away from human settlements so far, villagers are taking precautionary measures. Sumanbai Naitam who lives in Kanhargaon Tola said she never saw elephants but the idea of them coming inside the village scares her. “We have stopped going inside the forests, and ensure we do not go far away from our houses after the dark.”

Another villager Basantibai Naitam said that people have started sleeping on terraces of concrete houses as the mud houses may collapse if elephants try to make their way inside the village. “Forest department has provided blankets to villagers so they can sleep comfortably on the open terraces in the winter,” added R. S. Kokulwar, forest round officer, who is a part of the 30-member team that has been monitoring elephants since they first appeared in Gadchiroli.

Forest guards A. S. Gedam and M. E. Mhaske are part of the team that has to report the latest locations of elephants and survey the extent of farm damages caused by elephants’ movement. “Elephants are not eating crops but their movement through farms to reach water bodies does cause damages,” they said.

Prabhu Achla from Sindesur village said he can hear trumpets of elephants until six in the morning. “We have stopped taking cattle for grazing inside the forest. If we do take the cattle inside to areas where elephants are not present, we  we still come back by four in the afternoon. But the trumpets heard at night make us little worried,” he said. The forest department has roped in the Stripes And Green Earth (SAGE) Foundation from West Bengal to prepare an action plan to address potential human-animal conflict. Volunteers of the SAGE Foundation trained villagers on how to act in case elephants attack and how to drive them away using a special type of flambeau.

Unlike other herds that have previously migrated from Chhattisgarh to Madhya Pradesh, these elephants have remained peaceful, which makes it easier for this herd to stay in Gadchiroli permanently, observes the SAGE Foundation team led by wildlife expert Sagnik Sengupta. “These elephants have migrated to Gadchiroli in search of food and water and also possibly due to the disturbances in Chhattisgarh. The herd is on a constant move. So we do not know if they stay or migrate to Chhattisgarh,” said Sengupta. “Undisturbed forests, availability of food are reasons they may stay back. In case, they do not go back to Chhattisgarh by March, there is a high possibility they make Gadchiroli their permanent home.”

However, local wildlife expert Suresh Chopne said Gadchiroli and surrounding areas have been a elephant habitat for ages. “You can see elephants having embedded in the local culture and emblems of local kingdoms here. There are favourable conditions for elephants to live here,” Chopne said. “If this herd stays in Gadchiroli forests for over a year and manages the hot and dry conditions during the summers, there is a high possibility that Gadchiroli becomes a viable habitat for elephants.” Additionally, a research study by Wildlife Research and Conservation Society maintained that elephants have been making forays into Gadchiroli and surrounding forests but they never became residents.

The forest department is planning to radio-collar some of the elephants in the group and build solar-run water pumps to ensure water availability in summers if elephants show indications of staying in Gadchiroli for a longer time. The forest department as well as environment enthusiasts in the region appear hopeful about Gadchiroli becoming an elephant habitat. However, along with the excitement is concern of human-animal conflict. “Although this herd has appeared peaceful and harmless so far, we are monitoring them closely and preparing an action plan to deal with them if they decide to stay here,” said Gadchiroli DCF Kumaraswamy.