An eco-sensitive zone around the sanctuary with some stretches only 100 metres wide is inadequate, say wildlife experts 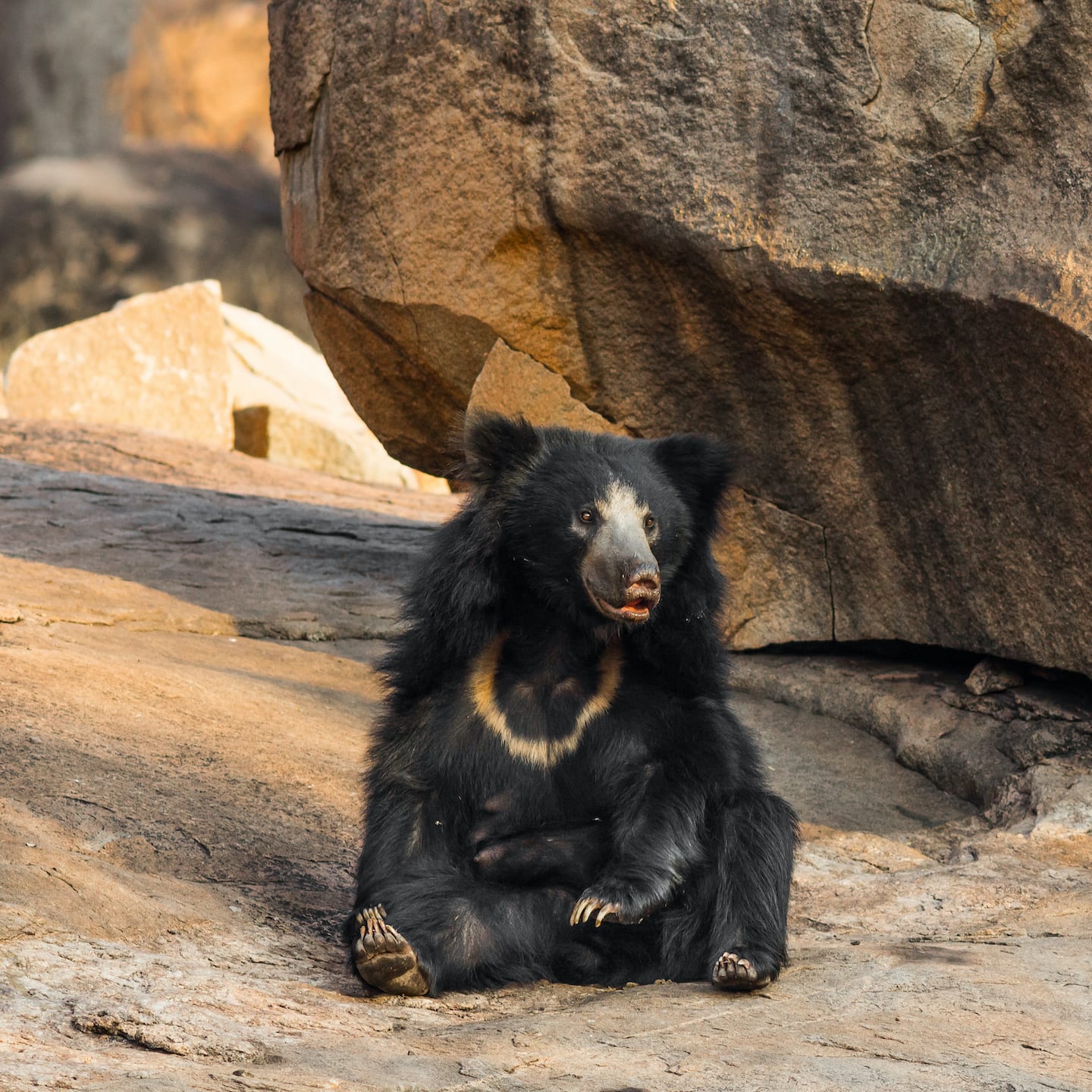 On November 11, 2020, the Union Ministry of Environment Forests and Climate Change notified the limits of an Eco-Sensitive Zone (ESZ) around the Mount Abu Wildlife Sanctuary in Rajasthan, bordering the state of Gujarat. An ESZ is meant to serve as a “shock absorber” between the sanctuary and its adjoining areas, protecting the animals and restricting human activity close to the sanctuary.

The ESZ notified in November 2020, extends 6.08 km at its longest stretch, to the southwest, where sloth bears move between the two states through a corridor connecting Rajasthan’s Mount Abu WLS and Gujarat’s Jessore Sloth Bear Sanctuary. At its narrowest, the ESZ is just 100 metres – this stretch was made so narrow because construction had already occurred towards the sanctuary’s southeast. Large resorts have come up close to the edge of the sanctuary.

Managing corridors is crucial to the conservation of bears even as experts fear the ESZ with “regulated” construction activities will hamper preservation of the already whittled down zone.

At least ten protected areas (PAs) in Rajasthan, including Mount Abu WLS, are home to the mid-sized bear species noted for its distinctive shaggy black coat. Outside the PAs, as many as 13 administrative divisions of the state’s forest department hold sloth bear populations, according to a 2013 paper. The desert region of Rajasthan limits the species’ western distribution in India, where it ranges from the southern tip of the Western Ghats mountains to the Himalayas’ foothills. The sloth bear is endemic to the Indian subcontinent.

V.S. Pandey, Deputy Conservator of Forests of the Mount Abu WLS, acknowledges that the extent of the ESZ is only 100 metres in the southeast. “Even so, in areas that are under the forest department but fall outside the ESZ, the conservation of wildlife will continue as before. The animals are found in Nimbaj and Asava taluks, and it is true that these areas do not fall under the ESZ.”

Once an area is declared an ESZ, commercial activity is prohibited. There is speculation that lobbying by those who had already constructed in the area led to shrinking the ESZ towards the southeast. In April 2016, a draft ESZ notification showed zero km ESZ in some stretches, raising the hackles of environmentalists. Several rounds of negotiation followed. A draft was open for public comments for two months, and among those submitting objections was Rustom Cama, whose farmlands adjoin the sanctuary.
Cama pointed out that land-use change from agriculture to commercial and colony construction had occurred even as the ESZ was pending notification. This is in contravention of the law, he wrote in his response to the draft, adding that post facto de-notification of the land would reward those who had acted illegally. Manoj Mishra, who has served as an officer of the Indian Forest Service, agrees with Cama. “Construction, while a notification is pending, is wrong,” he said.

The final notification provides for a range of activities within the slim ESZ that would erode the protection offered to the sanctuary – construction is not entirely prohibited and is listed as a “regulated” activity, allowing small scale industries that do not cause pollution. The erection of electrical and communication towers, too, is permitted as a “regulated” activity. There is also provision made for commercial extraction of surface and groundwater as a regulated activity.

Widening of roads and construction of new roads – all this is permissible within the ESZ. Even a petrol pump can be installed if the ESZ monitoring committee grants permission. This range of commercial activity would not leave much scope for a well-preserved ESZ, experts fear.

The ecosensitive zone (in yellow) around Mount Abu Wildlife Sanctuary. Map from government notification. Cover photo: Managing corridors is crucial to the bears’ conservation even as experts fear the ESZ with “regulated” construction activities will hamper preservation of the already whittled down zone. Cover photo: Rudraksha Chodankar, CC BY-SA 4.0

Sloth bears descend when it gets cold and move into the plains. The Jessore Sloth Bear Sanctuary in Gujarat is just about 10 km from the southern edge of Mount Abu and bears routinely use this corridor across the two states. A census in 2016 estimated the bear population in this region, comprising the two sanctuaries, to be 350. More bears were found in Mount Abu than in the sloth bear sanctuary in Gujarat.

Prachi Thatte of the National Centre for Biological Sciences, Bengaluru, is currently researching the connectivity of sloth bears in the southern Aravallis. “We carried out sampling in this corridor (Mount Abu to Jessore) and found sloth bear use. This is an important corridor connecting two high-density populations of sloth bears,” she said, welcoming the notification. However, she noted that an important corridor connecting Mount Abu to the Kumbhalgarh Wildlife Sanctuary to the north has not been offered such protection. “This corridor runs from the north-western tip of Mount Abu along the eastern ridges of Sirohi and Shivganj taluks to the southern part of Kumbhalgarh.”

The corridor towards Kumbhalgarh is especially important as National Highway 27 to the east of the sanctuary is likely to impact the bears’ movement, she said. “We found sloth bear evidence in several beats of Sirohi forest division, especially to the north-western and northern side of the sanctuary.”

Thatte, in a paper co-authored with six other scientists in the journal Diversity and Distributions, in December 2019, showed that maintaining connectivity is vital to the conservation and management of endangered species. “For long term persistence, areas that facilitate dispersal of multiple species need to be protected,” the paper notes.

The Jessore sanctuary’s northern boundary coincides with the boundary of Gujarat state, so it was up to Rajasthan to provide the corridor for the bears. The ESZ extends 6.08 km to the south-west, covering some part of the area that sloth bears frequent; although this length seems a good distance, it extends only over a narrow neck of the hills.

Though the Mount Abu WLS-Jessore corridor is mentioned in the ESZ notification, it does not have any legal protection. The bears, nocturnal creatures, do not usually come into conflict with human populations. Yet, they can be ferocious when there are cubs. Arun Sharma, resident of Mount Abu town and a physician, has memories of once having stitched the wounds of a woman who survived a bear attack.

Sharma, who was part of the first government-appointed committee to monitor the ESZ, said this is the first time a corridor has been recognised for the sloth bear. “We have earlier only had elephant and tiger corridors. Mount Abu should now be out of bounds for any new construction. Only repair of the older structures and small construction for residents should be allowed. Construction should not occur even in the guise of providing health infrastructure or for spiritual purposes.”

In 1937, the spiritual order of the Brahma Kumaris was founded, with its headquarters at Mount Abu. This has increased construction activity, and the group has faced accusations of encroaching on forest land. Forest officials have confided to this reporter that action against the Brahma Kumaris is challenging, given how well connected they are politically. The group has also constructed a modern and well-equipped hospital, which has earned it goodwill in the town.

In recent years, with increasing encroachment of wildlife habitat, human-animal conflict has caused deaths. In March 2017, three people were killed by a female bear in Gujarat; just days later, a lactating mother bear was shot dead by local people. In December that year, however, the ESZ around the Jessore Sloth Bear Sanctuary was reduced.

Wildlife is sometimes impacted by state policy in other domains too. For example, Gujarat has had a prohibition law since 1949. (Gujarat became a separate state in 1960. The Bombay Prohibition Act, 1949 applied here.) In 2018, however, the rules were made even more stringent, providing for up to 10 years in jail for alcohol purchase.

Residents of Gujarat have been known to travel outside state boundaries to enjoy a drink without the fear of imprisonment. With Mount Abu at close proximity, thousands visit for a weekend getaway, which is increasing the pressure on the hill station’s wildlife. The area of the town outside the ESZ, is visited by about 1.5 million tourists each year. There is increasing pressure on land, and the government too is forced to allow construction.

G.V. Reddy, who retired as head of the forest department of Rajasthan in October this year, said, “The ESZ should truly be a buffer, providing a safety zone between highly dense human population areas and wildlife areas. If the buffer zone is a mere paper exercise, the purpose may not be fulfilled.”

The Jessore Sloth Bear Sanctuary in Gujarat is just about 10 km from the southern edge of Mount Abu, and bears routinely use this corridor across the two states (Rajasthan and Gujarat). Representational image from Daroji Sloth Bear Sanctuary. Photo: RealityImages/Shutterstock