Seen as dangerous predators and banished from most of their original habitats, marsh crocodiles suffer a perilous existence in India today 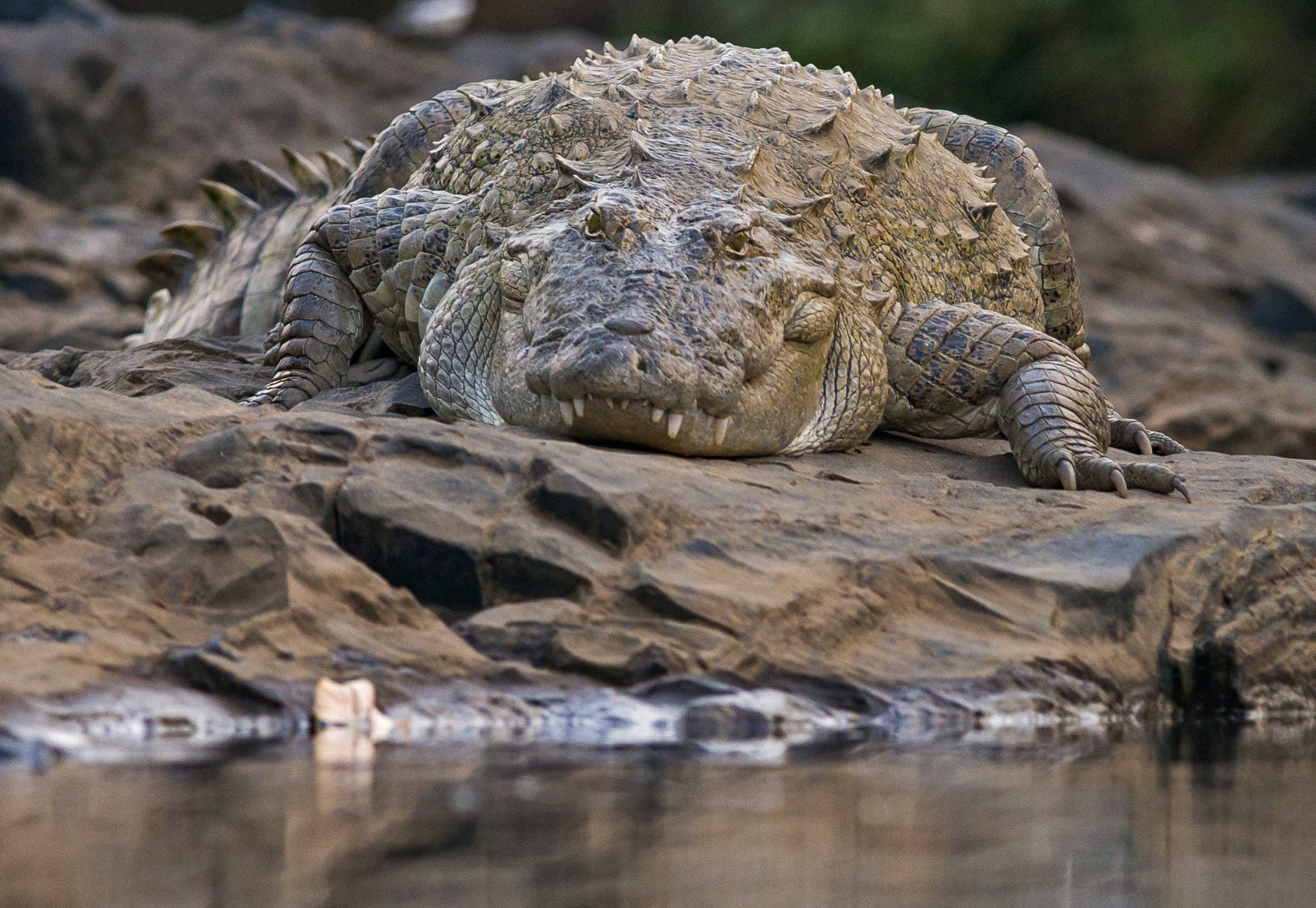 From man-eating river monster to valuable apex predator and from divine vehicle to poached victim, the Indian freshwater or marsh crocodile (Crocodylus palustris) is all of these and more. Despite the reverence afforded to the mugger as the vehicle of the river goddess Ganga, like many other predators and large animals that get into conflict with humans, this species has a complex relationship with us.

My first experience with a mugger was in my early teens, when I found a juvenile, about 50 cm long, with a head injury. I brought it home and kept it for almost a year before letting it go again. In those days nobody knew any better. What I did learn from that little croc was that they are incredibly perceptive to voices, distinguishing between my voice (the one that fed it) and the voices of other people. And they get used to routine very quickly and are trainable!

Muggers live in freshwater habitats such as rivers, lakes, streams, and ponds. They don’t naturally live in coastal saltwater lagoons and human-made reservoirs but are now found in some due to human intervention. Photo: Dhritiman Mukherjee Cover Photo: The marsh crocodile or mugger has the widest snout among all species of crocodiles. An adult male can grow up to 4.5 m and weigh up to 450 kg. Cover Photo: Dhritiman Mukherjee

As a child, I’d seen dozens of muggers at the Ranganathittu Bird Sanctuary and naively believed the boat drivers who said they were terribly dangerous and would bite off your hand if you held it over the water. This couldn’t be further from the truth, and it didn’t stop me from keeping one at home.

Mugger crocodiles, although credited with numerous deaths, aren’t as dangerous as many other species that grow as large or hunt more aggressively. CrocBITE, the international crocodilian attack database, places the Indian marsh crocodile third in the list of crocs involved in conflict, after the saltwater crocodile (Crocodylus porosus) and the Nile crocodile (Crocodylus niloticus). However, this isn’t indicative of the affinity that the species might have for attacking humans. Instead, it includes a host of other variables. For instance, the mugger occurs in a region with one of the highest human population densities in the world and most of these people live in close proximity and share waterbodies with crocodiles. Some level of conflict is inevitable!

With fewer than 500 mugger attacks being documented on this comprehensive site, 2019 saw under 50 attacks, both lethal and non-lethal in India. These are not the numbers you would expect from a dangerous animal that lives alongside millions of humans.

A few years after I had released that first crocodile, I found myself on a bus, heading to the Madras Crocodile Bank Trust to try and convince the legendary Rom Whitaker to allow me, a high school dropout, to work for him. It worked! And soon, I was working with over 3,000 reptiles every day! Most of these reptiles were muggers; results of a tremendously successful captive breeding effort, an ex-situ conservation endeavour from the late 1970s. In fact, the program was so successful that all the breeding centres ended up with more crocodiles than could be released. Thanks to India’s population galloping toward a billion people, there was no place left to release these animals. Banks of rivers and other wetlands were now rice fields or used for agriculture and livestock. Besides, most rivers had been dammed and the reservoirs were now stocked with “food fish”. Muggers in these reservoirs were a problem to the fisherfolk. The other issue with reservoirs is that due to the fluctuation of water levels there is very little vegetation on the edge for much of the year. This makes it difficult for baby crocs to find safe cover.

Though this mugger has a checkered keelback water snake between its jaws, it prefers to feed on fish. But when the occasion arises, the opportunistic predator doesn’t hesitate to grab snakes, birds, and mammals. Photo: Dhritiman Mukherjee

Prior to the Wildlife Protection Act of 1972, muggers and a host of other reptiles were victims of unregulated killing for skin, meat, and other body parts. Nests were raided for eggs and young were often killed. Rom Whitaker and a handful of pioneering conservationists ensured the survival of this and numerous other reptile species.

Compared to most other large crocodile species, the mugger is relatively peaceful and rarely does any real trouble spring up between individuals of this species. In Sri Lanka, there are locations where dozens of muggers cohabit small wetlands and stretches of river. Densities like that don’t really exist in most of India. However, there are a few places where relatively large numbers of mugger crocodiles can be seen.

Among unprotected areas, one place really springs to mind. The Mahad District in Maharashtra with the river Savitri flowing through it. On a visit there a few years ago, I was enjoying a cup of coffee on the edge of the river when I noticed a bunch of children playing on the far side. It seemed like a normal scene along many rivers in India. The difference here was that there were three muggers, all over two metres long, basking on the bank less than 15 metres away! What was most intriguing was the fact that neither seemed too bothered by the other’s presence. A little downstream, a man was wading chest-deep through the river collecting shrimp.

When I asked my colleagues from the region about this, they told me that there were no attacks and local people were fine with the crocs being around. In stark contrast, crocs in Baroda seem to be a very big problem and conflict is high. We don’t quite know why things are so different in various locations, but, researchers from the Madras Crocodile Bank are currently working on understanding human-crocodile conflict and we might have some answers soon. 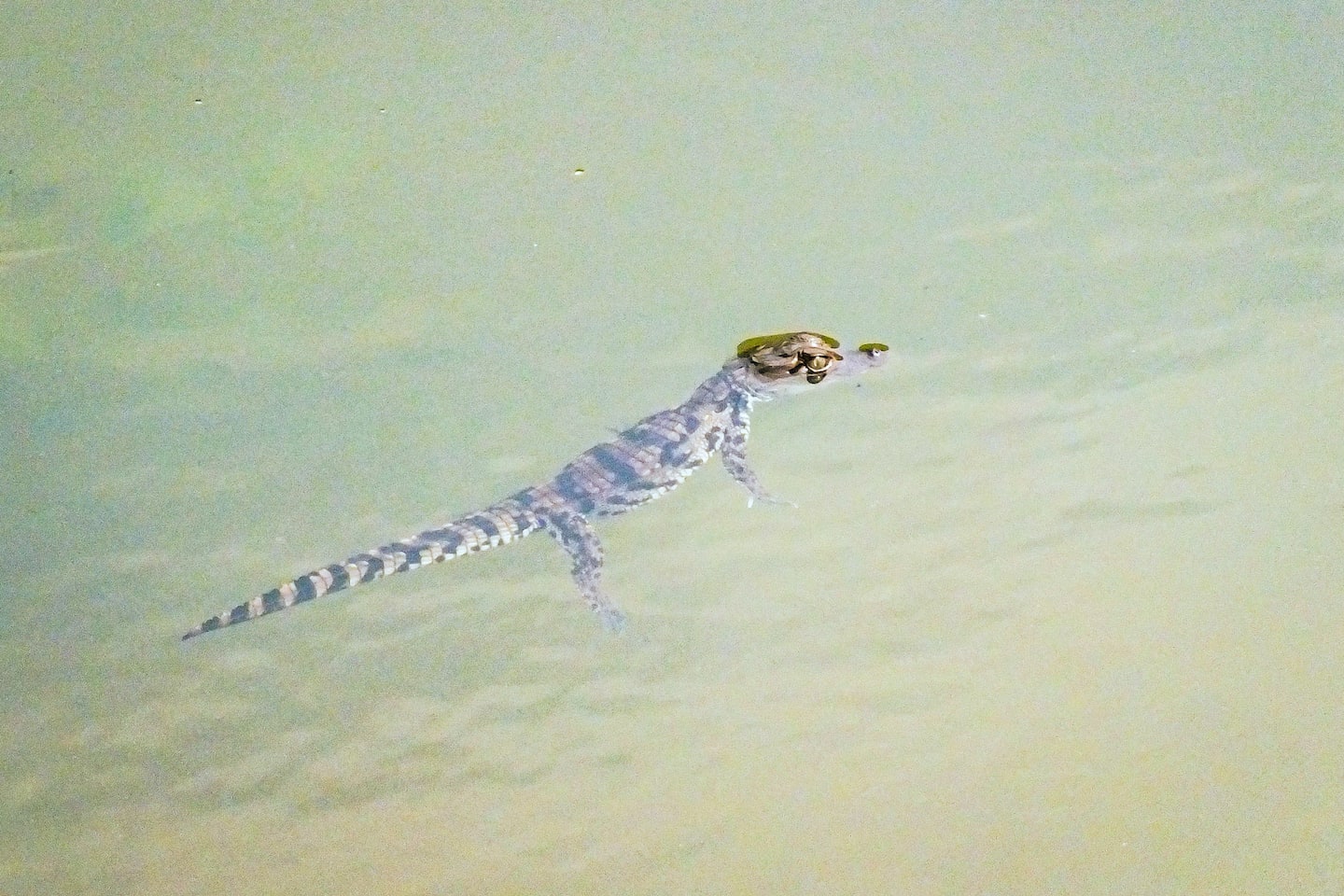 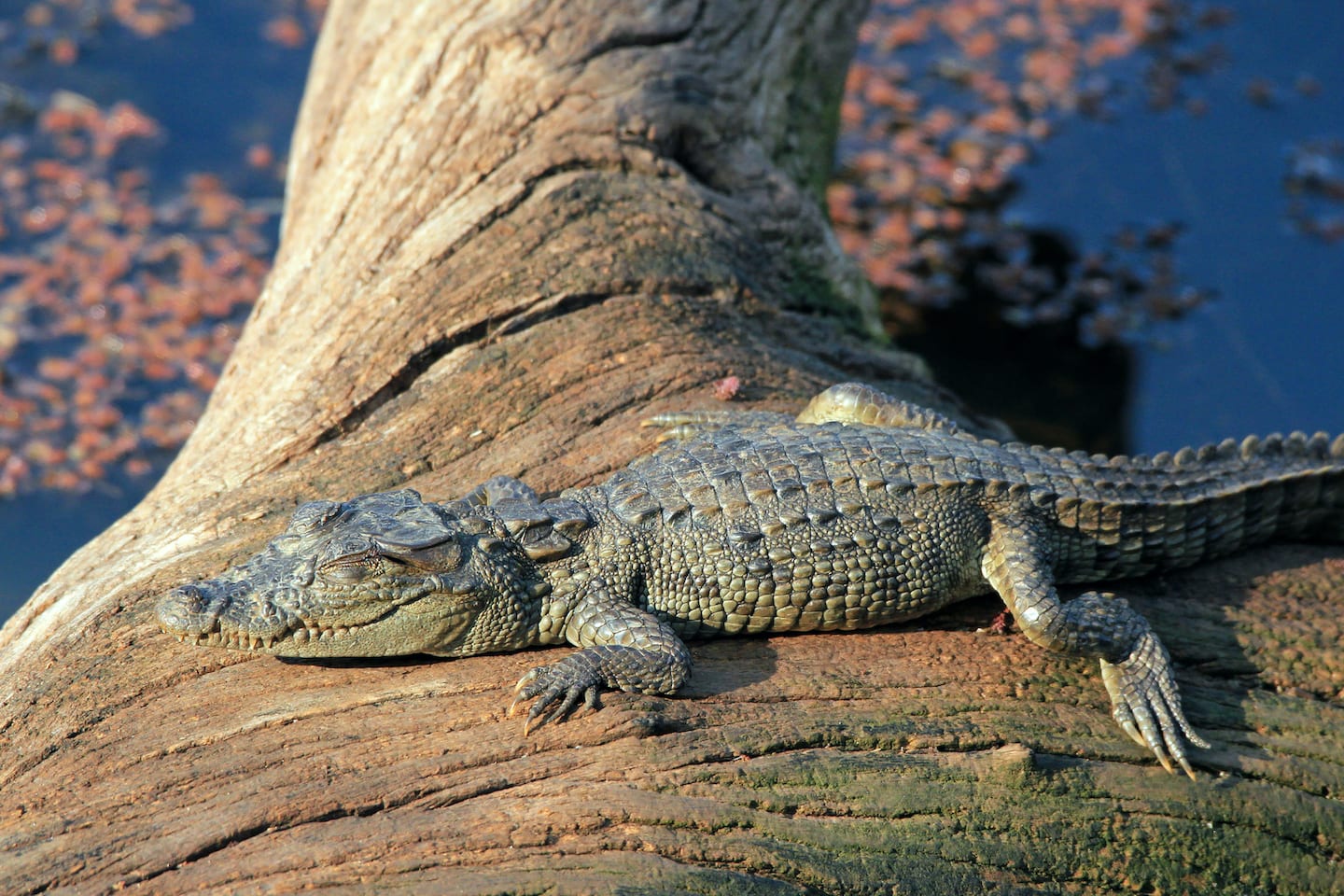 Mugger hatchlings (left), usually under 30 cm in length, and juveniles (right) stay near their nest till they are about a year old. Hatchlings have black bands on their body which disappear as they grow older. Photos: Nisarg Prakash (left), Daniel Lamborn/Shutterstock (right)

Muggers are also known to walk long distances over land in the dry season. In Sri Lanka, hundreds of muggers make a migration inland each year to access water and high densities of fish. In India, muggers are often found in small ponds and lakes during the summer or after torrential rain when they may look for new places to live.

During our fieldwork, we spotted a mugger, approximately two metres long, in a lake where we were conducting some ecological research. Within a few days, locals had spotted it and immediately began to panic. They wanted the Forest Department to remove it and put it “back in the forest”. Fortunately, the lake level was high and nobody was able to catch the croc. We haven’t seen it this year and can only surmise that it has moved to another lake. But we have been able to point out to locals how it stayed away from people and wasn’t a danger to be worried about.

While I worked every day with numerous croc species at the Madras Crocodile Bank, the mugger was never high on the danger quotient. They are docile and most often retreat when approached; except when guarding their nests. Female muggers make “hole nests” by digging a 30-50 cm pit with their hind legs. They lay about 30 eggs inside and cover it up.

Like many other crocodiles, the mother is protective and will wait near her nest throughout the 55-75-day incubation period. When the young are ready to hatch, they call out with high pitched grunts. She then digs out the nest carefully and even helps some young hatch by gently cracking the egg between her jaws. She carries the young down to the water where they will stay near her for almost the entire first year of their lives.

Human encroachment into its natural habitats and the ensuing incidents of conflict are among several threats that the marsh crocodile faces. However, in places such as Maltaj, Gujarat (above), humans coexist peacefully with the broad-snouted crocodile. Photo: Rupeshsarkar/CC BY-SA 4.0

Young muggers will eat anything small that they can overcome from insects and fish to crustaceans and other small animals. They stay in the shallows, hidden as far as possible amid vegetation and rocks. They are also potential prey to a host of animals from birds to large fish.

For young muggers in India today, life is perilous. If lucky enough to be born, they face landscape change, pesticides, dam projects, and numerous anthropogenic dangers. The few that do survive are not tolerated in most places outside “Protected Areas” and exceptions like Mahad’s Savitri River.

Muggers, like crocodiles all over the world, are apex predators in the water systems they occupy. They perform a great service in keeping aquatic ecosystems healthy by controlling populations of various other species. With a little tolerance and cautious practices, muggers could quite easily and safely become part of the greater landscape and resume their role in Nature. However, until we see them for what they truly are, and not just as predators out to eat humans, the mugger will stay restricted to a fraction of its former range. Meanwhile, I continue to keep a hopeful eye out for that vagrant crocodile when I cross the lake every day. Maybe it will return. 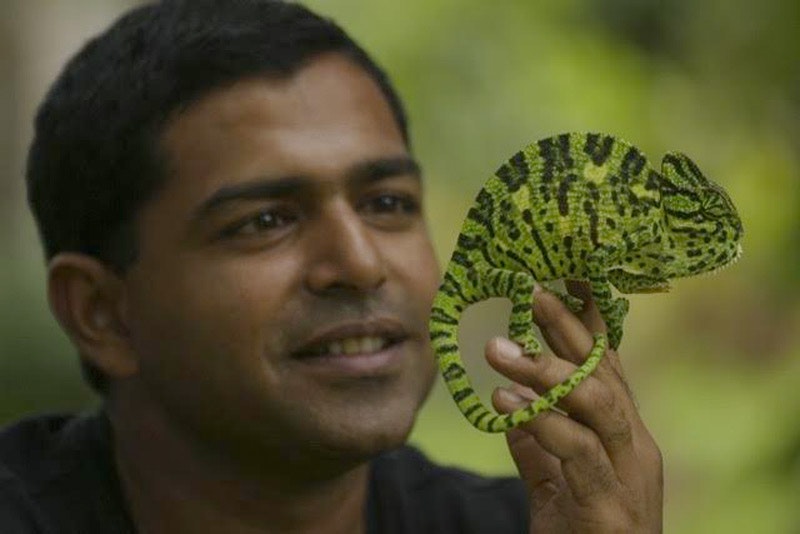