Endemic to the Nicobar group of islands, this ground-dwelling bird that barely survived a devastating tsunami now faces multiple threats to its existence 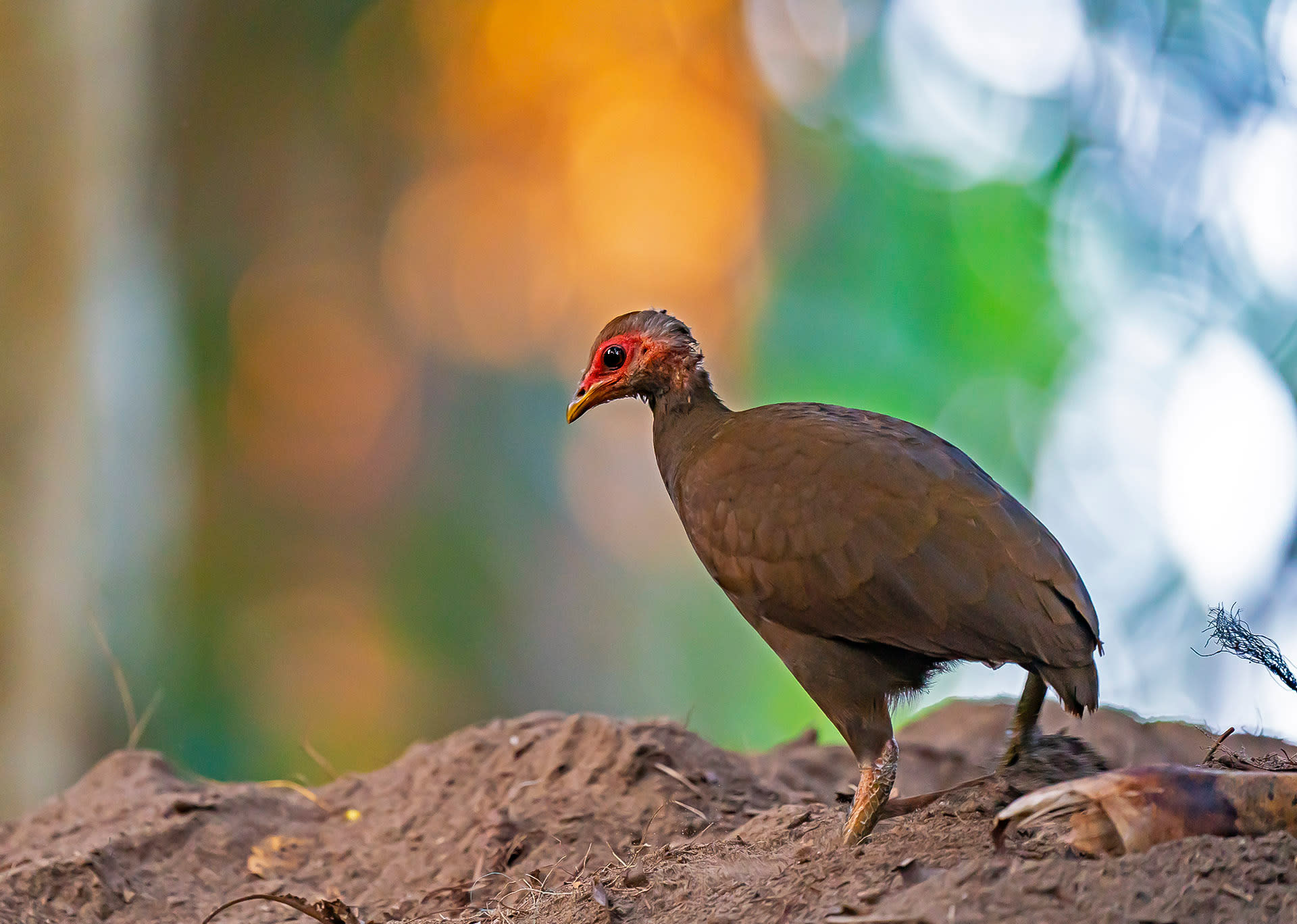 Sometime in the 1980s, young Rene W.R.J. Dekker, now a world-famous expert on megapodes from the National Museum of Natural History, Leiden, the Netherlands, wrote to me saying he wanted to conduct studies on the Nicobar megapode (Megapodius nicobariensis). I replied that he needed to first get permission from the Government of India to go to the Andaman and Nicobar Islands, as they were not freely open to foreign visitors back then. It took Rene some ten years to get permission, but even then, detailed research permission was not granted to him. Later, Ravi Sankaran took up studies on the Nicobar megapode in the 1990s and introduced this fascinating but neglected species to the world.

Ravi’s untimely death in January 2009 left a vacuum, but fortunately, his student K Sivakumar continued the research for several years before he joined the Wildlife Institute of India as faculty. For almost 35 years, I have been following conservation and research activities regarding this intriguing bird. Finally, in 2012, I was lucky enough to see it at Tillanchong Island during an inspection for the Ministry of Environment and Forests, Government of India. While writing my book Threatened Birds of India (from 2010 to 2012), I was in touch with Dr K Sivakumar and Dr Manish Chandi, who had first-hand experience of the Nicobar megapode and its habitat.

Located in the central Nicobar group of islands, Tillanchong is a small island, 17 sq km in area. Its coastal forest is a crucial habitat for the Nicobar megapode. Photo: Asad Rahmani Cover photo: The Nicobar megapode is a ground-dwelling bird endemic to the Nicobar group of islands. It is named after its massive, strong feet — megapode literally means “big feet”. Photo: Dhritiman Mukherjee

There are about 22 species of megapodes in the world, and they belong to the order Galliformes. Birds, like other taxa, are classified broadly into orders, families, genera, and species. Galliformes is a large order of 290 species of chicken-like birds distributed worldwide and consisting of pheasants, partridges, francolins, fowls, peafowls, guinea fowls, grouses, quails, and megapodes. Megapodes belong to the family Megapodiidae. Like pheasants, megapodes also originated in Asia, but due to geological upheavals in the Gondwana plates, they got separated on the Australian plate and evolved into many species, sometimes reaching fall flung islands in the Pacific. How these largely-ground dwelling, terrestrial, weak flyers got to remote islands is still a mystery.

Megapodes do not incubate their eggs using body heat. They bury the eggs in a mound or burrow on coastal/volcanic beaches where heat is generated by rotting vegetation, sun-warmed sand, or geothermally. To keep the temperature constant, they remove vegetation/sand or add to it. That is why they are also called “thermometer birds” due to their ability to detect the temperature of egg mounds/burrows by their specialised feet. Another interesting fact is that on larger islands, like Sulawesi and the Philippines, which have large ground predators (especially cats and civet cats), megapodes use burrows instead of mounds for laying their eggs as they are safer. In predator-free islands, megapode species are mound builders. One such species is the Nicobar megapode.

Caption: (Top) Once a male Nicobar megapode builds a nest, the breeding pair visits it every day to check whether the eggs are safe and insulation is in place. They may dig sand or replace vegetation to keep the temperature at about 33 degrees C and ideal for incubation. (Above) Breeding pairs use the same mound year after year, adding sand, clay, and vegetation and digging multiple burrows in them. As a result, old mounds can be several feet high. Photos: Dhritiman Mukherjee

The Nicobar megapode is endemic to the Nicobar group of islands where it occurs as two races/subspecies on 13 islands: M. n. nicobariensis is endemic to the Nancowry subgroup (Bompoka, Camorta, Katchall, Nancowry, Teressa, Tillanchong and Trinkat), and M. n. abbotti is found in the Great Nicobar subgroup (Great Nicobar, Kondul, Little Nicobar, Megapod, Menchal, Meroe, Trax, and Treis). Historically, it was reported from some the Andaman Islands, but it is now extinct there.

About 100 years ago, the Nicobar megapode was considered a common bird, but studies by Ravi Sankaran in the 1990s show that the population has drastically declined. He found that in 1993-94 the population of M. n. abbotti was estimated at between 3,400 and 6,000, and the number of active mounds was about 850. The population of adult breeding M. n. nicobariensis was estimated to be between 1,200 and 2,100 birds, and the number of active mounds to be a little over 300.

Many island-dwelling large species are susceptible to man-made and natural threats due to their restricted range and small populations. Nicobar megapode is a classic example. Besides hunting and habitat destruction, it has also faced natural disasters such as the earthquake and resultant tsunami of 2004. In that one quick event, nearly 70 per cent of the breeding population disappeared as the tsunami heavily destroyed the littoral forests.

Because these birds make mounds about 200-300 m from the coast/beach, they became locally extinct from Trak and Megapode islands. Dr K Sivakumar’s post-tsunami studies published in 2007 estimated the total number of breeding pairs between 395-790, with the majority on Great Nicobar (405) and Little Nicobar (165). 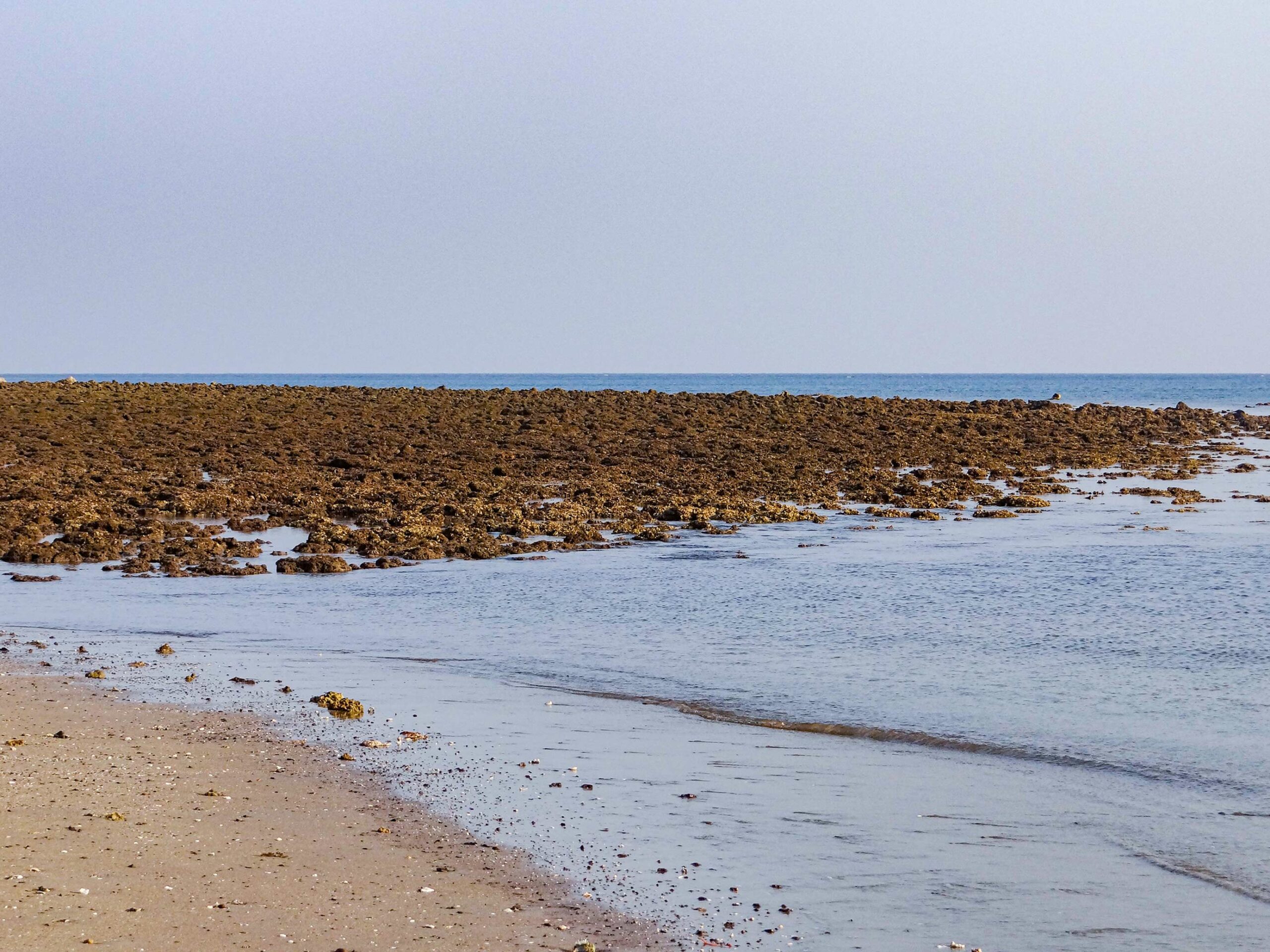 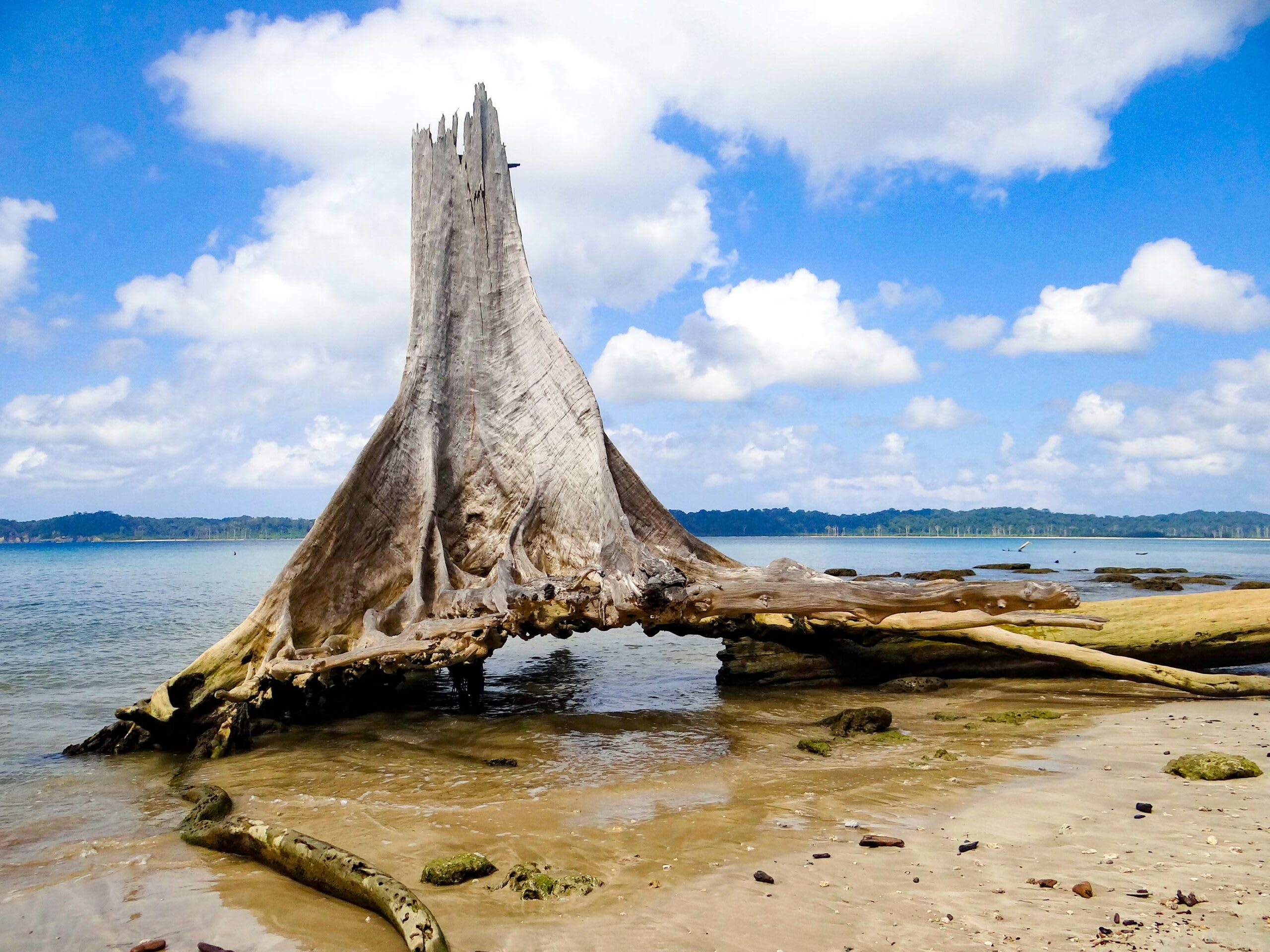 (Left) The 2004 tsunami damaged large tracts of coastal forests along the Andaman and Nicobar group of islands. In some parts, the islands tilted, exposing coral reefs, as seen along the coast in Mayabundar. (Right) Several kilometres of land were submerged, and old trees that could not survive the sudden rise in salinity in the soil perished, leaving behind dead stumps along the coast. Photos: Asad Rahmani

Traditional hunting and sustainable harvesting of eggs was not a threat to the Nicobar megapode as the original inhabitants of these islands were doing this for thousands of years. However, the popularisation of airguns dramatically changed the hunting scenario, and indigenous people, the Nicobarese and Shompens, are allowed hunting in the islands as a traditional practice. But airguns are not traditional weapons, so how can we allow this? From time to time, conservationists have raised the issue of the sale of airguns and ammunition in the Andaman and Nicobar Islands, but no action has been taken until now. On one hand, hunting by mainlanders has decreased due to strict enforcement of the law. Extinction due to hunting should not be underestimated, as it has happened for some species of megapodes in Fiji, New Caledonia, Samoa, Tonga, Niue, and other oceanic islands.

However, the greatest long-term irreversible threat to the megapode is the loss of habitat. Due to the increase in human populations and population shift (sometimes encouraged by the government), habitat loss is widespread and most acute in the Nancowry group of islands. Large chunks of primary and secondary forests have been converted to coconut and rubber plantations. Expanding townships and villages, roads, airstrips, and infrastructure of defence establishments have resulted in the loss of habitat. A 2021 plan by the NITI Aayog seeks to “develop Little Andaman Island as Singapore”. It has been opposed by local people (including some settlers) and conservationists.

Littoral forests, or forests that grow close to the coast, are populated by vegetation that is salt-tolerant and thrives in swampy conditions. These beach forests are a primary habitat of the Nicobar megapode. Photo: Asad Rahmani

About 50 per cent of Great Nicobar is protected national parks, and about 85 per cent comprises the Great Nicobar Biosphere Reserve. The core area consists of two national parks, namely, Campbell Bay and Galathea, and one sanctuary, the Galathea Bay Sanctuary. The NITI Aayog has planned a massive international shipment project and other infrastructures in Great Nicobar at a projected cost of Rs. 75,000 crores. The main sites are at Galathea Bay, part of the national park (which have been denotified), and coastal regions along the islands eastern and southern coasts — key habitats for the Nicobar megapode, leatherback sea turtle (Dermochelys coriacea), and other wildlife.

Climate change and rising sea levels are other long-term threats to the megapode. With global warming, sea-level rise may inundate many nesting sites of the megapode. The Indian Ocean is predicted to rise 3-4 mm every year; in another 40-60 years, many coastal nest mounds of the megapode will be inundated. Not only that, with changes in subsoil water and vegetation structure, many current nesting sites will become unsuitable.

There is an urgent need to start detailed scientific studies on the Nicobar megapode (and other island species) and take conservation measures before it joins the rank of the dodo, another island-dwelling ground bird that was hunted to extinction during the 17th century. Can we afford a similar fate to our Nicobar megapode?