Pygmy hog: Back from the Brink

Conservation efforts have elevated numbers of the elusive and rare pygmy hog, a tiny, shy wild pig from Northeast India

Once found in the tall, dense, riverine grassland plains of the Himalaya in India, Bhutan, and Nepal, the pygmy hog is believed to have been almost completely wiped out in the 1960s. The pygmy hog (Porcula salvania) is the most elusive and rare wild pig species in the world. In 1971, a few hogs found in a tea plantation, seeking refuge from a fire in the Barnadi Sanctuary, were relocated to captivity. The Durrell Wildlife Conservation Trust based in Jersey, Channel Islands, was contacted and in 1977, William Oliver, a staff member, began field studies. By the 1980s, it was concluded that only small populations of the pygmy hog existed — in the Manas and Barnadi Wildlife sanctuaries. However, the continued modification and destruction of grasslands for agriculture, settlements, overgrazing by cattle, thatch-grass harvesting, uncontrolled seasonal burning, and flood-control and forestry projects, further threatened the species. Adding to the litany of problems was the spread of violence in the Northeast and increased poaching for the cooking pot and the market. The late Sanjay Deb Roy, who spent a large chunk of his life in the forests of the Northeast, wrote that in the Barnadi Reserve Forest, village hunters accounted for the loss of a significant population of the creature.

The rarest wild pig species of the world, the pygmy hog, was wiped out of the wilderness in the 1960s. It can now be found in the grasslands of Assam thanks to the Pygmy Hog Conservation Programme Photo: Udayan Borthakur

The presence of the pygmy hog indicates the health of its primary habitat — the tall, wet grasslands of the region. Photo: Parag Jyoti Deka

In 1995, a group of organisations, including the Durrell Wildlife Conservation Trust, the IUCN/SSC Wild Pig Specialist Group, the Assam Forest Department, the Indian government initiated the Pygmy Hog Conservation Programme (PHCP) and were joined by local partners such as EcoSystems India (2002) and Aaaranyak (2018). Plans were made to establish a captive-breeding programme, as a source for reintroduction of pygmy hogs into the wild, and as a beginning to long-term field studies on the pygmy hog’s behavioural-ecology and habitat management requirements. Dr. Goutam Narayan, a wildlife scientist who had earlier worked for the Bombay Natural History Society, knew just how vital this project and its recommendations were, as it presented the last hope for the pygmy hog. He chose to dedicate his life to the resurrection of the species, and has probably done more for it than any other person alive.

Credited with bring back the pygmy hog’s population from the brink, the Pygmy Hog Conservation Programme has successfully managed to breed these animals in captivity and release them in the wild. Seen here is a batch of hogs being transported for release into the wild. Photo: Goutam Narayan

The PHCP’s captive-breeding programme began by first capturing six pygmy hogs from the wild and breeding them in custom-built enclosures in Basistha in Assam, in environs as close to their natural habitat as possible. Five more hogs were also caught during the capture operation but were released in the wild after four of them were fitted with transmitters for radio-telemetry studies.

Phylogenetic analyses of the pygmy hog revealed that it belongs to a separate genus, Porcula. It is evolutionarily unique and completely different from boars, warthogs, and pigs.

In 2003, PHCP released its report confirming that the captive breeding programme had been hugely successful. Apart from the first phase of radio-tracking in Manas National Park, a field station was established to study grassland ecology and management. Another breeding centre was opened in Potasali near Nameri National Park. A small, restricted, pre-release area was prepared near Nameri to acclimatise the animals to life without human interference. The grassland in the pre-release area was restored and electric fences constructed to keep larger animals out. Eighteen pygmy hogs were transferred to this area and monitored closely. Three reintroduction sites were selected — the Barnadi Wildlife Sanctuary, Orang National Park and Sonai-Rupai Wildlife Sanctuary.

Captive-raised pygmy hogs were released in the Sonai-Rupai and Barnadi Wildlife Sanctuaries and the Orang National Park in Assam, where their population has increased to around 200. Photo: Udayan Borthakur

Field biologists and scientists working on the project understand the future of the species is not only dependent on whether the captive-raised hogs are able to survive, adapt, and breed in the wild, but also on how their habitat is restored and managed. So far, the pygmy hogs raised in Basistha and Nameri have been released in Sonai-Rupai (where challenges such as habitat management in the form of indiscriminate grass burning and overgrazing had to be overcome), Orang National Park, and Barnadi Wildlife Sanctuary. The hogs are doing well in Orang, where the population has increased to around 200. 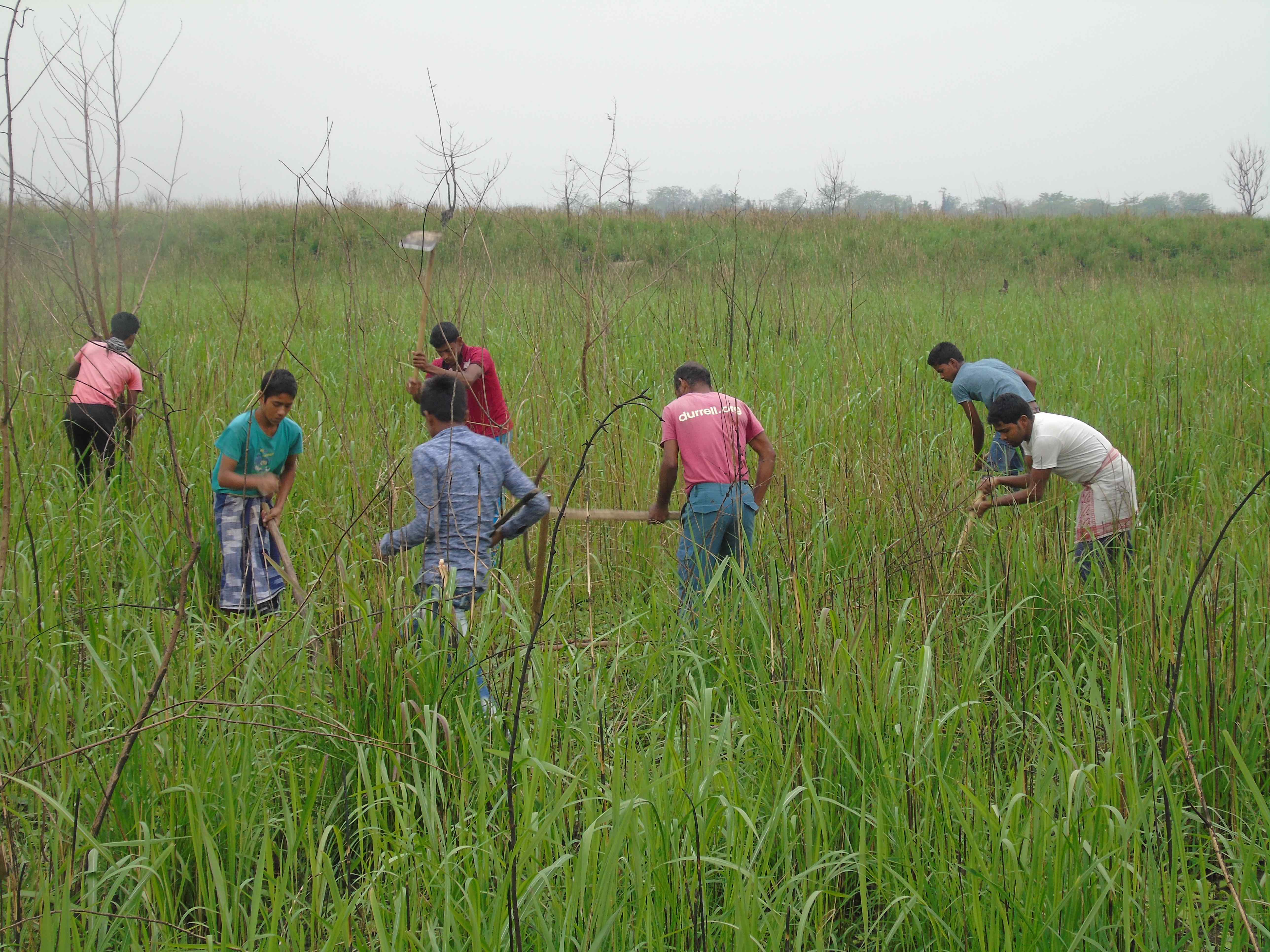 Proper management of the pygmy hog’s grassland habitat is key to its survival. Photo: Jonmani Kalita

Narayan believes that the key to ensure the future of the pygmy hog is to stop the indiscriminate dry season burning of their native grasslands and prevent the transformation of these grasslands into a different habitat. He argues the only burning permitted should be limited to controlled fires to clear dried grass debris. He also suggests that efforts be made to stop uncontrolled cattle grazing and reconsider plans for the scores of mega dams on Himalayan rivers that could cause irreparable harm to the grassland plains and downstream areas.

Modern technology is undoubtedly offering us a chance to protect beleaguered creatures such as the pygmy hog. How we convert this chance into an opportunity to stem the tide of extinction for the pygmy hog and other endangered species depends on our ability to protect their natural, wild habitats in the difficult days ahead.

The Pygmy Hog
Porcula salvania
With darkish-brown skin, a vestigial tail measuring just 2.5 cm., a sharp tapering head, and a slightly hairy crest on the forehead, it does not possess the looks to match its fame. The upper canines are visible on the sides of the mouth only in the adult male. It is believed to be non-territorial and lives in small family groups of four to five, comprising one or two adult females and juveniles, and occasionally an adult male, usually during the rut. The species builds nests (trough dug out and lined with grass) that are used by both sexes throughout the year. Reproduction is seasonal, with a birth peak just before the monsoon (late April to May in western Assam). The gestation period is about five months, after which two to six young are born. The pygmy hog is the sole host of the pygmy hog-sucking louse Haematopinus oliveri, incidentally also classified as endangered because of the precarious status of its host. 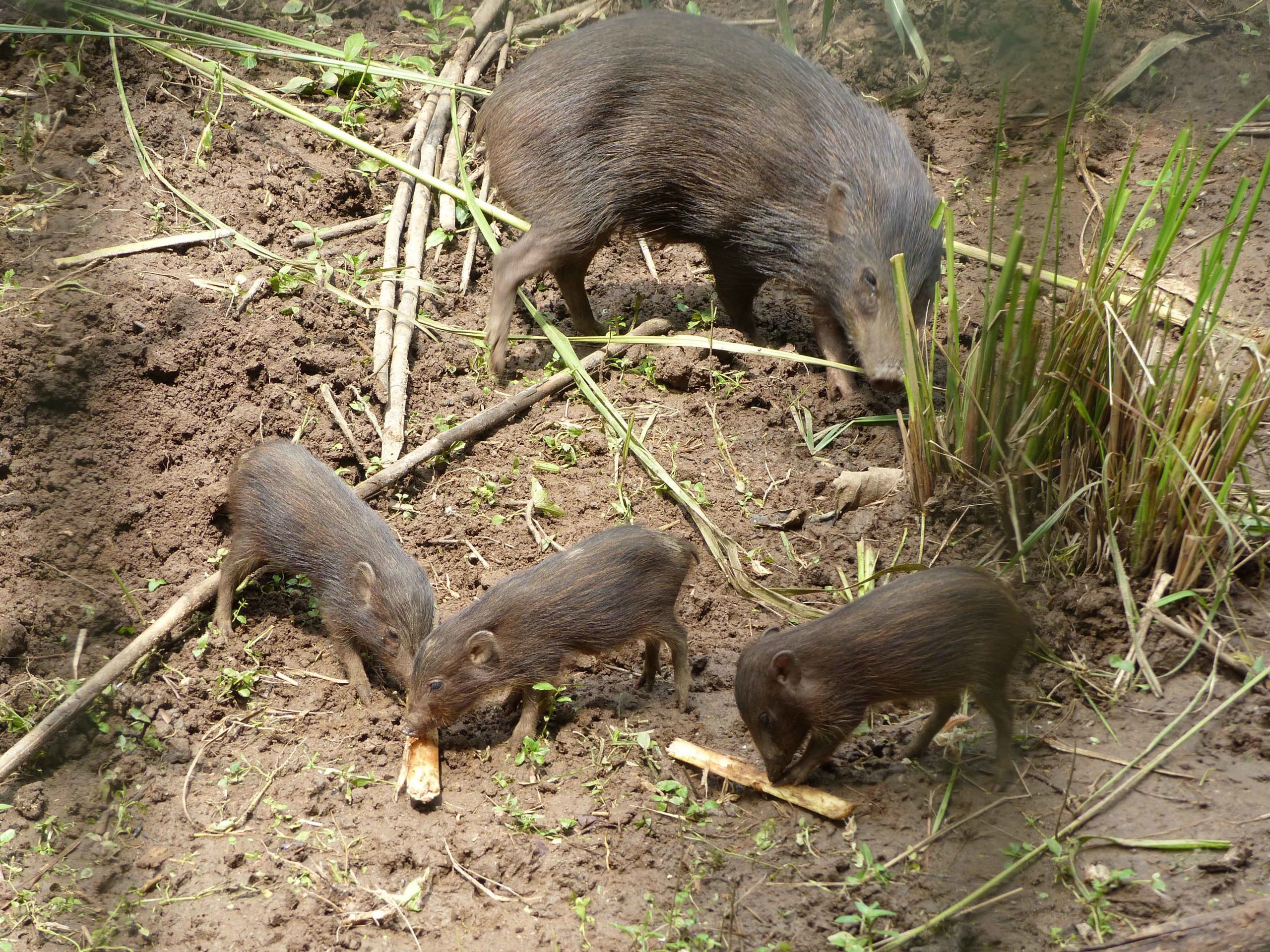 Pygmy hogs have a gestation period of around five months, after which they give birth to three to five young. Photo: Tammo Buss 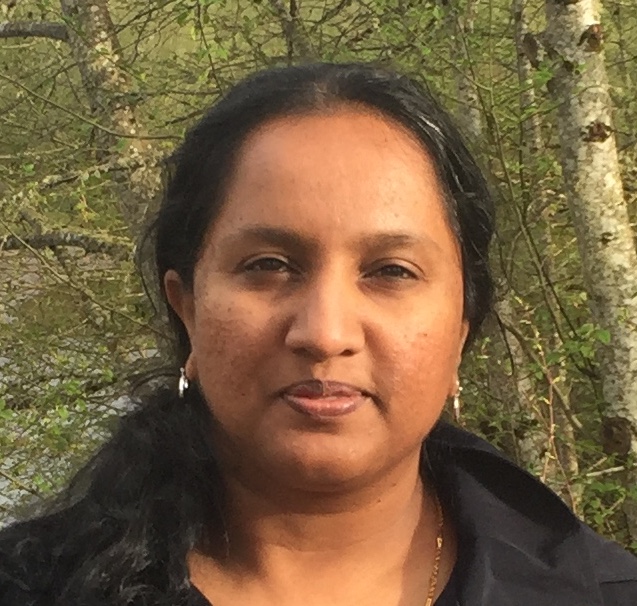 ⁠When she is not busy meeting deadlines, Executive Editor, Sanctuary Asia, Lakshmy Raman, enjoys reading, and long walks along wooded trails. She is passionate about nature writing and conservation.