Lessons in Citizen Science and Community Stewardship in Latpanchar 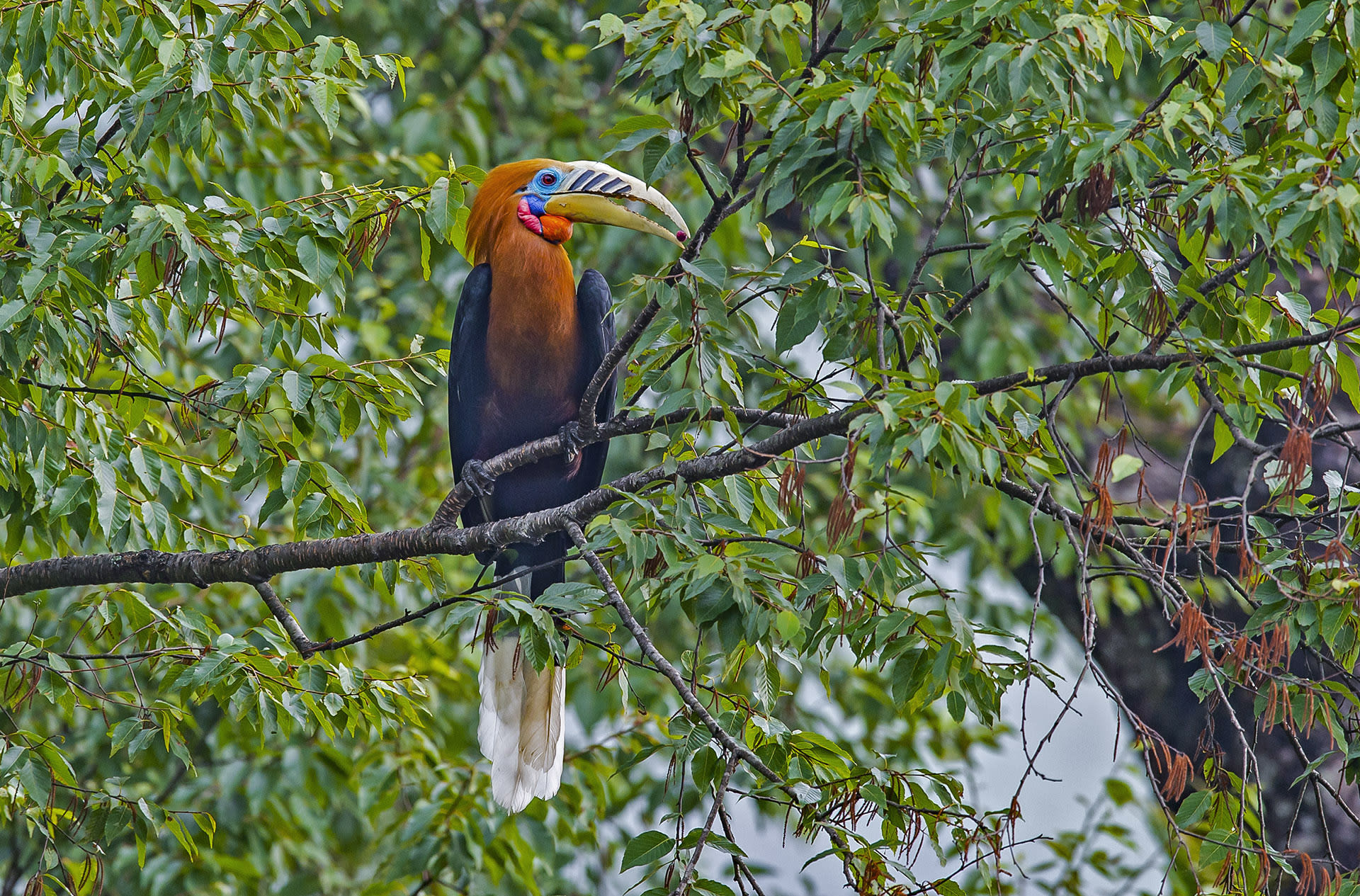 Latpanchar is a little hamlet located at an altitude of 1,200 m on the fringes of the Mahananda Wildlife Sanctuary in the Darjeeling district of West Bengal. The village is part of a cinchona plantation area, and until recently, most families depended on employment in the plantation for their livelihood. However, since 2014, the community has grown interested in and conscious of the region’s wildlife, especially the rufous-necked hornbill, which has led to an increase in bird and nature tourism.

It all started in 2012, when local resident, Parag Gurung, became interested in the birds around the village. He was often seen walking around with a pair of binoculars and diary, observing bird behaviour and taking notes. Fellow community members observed him with curiosity, some considered his actions mad.

In 2013, an active nest of the rufous-necked hornbill was discovered near the village. Parag began observing and documenting the unique breeding behaviour of this species, under the guidance of Mr. Debapratim Saha, an educator based out of Siliguri.

The rufous-necked hornbill (Aceros nipalensis), locally known as hongrayo or dhanesh, is a medium-sized hornbill that is quite rare. It is found in the Himalayan foothills of Bhutan, north Bengal, Sikkim, Arunachal Pradesh, few areas of Nagaland and Mizoram, and other countries in Southeast Asia. North Bengal forms the westernmost limit of its global geographical range. It prefers elevations of 500-2,800 m.

The rufous-necked hornbill was nesting in the saur (Betula sp.). Parag observed the nest and made notes of the activities of the nesting pair. One March morning, the rufous-necked hornbill pair was seen inspecting a cavity. Later in the afternoon, both the male and female were spotted outside it. The next day, the pair was mating on the nest tree. For the next few days, they were occasionally seen mating, and the male was seen feeding the female who would enter and exit the nest cavity. Ten days later, the female entered the cavity, sealed herself from the inside, leaving only a small slit open. Over the next few months, the nest was watched occasionally and the male was seen bringing many food items to the inmates. The female remained inside the nest for about 81 days, and then broke open the seal to exit with a grown chick. Throughout this period, the male performed the arduous task of bringing them both food.

Soon, the story about this fascinating breeding behaviour spread around the village and many community members developed an interest in wildlife documentation. However, until recently, they weren’t aware that some of the key observations made over the years could contribute to science, and to the conservation of this little-known species.

Apart from the intensive study of its breeding behaviour, community members also observed the rufous-necked hornbill starting to visit and clean its nest from January onwards. However, cleaning of a nest does not always indicate successful nesting.

Over the years other observations were also recorded. During courtship, the male offers the female food, and also makes a “kurrr-kurrr” sound that is different from its usual call. It was noted that the female enters the nest between end-March and the third week of April. This coincides with the pattern in Namdapha Tiger Reserve, Eaglenest Wildlife Sanctuary, Arunachal Pradesh, and Buxa Tiger Reserve, West Bengal. This period coincides with the fruiting period of tarsing fruit which the birds feed on. Around mid-April, when the tarsing fruiting decreases, the female of rufous-necked hornbills are seen less, indicating that they have started entering their nest cavities. Other observers noticed that if a single female visited a fruiting tarsing tree, she was chased away by other paired females.

Diet while breeding
The diet of the hornbills was also studied at an active nest by documenting the food brought by the male. Hornbills store food in their throat pouches. The food item, either a fruit or animal, can be seen when the male regurgitates it before feeding it to the female. The hornbill’s diet in the breeding season can also be known by examining the ground below an active nest, and documenting seeds that have been regurgitated by the female and chick from inside the cavity. 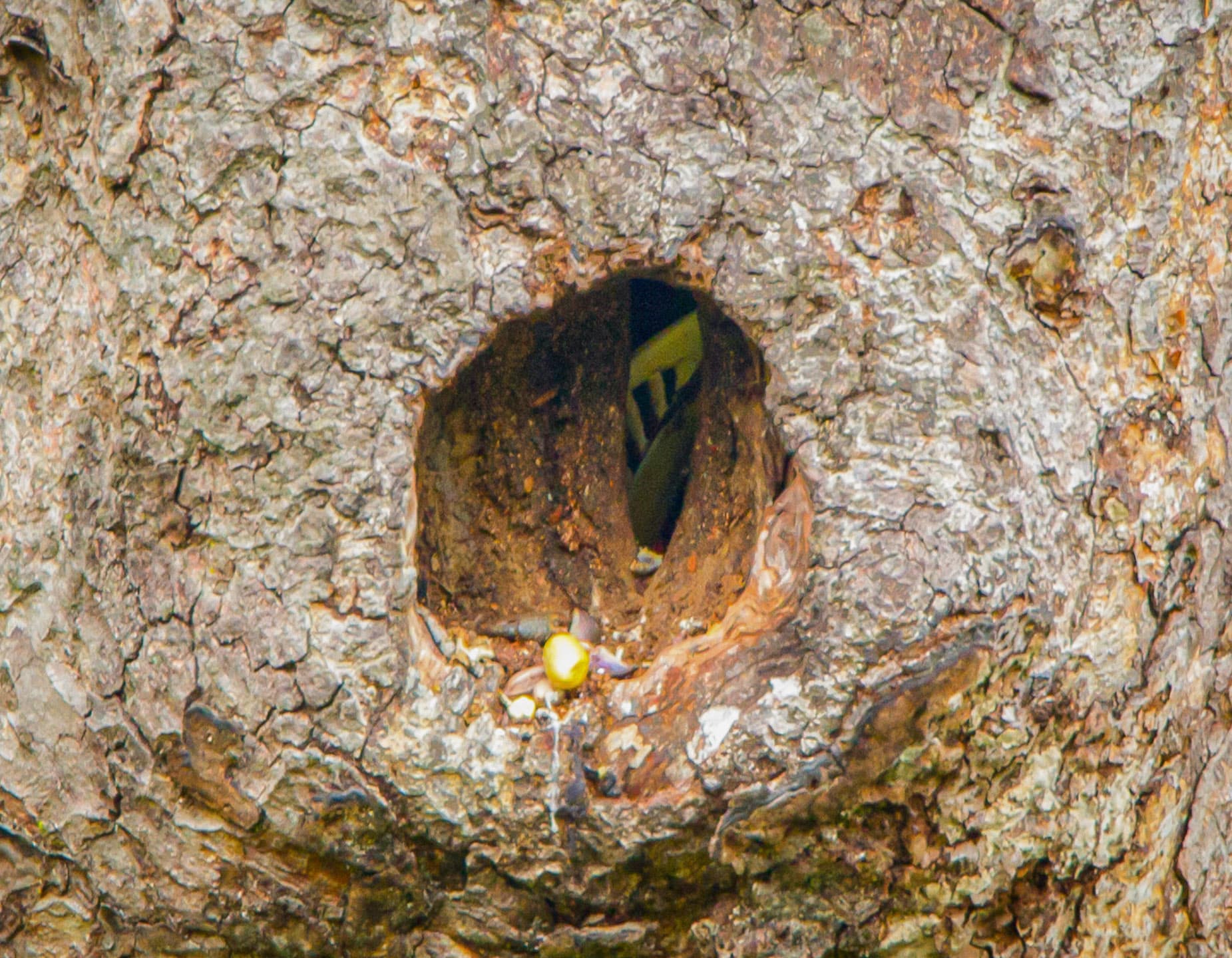 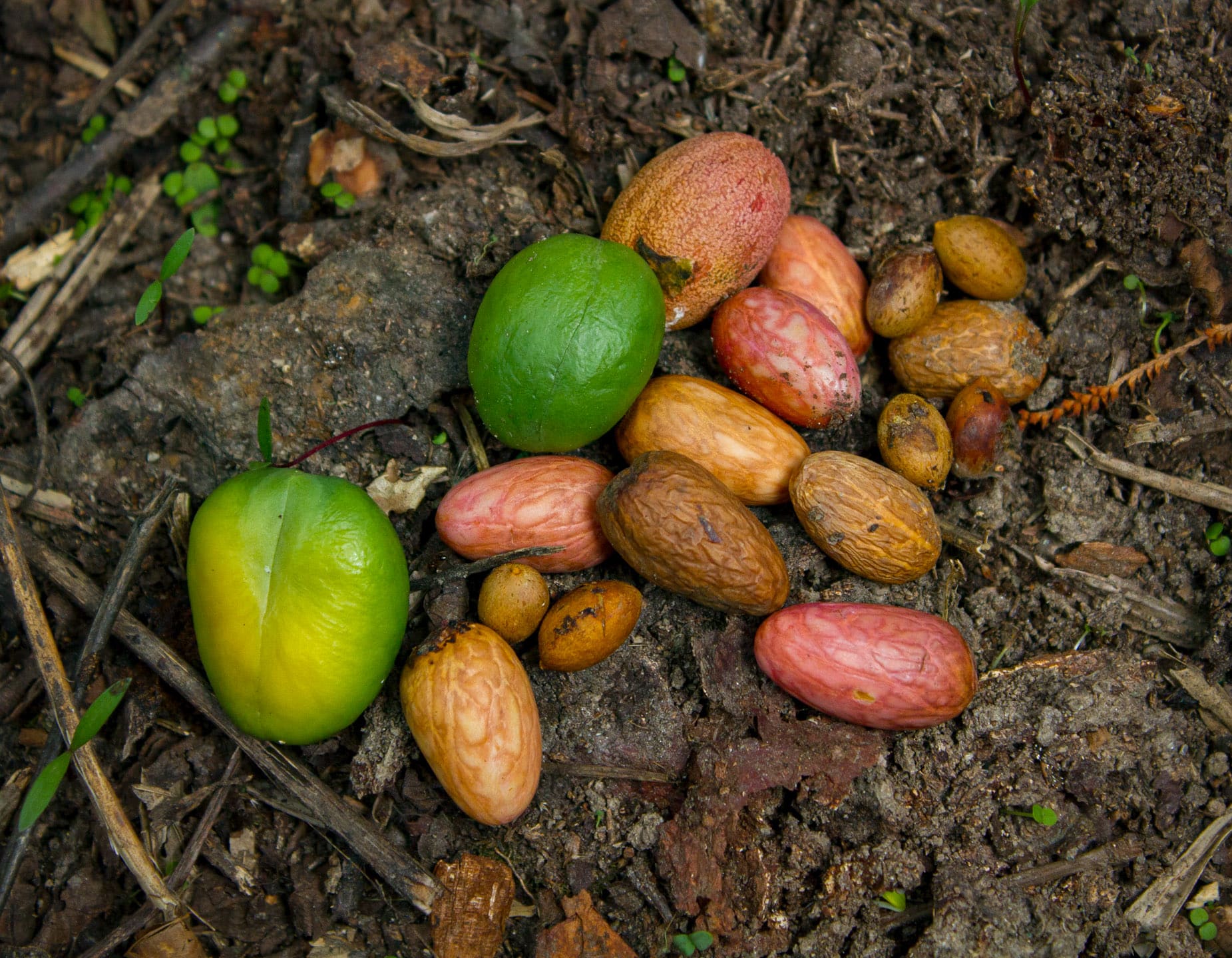 (Left) These monogamous birds may use the same nesting sites (natural holes found in tall, old, broad-girthed trees) over consecutive breeding seasons. (Right) Regurgitated seeds can often be seen scattered around a tree in which these primarily frugivorous birds nest. Photos: Debapratim Saha

Asian hornbills eat a variety of fruits and are important seed dispersers. Owing to their wide gape size, hornbills are known to feed on many large-seeded fruits, the seeds of which are regurgitated, unharmed. Some of the seeds collected from under an active nest in Latpanchar included: Dysoxylum gotadhara, Dysoxylum procerum, Beilschmiedia sp., Canarium strictum., Horsfieldia kingii, Aglaia spectabilis and other species belonging to the Lauraceae family.

The regurgitated seeds found under the nest in Latpanchar were similar to hornbill food recorded from other studies in Arunachal Pradesh. Additionally, remnants of a crab were also observed. Lizards, frogs, and even bird chicks were fed to the rufous-necked hornbill females and chicks.

A rufous-necked hornbill clutch usually has one or two chicks. A chick looks out before exiting the nest cavity Photo: Parag Gurung

Active nests around Latpanchar
In 2012- 2013, two active nests of the rufous-necked hornbill were known in Latpanchar. Since then, four more active nests have been spotted near the village. Two nest trees were lost in storms in 2016 and 2019, respectively. In another saur tree, a hornbill pair was seen cleaning the cavity but they did not use it, probably because a sap-like material was seeping out of the cavity.

Predators and competitors
Since hornbills are secondary cavity nesters, their requirement for already existing cavities in large trees, determines whether they are able to breed. Since two nest trees were lost in natural storms, it could have increased the intra-specific competition for limited nest cavities. Raptors were observed displaying aggression towards the rufous-necked hornbill, which may have been predation attempts.

Community protection for the rufous-necked hornbill in Latpanchar provides a safe haven for this magnificent species which is threatened by hunting and habitat loss throughout its range. Photo: Parag Gurung

Avifaunal diversity
Latpanchar also harbours other equally unique and important avifauna species, whose lives and behaviour community members have tried to document. The green cochoa (Cochoa viridis) was first observed in Latpanchar around 2015, and then not until 2018. It is now seen often and is a favourite among bird enthusiasts.

Red-headed trogon (Harpactes erythrocephalus) is another species that is a favourite of the Latpanchar villagers. This species is sometimes sighted even near the village.

(Left) Bird enthusiasts have recorded the rufous sibia with its gorgeous blue wingtips in Latpanchar. (Right) Red-headed trogons have often been spotted and photographed within the village as well. Photo: suvro06/Shutterstock (left), Parag Gurung (right)

Close connection
The village community shares a deep connection with the surrounding forests and the biodiversity it harbours. They have been documenting the natural history of the region for several years now. Some tourist guides from Latpanchar have called for the need to design and implement strict tourism guidelines to ensure minimal disturbance to wildlife and promote ethical tourism practices.

The rufous-necked hornbill is revered in this landscape. Along with other birds, it has brought tremendous tourism prospects for this little hamlet, and has directly and indirectly increased livelihood opportunities for many families. The dearth of employment opportunities in the region has often meant that youth leave for bigger cities in search of better opportunities. But the potential for sustaining a decent life from the forests without disturbing them, now allows people to stay back. Over time, an increasing number of tourists and wildlife enthusiasts have visited Latpanchar. The forests, biodiversity, and landscape have given the people a sense of security and peace, along with livelihood support that has kept them from migrating.

Among all the wildlife of the area, the rufous-necked hornbill stands out. Beyond its conservation value, this species has given Latpanchar’s residents an identity, and they have a lot of affection for it. The village youth are equally interested in conserving and preserving the rufous-necked hornbill which is listed as “Vulnerable” on the IUCN Red List. Some have even nurtured seeds of this bird’s food plants into saplings, to be planted around the village. They want to document the bird’s breeding biology in detail and protect the nest trees.

This ownership towards the species and the landscape displayed by the community reflects the multi-dimensional relationship shared between local communities and their natural surroundings. This relationship, with some external guidance, will continue to provide a safe haven for the rufous-necked hornbill, a globally threatened species.

This article is dedicated to Anmol Rai, one of the authors, who passed away suddenly aged 29.

This piece was written with guidance from Debapratim Saha, and Karishma Pradhan (Nature Conservation Foundation).