Bare Truth: Why We Need to Save Our Sloth Bears

This nocturnal bear, with powerful claws, is one of the most feared animals of the Indian jungle and yet its survival is threatened 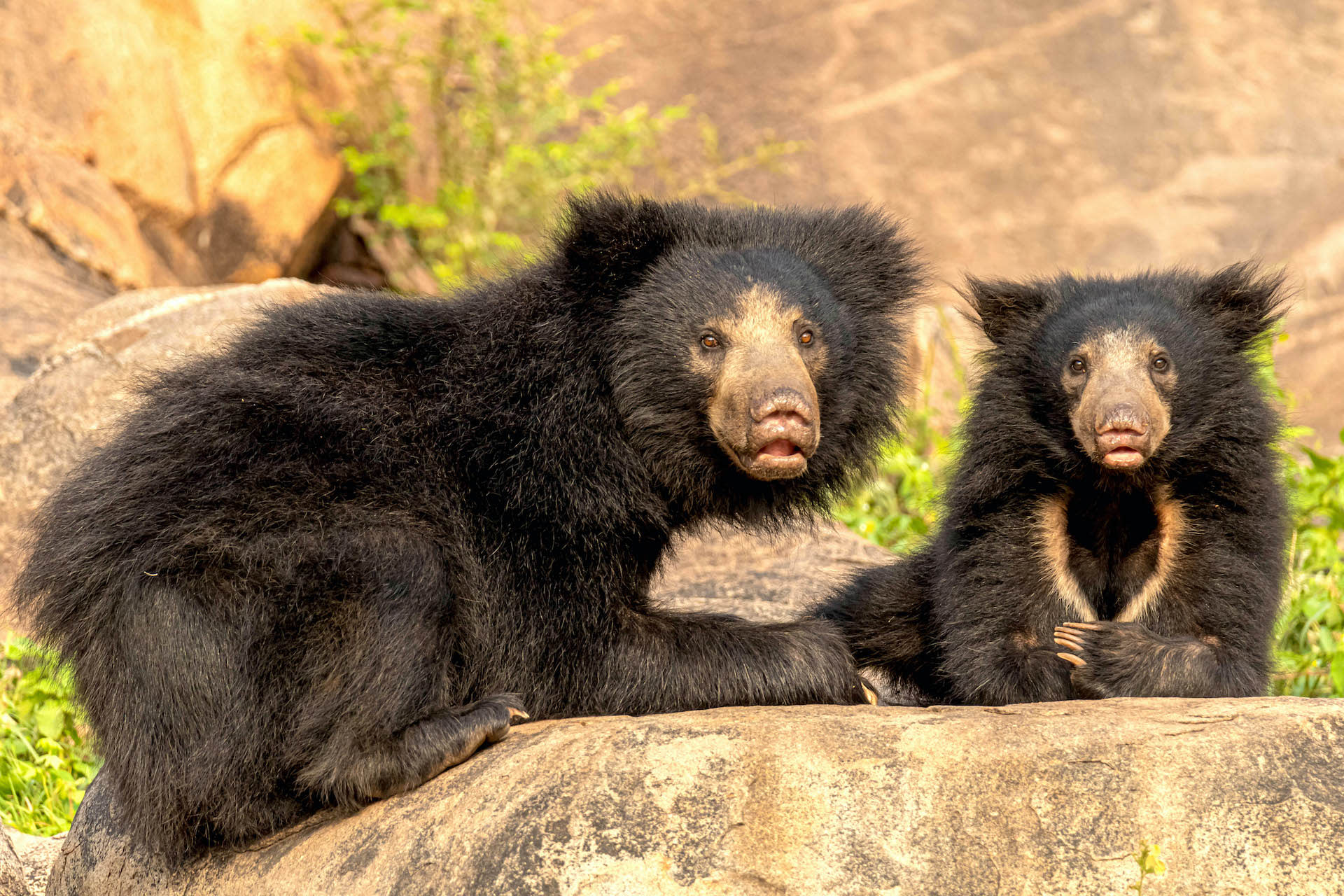 “It’s evening time, don’t go towards that hill, the bear will maul you” (Bhaiya shaam ho gayi, us pahadi par mat jaiyega, bhaluwa pakad leg), two passers-by returning with heavy loads of fuelwood on their shoulders warned me. I was surprised and curious, and wanted to ask more questions, but they were in a hurry. It was the first time I’d heard of the presence of bears in the forests of Mirzapur. It was 2010 and I was pursuing my masters from Banaras Hindu University’s south campus located in the forested landscapes of Mirzapur. Surprisingly, when I discussed the incident with faculty members, no one had a clue and instead students were asked not to venture out into forests without a teacher’s permission. However, that didn’t affect me much and I was ever more curious to know more about the bears. My research led me to learn about the sloth bear and by the time I graduated in 2012, my love for sloth bears became almost an obsession. I was seriously concerned about their future as their habitats in Mirzapur were facing many problems due to deforestation, real estate development, and mining activities which were increasing day by day. However, my biggest worry was the lack of awareness about the species among people and the apathy of the government towards conservation of this ignored species.

(Top) India has four wildlife sanctuaries dedicated to the sloth bears – Daroji (pictured here) and Gudekote in Karnataka and Jessore and Ratanmahal in Gujarat. Though they are distributed from the foothills of the Himalayas to the southern tip of the Indian peninsula, the Western Ghats and the forests of central India are where there are most likely to be seen. (Above) Sloth bears carry their young on their back. The cubs stay with their mother till they are about two years old. Photos: Akshay Manwani
Cover photo: Sloth bears are the most common of the four species of bears found in India. These bears can be distinguished by their long muzzle, protruding lips, and the distinctive white “V” chevron on their chests.
Cover photo: Akshay Manwani

Sloth bears are truly Indian bears, as compared to other three species of bear found in India — Himalayan black bear, Himalayan brown bear, and sun bear — all of which have a restricted habitat range in Indian territory. On the other hand, India is home to 90 per cent of the sloth bear’s global population and their habitats range from the foothills of north and Northeast India to the Western Ghats. Their habitats include both dry and wet tropical forests, grasslands, hilly plateau, scrublands, and savannah to name a few. Sloth bears are also found in Nepal and Sri Lanka, and possibly in Bhutan, but have become extinct in Bangladesh.

There are several characteristics which make sloth bears unique and special among all eight bear species found in the world today. They are the only species of bear to possess a specific adaptation for eating ground living social insects such as ants and termites (this feeding behaviour is called myrmecophagy). The lack of upper front teeth helps them produce powerful suction using their inner lips to suck the insects. While doing so, they close their nostrils completely in order to prevent soil particles and insects from entering. This produces a loud sucking noise and can be heard from a distance. Apart from ants and termites, sloth bears have a great taste for sugar-rich fruits, and they are also known to climb trees to feast on honeybee hives.

Their affinity for honey is reflected in their scientific name Melursus ursinus, where mel means honey and ursus means bear in Latin. However, the term “sloth” is a legacy of a taxonomic misnomer from the late 17th century when it was wrongly classified as a species of sloth (a mammal found in Central and South America) by a European zoologist George Shaw. Interestingly, sloth bears find mention in the Ramayana where the character Jambavan or Kapishreshtha is also described as Riksharaj (riksha means bears, raj is king) making him the king of bears. 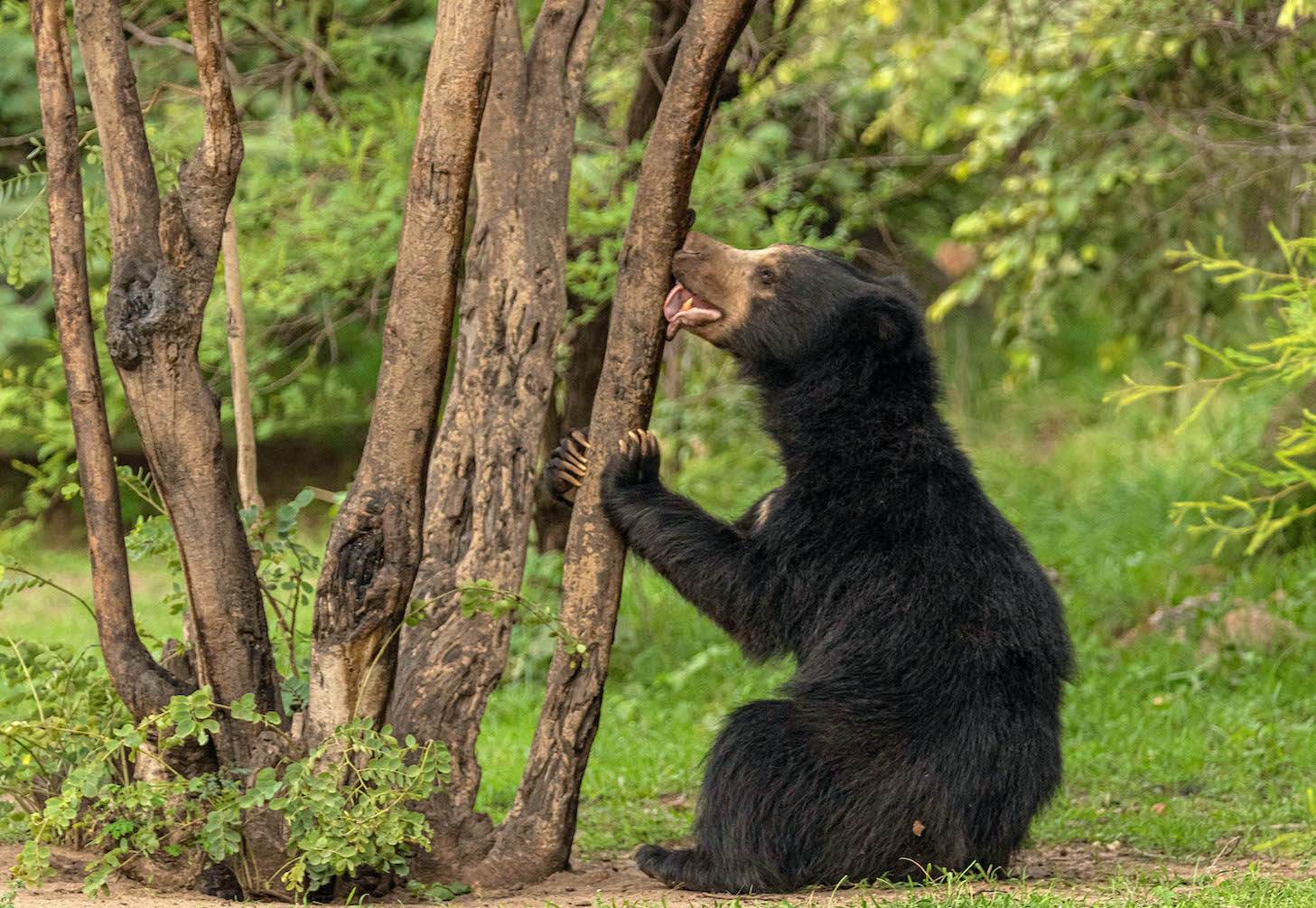 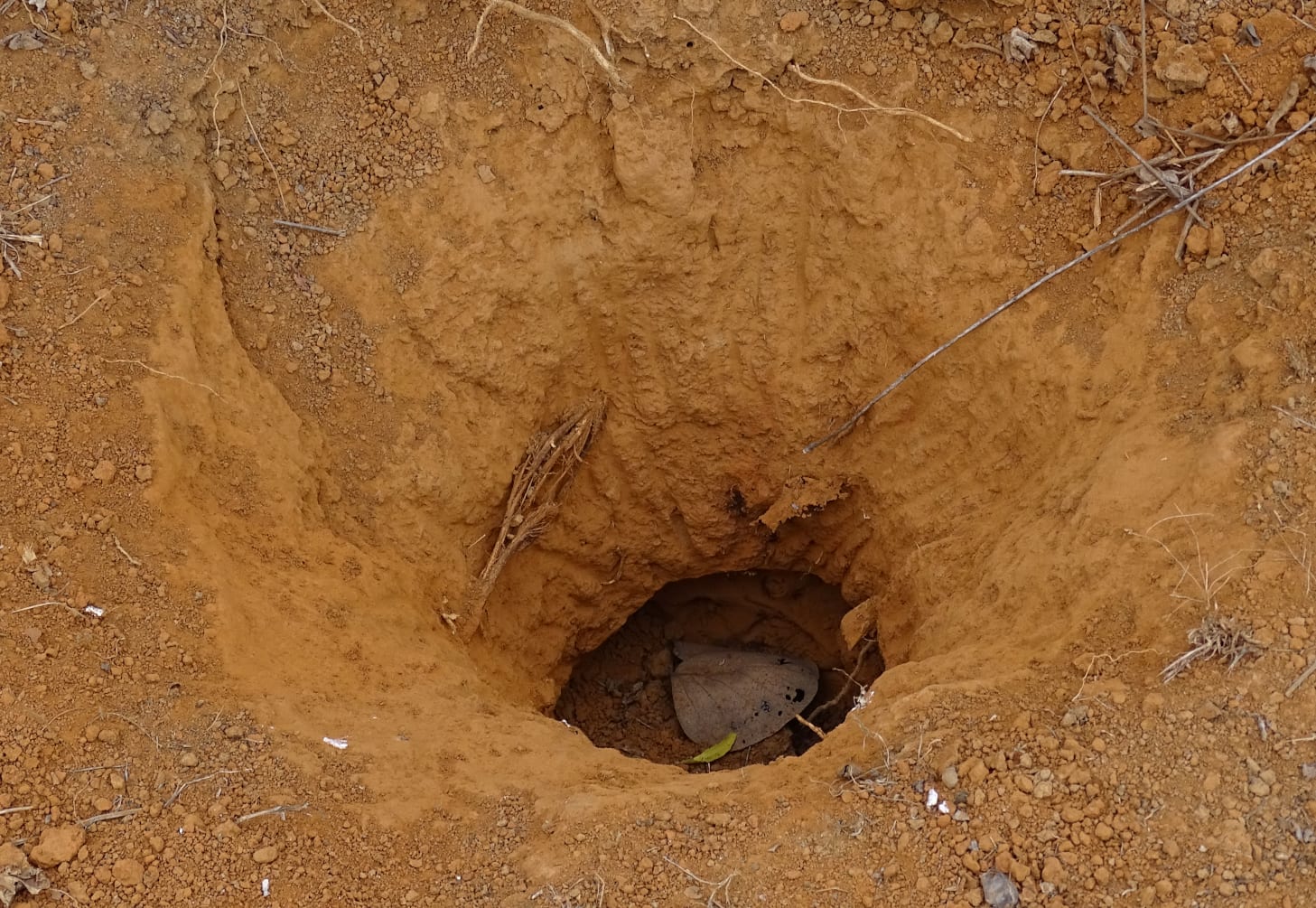 (Top) Can you spot the honeybees in the video? The coarse shaggy fur of these mostly nocturnal bears protects them from insects and honeybees. (Above left) Primarily insectivorous, sloth bears lack upper incisors, an adaptation which allows them to use their lower incisors to scrape bark from trees and suck up the insects underneath with their tongue. (Above right) Claw marks in the soil reveal the identity of the animal that dug this hole. Bears use their
long claws.
Video/GIF (top) and photo (above right): Debadityo Sinha/Vindhyan Ecology & Natural History Foundation,
Akshay Manwani (above left)

One of the most striking features of sloth bears is that they have fairly long, thick, and curved claws. They help them to dig deep into the ground, break tough termite mounds, and turn over rocks and boulders to expose insect colonies. It is the presence of these powerful claws that make sloth bears one of the most feared animals of the Indian jungle. Even expert predators like tigers and leopards like to maintain a healthy distance from them.

Adult sloth bears live a solitary life and are tolerant towards other sloth bears in their home range even during shortages of food. In their natural habitat, sloth bears usually mate between May-July and 1-2 cubs are born in November-January. Mother bears carry their cubs on their backs, a practice which keeps them safe from predators, while the long shaggy hair provides them a good grip. The cubs stay with their mother for 1.5-2.5 years, which also means there is an interval of 2-3 years between two reproduction cycles for a female sloth bear.

Though aggressive by nature, sloth bears are usually shy of human beings and are mostly nocturnal in human dominated landscapes. Unless there is drought or shortage of food, they prefer not to venture out to human settlements. However, human-bear conflict is common in areas where they compete directly with human beings over food, water, and space. Such conflicts have tended to occur inside forests when humans have entered for defecation, walking, cattle grazing, or collection of forest produce. However, with proper awareness of sloth bear’s ecology and improving its habitats, such conflicts can be minimised. 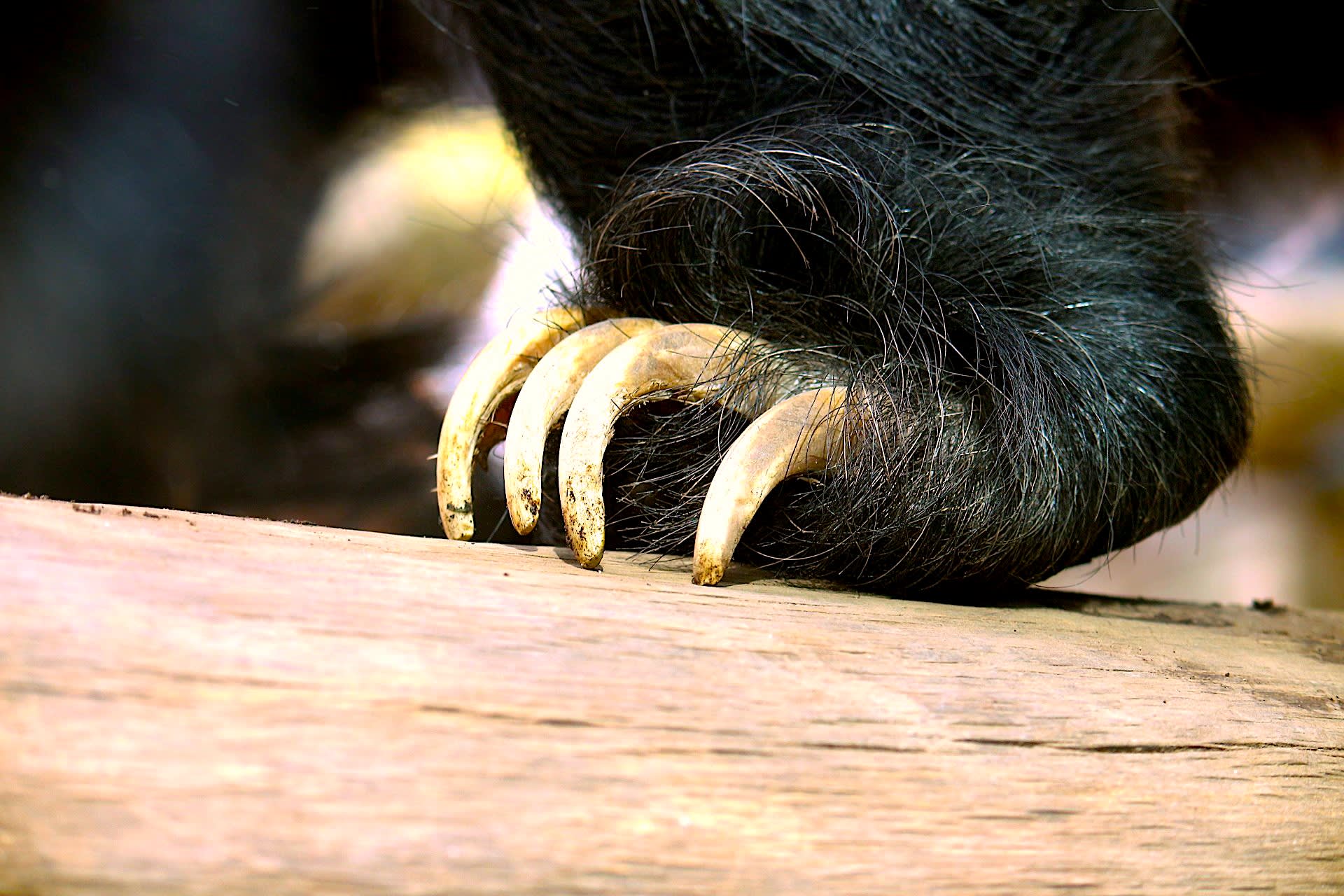 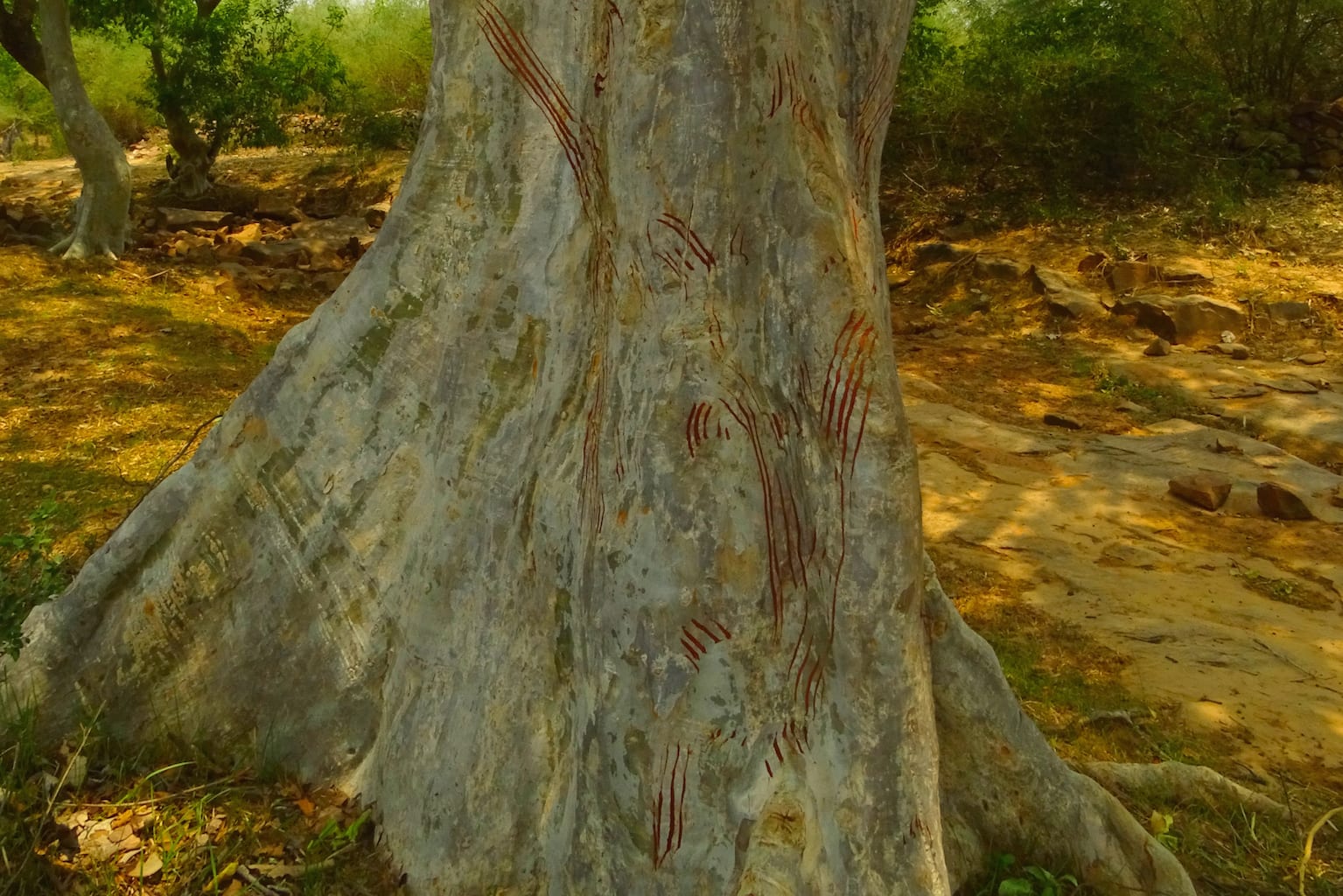 (Left) Sloth bears use their long claws to tear apart termite mounds, turn over rocks and for self-defence. (Right) While over 90 per cent of a sloth bear’s diet comprises insects during the dry season, they do climb up trees in the wet season to feed on fruits like Zizyphus, flowers, and honey.
Photos: Lilla Frerichs (left), Debadityo Sinha/Vindhyan Ecology & Natural History Foundation (right)

Once exploited as captive dancing bears, sloth bears were also hunted for body parts especially their bile, bladder, and baculum which find use in Chinese medicines and local rituals. Inclusion of this species under Convention on International Trade in Endangered Species of Wild Fauna and Flora (CITES) Appendix I and Schedule I of Wildlife (Protection) Act, 1972 has helped control poaching to a large extent but large areas of its habitat is still unprotected. Due to conservation efforts the practice of keeping them as dancing bears has also, thankfully, been completely eradicated throughout India.

Despite having a flexible diet, smaller home range, and ability to survive in harsh climatic conditions, the population of sloth bears in India is believed to be declining owing, mostly due to degradation and loss of their natural habitats. Most studies on the species have been conducted in protected areas. However, more than half the sloth bears in India are believed to be reside outside protected areas in state-owned forests, about which there is limited reliable scientific information to indicate their present population status. Such areas also lack proper monitoring and conservation management making them exceptionally threatened due to the rapid land use changes driven by deforestation, mining, diversion of forests for infrastructure development etc. Such land use change is also associated with increased human-sloth bear conflict which makes their conservation even more challenging. The sloth bear is classified as “Vulnerable” in ICUN’s Red List of Threatened Species (2016), which means it faces a high risk of extinction in the wild.

Sloth bears often wander out of the confines of protected areas in search of food and water as seen in this image from the Ratanmahal Sloth Bear Sanctuary. As bear habitats across the country become increasingly fragmented due to infrastructure projects and changing land use patterns, encounters with humans are on the rise.
Photo: Vickey Chauhan, CC BY-SA 4.0

The National Conservation Action Plan for Bears 2012, published by the Ministry of Environment & Forest, Government of India, acknowledges the importance of identifying and protecting critical habitats and corridors used by bears, especially those outside protected areas as a way forward in ensuring long-term survival of bears found in the country. However, no concrete action from the government has been forthcoming until now towards conservation of bears in India.

Some existing wildlife sanctuaries, such as Jessore (Gujarat), Ratanmahal (Gujarat), Gudekote (Karnataka) and Daroji (Karnataka) are dedicated to sloth bears. The Vindhyan Ecology and Natural History Foundation conducted a camera trap survey in Mirzapur Forest Division in 2018, to ascertain the presence of sloth bears. Based on this, the forest department forwarded a proposal for Uttar Pradesh’s first “Conservation Reserve” dedicated to sloth bears. However, the proposal is yet to see the light of the day. 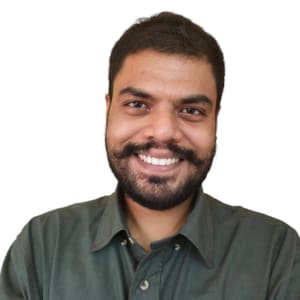 is the founder of Vindhyan Ecology & Natural History Foundation and works for conservation of sloth bears in lesser-known wilderness areas in the Mirzapur region of Uttar Pradesh.