Securing the Future of the Eastern Swamp Deer in Assam

Through a massive coordinated effort of numerous wildlife conservationists, scientists, and local experts, the population of eastern swamp deer in Manas National Park has been revived

Assam is home to some of the finest wildlife species on Earth. Many rare and endangered animals thrive in the state’s forests. Greater one-horned rhinos, elephants, Asiatic wild buffalos, tigers, and eastern swamp deer are together considered the “Big Five” of Kaziranga National Park. Thousands of tourists visit this park and Unesco World Heritage Site each year, hoping to catch a glimpse of these beautiful creatures. Situated on the bank of the mighty Brahmaputra River, the park faces annual erosion and flooding. In recent years it has experienced several catastrophic floods, in which hundreds of animals have perished. With several big hydroelectric dams under construction upstream on the Brahmaputra, the threat of flash floods in Kaziranga has increased manifold. 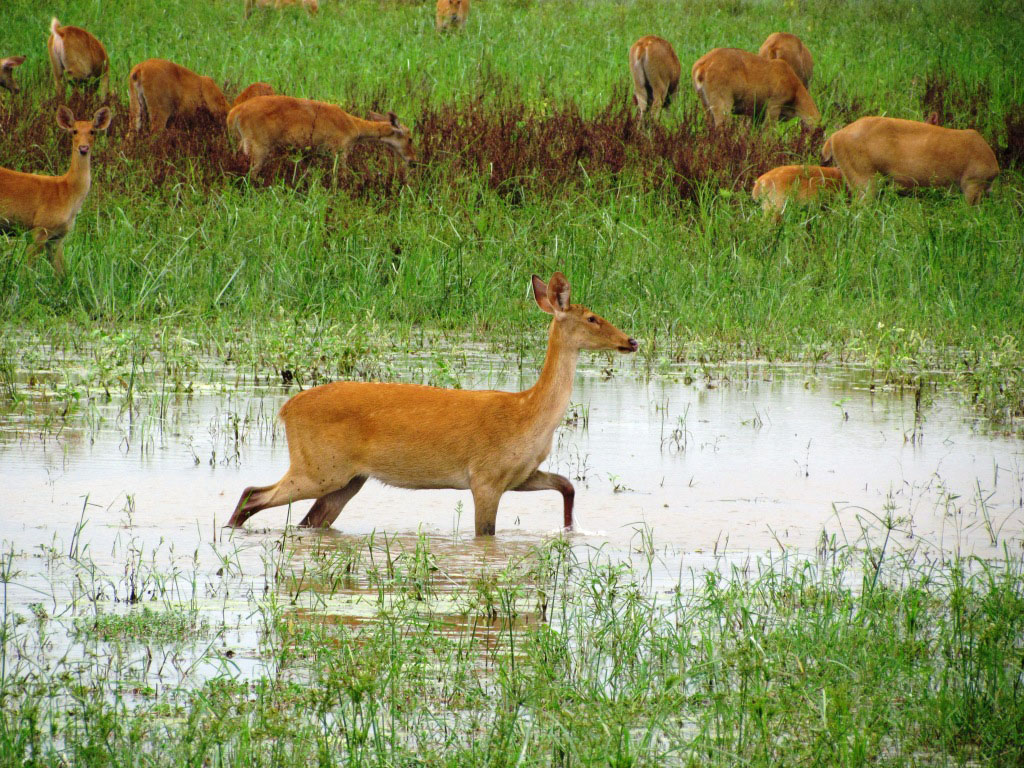 The eastern swamp deer, currently found only in the swamp grasslands of Assam, is one of the three subspecies of swamp deer. The other two are found in the foothills of Himalayas, and the forests of Central India respectively. Photo: Dr Rathin Barman/WTI

The future of any animal species is not secure if they live in small numbers in a single place. Any sudden catastrophe, natural or artificial, can wipe out the whole population of that species. For example, in May 2015, hundreds of thousands of saiga, a rare antelope found in Central Asia, died due to an unknown disease. Scientists estimate that more than 80% of its global population died in the span of 15 days, and the calamity continues with this species slowly being totally wiped out.

Scientific publications have often remarked that small populations are susceptible to inbreeding and extinction. With the reality of climate change at our doorstep, scientists are warning wildlife managers to plan and secure the future of endangered animals for at least the next 100-200 years. This is why wildlife conservationists always advocate the conservation of endangered animals in more than one habitat, in order to secure their long-term future.

Heavy floods, erosion of habitat, and biological threats such as disease acquired from domestic cattle make the eastern swamp deer vulnerable to extinction. As far as numbers go, the eastern swamp deer is more endangered than other charismatic wildlife species in India, and hence requires immediate attention and conservation efforts.

Eastern swamp deer, as the name suggests, live in swampy wetlands and grasslands. Until about 2000, several small populations of eastern swamp deer existed at various parks in Assam. But mainly because of poaching the species became confined to Kaziranga National Park. Despite scientists drawing attention to the need for a recovery plan to counter the extinction threat to this species, until recently no serious attempts were made for securing the eastern swamp deer’s survival.

In order to formulate a recovery plan for a species it is important to first understand the species, its genetic makeup, and habitat better. Scientists have suggested that conservation efforts to establish another population of the eastern swamp deer in a safer habitat should be the topmost priority to counter the immediate threats this species faces. And any strategy to conserve the species must also involve local communities.

With support from Oil and Natural Gas Company (ONGC), Assam Forest Department, and the Wildlife Trust of India, a recovery plan for the eastern swamp deer was begun in 2001. Since 2001, the Assam Forest Department-Wildlife Trust of India-ONGC team has monitored and studied this species in Kaziranga, and explored alternative protected areas in Assam where some animals could be successfully translocated.

Planning the translocation of a group of ungulates is not an easy exercise, and it involved first formulating a protocol. The capture methodology needed to be fine-tuned to ensure the animals get utmost care and minimal stress. The scientists involved with this project were well aware that a similar attempt at translocation of another subspecies of swamp deer in Central India many years ago had been unsuccessful. All the translocated animals had died of shock and capture myopathy. However, the 2000s are a different time. With careful selection of new and improved drugs, the scientists were confident that mortality could be greatly minimised, if not brought down to zero. 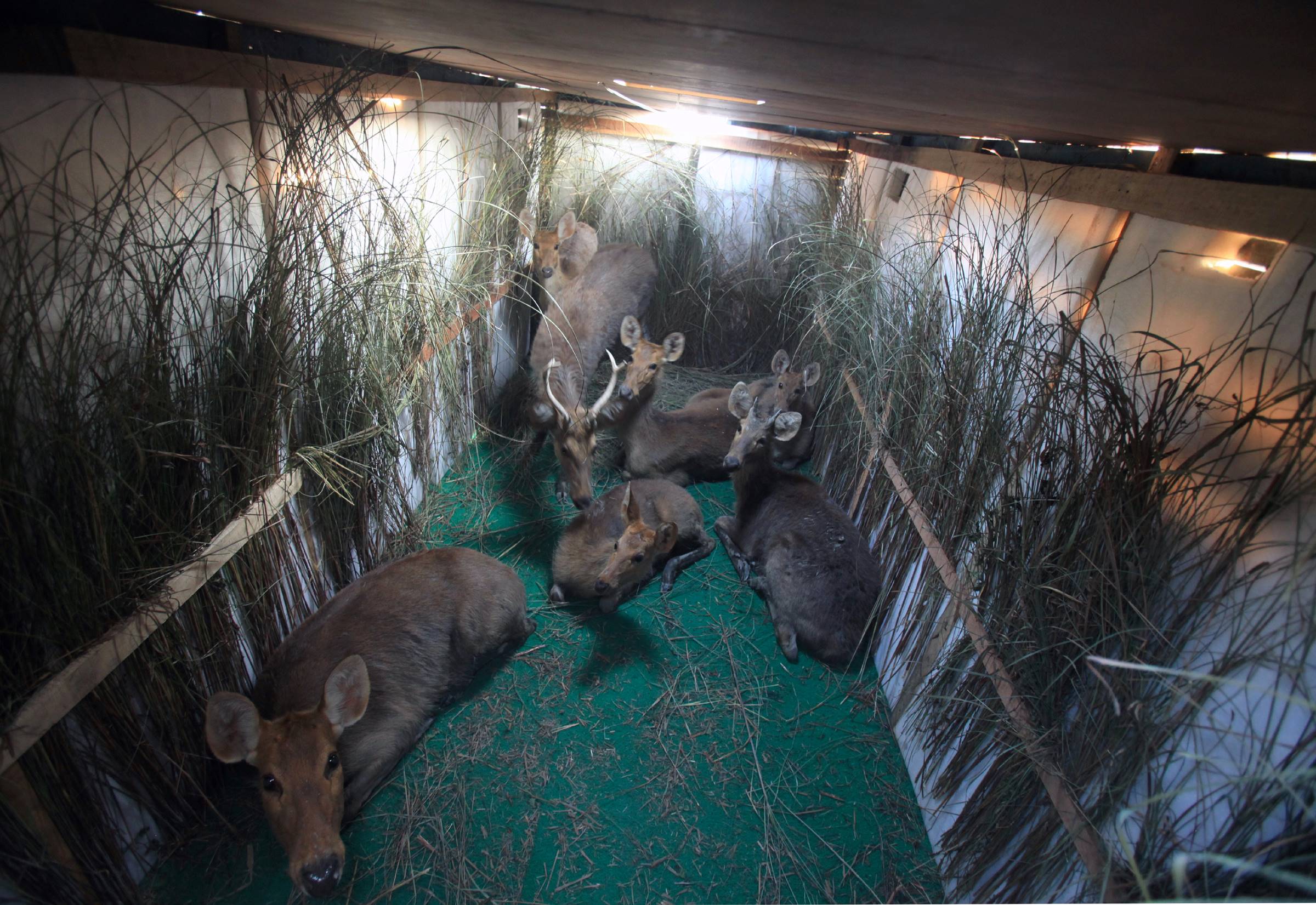 To ease the process of translocation, the eastern swamp deer were first securely shifted to a specially prepared boma, or enclosure. To make the herd feel comfortable, the boma was partially flooded with water and surrounded by grass from the adjacent landscape. Photo: Subhamoy Bhattacharjee/WTI

The protocol for the translocation of a group of eastern swamp deer was prepared after consulting many national and international experts. Since proper ecological information about this species wasn’t available, a three-year-long ecological study was carried out for this species at Kaziranga National Park, with support from ONGC. The eastern swamp deer’s food habits and preferences, habitat use patterns, dispersal ranges, herd behaviour etc. were studied, and a translocation protocol prepared. This protocol was discussed, debated, and fine-tuned with the help of top Indian scientists from the Wildlife Institute of India (WII), wildlife managers from Indian national parks, and veterinary experts from the College of Veterinary Sciences, at Khanapara.

The mass capture and translocation method (passive capture method) was the process opted for to capture a herd of eastern swamp deer in Kaziranga National Park and translocate it to Manas National Park. With this method the animal is captured without touching or injecting any chemical tranquilisers. This method was chosen to avoid capture myopathy, where animals die due to the shock of physical capture or tranquilisation. Large ungulate species are known to die when captured by the physical capture method or active capture method, which involves tranquilisation, so this method was not used.

Manas National Park was selected as the ideal habitat for this translocation for numerous reasons. In the past it had a good distribution of eastern swamp deer, but during the period of civil unrest in Assam (1998-2001), most of the animals had succumbed to poaching. With peace in Assam restored, Manas was limping back to normalcy. Additionally, a few eastern swamp deer had been spotted in certain pockets of Manas, and these stood a chance of survival if more individuals were added to the mix. Other than Manas, Orang National Park and Bura Chapori Wildlife Sanctuary are the other possible parks considered for creating an alternative future habitat for this rare species.

To capture a herd of eastern swamp deer in Kaziranga required month-long preparations in the field. A huge capture boma (enclosure) was constructed; it was about 500 m long and 300 m wide, with a conical wooden capture tunnel. Two ordinary trucks were creatively modified and placed at the mouth of the capture tunnel. Slowly deer started using the boma area. Once they were inside the enclosure, the curtain barriers of the boma were closed and they were trapped inside. Slowly they were herded towards the wooden capture tunnel. Finally in December 2014, a herd of 19 eastern swamp deer was captured in Kaziranga National Park and was successfully translocated to Manas National Park. History was created in the Indian wildlife conservation space, as the first ever successful mass capture and translocation of any large ungulate was completed. It was made possible due to the coordinated efforts of local experts and wildlife conservationists. After the success of the first translocation of eastern swamp deer, Wildlife Trust of India and the Assam Forest Department in association with ONGC completed a second translocation of 17 deer in 2017.

The population of eastern swamp deer in Manas has already shown an increase in numbers. A recent estimate puts the count in Manas at 80-100 individuals. Thus through a massive conservation effort, the eastern swamp deer has now reoccupied its original habitat in Manas.