According to conservationists, it is habitat loss and not the practice of interbreeding with domestic buffaloes that has affected the population of the Asiatic buffalo 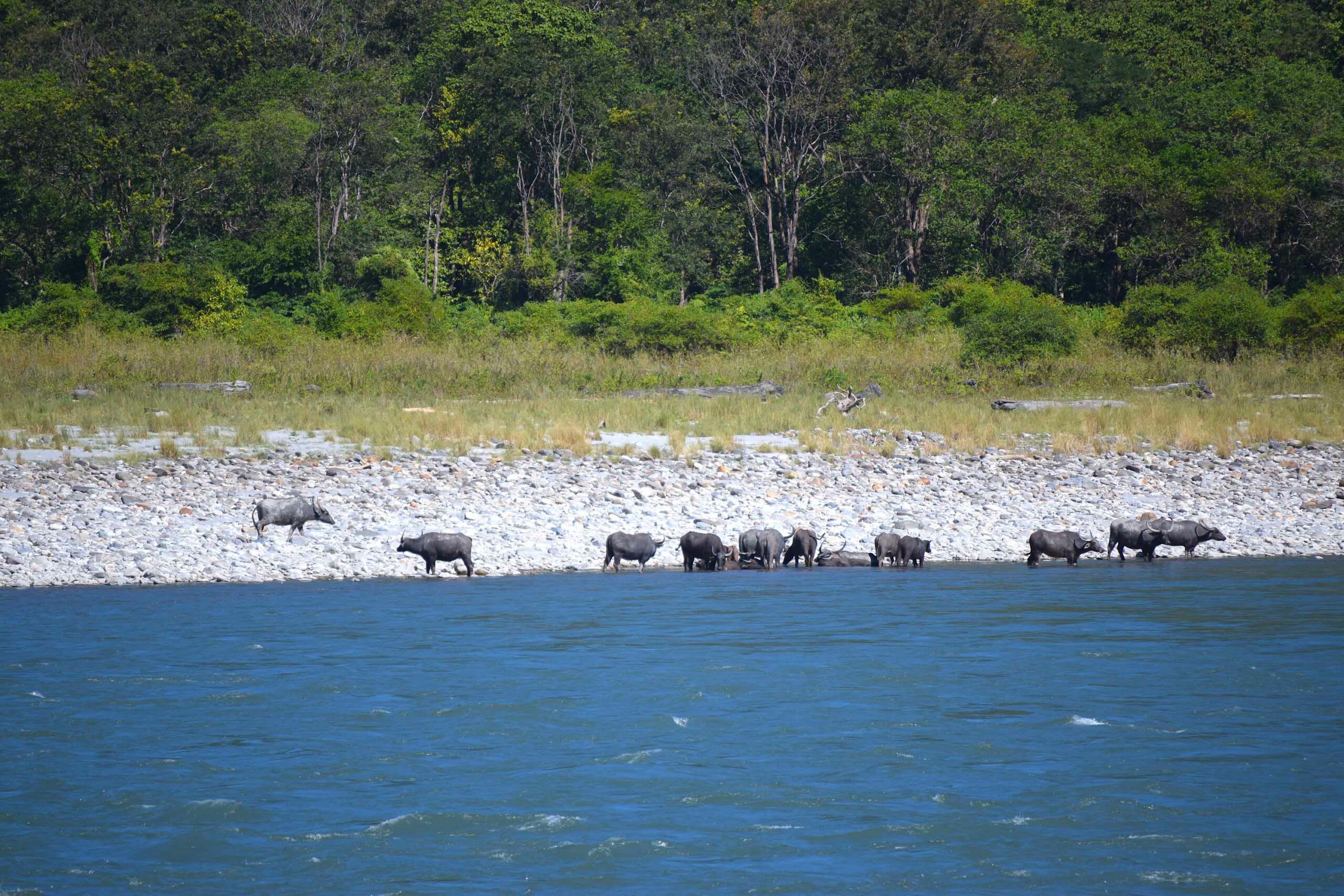 Describing the abundance of the wild water buffalo (Bubalus arnee) in Assam in his memoir Travels and Adventures in the Province of Assam (1855), Major John Butler, a British colonial military officer and sportsman, noted that during his stay in the province in mid-nineteenth century he would frequently meet with large herds of hundreds of wild water buffaloes in lower and central Assam and it was not uncommon for three or four European sportsmen to shoot thirty buffaloes in a one-day’s sport. About one and a half-century later, hunted to the brink of near-extinction, the species is listed as ‘endangered’ in the International Union for Conservation of Nature’s (IUCN) Red List since 1986.

A 2010 study estimated the global population of the wild water buffalo at 3,400 individuals, of which 3,100 (91%) live in the forests of Assam and the rest are scattered in the Indian states of Chhattisgarh (where it is the state animal) and Arunachal Pradesh, as well as Nepal, Bhutan, Thailand, and Cambodia. In Assam, the species now faces a new suite of threats. While interbreeding with domestic buffaloes is commonly identified as one of the key factors contributing to the decline of wild water buffalo populations across habitats, conservationists and experts say that, in Assam, the loss of habitat is pushing this iconic species into troubled waters.

Habitat loss the primary threat
Anwaruddin Choudhury, wildlife expert, former administrator and the author of the 2010 book, The Vanishing Herds: The Wild Water Buffalo, says that there is a general belief that interbreeding with domestic buffaloes has affected wild buffalo populations, but this seems to be incorrect as a rule. “Domestic males are usually not kept in villages on the fringes of national parks, because they are generally killed by wild bulls. In fact, it is some wild bulls, which regularly come out of the parks, that mate with domesticated females. Therefore, the gene flow is mostly one-way, wild to domestic, and is unlikely to affect any substantial wild population,” Choudhury says. He further says that the wild herds maintain a high degree of segregation from domestic animals and do not mix with grazing domestic buffaloes.

Breeding domestic buffaloes with wild buffalo bulls is a long-established cultural practice in Assam. Describing this practice of interbreeding, John M’Cosh wrote in Topography of Assam (1837), “It is the practice of the country to breed from the wild buffaloes; no males are kept by the feeders; the tame herd is driven towards the jungles, where they meet with the wild bulls which continue in the herd during the season.” Assamese writer Hemchandra Baruah too narrated in his Path Mala (1883) how a buffalo herder would let his buffalo go out to the wild and mate with wild buffaloes which would lead to her giving birth to a healthy offspring that the herder would be able to sell for a good sum. Colonel Pollok and W. S. Thom’s hunting guide Wild Sport in Burma and Assam (1900) similarly notes, “There are seldom any buffalo bulls kept in Burma or Assam, but the people trust the wild ones to keep up the breed. There is therefore but little difference, if any, in size and ferocity between the so-called tame cattle and the feral.”

S. Singh, a buffalo herder in Kobo Chapori near Dibru-Saikhowa National Park in eastern Assam, says, “Until 1998, there were wild buffaloes in Kobo Chapori. Bulls from the wild herd would come to our herd and mate with the domestic females. This was beneficial for us as the calves born out of interbreeding were often healthier than those sired by domestic bulls. As it is only wild bulls that mate with domestic buffalo and not the other way round, it does not affect the wild population.”

Choudhury holds habitat loss and degradation as the primary threat to the species in Assam and considers effective protection and management of existing habitats, as well as reintroduction in select former habitats, as the key to the wild buffalo’s long-term survival in Assam.

The wild water buffalo uses wetlands (42.29%) and short grasslands (37.01%) as its primary habitats, followed by the tall grassland habitats (15.83%) with minimal use of woodlands (4.78%), according to a 2014 doctoral study at Gauhati University that looked at the annual habitat selectivity of the wild water buffalo in Kaziranga National Park, the key protected habitat that hosts over 1,400 individuals of the species — nearly half of Assam’s wild buffalo population. What is worrisome for the future and long-term survival of the wild buffalo in Assam is that recent research indicates an alarmingly rapid decline of wetlands and short grasslands, the species’ preferred habitats. Likewise, erosion of riparian tracts also contributes to the loss of wild water buffalo habitats.

Loss of wetlands, marshes, and grasslands
The Assam Remote Sensing Application Centre has identified 3,513 wetlands in the state, spread over 764,372 hectares – 9.74% of the state’s area. A study published in the journal River Research and Applications in 2020 finds that between 1988 and 2018 the Kaziranga National Park has lost 1114.7 ha waterlogged wetland (31.3%), 425.5 ha marsh/swamp (70.4%) and 394 ha of grassland due to land cover transition caused by siltation, flood, erosion, and spread of exotic and invasive species among other factors. The Brahmaputra floodplains landscape is known to be dynamic, and accretion of land naturally counteracts erosion, but the study points out the fact that “it takes several years of vegetation succession to regenerate back to forest” to act as suitable wildlife habitats.

As the alarming loss of wild water buffalo habitat — wetlands, marshes, and grasslands — becomes evident in the findings of the study, conservationist Choudhury says, “Wetlands, marshes and short grasslands are crucial for the animal’s survival because it depends on submerged vegetation in shallow water bodies. The wild buffalo spends a majority of the time grazing and wallowing on swampy lands.”

Erosion poses another serious threat to wild buffalo habitats. Kaziranga National Park has lost an area of  5,342.6 ha to erosion at the rate of 184.2 ha/year during 1987-2016, according to a 2019 study by Tezpur University. Similarly, the Dibru-Saikhowa National Park, which is a complex of wetlands, grasslands, littoral swamps and semi-evergreen forests, an ideal habitat of the wild buffalo, lost an area of 77.14 sq. km. to the widening Brahmaputra and the Dibru river between 1990 to 2006, according to this estimate.

In several protected areas across Assam that harbour wild buffalo populations, invasive species are threatening the native vegetation cover through conversion, especially from grassland to scrub forest with potential impacts on various herbivorous species including the one-horned rhinos. From 1987 to 2008, Orang National Park, another protected area where the wild buffalo is found, saw its wet alluvial grassland shrink by 12.8 percent, and dry savannah grassland and degraded grassland increase by 9.25 percent and 6.51 percent respectively, mainly due to the impact of the invasive tree species Mimosa, according to a 2011 study on land cover change in the park. A potential threat lurking on Kaziranga’s doorsteps is Ludwigia peruviana (Peruvian water primrose). A 2017 study found that this semi-aquatic weed has damaged around 200 square kilometres of marshland plant communities in Karbi Anglong district, where part of Kaziranga is located.  Ludwigia, an invasive aquatic plant, will likely infest Kaziranga marshlands if no measures are taken to check its spread. Water hyacinth (Eichhornia crassipes), an exotic species, occurs in most of the wetlands of Kaziranga which curtail the spatial extent of water bodies and cause degradation of wetlands. The species initially grow on the periphery of wetlands and eventually convert the entire wetland into vegetation cover.

An expanding agrarian frontier
In addition to these natural factors, the expansion of agriculture into previously unclaimed riparian tracts is also responsible for the loss of wild buffalo habitats. Outside protected areas, wetlands — the wild buffalo’s preferred habitats — are often considered as wastelands to be reclaimed, to be drained, or farmed upon. The British colonial government in Assam classified wetlands, reeds and grasslands between cultivated fields as wastelands and encouraged reclamation of these lands for agricultural purposes, which contributed to decline and fragmentation in wild buffalo ranges. The government’s push to grow more food grain during the Second World War led to conversion of massive areas of riparian grazing tracts into enclosed paddy fields in Burhachapori near Kaziranga National Park in central Assam.

Mahendra Upadhyay, 70, a cattle owner from Ganeshghat in Sonitpur district whose father used to keep buffaloes in Burhachapori, says prior to peasantisation of the forests and the khutis (buffalo and cattle herding encampments) of Burhachapori, the area hosted several herds of wild buffaloes. “We would often encounter large wild herds until the late 1960s. My father depended on wild bulls for breeding and didn’t keep male buffaloes in our khuti. As the government opened grazing tracts for agrarian expansion and large swaths of grazing lands were encroached for the purposes of enclosed farming, the wild herds started diminishing. Now there is hardly any resident population of wild buffaloes outside the protected area in Burhachapori.”

brings you news and inspiration from nature's frontline.