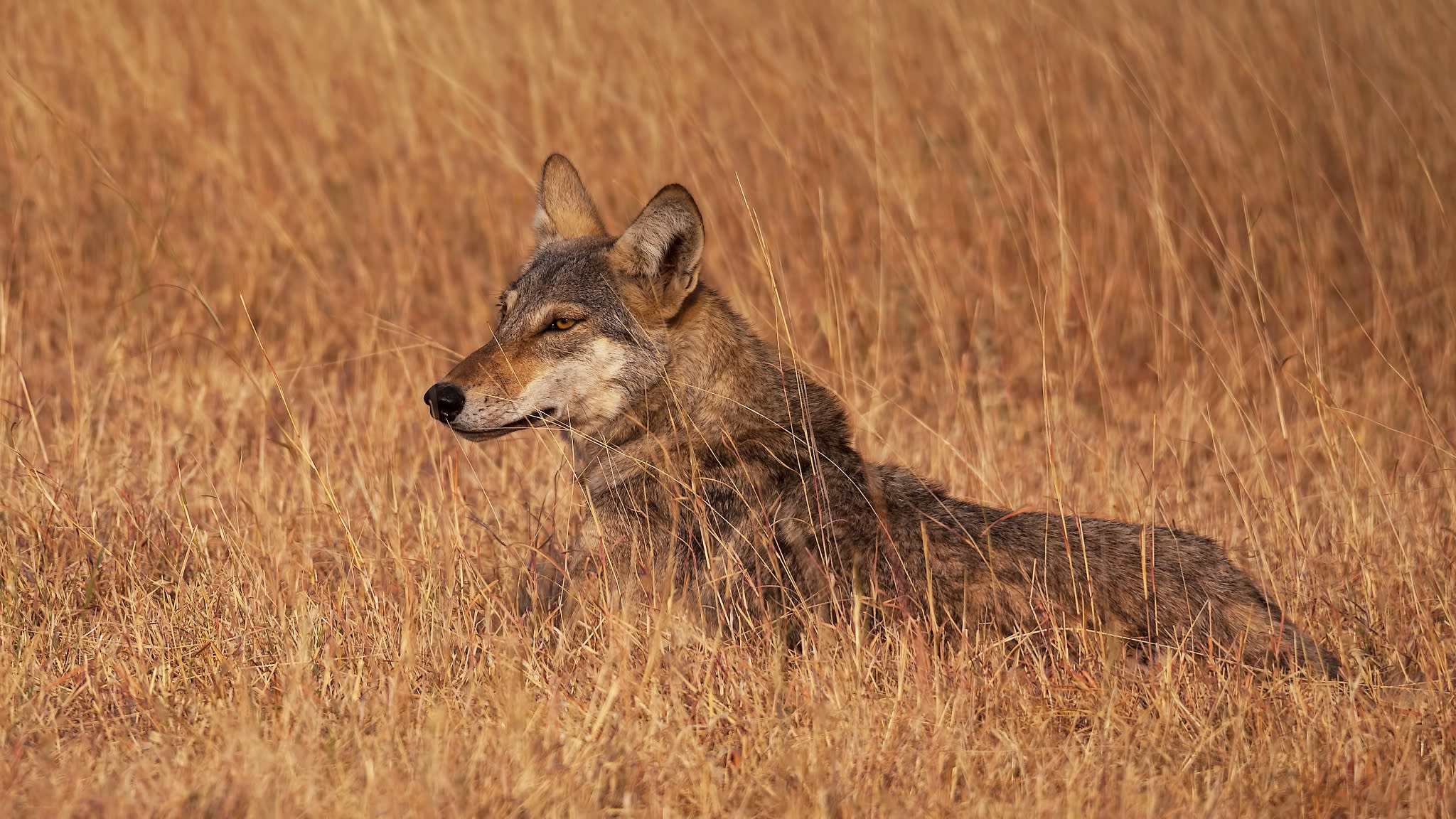 The quest for bauxite in the bordering areas of Chhattisgarh-Jharkhand poses a threat to the future of the Mahuadanr Wolf Sanctuary, which is India’s only protected area for wolves, besides adversely impacting the Burha river.

Bauxite mining started in Jharkhand’s Orsa village, approximately 2.5 kilometres from the wolf sanctuary, in 1986 over an area of 309.36 hectares. Initially, the lease was granted till 2006 but was extended in 2017 on about 196 hectares of non-forest land till 2036.

However, in 2018, it was stopped after the authorities issued a draft notification specifying the eco-sensitive zone around the Mahuadanr Wolf sanctuary. In 2019, the final ESZ specifying the extent of the ESZ around the sanctuary was notified by the Indian government’s environment ministry. But the locals from Orsa who stood against mining allege that it is continuing in the adjoining Balrampur district of Chhattisgarh and that is a cause of concern.

Spread over an area of 63.256 square kilometres and about 194 km from the state capital Ranchi, the sanctuary is in the Latehar district of Jharkhand. In addition to over 90 wolves, the wolf sanctuary is also home to sloth bears and has a healthy population of leopards as well.

Jharkhand’s social activist Shashi Panna explained to Mongabay-India that the final ESZ declaration is limited to Jharkhand but mining is continuing in Chhattisgarh in the bauxite mines of Hindalco that are operational over an area of 3,741 ha. “It is Chhattisgarh’s prerogative,” said Panna while referring that stopping the mining activity in the Chhattisgarh side is not in Jharkhand’s control.

Jharkhand-based wildlife expert D.S. Srivastava, who is based in Palamu district, echoed similar views but said, “if a sanctuary falls on the border area of two states, the centre should take a stand.”

Bauxite mining a cause of distress for the Burha river

Orsa’s resident Wakil Ahmed highlighted that due to mining, the perennial Burha river, which originates from the bauxite-rich area of Chhattisgarh, is also drying up.

The Burha river after entering Jharkhand flows from near the Orsa village and then passes through the middle of the Palamau Tiger Reserve (PTR) and is considered its lifeline. The wolf sanctuary is 64 kilometres away from the PTR and comes under the latter’s administration.

Jharkhand’s Lohardaga and Gumla districts adjoining Latehar are rich in bauxite deposits. In Lohardaga, Hindalco already has seven out of nine active mines. The district already has the approval of mining for approximately 1.1 million (11 lakh) tonnes of bauxite per year.

Both Jharkhand and Chhattisgarh are mineral-rich states. While Jharkhand has about 40 percent of India’s total mineral deposits Chhattisgarh is not too far behind. It has 168 million tonnes of bauxite which is mainly found in Surguja, Jashpur, Kanker and Kabirdham districts. In 2016-17, it contributed about 7.92 percent of bauxite production in India.

Mahalinga, a former official with the PTR who now works in the social forestry department, said both the Orsa mine and Chiro-Kukud mine of Hindalco Industries Limited in Jharkhand which are at a distance of 2.5 km from the wolf sanctuary used to be operational but have been shut down.

“I wrote to the then PCCF (principal chief conservator of forests) (wildlife) RK Singh of Chhattisgarh in 2018 regarding rampant mining and requested that it should be stopped. The whole catchment area of Burha is being destroyed by mining. If the river dries up, PTR will be affected.”

On this, Wakil Ahmed said that the Burha river, which flows from near Orsa, needs to be secured. “If water is not available, how will we live? The river flow is getting reduced. This will affect people living downstream and hand pumps may run dry in future,” Ahmed said.

Bauxite mining in Chhattisgarh and Jharkhand has taken a toll on the health of Burha river. Photo: Special arrangement
A representational image of an Indian wolf from Gujarat. Cover photo: Vadyarupal/Flickr

Former divisional forest officer (DFO) of Balrampur, Chhattisgarh, Vivekanand Jha, who is now posted elsewhere, said he remembers Mahalinga’s letter. “I had asked my field officers to probe the matter. It is still pending as it is a Maoist-affected area. So, that’s why the delay,” Jha told Mongabay-India.

In addition to the Hindalco’s mines in Chhattisgarh, documents reviewed by Mongabay-India reveal that there is a bauxite mine (about 257 hectares) of Indian government’s Mineral Exploration Corporation Limited in Serangdag bauxite mine block 1 in Balrampur area. Though the lease area of the mine is in Chhattisgarh, it is within the 10-kilometre distance from the wolf sanctuary in Jharkhand and thus concerns have been raised about its possible impact.

Villagers still face problems even after mining was discontinued

In Orsa, though the mining has stopped the abandoned pit is still lying open, posing a danger to humans as well as animals living nearby.

Local residents Sunita Nagesia and Dulari Devi informed that their cattle died after falling in it and complained that they have to take a detour of two kilometres every day to reach their agriculture field on the other side of the abandoned pit.

Nagesia works as a labourer and also owns a small plot of land. “I have to take a detour due to the pit which falls in my way,” she told Mongabay-India.

Besides the abandoned pit in Orsa, the ongoing mining in Chhattisgarh is affecting people downstream in Jharkhand. The Burha river leads to a scenic waterfall, Lodh falls, a popular tourist site in Latehar only and it is about 20 kilometres from Orsa. Ahmed noted that the flow of water to the waterfall is getting affected due to the impact of mining in Chhattisgarh.

Dharmsai Nagesia, another resident of the Orsa village, said the flow of the waterfall has reduced due to mining. “The river water has become polluted and wild animals in the forests who used to be regular to the river are not spotted so regularly now. The pit has been left like that but we want it to be levelled into a plain area.”

“People here do not want mines. We want our lands intact where we grow crops like maize and paddy,” he said.

It is not just the people of Jharkhand who are facing the ill impacts of mining but it is the residents of Chhattisgarh living near the mines as well who are bearing the brunt.

People of the Tatijharia village of Chhattisgarh’s Balrampur, which is within five kilometres of Hindalco’s bauxite mines, are witnessing a severe problem of dust pollution and finding it difficult to grow crops.

Anil Yadav and Rakesh Singh, of the Tatijharia village, told Mongabay-India that all the three mines of Hindalco near their village are active for more than a decade. “Due to blasting, water sources are drying up. Ideally, our area should not have been impacted due to mining but there is so much dust that it is becoming impossible to live and earn our livelihood. The dust settles on our crops affecting the yield. The authorities should take note of the difficulty we are facing and provide some solution,” Rakesh Singh told Mongabay-India.

On November 20, last month, the residents of the Tatijharia village wrote to the district panchayat complaining that the afforestation work that Hindalco had to carry out is not being done even as the company claim otherwise.