When Birdsong Fills the Tea Estates of Assam

To explore the Hollongapar Gibbon Sanctuary in Assam’s Jorhat district, I based myself at the nearby town of Nakachari, at the homely Gibbon Resort run by Diganta Gogoi. Over the course of four days, I ingested several gallons of lal cha (red tea) and doodh cha (milk tea), while gazing out at the very tea gardens that provided the leaves for my cup. The Jorhat district is a major tea growing belt, where swathes of land are carpeted in short bushes that end up as fine Assam tea. 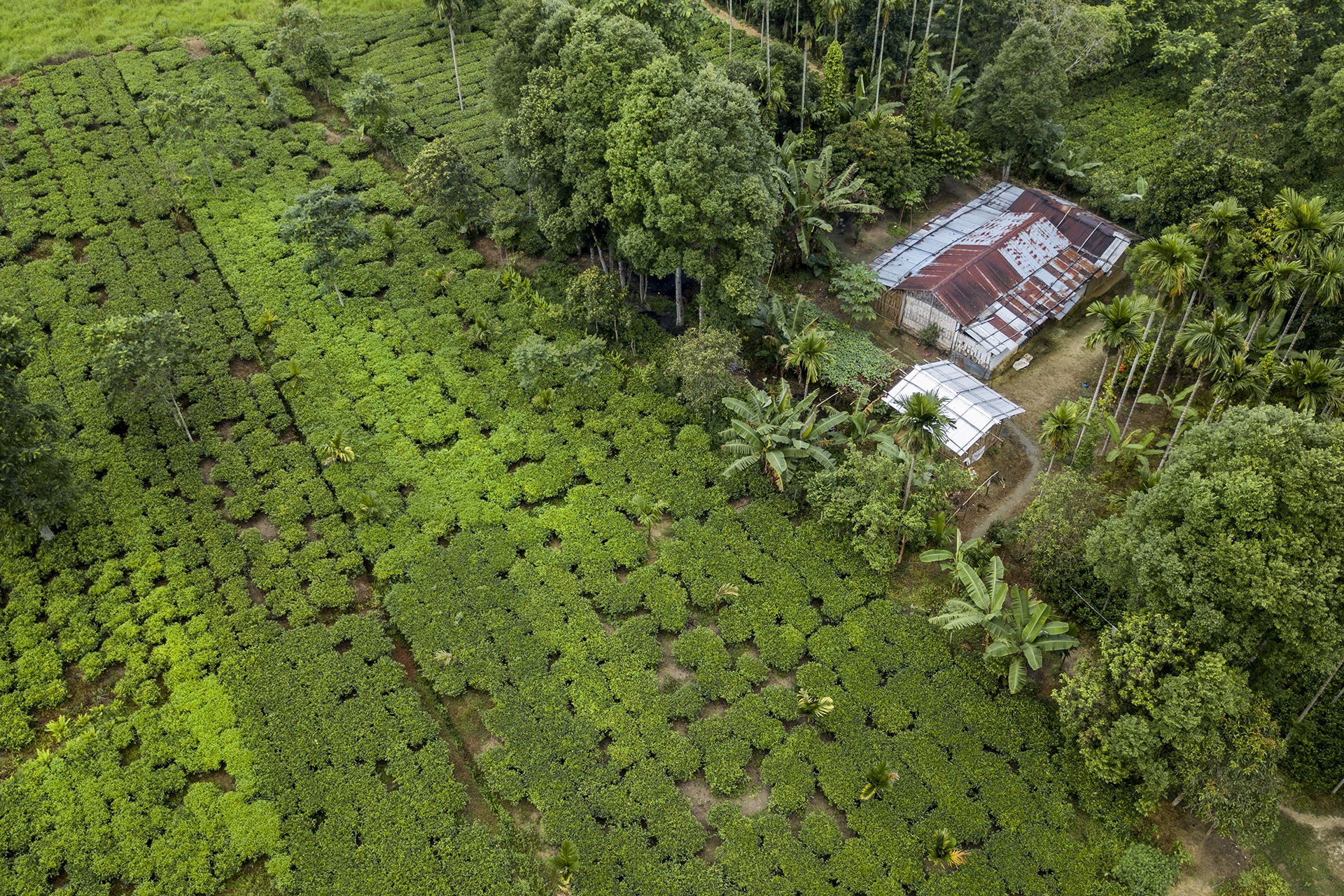 Hollongapar Gibbon Sanctuary is surrounded by lush tea gardens and small villages. By staying in the homestays or guesthouses within the tea estates, visitors to the sanctuary can experience a secondary habitat and the wildlife it harbours. Photo: Udayan Borthakur

The Hollongapar Gibbon Sanctuary is surrounded on three sides by vast plantations. There are the large industrial estates of the Tatas and Dessoi, and smaller, individually owned bagan areas, as tea gardens are locally known.

One evening, I hop across my homestay and into the endless tea fields, led by Diganta. The contiguous patch comprises several gardens, privately owned by small tea growers living in the area.

The air is crisp as we squeeze ourselves between the bushes. Every few metres, a tall tree pokes out of the carpet: there is areca nut, medicinal neem, which keeps away pests, and agar, renowned for its natural perfume. Clumps of bamboo define the fringes of the estate.

The tea estates of Assam immediately bordering the sanctuary pose certain complications for the forest, such as pesticide run-off. However, at just 20.98 sq km, the jungle does not hold enough food sources for the 10 leopards and 48 wild elephants, that live within.

While the primarily arboreal primates rarely venture out of the forest, larger terrestrial creatures are forced out in search of food. Areas surrounding the forest play host to several animal and bird species, acting as a sort of secondary habitat.

Elephants frequently wander into these tea gardens, snacking on the bamboo clumps and venturing into villages and farms in search of salt and rice. For leopards, the fat tea bushes provide adequate cover as they stealthily access villages to prey on domesticated animals like goats. The wild cats have also been known to give birth in these densely covered tracts.

Signs of animal presence are everywhere: a mango tree flattened by an elephant herd now grows at a slant; deep vertical gashes of leopard claw marks on a tree trunk.

Hollongapar Gibbon Sanctuary is home to more than 200 species of avifauna, but given the forest’s opaque canopy cover, I haven’t had many bird sightings. The surrounding tea estates, however, prove to be the prime haunt of several resident and migratory birds.

As the late afternoon sun paints the landscape gold, birds return to their perches to roost. An orchestra of calls fills the air: cooing cuckoos, chirruping mynas, the warble of babblers, and a dozen other sounds. The sudden flash of yellow I see is a beautiful black-hooded oriole.

Though black-hooded orioles like to sing, their vocalisations aren’t as melodious as other oriole species. They also emit sharp, nasal or throaty calls. Photo: Udayan Borthakur

Red breasted parakeets are the most common parakeet found in the region. They are happy feeding on a variety of fruits, specially the fruit of the Lagerstroemia trees which are often planted as shade trees in tea estates. Photo: Udayan Borthakur

We head to a rain-fed pond ringed by grass and bamboo clumps. It is late afternoon bird bath time, and if we stay very still, Diganta is sure we will spot avian creatures going about their business. After waiting a few minutes, a puff-throated babbler shows up to have a wash. A tiny taiga flycatcher — a migratory species — flies out of the bamboo and down to the pond for a drink.

The spot-throated babbler is a rare sight to behold, not only because it a small brown bird, also because it is by nature a skulking bird, one that tries its best to stay out of sight and resists observation. Photo: Udayan Borthakur

From a distance, Diganta spots a flash of red along the slender trunk of a dry neem tree. His interest is piqued. We head towards it, somehow pressing ourselves into the tea bushes. A curious black-and-white face pokes out of a neat round hollow in the tree. “A nesting lesser goldenback,” he whispers, visibly thrilled. The stunning little red-crested bird has made a home with her young in the hollow. Her partner should be returning home any time now. Every few seconds, she pops her head out and trills melodiously, signalling where she is. Sure enough, after a while, we spot the male on a tree a few metres away.

I watch the heart-warming family reunion through binoculars. To the bird in the hollow, we must look quite comical I imagine. Torsos poking out awkwardly from a carpet of waist-high tea bushes, bulky black instruments glued to our eyes. She pays us no mind, sticking her head back into her home.