The Serengeti of Saurashtra: Sightings Abound at the Blackbuck National Park in Gujarat

There’s something about the way grasslands roll towards the horizon that make one’s pulse slow down. Unless you’re an antelope, of course, keeping an eye out for predators. This explains why the herbivores after whom the Blackbuck National Park in Velavadar is named are always alert, even while life seems somnolent around them.

What is now the Blackbuck National Park was once among the many private hunting grounds of the king of Bhavnagar. This was where he organised many hunts with his famous hunting cheetahs. After Independence, the king gave up his claim to the lands and, in 1976, the park was established over an area of 18 sq km. In 1980, another 16 sq km was added. Later, a road connecting the villages of Adhelai and Velavadar was built, cutting the park into a northern and southern half. 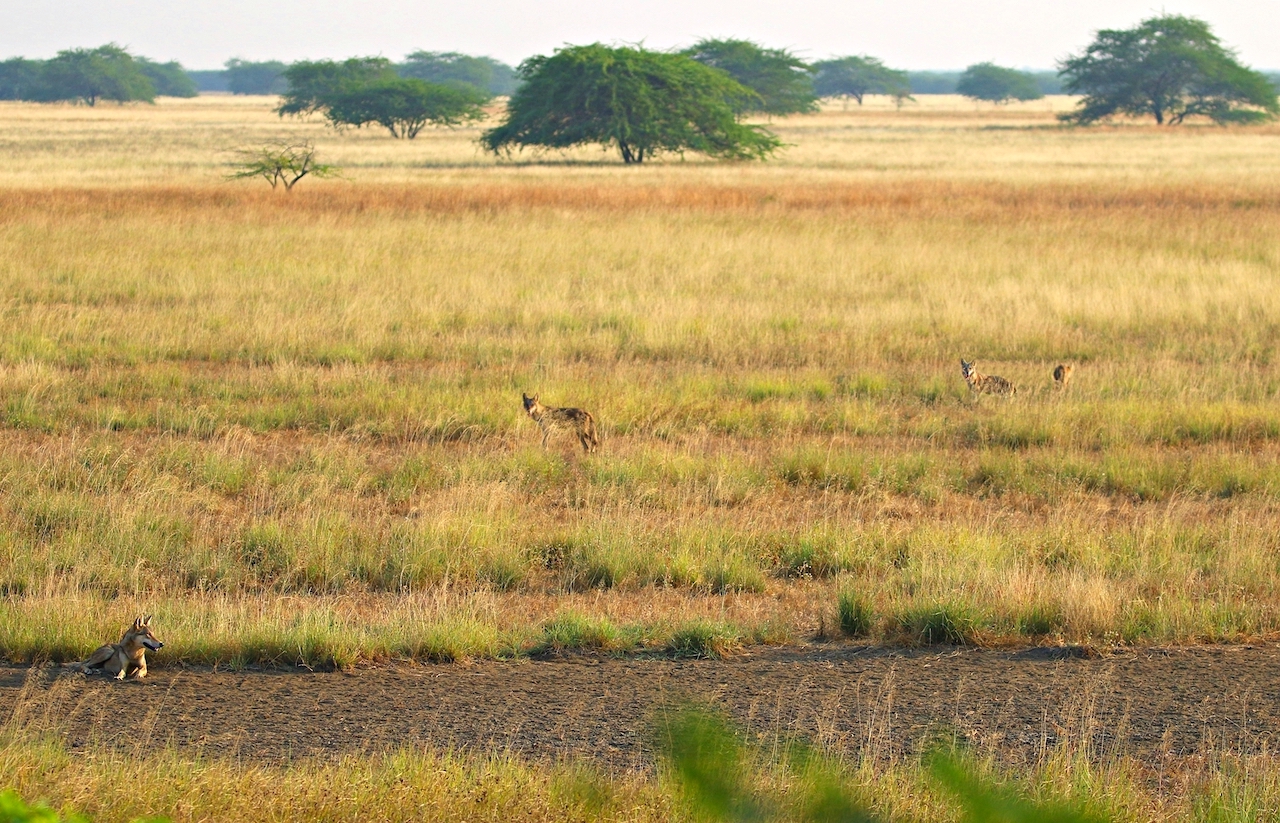 Grasslands are expansive habitats, ideal for predators like the wolf to spot prey, and for wildlife enthusiasts to observe them from a distance. Photo: Pratim Partha Kundu Like other members of the antelope family, blackbuck* are agile and athletic runners. Calves and females (pictured here) are light brown in colour while males have a darker hide that gives the species its English name. Cover photo: Dhritiman Mukherjee

The Blackbuck National Park is in South Gujarat’s Bhal district, allegedly named after the Sanskrit word for “forehead” because this flat area, devoid of large rocks, resembles a bhal with no hair or blemish on it. The reserve encompasses an array of habitats including grasslands (dense and sparse), shrubland of largely Prosopis plants, tidal mudflats, and saline land. Another habitat was added a few years ago when the authorities dammed the Ootawali River, creating a wetland. These varied habitats are bisected by the road, meaning that safaris in two parts of the same park deliver vastly differing experiences.

My own explorations of Velavadar began with naturalist Amit Vegad and Vishal Zapadiya (Gypsy driver) in the northern half, with its expansive grasslands that feel more like the Serengeti than Saurashtra. Blackbuck range across the park, but they prefer grasslands because it offers good grazing opportunities and the chance to spot approaching wolves from a distance.

Blackbuck have always been a prominent species in this region but in Velavadar they have a safe space to thrive thanks to the combination of a healthy habitat and the protection afforded by the government. Amit and Vishal smiled indulgently as I gasped at the sheer numbers of these stunning beasts trotting across the road in front of us, pronging obligingly while I filled my camera card with images. While blackbuck presence across India is fragmented and large herds are rare, groups of over a hundred antelope are common in Velavadar.

Male blackbuck (above) are easily distinguished from females, by their handsome, spiralling horns and darker bodies. Blackbuck and nilgais (below) were both prized by hunters in pre-Independence era. Photos: Dhritiman Mukherjee

Where prey flows, predator follows. This immutable law of Nature is reinforced in Velavadar by the presence of a predator as uncommon in India as its primary prey: the Indian wolf, which lives in smalls packs of up to six animals. Unlike in the rest of India, the locals here don’t hate or hunt the wolves, due to a curious relationship between the canines and the locals that farm on the fringes of the reserve.

Since the park boundaries are for humans, not animals, the blackbuck often saunter into fields to feast on the crops, causing a lot of heartburn to the farmers. Often, they have to sleep in their fields through the night to keep the herbivores out —  unless the wolves come visiting. On nights that the wolves stray out of the park and decide to lie in the fields, the farmers can go home, secure in the knowledge that the presence of the apex predator will keep the antelope and wild boar out. In other parts of India, livestock owners dislike wolves because they prey on sheep or goats. The pastoralists of Velavadar raise cows and buffaloes, animals too big to be threatened by the relatively small wolves. This unique lack of conflict coupled with the wolves’ unintended services in safeguarding crops has resulted in the predators being a source of respect for the villagers here.

The grasslands in the northern section of the Blackbuck National Park are also the best place to spot the Indian striped hyena (Hyaena hyaena). They were first spotted in Velavadar around 2003 and have since established a small but stable breeding population. Amit, Vishal, and I tracked a pair in Zone 6 of the park, and were able to drive alongside their sub-adult cubs as they strolled around their family’s grounds.

Canids are feared predators in Velavadar. The park has thriving populations of wolves (top) and striped hyenas (below), both predator of blackbuck and nilgai. Photos: Pratim Partha Kundu (top), Dhritiman Mukherjee (above)

Across the Adhelai-Velavadar Link Road, in the southern part of the park, the landscape changes drastically. In this section, the road is flanked by denser grasslands and Prosopis shrubland on the left and tidal mudflats of the Gulf of Khambat on the right. Though the sea is many kilometres away, the flatness of the land ensures the water reaches this far inland during high tide. This makes the land saline, and creates a landscape that is in sharp contrast to the rest of the park. The vista strongly reminded me of the Little Rann of Kutch, which Amit and Vishal confirmed was not just a trick of my memory. I half expected a herd of wild asses to come trotting out after the blackbuck as they made their way through the acacia trees.

The southern half also has the Ootawali wetland that attracts migratory birds like flamingos, pelicans, coots, grebes, and spoonbills — uncommon species to sight in the middle of a grassland. The rushes around the marsh provide the perfect habitat for the jungle cat (Felis chaus), which we saw on our circuit around this section. We sighted the feline while it was chasing a black-naped hare and though we might have inadvertently denied the elusive cat its meal, this happy accident left us with a sighting to savour.

Winter is a season of great diversity in Velavadar, especially near water bodies where birds such as the white stork (left) and spoonbill (right) can be sighted. Photos: Dhritiman Mukherjee

Animals frequently cross from one side to the other so neither half of the park ensures a better experience. For example, large flocks of the common crane (Grus grus ) can be found foraging warily on either side, honking indignantly as they take wing if man or machine gets too close — as we witnessed every time Vishal tried to get us into the same pin code as them. Other bird species like the drongo, silverbill, baya weaver, hoopoe, shrike, francolin, quail, and bee-eater are found on both sides of the road but are spotted more easily on the northern side due to the openness of the landscape. This, I can attest to.

While the park is famed for megafauna like blackbuck, hyena, and wolf, it actually has an avian world record: the largest roosting site of harriers on the planet. Every winter, large numbers of the marsh, pallid, and Montagu’s harriers leave their home territories in Eastern Europe and Central Asia and migrate to India. Here, in Velavadar, they gather in numbers large enough to rival the blackbuck .

Every dawn, they take off in hundreds, and make their way to the fields to feed on locusts and other insects – the main reason why farmers eagerly await their arrival. Despite this daily exodus, one can easily spot them perched on the tops of bushes and tree stumps and surprisingly (to me), very often on the ground. They are so easy to spot that Amit stopped pointing them out and Vishal halted the vehicle only if the bird was perched in an open spot, good for photography. The park’s open habitat makes it ideal for spotting other birds of prey, which I discovered when we saw two short-toed eagles, a steppe eagle, an imperial eagle, a tawny eagle, and two kestrels! 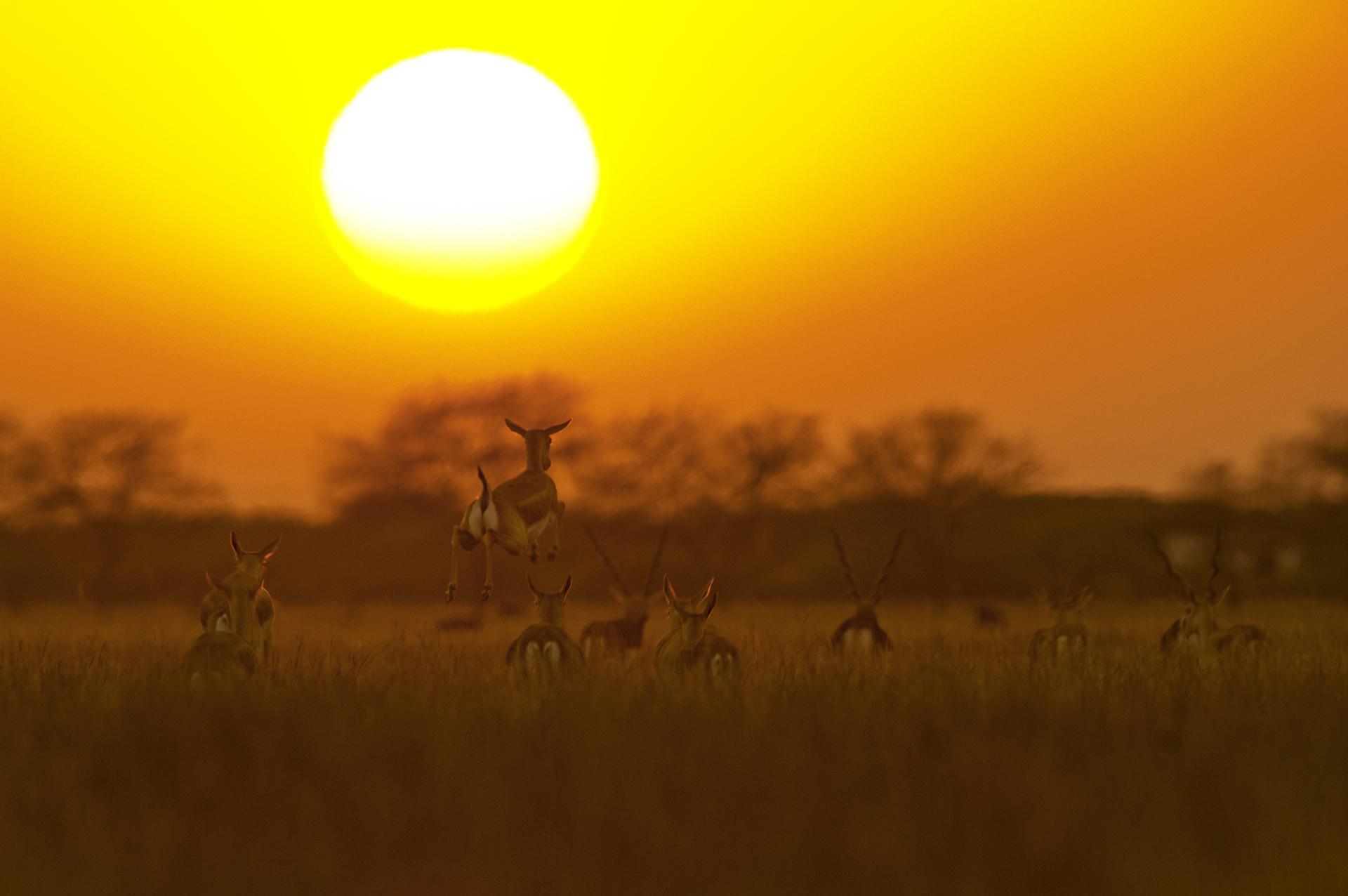 Blackbuck are social animals that roam in herds comprising numerous males and females. They are a joy to observe, especially in motion. Photo: Dhritiman Mukherjee

We also caught one fleeting sight of the lesser florican, the smallest of bustards that is exclusively found in the Indian subcontinent. Locals call it khadmor meaning “peacock of the grass” illustrating just how striking the bird is. Dressed in its breeding plumage, the male sports fine, ribbon-like feathers near the ears that rise and fall when it jumps – over 500 times a day! – to catch a female’s eye. The lesser florican is an endangered bird and Velavadar is perhaps its last stand.

The species is of great importance to locals too, evidenced by how excited Amit and Vishal were when we spotted a female, barely 30 min into our first safari together. She exploded out of the grass to our left and into flew towards the centre of the grassland. Four safaris and 25 wolf sightings later, the two were still talking about the khadmor we’d sighted. That was when I knew that in Velavadar, no matter which side of the park one visits, one is always left on the right side of tranquillity. 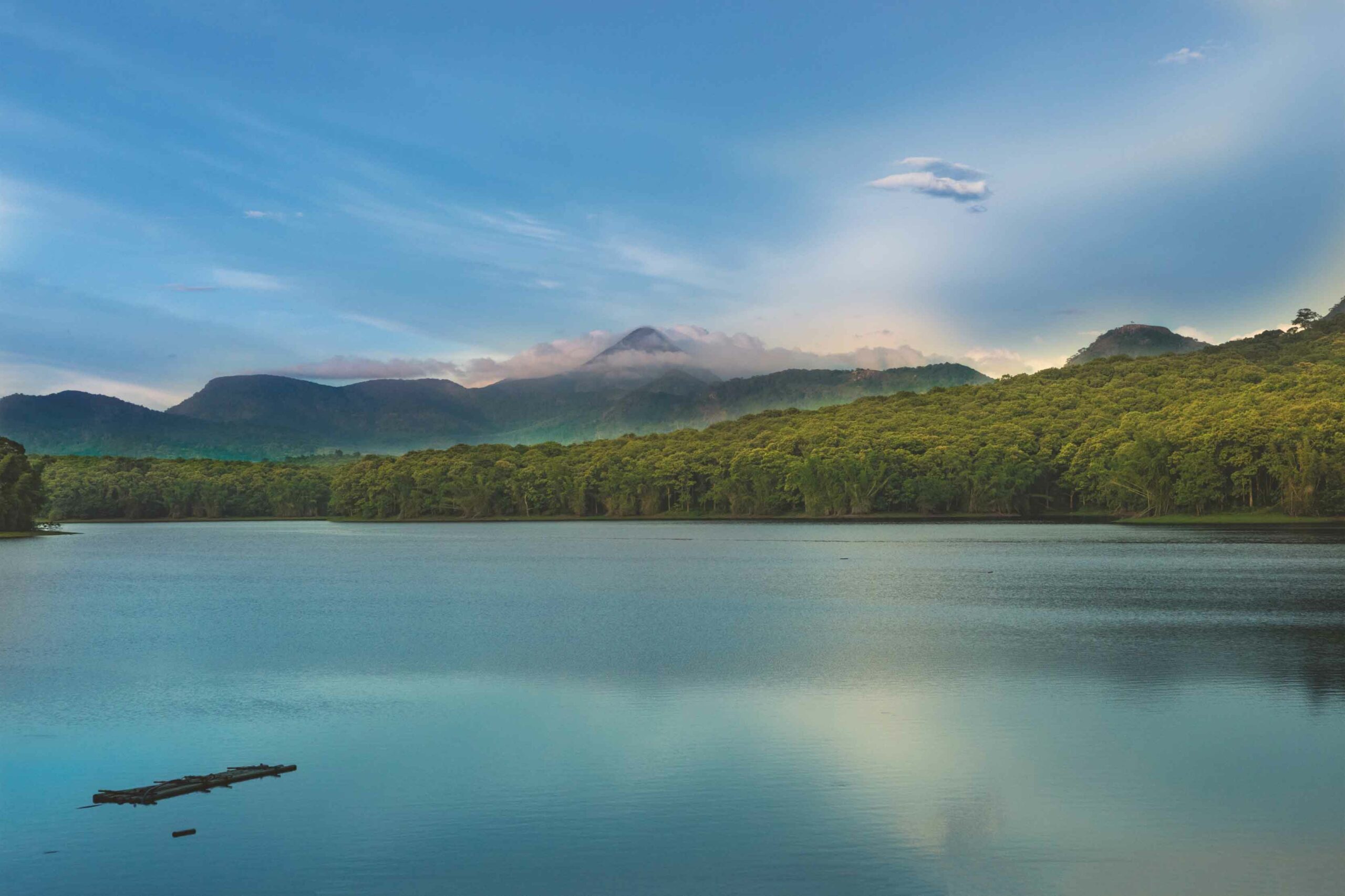