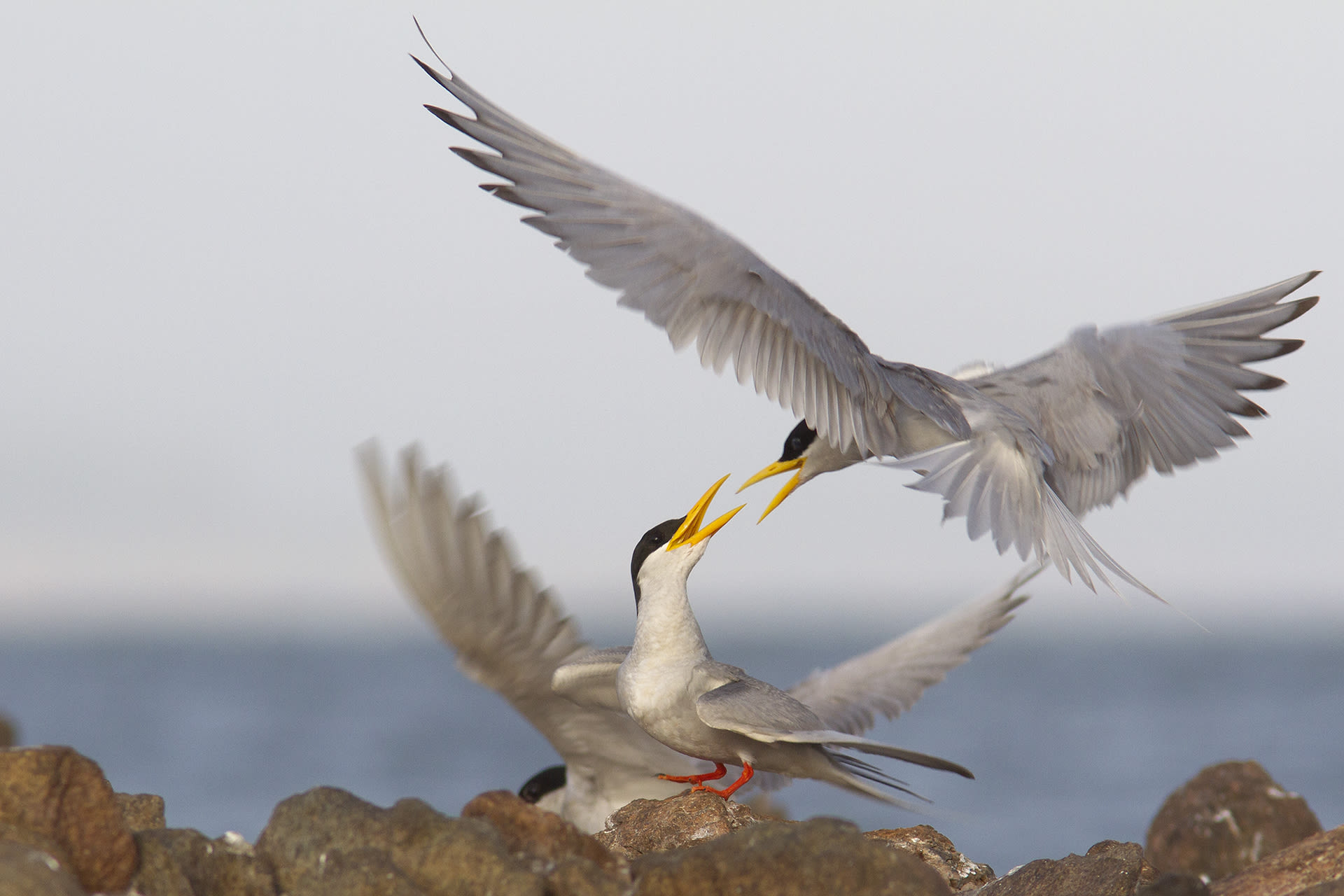 In the muggy afternoon heat, everything is still. There are gentle ripples on the water surface near the bank, but the large Bhadra reservoir stretching out to the horizon is relatively calm. A handful of mounds rise above the waters, scattered in the distance. At the far end, dark grey clouds hang in clusters, perhaps carrying April showers, but don’t pose an immediate threat. Our little boat, hired for an early morning safari, sputters to life, revs a bit and slowly pushes off from the pier. The staccato sound settles into a dull drone, merging with the steady silence. An egret flies overhead, languorously flapping its wings; a cormorant perched on a tree stub sticking out of the water gives us a nonchalant look.

But as the boat approaches the nearest islet, the muted buzz gets louder gradually. and eventually transforms into a shrill cacophony. What seemed like a deserted land mass from afar is actually filled with hundreds of birds, some on the ground, others flying about. Every year, March marks the peak mating season for river terns and they arrive in thousands at a couple of islets in Bhadra Reservoir abutting the Bhadra Wildlife Sanctuary (BWS) in Karnataka.

The Bhadra Wildlife Sanctuary gets its name from the Bhadra river, that flows through its lush habitat, sustaining its vast landscape. Cover Photo: River terns are extremely social birds that inhabit freshwater lakes and rivers, where they are usually seen in large flocks.

River terns are dramatic-looking little birds with a bright yellow beak, red legs, black crown, greyish wings, white underside, and a harsh, strident call. They are also extremely vocal and keep up a constant racket through the day. Though they can be seen only three months in a year, they are one of two main highlights of BWS. The other, of course, is the tiger whose setting is a far cry from that of the terns.

Approached from one of two gates (Lakkavalli and Muthodi), the sanctuary is spread over 492.30 sq km and lies in Karnataka’s Western Ghats. It is part of the Sahyadri range and is situated across the districts of Chikmagalur and Shimoga. It is shaped like a distorted E: two large adjacent segments of forest separated by the Bababudan hills. The upper half is Lakkavalli range while the lower part is Muthodi Range or Jagara Valley  — both hilly and covered by thick forests. The lower parts are also covered in carpets of grassland and lush sholas.

The backwaters of Bhadra see one of the largest congregations of river terns in India, that turn up here to feed, nest and raise young ones.

The sanctuary is classified as a tropical moist forest — a major portion is moist deciduous forest while the rest is dry deciduous and semi-evergreen sholas, filled with trees of teak, rosewood, honne, (pterocarpus marsupium) matthi (terminalia elliptica) and tadasalu (sterculia foetida). It is also dotted with marshy patches, called hadlu, which are moist throughout the year and have luxuriant grass, providing sustenance for herbivores. The terrain is wildly undulating with varying altitudes. Kallathagiri is the highest peak (1875 mts) within the sanctuary while the state’s highest peak, Mullayanagiri (1914 mts) touches the sanctuary’s boundary. A major highlight of the sanctuary is a massive teak tree in the Muthodi range, towering 32 mts in height and with a girth of 5.1 mts. It is estimated to be over 400 years old and is lovingly called Jagara Giant, the sanctuary’s living monument.

River Bhadra (and many of its tributaries) drain the sanctuary — a massive dam on the river has resulted in the Bhadra Reservoir which forms the western border for the top half of the reservoir. In summer, when the water level of the reservoir dips and the islets emerge, they are favoured by the river terns which prefer them due to absence of predators. You can take jeep safaris to see the wildlife, and special boat safaris just for the birds on the islets. 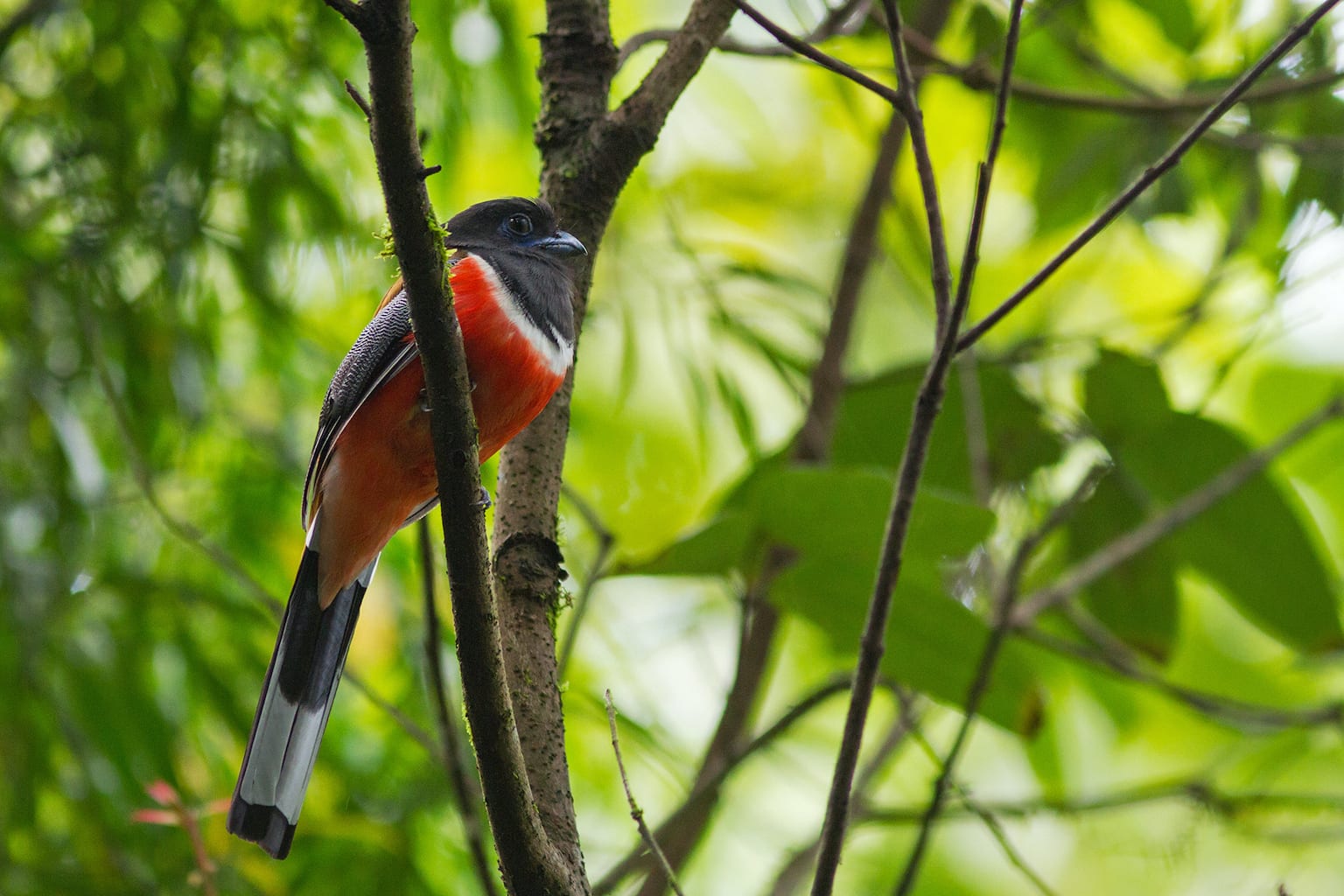 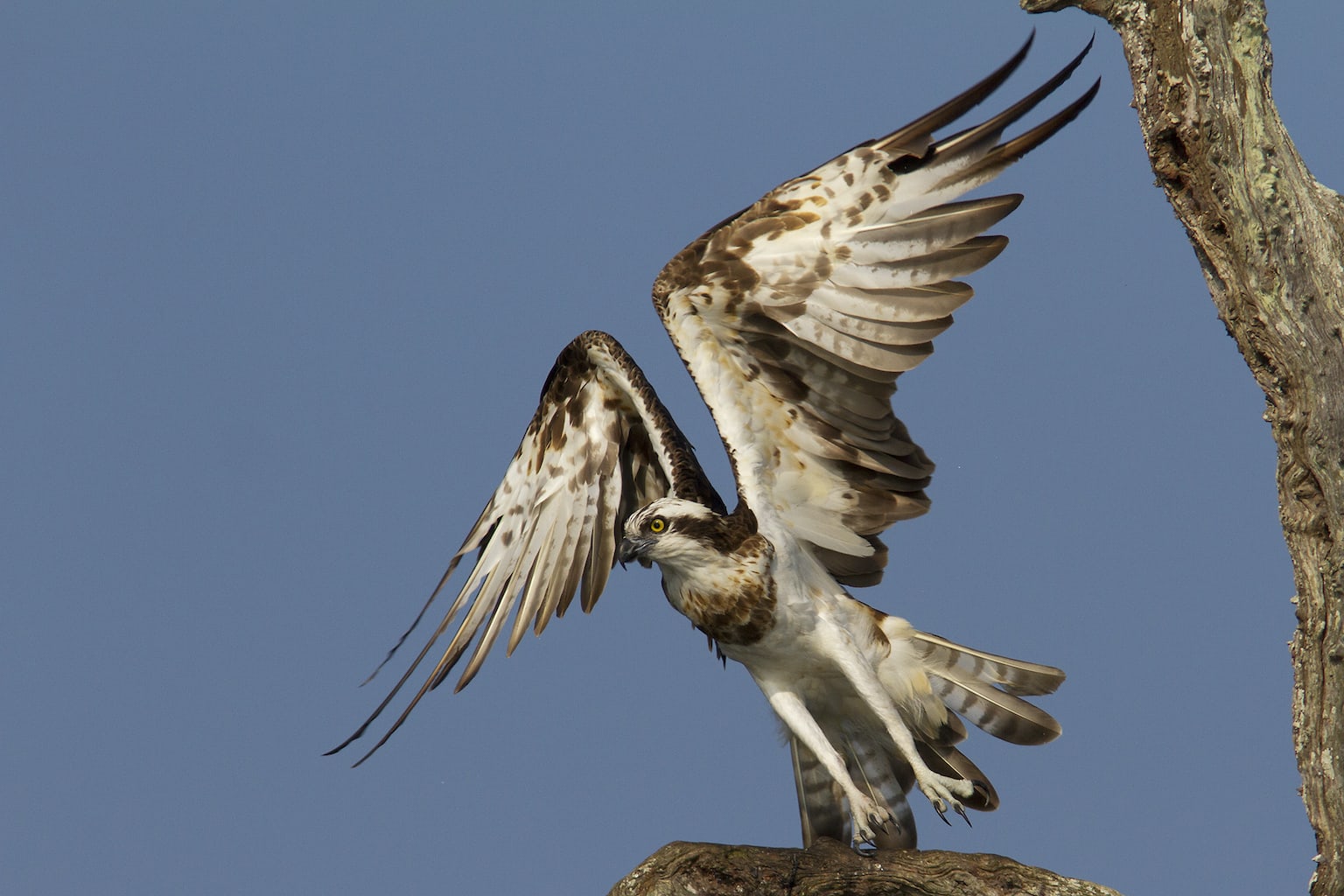 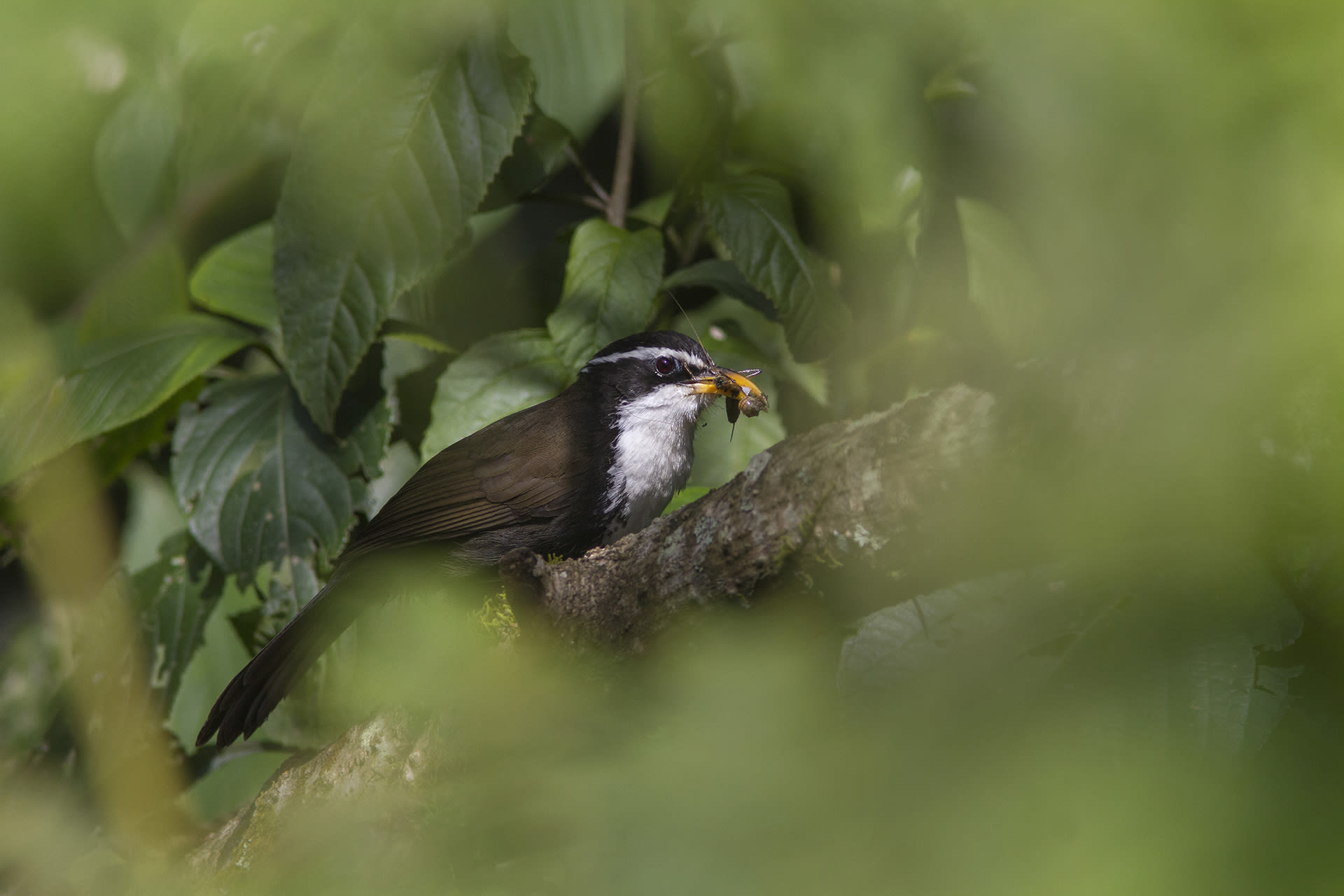 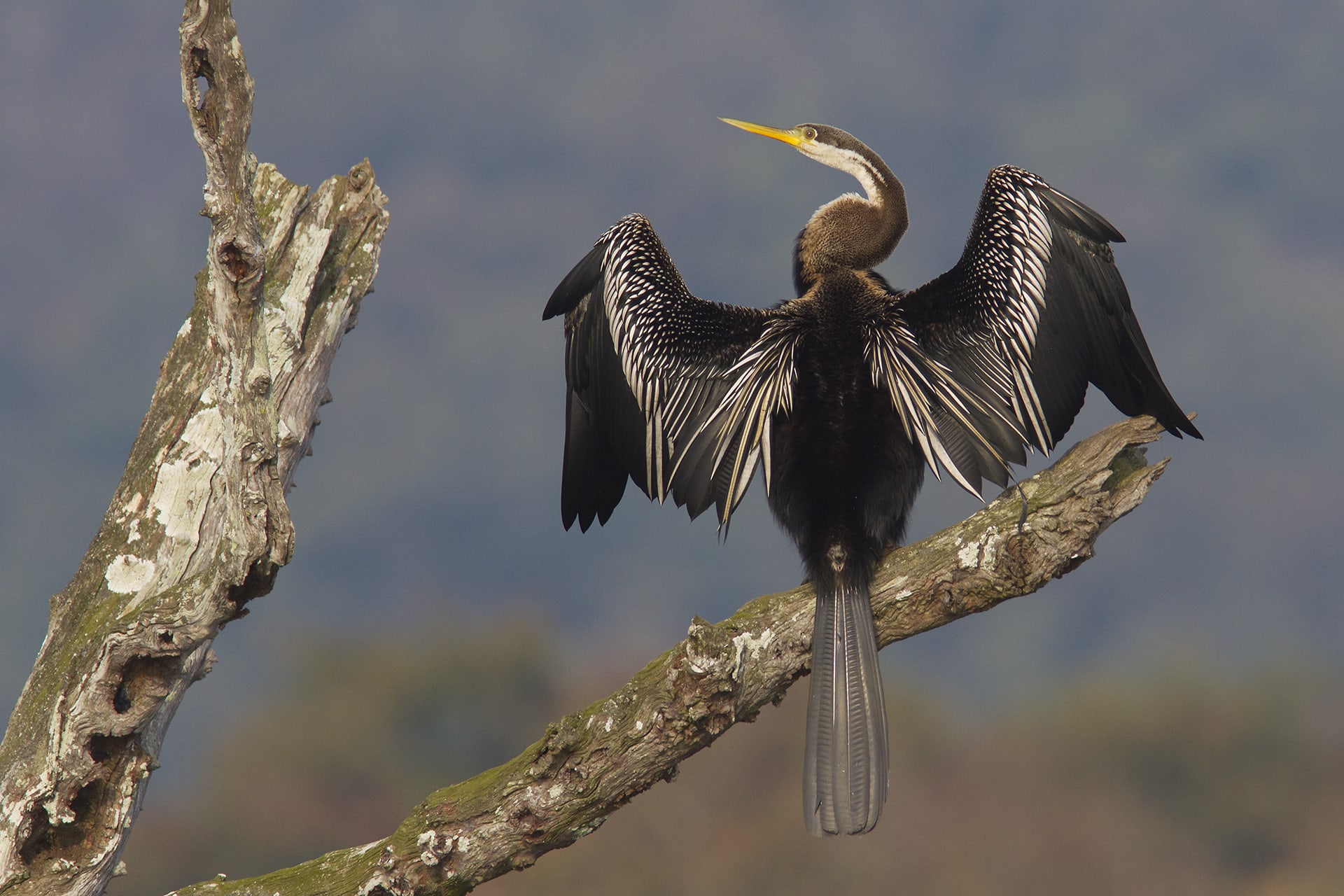 The Bhadra Wildlife Sanctuary is a birder’s paradise. (Clockwise) One can spot birds like Malabar trogons, ospreys, Indian scimitar babblers, and darters that fish in the river, and perch on woody stumps along its banks.

BWS is one of Karnataka’s prominent tiger sanctuaries and is home to over 30 tigers. Chances of spotting one are relatively high during the summer months when vegetation is sparse, visibility is high and encountering them near watering holes is a possibility.

Apart from the tiger, the sanctuary has a rich diversity of wildlife and it is fairly easy to come across ungulates such as spotted deer, sambar and barking deer as well as other animals such as elephants, gaur, langur, cheetal, dholes and boars. Relatively difficult to spot are leopards, black panthers or melanistic leopards, Indian giant squirrels, civets and pangolins, among others. Over 200 species of birds have been recorded here and birding enthusiasts can expect to see bee-eaters, paradise flycatchers, parakeets, Malabar trogon, greater racket-tailed drongo and junglefowls. March to May is the season for river terns.

The sanctuary is open throughout the year, but each season has its own attractions.

Summer begins early in March and lasts until May; it gets quite warm during the day, but early morning safaris in the sanctuary and on the water are not uncomfortable. Peak temperatures are known to cross 35 degree Celcius. But this is also the best season to see river terns.

Monsoon begins in early June and lasts well into September, turning the sanctuary lush and green and incredibly beautiful, though wildlife sighting is considerably less.

Winter begins in November and continues well into February. Temperatures are known to drop to the low double digits, especially in the morning and the sanctuary is sometimes ethereal with dense fog.

The Indian giant squirrel is a flamboyantly-coloured, tree-dwelling rodent that rarely sets foot on the ground. It is known to take large leaps to get from tree to tree.

Timings: The park is open through the year but there might be temporary closures during very heavy rainfall during the monsoons. Safaris are conducted twice a day — 6 am to 8.30 am and 3.30 pm to 6 pm.

Cost: Safaris are organised only by the Karnataka forest department; no private vehicles are allowed. Slots are usually booked through the hotel. Rs 400 per person, six people in a vehicle.

By road: BWS is located in Karnataka’s Chikmagalur district, about 285 km to the northwest of Bangalore.

By train: The nearest railhead is at Bhadravathi (25 km or 30-45 minutes by road) which is well connected by trains from Bangalore.

River Tern Lodge, by state-run Jungle Lodges and Resorts is the most convenient place to stay, and access the sanctuary, for both safaris. Its 15 cottages and 8 log huts have similar accommodation and are scattered over lush greenery with stunning views of the reservoir. Rs 6142 per person per night on twin sharing basis; includes all meals, one safari, one boat ride and birdwatching. (https://www.junglelodges.com/river-tern-lodge/)080 40554055)

Valley of Birds Homestay is surrounded by greenery at the foothills of Kemmangundi and offers simple and comfortable facilities. Jungle evenings are made fun with a barbecue and bonfire. Rs 2500 per person per night inclusive of all three meals. (https://www.valleyofbirds.in/; +91 9481193152)

The Last Resort, Chikmagalur, is set in lush gardens of ferns and trees with spectacular views of the surrounding hills and forests, and has 21 independent cottages with several facilities. A plethora of sports and activities, nature walks and campfire are on offer for guests. Rs 1300 onwards per person per night inclusive of all three meals.   (https://thelastresort.in/; 91 8261 258148) 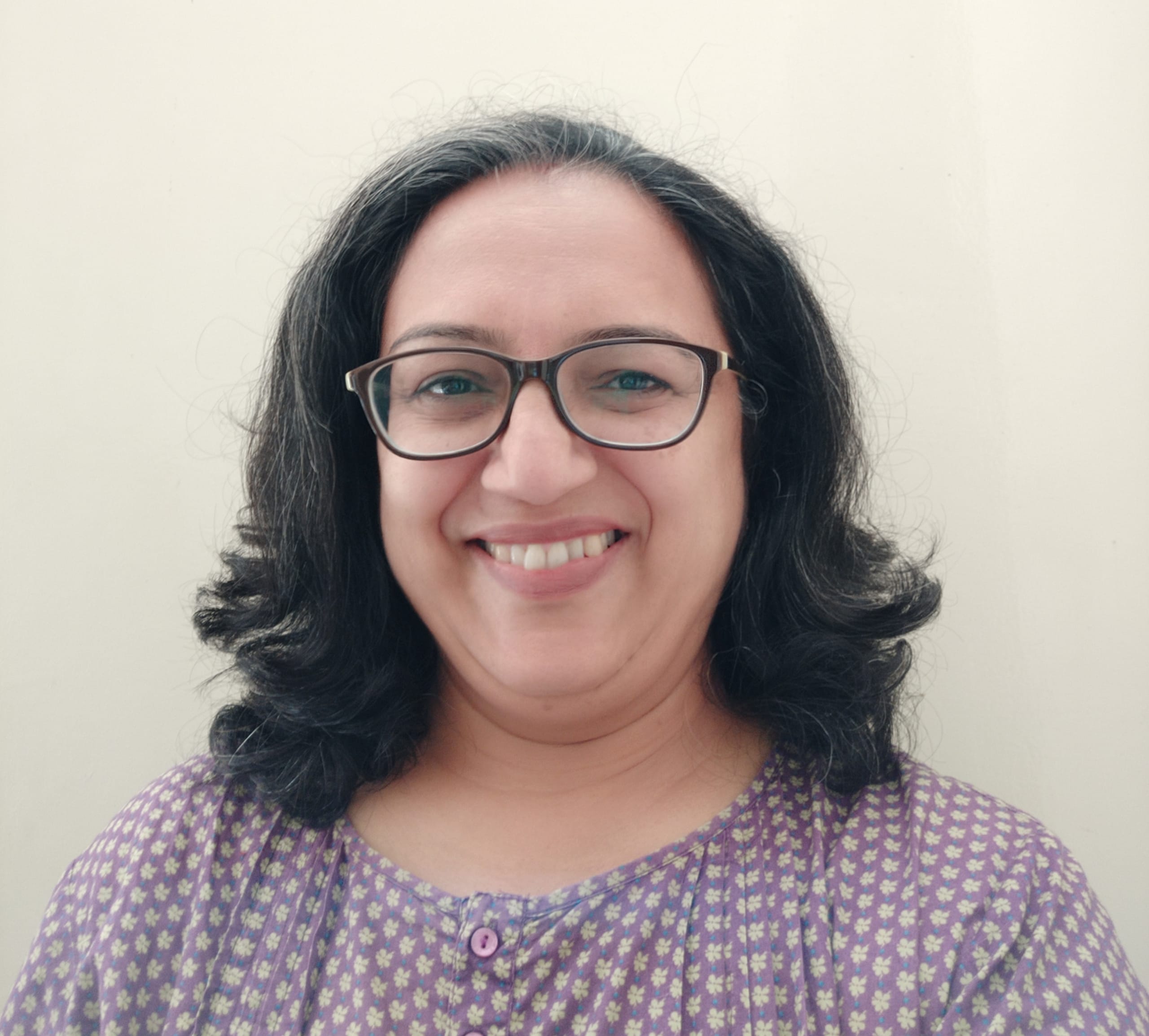