The Queen of Jhalana is Dead, Long Live the Prince

The tigers of Jhalana may be a distant memory, but the leopards are just as worth saving

The late Maharani Gayatri Devi of Jaipur was famous for her beauty but not many people know that she was an ace hunter. In 1943, she shot the last known resident tiger in the jungles of Jhalana — a female with five cubs. As my friend Dr MK Ranjitsinh, former bureaucrat, writer and India’s foremost conservationist put it dramatically “Those were the days of shikar. If you see a tiger, you shoot it. What else can you do?” When it was realised that the tigress must have a litter, a frantic search was made to find her cubs lest they perish of hunger or killed by a predator. Several days later, five hungry cubs were found in a cave, huddled together for comfort, unaware that their mother, the Queen of Jhalana, would never return. The cubs were brought to Jaipur, but three soon died while the remaining two, a male and female, survived in the Jaipur Zoo for many years. After the death of the tigress, a few iterant tigers were noticed but soon they also vanished as the forest started shrinking, as the neighbouring city of Jaipur ate into it. Had it not been declared a reserve forest in 1962, the expanding city of Jaipur would have gobbled up the remaining forest.

When the tigers finally disappeared in the mid-1960s, the leopard, the prince of the Indian jungles, took over the Jhalana forest. Tigers and leopards do not share the same territory. The tiger is a mortal enemy of its much smaller cousin, not due to blood lust but due to the competition over prey. Most predators do not like competitors. Although a tiger can kill much larger animals such as the gaur, sambar or nilgai male, a leopard competes with it for the smaller cheetal, hog deer, barking deer, wild boar, antelopes, and hares. Even in Africa, the lion is a mortal enemy of a leopard and is known to kill leopard cubs if it finds them.

The Jhalana Reserve Forest is barely 10 kms from the bustling, and rapidly expanding city of Jaipur, seen in the background. Photo: Dhritiman Mukherjee In India, the leopard is found in every habitat except Thar deserts and the mangroves of Sundarbans. Cover Photo: Surendra Chouhan

For almost 40 years, the forest department was fighting a losing battle to protect Jhalana from the land sharks. Many rich people wanted to build houses amidst “nature”, ironically after cutting down the trees!

Former chief minister of Rajasthan and a royal by birth, Vasundra Raje, came to the rescue. In 2018 the 23 sq km surviving forest was declared Jhalana Leopard Reserve. Though Mumbaikars pride themselves on the leopards seen in the Sanjay Gandhi National Park, Jhalana is perhaps the first leopard reserve of India. 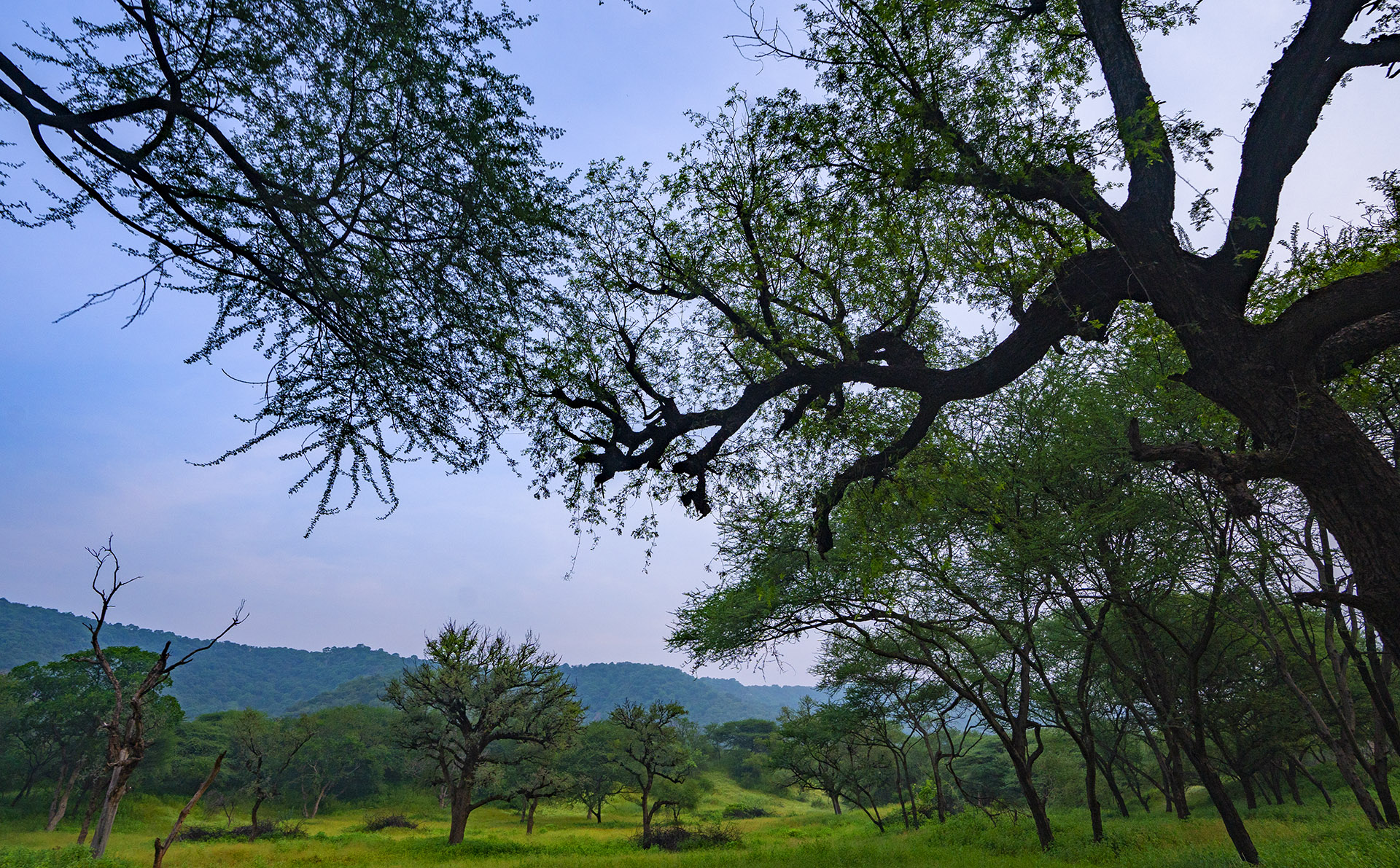 Once it rains, the Jhalana forest floor transforms into carpets of emerald green with freshly-bathed trees swaying in the gentle breeze. Photo: Dhritiman Mukherjee

Recently, I visited Jhalana with photographer Dhritiman Mukherjee and was amazed to see its biodiversity. The lush tropical forest was green thanks to a good monsoon and peafowls and grey francolins were everywhere. During the two-and-half hour morning drive we did not see a leopard but that was fine with us — we were satisfied with the thought that at least 5-10 leopards must have definitely seen us!

Just after a fresh batch of showers, the peafowl spreads its feathers and dances to celebrate the monsoon, and attract a mate. Photo: Dhritiman Mukherjee

Jhalana has about 40 leopards in 23 sq km — that is approximately two leopards per square kilometre. How do they survive in such a high density with scarce prey? No problem. A steady stream of stray dogs from Jaipur city does not allow them to go hungry. Leopards have a wide palette and are highly adaptable. They also hunt peafowl, francolins, nilgai, langurs, rhesus macaques, rufous-naped hare, rats, python, and even tiny squirrels.

A nilgai and a herd of langurs bask in the evening sun at Jhalana Forest Reserve. Photo: Dhritiman Mukherjee

Surendra Singh Chouhan, a mechanical engineer by training, and an officer in the department of transport, Government of Rajasthan, has spent five years (2013-2018) clicking amazing photographs of leopards, resulting in a wonderful book Jhalana: Land of Leopard, published by the Rajasthan tourism board and Toursim and Wildlife Society of India. Like others, he started with tiger photography but once he saw the leopard of Jhalana, he abandoned the king and embraced the prince. He has images of 36 leopards, each identified by different head shape and arrangement of spots. Interestingly, they have been named based on their behavioural traits and physical features. While ‘Madhuri’ and ‘Cleopatra’ are extremely good looking, a muscular male is called ‘Rambo’. ‘Pooja’ gets her name perhaps because she frequents the numerous temples that dot the periphery of Jhalana. For some it may seem like anthropomorphism to name wild animals but for passionate conservationists like Chouhan, each leopard is like a family member to be recognised and loved.

A leopard is a solitary animal, who rests in the day, and spends its nights hunting for prey. Photo: Surendra Chouhan

Unfortunately, not much scientific work has been done on the leopards of Jhalana. The forest is like an oasis in the sea of humanity, with a tenuous connection with the much larger Nahargarh Wildlife Sanctuary. We need to know how the leopards interact with each other in such a dense population, the range of each leopard, their dependency on dogs, and interaction with hyenas. Cheetal numbers are very low, may be less than 20. There are some good cheetal habitats in Jhalana. Can we introduce some cheetal from other areas? Lack of sufficient food brings leopards out of Jhalana, resulting in fatal road accidents. The forest department has built a tall wall between the forest and the road with a wire fencing at the top, but Chouhan’s photographs show that leopards easily climb the wall. At night, many people have seen the leopard in nearby colonies. Fortunately, no Jhalana leopard has killed a human till now, but we cannot wait for this to happen. I also saw many unpalatable plant species — the result of extensive livestock grazing prevalent before the forest was declared a reserve. Can we eradicate such species to allow palatable species so more ungulates can live in the area? A high number of leopards does not mean that they are living well. A leopard is happier stalking a cheetal or a barking deer than a large angry male nilgai, or going for a small squirrel.

The queen is long gone. Let us make Jhalana a more liveable place for the prince so it does not have to go out looking for stray dogs. Let us preserve its noble reputation.