In Search of One Hundred Rhinos in Kaziranga National Park

I see the greater one-horned rhino everywhere. On my way from Guwahati airport to Kaziranga National Park, it is on airport advertisements, travel itineraries, delicately embroidered sarees, T-shirts, teashop fronts, highway signages and an odd hand-painted ‘Save Our Rhinos’ hoarding outside a hair salon. “We Assamese are proud of two things — tea and the rhino,” my taxi driver says. “A rhino’s death can shake the state government.”

Set in the Brahmaputra’s floodplains in Assam, the 430-sq-km vast Kaziranga National Park is famous for bringing the greater one-horned rhinoceros back from the brink of extinction. According to the 2018 census, the park has a thriving number of 2,413 rhinos, up from only about a dozen in 1908. Despite serious poaching and environmental threats, it remains India’s most successful conservation story and Assam’s pride. By the time I reach the gates of the park, the anticipation to see the real thing is unbearable. But Jayatu Choudhury, a spirited 22-year-old engineer turned guide and wildlife rescuer, is cool as a cat. “We will see the rhino at least 20 to 30 times. How many times do you want to see it? Hundred?” he chuckles.

We drive through the entrance, through a dark forest, over a wooden bridge to reach rolling, strikingly green grasslands. A green-billed malkoha — bluish-black bird, with a long tail and a blood-red eye patch — flies across the road. Heeding its cue, Choudhury parks his jeep, and I pull out my binoculars. The chief protagonist of the park, the greater one-horned rhino, is standing only about 100 metres away.

The world’s largest population of the greater one-horned rhino can be found in Kaziranga National Park. According to the 2018 census, 2,413 rhinos live in the park. Photo: Udayan Borthakur

I stand transfixed, and the beast stares back at me — its grey, leathery skin stretches tight over a protruding rib cage but turns soft and pinkish as it creases and folds over its shoulders and hips. With a distinct horn on its broad head, and armour-like coat, the beast looks ready for battle — but instead, unperturbed, goes back to grazing peacefully. “Some tourists look at the rib cage and wonder if we are starving the rhino,” laughs Choudhury. A flock of mynas flutter around its thick pockmarked legs, pecking at insects. In a couple of minutes, we see another rhino at a distance. And then another. We drive a little further, and Choudhury spots a hulking tusker settling in a swamp for a mid-day soak. About another hundred meters away, we see large, crescent-shaped horns and wet nostrils of a deathly-still water buffalo, sticking out of a water-hyacinth-ridden lagoon. It has been less than an hour in the park, and we have seen many rhinos, elephants, water buffaloes, herds of eastern swamp deer, eagles, owls and owlets, a monitor lizard and several wetlands birds. Choudhury’s quip of spotting a 100 rhinos over my week-long trip does not seem far-fetched anymore. 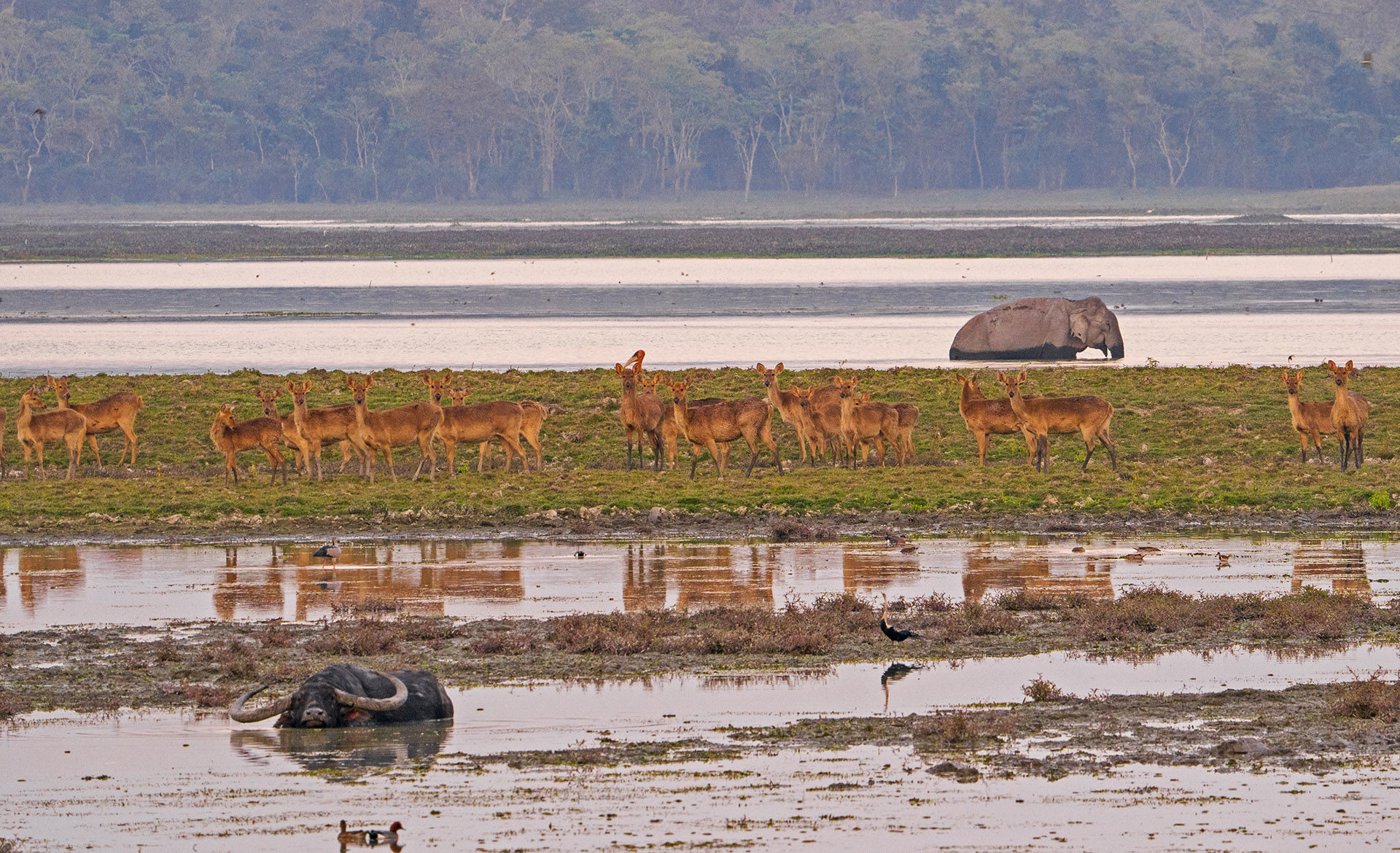 Kaziranga National Park is an immense expanse of rolling grasslands, interspersed by dense tropical semi-evergreen, moist deciduous and wet evergreen forests. Four rivers, including the Brahmaputra, cut through it. Numerous shallow freshwater, flood-formed swamps or beels fringed with reeds, central to the park’s rich biodiversity, dot the landscape. Traversing through this soaking wet park is not an anxious chase to the see a rare or elusive animals. The urgency of speeding safari jeeps cornering a single charismatic mammal is thankfully missing. Instead, it is a calm, immersive ride through an abundant, giving wilderness that hides very little.

The park is generous on the first day of my visit. The sky is crisp and clear, and cotton tufts from the red silk-cotton tree dreamily float with the breeze before settling on dusty roads, and swamps. We drive through looming elephant grass to the steady rumble of an open-air jeep and the gentle lilt of birdsong. And then we wait, a lot. We park the vehicle and wait for pied hornbills to return to their nests. We gaze at a family of tokay geckos — slithering grey reptiles with red polka dots — huddled in a dark, narrow crack of a sal tree. “Each of these geckos can fetch up to seven lakhs in the black market,” adds Choudhury. I suppress squeals as we spot otters playing on a slow-flowing nullah.

Time stops in Kaziranga. Choudhury tells me many stories. Of living on the edges of a remarkable forest, of losing a father, a former forest guard, on duty, and of wanting to return to the same roads despite a competitive degree and a keen awareness of the risks involved. 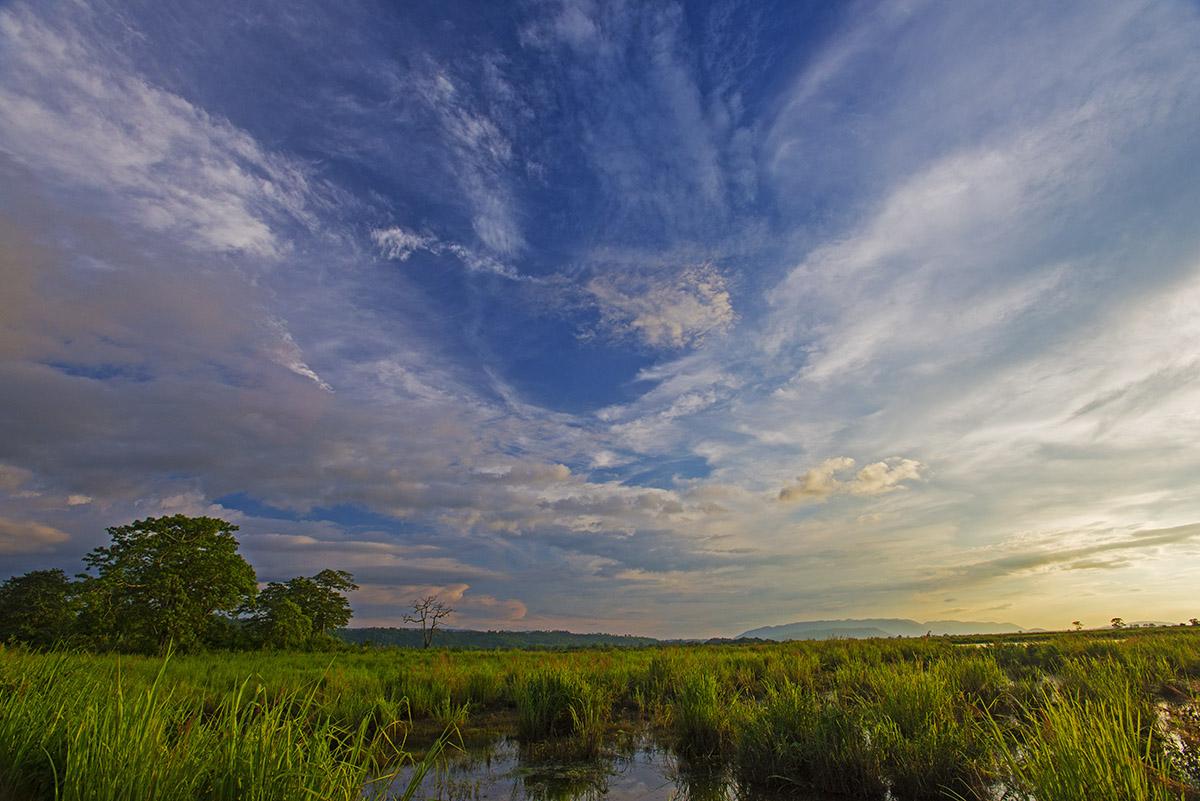 Kaziranga National Park’s soaking wet landscape is dotted by numerous waterbodies or ‘beels’ that are replenished by the flooding Brahmaputra every monsoon. Photo: Dhritiman Mukherjee

Several guides, like Choudhury, will readily tell you a story of how over a hundred years ago, Lady Curzon, wife of the then Viceroy of India, Lord Curzon travelled to Assam in search of the rhinoceros but saw none. Convinced that the animal was heading for extinction, she urged her husband to secure its habitat. In 1908, the park was declared a reserve forest. However, imperial polices had little on wildlife conservation. Only in 1974, under the Assam National Parks Act, 1968, the park received the highest legal protection. In December 1985, the original core area of 428 sqkm was declared a Unesco World Heritage Site. Today, it is inhabited by the world’s largest population of greater one-horned rhinoceroses. It also has many endangered species including Asian elephant, wild water buffalo, sloth bear, eastern swamp deer, sambar deer, hog deer, capped langur, hoolock gibbon, and gaur. In 2007, the park was declared a tiger reserve. Latest estimates show that the park has the highest density of tigers in the world —104 in 2017, up from only 83 in 2014. 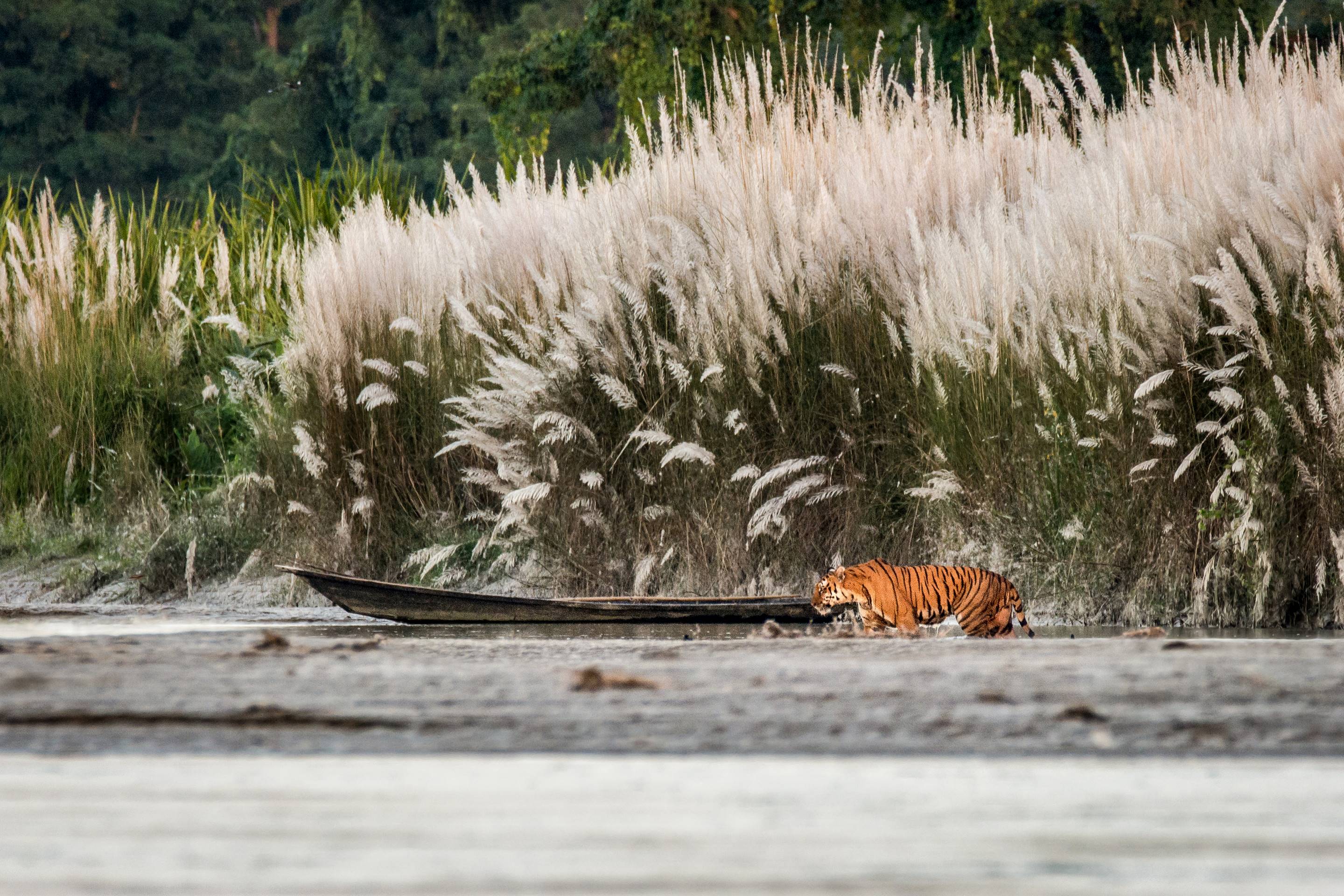 According to a census conducted in 2017, Kaziranga has the highest density of tigers in the country. However, spotting one of this elusive creatures in the tall grass is rare and a matter of chance. Photo: Nejib Ahmed

The park falls en route the Australasia and Indo-Asian flyway which means the park’s wetlands are an important stopover for many migratory bird species. Additionally, it is a part of the Indo-Burma Biodiversity hotspot, one of the planet’s most biologically rich and diverse regions. Constant efforts by the forest department and support from the Centre, state and non-profit organisations have ensured that Kaziranga is seen as a successful conservation story. The park is surrounded by human settlements on three sides. Rhino poaching, increasing vehicular traffic, unplanned development of tourist hotels, and the spread of invasive species pose a serious threat to the habitat and all its life forms.

The Brahmaputra forms the northern and eastern boundaries of Kaziranga National Park. Every monsoon, the river overflows and floods two-thirds of the park. Photo: Sanghamitraneogsaikia-CC BY-SA 4.0

However, what sets Kaziranga National Park apart is its complex, tumultuous relationship with the mighty Brahmaputra — a river so large that it is often called ‘the moving ocean’. The park lies in the floodplains of the river, and every monsoon the Brahmaputra swells and swallows more than two-thirds of it. Flooding is as natural and common in Kaziranga as the monsoon itself. The flood sparks a series of spectacular natural processes. Fish and minerals in the swamps are replenished and a cycle of erosion and sedimentation forms new highlands and waterbodies. “Kaziranga is an extremely dynamic landscape that transforms every year, and we don’t have the resources to understand how the park is changing entirely,” says Rohini Ballav Saikia, Divisional Forest Officer, Kaziranga National Park. “But flood supports all life here. It can be devastating, but Kaziranga would not exist without it.” When the flood arrives, thousands of animals migrate to the highlands and hills of Karbi Anglong across a busy NH 37, and several become roadkill. Choudhury tells me how young men who depend on the park for their livelihood line up on the highway to warn speeding vehicles of animal crossings. By October, the monsoon ends, and the beels are flushed and washed and replenished with fresh water. As the Brahmaputra retreats, it takes all that is bad and toxic with it — dead animal carcasses, weeds, and waste — and Kaziranga welcomes back the animals that it drove away. Rohit Chaudhury, environmental activist and a romantic at heart, says Kaziranga tests your love. It demands a lot from all its residents, both animals and humans. “Kaziranga is constantly changing. Every time I walk into the park it looks different,” he says. “But that is the beauty of it.”

On my last day, Kaziranga is unrecognisable. Its mood has flipped. The thundering rain has drowned the summery chirping of birds. We can only hear the Indian coucal’s repetitive ‘coop-coop-coop’ cut through the rumbling threats of dark, pregnant clouds. To my great disappointment, the forest authorities have closed the route that leads to the Brahmaputra. Our jeep gets stuck in muck several times on our way out. As Choudhury struggles over pot-hole ridden roads, we spot another rhino, hidden in elephant grass a few feet from the jeep. “Are you keeping count?” he smirks.