Life of Corals: The Origin Story

The brilliant corals we see at the bottom of the ocean are animals, the most extraordinarily wild architects on earth, and they use stinging cells to capture their prey

I emerged at the ocean’s surface, coral measuring tools in hand, and a mind fully boggled. After months of diving in the same coral reef, I was still seeing corals I hadn’t seen before. This last one, Mycedium sp., was hidden under a rock and required me to hover upside down to be able to see it entirely. Its psychedelic green and blue hues had a texture I cannot begin to describe. I distinctly remember thinking to myself ‘how could this be real?’

For a researcher studying corals, ‘fieldwork’ did not necessarily have to end after stepping onto land. I spent hours looking at corals on my computer after every dive. Measuring coral data and ecological variables through photographs became a virtual dip into the sea. It let me carefully relive each dive more than once, and get a much closer and non-intrusive look at bizarre animals like the Mycedium once more.

Over the years I have realised the urgent need to talk about corals with people outside the scientific community. Coral reefs might be home to 25 per cent of all known marine biodiversity, 500 million people depend on them for survival, 90 per cent of it might disappear from the face of the earth by 2050 due to climate change, and yet how many of us know what corals are?

For centuries, sea farers were wary of corals, for fear of wrecking their boats over their mysterious stony structures. Photo: Umeed Mistry Coral cities are a dynamic, constantly changing environment built through forces of competition, cooperation, and tolerance. Cover Photo: Umeed Mistry

The oldest coral fossils date back to 535 million years ago. Corals similar to what we see today appeared 295 million years later, around the time of the early dinosaurs, marine reptiles, ferns, and conifers. It is equally fascinating to track the evolutionary history of our understanding of corals. Aristotle’s pupil Theophrastus (c.372-c.285 BC) puzzled over what he called the ‘kouralion’- a ‘root-like’, mineralised creature whose identity he felt lay somewhere between a plant and an animal.

Naturalists 2,000 years later continued to debate on whether corals were shrubs that turned into stone when exposed to air. Corals in the 16th and 17th centuries were of great concern to voyagers who dreaded having their boats wrecked by dangerous formations that appeared seemingly out of nowhere in the ocean. Trading of these strange stone-forming ‘gems’ became extremely popular during this time, especially the red coral (Corallium rubrum).

Today we know for a fact that corals are animals, related to jellies, anemones and others in the phylum Cnidaria that use stinging cells to capture their prey. With a few exceptions, corals are typically sedentary colonies made up of individual ‘polyps’. Each polyp looks like a soft cavity with a rim of tentacles lining the mouth to catch plankton.

A coral colony, like Acropora sp. pictured here, is a continuously growing assembly of individual coral ‘polyps’, each with a flower-like ring of stinging tentacles, living in a cup of limestone of its own making. Photo: Umeed Mistry

We learn about symbiosis and mutualisms in nature very early on in school — flowers feeding insects with nectar benefit by getting pollinated, birds and mammals dispersing plants by pooping the fruits they eat in distant places. How often though do we hear of such stories from the ocean, which is filled with examples of cooperation. 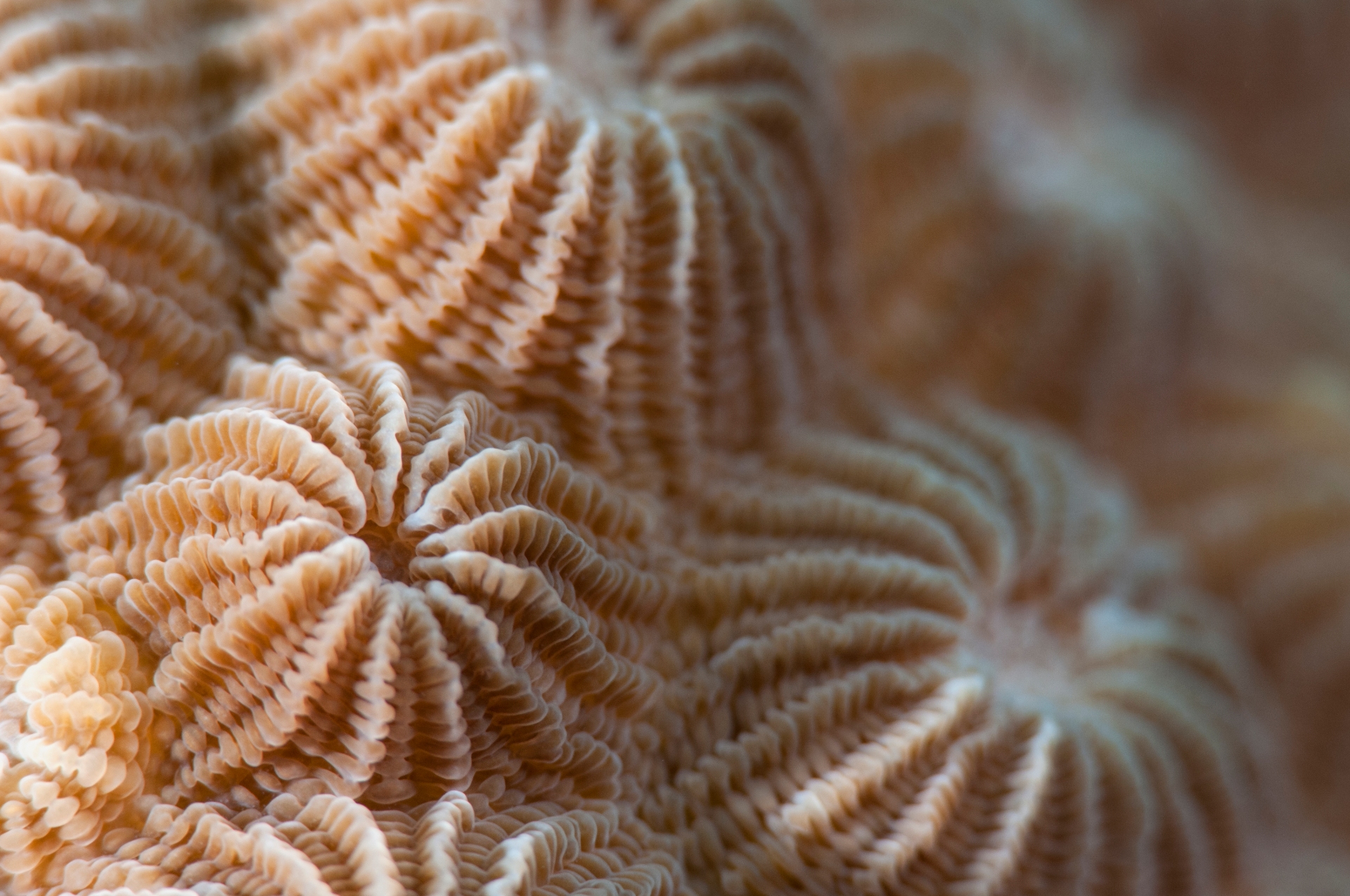 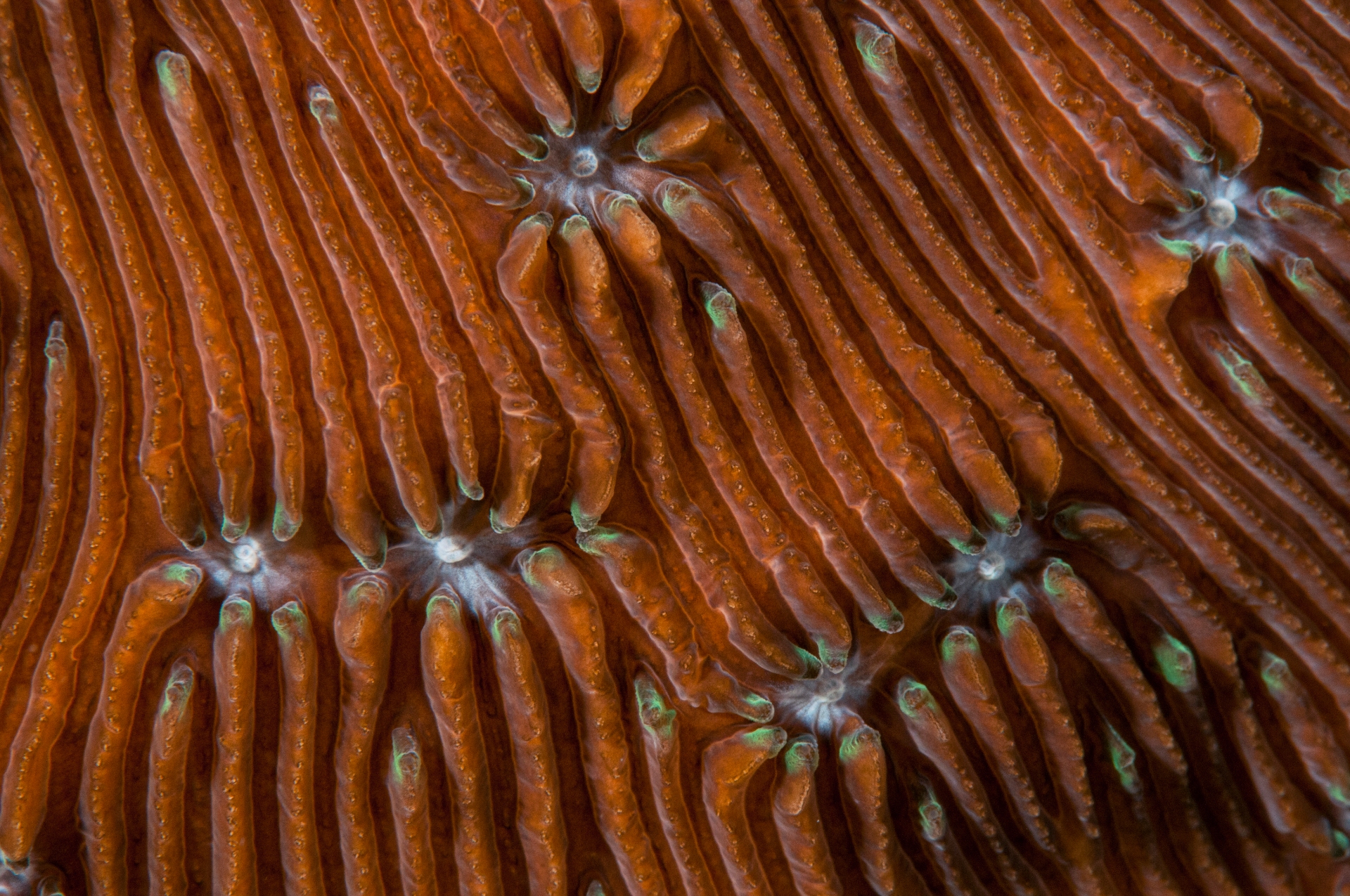 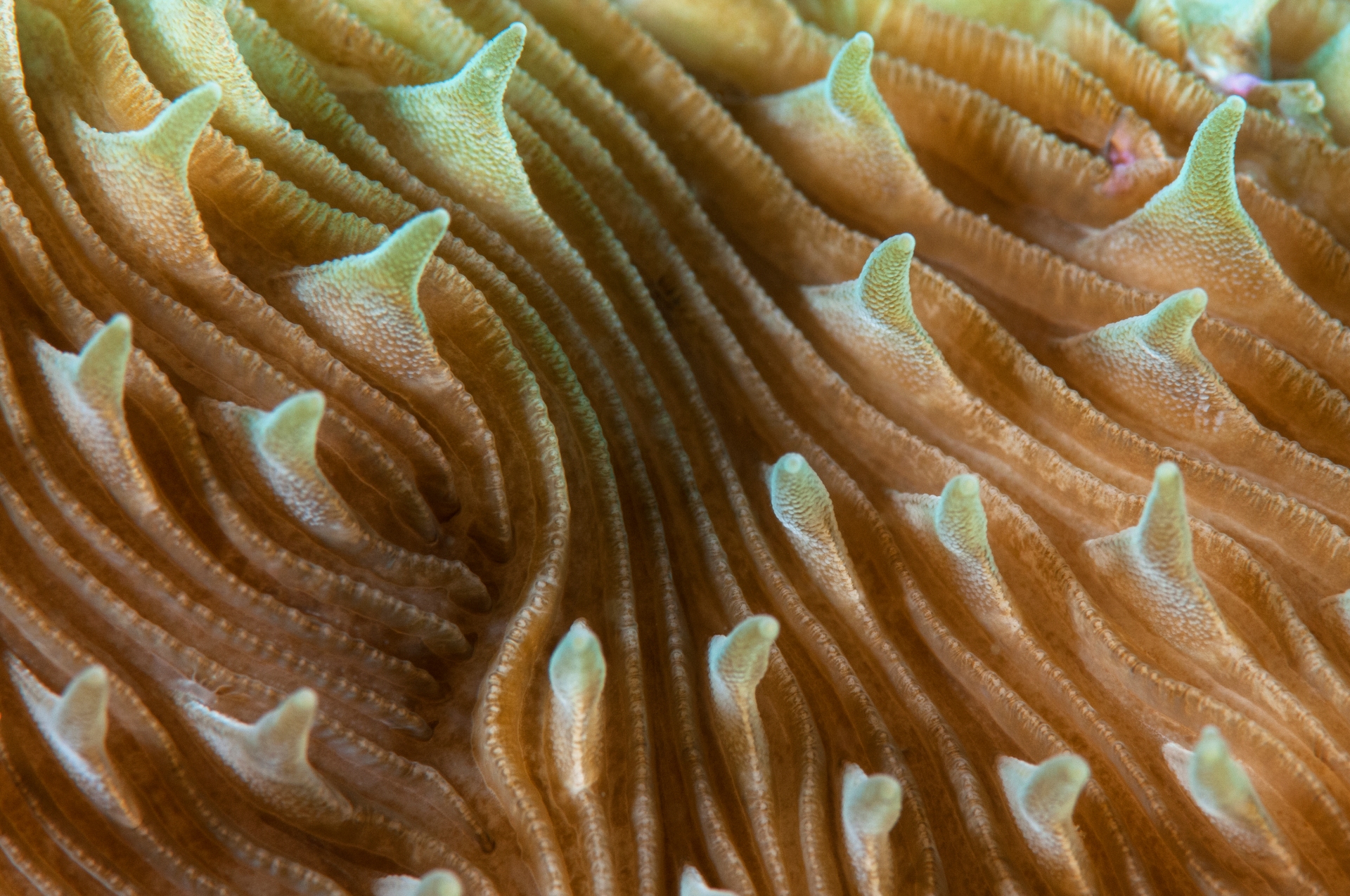 While appreciating the colours, patterns, and textures of corals, it’s easy to forget that we are looking at wild animals and not a tapestry of exquisite art. Pictured here from top are Diplostrea sp., Pavona sp. and Fungia sp. Photos: Umeed Mistry

If you look into the ocean and find colourful formations attached to the bottom, studded with numerous identical, repetitive units in brilliant shapes, you are probably looking at corals. They are some of the most extraordinary, wild architects on Earth. Polyps of many corals build exoskeletons of limestone for protection, inadvertently creating a foundation for an entire ecosystem to thrive on. The coral formations of the Great Barrier Reef alone are extensive enough to be seen from space. A feat made possible only through the tireless and longstanding partnership between coral polyps and millions of single-cell algae (zooxanthellae) that live hidden in their tissues.

Through photosynthesis, zooxanthellae provide up to 90 per cent of the energy corals need to survive and grow. In exchange, a coral polyp serves as a safe house for these algae where they are also constantly supplied with nutrients from its metabolism. Corals owe their brilliant colours to their in-house algal partners who impart their pigments onto corals, which would otherwise appear white. Another consequence of this symbiosis is that reefs built by these corals are invariably shallow where light is aplenty, not for the coral animal, but for the zooxanthellae they harbour.

Light demanding hard corals like the Acropora sp. search for space, growing over each as branches and plates. Photo: Umeed Mistry

An interesting twist in the story here is that not all corals are ‘hard corals’ that build skeletons of limestone around their polyps. There also exist corals that do not necessarily depend on zooxanthellae and can be found in poorly lit waters. This is the world of soft coral, black coral, sea fans, sea whips, and sea pens. One of my favourite things to do on a dive is swim through the gorgeous mazes of sea fans and soft corals that occupy slightly deeper reefs. Swaying, or sometimes dancing, these corals are flexible and much less rigid than hard corals, are supported by skeletons made of spicules instead of limestone, and have eight tentacles lining their polyps. Hard coral polyps have six tentacles per polyp, a helpful tip for explorers!

Sea fans and soft corals have skeletons made of spicules and can be differentiated from hard corals in having eight tentacles on each polyp, instead of six. Photo: Umeed Mistry

Even the most extravagant and ancient of coral structures needs to start with a humble ‘spat’. A single nascent polyp that survives the tumultuous journey of drifting with the ocean currents until it finds itself a stable surface to settle on. This coral spat will begin to grow an inch a year, not just by laying calcium walls, but also by budding into clone polyps. Soon a colony will be formed, alongside colonies of others. In a three-dimensional environment, there is room to grow in every direction and yet each colony has to constantly defend its boundaries. Light demanding hard corals search for space in the shallows, growing over each other as branches and plates; boulder corals grow steadily on submerged slopes breaking the waves. Sea fans, whips, and soft corals challenge the currents by hanging off steep walls. Through time, what begins to emerge is a coral city that is dynamic and diverse.

A sea fan grows off a rocky wall in a direction perpendicular to the dominant currents, maximising plankton intake while withstanding the force of the water movement. Photo: Umeed Mistry

There are nearly 1,000 species of corals found across the world, building reefs for over millions of years, from the Caribbean and Mediterranean, to the Indian and Pacific Oceans. As with cities, every coral reef has a history and no two reefs will look or behave alike.